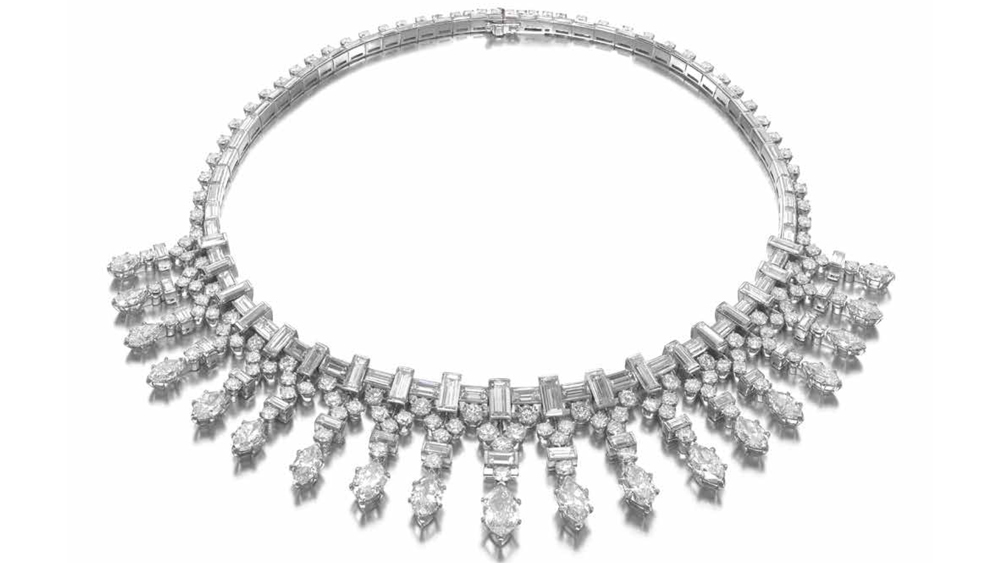 A survey of the most iconic and important 20th Century jewellery designers is fraught with the same subjective pitfalls as any other assemblage of art. In an appraisal of Modernist paintings, for example, is Magritte’s The Treachery of Images relatively more or less important of an artistic icon than, say, Duchamp’s Nude Descending a Staircase No. 2? And so it is with jewellery: On a short list of designers, reasonable people can disagree about the merits of Gérard Sandoz – after all, his career as a gem artist was cut short by a second life as an actor.

That’s why it’s important to ensure that anyone curating such a list of greats is qualified to opine. And Lee Siegelson certainly knows his gems. The third-generation jeweller has spent years assessing, collecting, and selling gallery-quality vintage pieces from the brand’s office on Manhattan’s Fifth Avenue. Louis, Lee’s grandfather, first launched the business in Brooklyn in 1920, originally specialising in watch repair. In the 1940s—with the help of his son Herman (Lee’s father)—Siegelson pivoted and began putting more focus on vintage jewellery. In time, he amassed a spectacular inventory of one-of-a-kind designs. In the global jewellery community, the Siegelson collection is among the most respected. To date, many pieces have been sold to or exhibited in museums—including New York’s Cooper Hewitt and the Smithsonian.

So, who better to walk us through the 10 most iconic, influential designers of the last century than Lee Siegelson himself? The expert will lead a concise crash course in jewellery history—from Calder to Van Cleef, he’ll break down what makes each artist stand out. Plus—what unusual brooch was Jeanne Boivin’s favourite? What did airplane design have to do with Jean Després’ pieces? Trust us, you’ll want to pocket a few of these conversational gems for your next dinner party.

Suzanne Belperron is the single most important jewellery designer of all time. She created an iconic aesthetic of bold curvaceous designs that are immediately recognisable as Belperron. In fact, she is known for not signing her pieces stating, “My style is my signature.” And she is absolutely correct.

Belperron was known for using unusual carved hardstone materials such as rose quartz, rock crystal, and chalcedony as a mounting material for bracelets and rings. She also pushed her workshops to create intricate stone settings for pieces that included a large and varied amount of stone cuts. Each mounting had to be hand created to fit the individual stones.

This bib necklace is an iconic Belperron design composed of a field of irregular ovoid rubies interspersed with diamonds, all bezel-set in platinum. Although the rubies and diamonds appear to be randomly scattered, they were actually placed with great care by the designer, as an Impressionist painter might scatter drops of paint to create a more beautiful whole. The result is a magnificent liquid feeling.

Belperron was and is absolutely revered by fashion designers, editors, and wearers of haute couture. Her pieces have been collected by Daisy Fellowes, Elsa Schiaparelli, Diana Vreeland, the Duchess of Windsor, and Karl Lagerfeld, to name a few. She is the designer most sought after by people who understand clothing and jewellery can be art.

Jeanne Boivin (the principal of Boivin after her husband died in 1917) was fashion and jewellery royalty. She was a female director of the renowned jewellery firm and the sister of Paul Poiret, the couturier who forever changed fashion with his groundbreaking designs in the 1910s and 1920s. Jeanne gave Suzanne Belperron her start and also worked with Juliette Moutard. These three women together created some of the most important jewellery ever designed with a strong sculptural style usually based on nature.

The starfish brooch is the absolute pinnacle of Boivin design, and Jeanne even said this brooch was her favourite. This jewel was purchased by Claudette Colbert, the most recognisable Hollywood star in the 1930s after her Academy Award win for “It Happened One Night.” And she is pictured wearing the brooch in a period photograph.

Millicent Rogers owned a later version and she was pictured wearing it in Vogue. The Boivin starfish was actually pictured in Vogue four times between 1937 and 1945, an unheard-of number of times for a magazine on the cutting edge of fashion.

Cartier has created more great pieces than any other jeweller—in fact their designs often define a particular era or style. There is no material or stone Cartier did not master. The Cartier family dynasty spanned a century with output from affordable silver table pieces to exquisite one of a kind jewelled creation made for maharajas and European royalty.

Cartier hired the best workshops and designers and gave them access to a broad library of art books and Persian miniatures for inspiration. This bracelet would have been purchased by a top client. It is exquisite in both construction and design. The black lacquer makes the form modern, while the three-leaf design gives a nod to exotic decorative styles. The green emeralds pop against the otherwise stark black and white palette and the lustrous pearls are exquisite terminals. Only Cartier could have produced this piece and when you hold it in your hand, you can see there is nothing out of place, it is a perfectly considered and exquisite piece.

Van Cleef & Arpels is known for absolutely elegant confections. They particularly excelled at using unusual stone cuts and design innovations such as the invisible setting, the minaudiere and the zip necklace. The company made particularly beautiful pieces using a marquise-cut they called the navette. This diamond fringe necklace showcases the expert way VCA layered varied stone cuts to accentuate the geometry of the stones and create a stunning construction that is elegant and luxurious and feels modern and wearable today.

From their start in 1858, Boucheron received attention at international exhibitions for their thoughtful, beautiful, bold designs. At the 1925 Paris Exposition des Arts Décoratifs et Industriels the company created a complete design scheme including fitted pink shagreen cases decorated with geometric designs created for the exhibition. (The bracelet owned by Siegelson has the only known remaining box.)

This bracelet, one of the most important pieces of jewellery ever made, was created for the 1925 Paris Exposition. Stephen Harrison, Curator of Decorative Art at The Cleveland Museum of Art, said “Boucheron created an extraordinary bracelet of innovative Osmium set with cabochon rubies, sapphires, and emeralds, arranged as bubbles floating in the water.” The revolutionary design of this piece centers on the geometric arrangement of the stones encircled by diamonds that seem to slip across the surface of the bracelet, sliding under the diamond edge of the panels. Black enamelled rods, positioned diagonally, provide a dramatic foil for the coloured gemstones.

Gérard Sandoz made his fantastic jewellery for only a brief time at the height of the Art Deco period, from 1920–1931. A charming, restless character, he was known to enjoy parties at Maxim’s and eventually left the family business of jewellery making for a modest film career.

The jewellery he made is an absolutely pure exploration of geometric shapes in varied materials, colours, and finishes that combine to create a complex layered shape. There is nothing else like it.

Sandoz himself said, “It’s possible to make very beautiful jewellery simply with gold and to make horrors with rivers of diamonds.”

Centering on a platinum rod passing through a peaked gold rectangle with gold and onyx “teeth,” like those on a gear, this brooch draws inspiration directly from the machines Sandoz loved. The center element is layered on a background of frosted rock crystal on a pave-diamond triangle. In this masterful brooch Sandoz reversed the standard order of materials in a piece of fine jewellery, which typically featured the most precious stones, with metal as a mere mount. Here, Sandoz uses the diamonds as a background, while exploiting the polished gold as the central element. The result is an iconic and important design masterpiece.

Born into a family of jewellers and forever influenced by his experience as an airplane designer during World War II, Després influenced the course of jewellery design with his carefully drafted machine inspired pieces known as “bijoux-moteurs.”

This bracelet by Després is an iconic example of Art Moderne design combining powerful simplicity with machine-inspired design. The design evokes the teeth of a massive gear, while the bracelet tapers to align to the sliming of the wrist. This subtle design adjustment acknowledges that this massive cuff is meant to be worn, and, as is shown in a period photo, is elegant on the wrist.

Jean Dunand is one of the foremost Art Deco designers known for his lacquer furniture, decorative objects, and jewellery. He was hired to lacquer entire luxury rooms on fabulous ocean liners such as the Normandie.

Since Dunand created portraits as well as decorative arts and jewellery, his portraits often contained examples of his work. A famous and exquisite portrait of his mentor Madame Agnes came up at auction recently, and in it she is seen wearing a single giraffe necklace. The Giraffe is an iconic work for Dunand and it speaks to a specific moment in the 1920s when designers began to move away from the classical use of luxury materials toward a more modern design.

A similar model was made for and worn by Josephine Baker, who was Dunand’s muse; she’s shown wearing the set (and little else) in a famous photograph.

Recently returned from a major exhibition, The Jazz Age: American Style in the 1920s, at Cooper Hewitt and Cleveland Museum of art, this is the largest known set with six pieces total. This is a larger example than those owned by the Museé de Arts Decoratifs and Metropolitan Museum of Art. This is the largest set that will probably ever be seen on the market.

Paul Flato was the original jeweller to the stars, catering to the crème de la crème of Hollywood. He founded his company in New York City in 1928 and opened a Los Angeles store in 1937. His figurative style, often bordering on humorous, reached its peak in the 1930s when Adolph Kleaty, George Headley, and Fulco, Duke of Verdura, designed pieces for him. Flato made feathers, hands holding flowers, and brooches that were treasure chests fill of jewels, but with panache.

His salons were frequented by Joan Crawford, Marlene Dietrich, and Vivien Leigh, and leading men Douglas Fairbanks, Laurence Olivier, and Orson Welles. His jewellery was worn by Katherine Hepburn in Holiday, Greta Garbo in Two Faced Woman, and Rita Hayward in Blood and Sand.

For this necklace, Verdura transformed an ordinary utilitarian item, a belt, into a show-stopping aquamarine and ruby necklace. This was a remarkable feat at a time when most jewellery featured flowers or geometric designs. The necklace is cleverly designed to look as though the belt were knotted, creating a piece which can be worn centered or off to the side, as it was in Vogue in 1944.

The Cole Porter Necklace: An Aquamarine and Ruby Belt with a Buckle Necklace Designed by Fulco, Duke of Verdura, for Paul Flato, New York, circa 1935. Photo: Courtesy Siegelson

Alexander Calder is best known for his delicately balanced mobiles and sculptures that move in response to air or touch, but jewellery was his most personal and constant medium. Handmade by the artist, each piece was a unique combination of his hammering and the aesthetic and grace contained in his large-scale works. Calder’s jewellery, bohemian but refined, was collected by fashionable art collectors including Peggy Guggenheim, Mary Rockefeller, and Millicent Rogers.

Created of brass wire, this brooch displays the same sense of motion found in his mobiles and the geometry and dynamism found in his lithographs where he often explored repeated interlocking circles.

Elisabeth Agro, curator of the blockbuster Calder Jewellery exhibition said of the jewellery: “Space. It’s about occupying space. And he just sees the body as a grounding element for this other aspect of his work. Not that the body gets in the way — the body is one part of this larger work of art, when you put it on.”