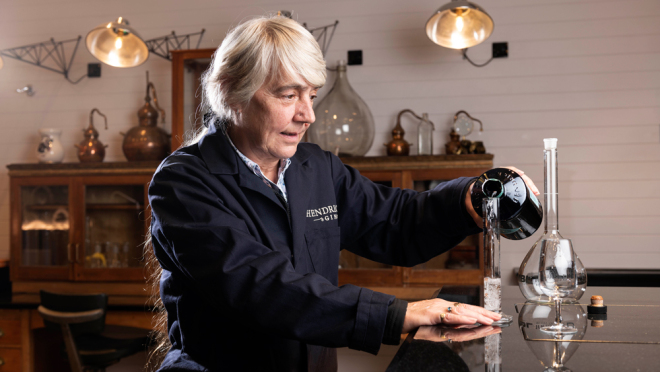 Earlier this month, Hendrick’s Gin saw the arrival of the Gin Palace, a £13.2 million expansion to the Scotland-based distillery that features two new still houses, a walled garden, and two state-of-the-art botanical greenhouses.

For the brand, it means the capacity to produce twice as much gin as before—a necessary advancement considering that in 2017 it sold more than 1 million cases (up from 73,000 in 2007). But for master distiller Lesley Gracie, who has been with the Hendrick’s team since its 1999 inception, it means something else: a chance to exercise some major creativity. “It’s a major step forward in terms of potential for innovation,” she says.

Innovation is something that Gracie knows much about. After acquiring her chemistry degree from London’s Royal Society of Chemistry, she worked with a pharmaceutical company developing new pain-relief drugs designed to treat severe arthritis. “Some of them tasted pretty horrible, so we created ways to make them palatable,” she says.

In 1988, Gracie took that flavour development know-how to William Grant & Sons, where she worked in new liquid development for products like the Balvenie and Glenfiddich. Roughly a decade later, she was tasked with creating a new super-premium gin differ with a makeup of spirits from two kinds of stills (a Carter-Head and Copper pot still) and signature infusions of cucumber and rose petals. Thus, Hendrick’s was born.

Though the Hendrick’s recipe has remained unchanged for 20 years—consistency is something that Gracie holds of utmost importance in her practice—the need to innovate for special releases is paramount to the Yorkshire native, and something she plans to prioritize with the Gin Palace’s new walled garden and greenhouses.

“We can now grow things we weren’t able to before, such as ginger, pomegranates, Buddha’s Hand—the possibilities are limitless,” says Gracie, who notes the importance of spending time sifting through the options. “When I’m gardening, I like to take walks and I’ll often stop to take a leaf and smell it,” she says. “I’ll think, ‘Oh, that’s interesting; that might work really well.’ It’s a process that can really take over me.”

Gracie’s curiousity has led her to seek out flavors far beyond the UK borders. In 2013 she and her team embarked on a scouting expedition to Venezuela, where they spent 10 days with a tribe exploring botanicals that might blend well with Hendrick’s. “I brought a baby 10-liter still with me, and we were extracting and distilling right there in the middle of the jungle,” recalls Gracie, who explains that it was likely a first for the tribe. “I asked the guys on my crew to fetch some water from the river to help keep the still condenser cool, and I remember our host women exchanging glances with a look in their eyes like, ‘Did you see that? She just asked him to go, and he went,’” recalls Gracie. “Women there were typically the ones to get the water.”

It’s that kind of take-charge tenacity that has helped Gracie to maintain her leadership role within the company for three decades now—and between that verve and the recently debuted resources, she shows no signs of letting up anytime soon. “I’ve gotten to become really involved in my work here,” she says. “We now have the space and still capacity and everything we need to keep innovating and innovating, and I can’t wait.”