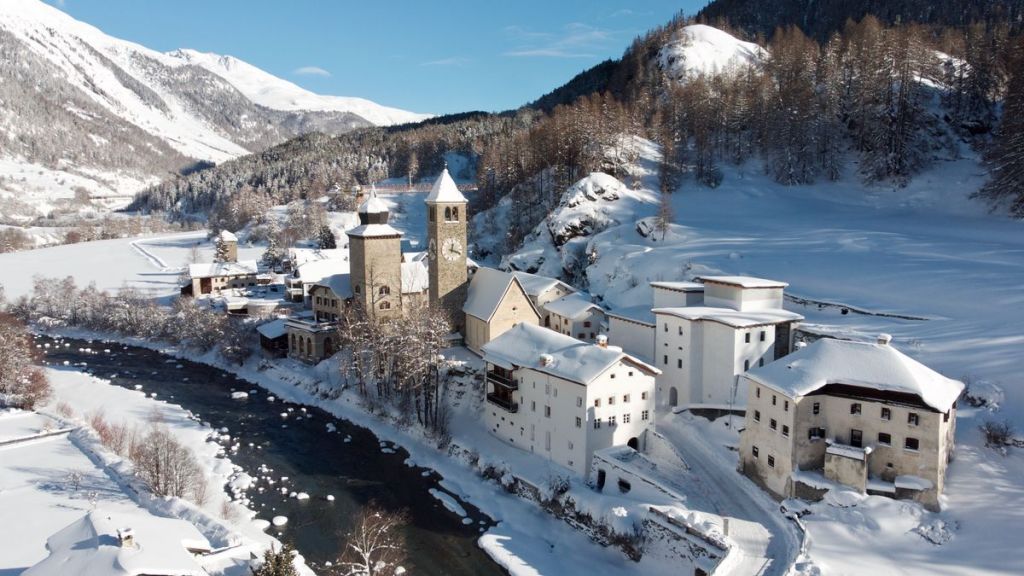 A Ferrari’s purr away from the mink-clad glitz of St. Moritz and the swagger of Davos, something of a cultural revolution is afoot. Sitting in the heart of the Engadin region in Switzerland, the Muzeum Susch opened in January, and is the brainchild of Polish entrepreneur and collector Grażyna Kulczyk. Located in a campus on the site of a 12th-century monastery and former brewery in Susch, the museum shows a number of site-specific works by international contemporary artists, alongside a programme of temporary curated exhibitions. Its inaugural exhibition, Woman Looking at Men Looking at Women, which runs until June 30, explores the notion of feminism in a social, political and cultural context.
The museum is part of a growing art-driven landscape in the Engadin region, offering temptations beyond the Cresta Run and snow polo. Von Bartha has a satellite space in nearby S-chanf and Hauser & Wirth opened an outpost in St. Moritz in December 2018, with other galleries such as Vito Schnabel in the upmarket ski town providing a lure for collectors.
Kulczyk is one of Poland’s most successful businesswomen with her collection considered to be one of the largest of its kind in Europe. We caught up with her around the opening.

Why did you decide to open the museum?

I have been engaged in different art activities for the last 45 years. Even as a law student I began giving a lectures about contemporary art. Since then I have supported hundreds of various art projects, later introducing my life motto of 50 per cent art, 50 per cent business to structure my engagements into coherent actions taking place at Stary Browar, the eight-hectare former industrial block that I restored in the centre of my hometown Poznań to allow people to see art in the public spaces. Here in the Swiss Alps I have decided to focus on art only but in the very large sense. Muzeum Susch overall hosts five pillars: exhibition spaces, a research institute, a choreography centre, artists residency and an annual academic symposium.

Was it a lengthy process finding that interesting site?

I have lived in Engadine for 10 years so I had enough time to get to know this spectacular region, which can be simultaneously dramatic and picturesque. Four years ago I was still planning my main museum institution in Warsaw when I realised that I would spend years on administrative fights, whereas making an art post in a smaller place I could focus all of my cultural activities here and build a place just as strong due to its ambitious programme and a unique architectural beauty to attract visitors from all over the world.

You have said coming to the museum should be a kind of pilgrimage. Can you elaborate?

I started thinking of the essence of the word from the moment that I started to communicate on the creation of the museum that was to be housed in a restored and enlarged former monastery complex. A pilgrimage is a demanding act as it is not only going from A to B but it needs devotion to do so.  For me art has a very sacred texture, so pilgrimage became an obvious means of describing it.

Muzeum Susch is unique in the combination of its location, physicality and outlook; yet there are some inspirations to name, such as Japanese Island Naoshima, Kaviar Faktory in Henningsvær, Norwa and the Glenstone museum in Potomac, Maryland.

Do you hope to open more?

I have invested not only a significant amount of money over here but also invested my heart and all my attention. It is relatively easy to build a building, but then the art is about creating the very strong institutional program resistant to time and to be able to engage people for decades. The answer is simple: This is my final destination for art.

What first sparked your interest in art?

As a student, the only art I could truly collect were posters, and Poland a few decades ago created a very specific poster school called the Polish School of Posters, which was highly regarded as an art form.

What was the first one you bought yourself?

I do not remember exactly the first artwork I bought, but I can tell you what was my first auction-house purchase was. I remember it because it was not only the calibre of artist, but [how] it broke the line for a person from behind the old Iron Curtain.

Can you describe more about what the symposium will entail?

We named the annual symposium, the same as the other foundation pillars, in Rumansch (the locally spoken dialect)—Disputaziuns Susch. Once a year it brings together scientists, artists and thinkers to talk together and to come up with potentially contradicting but still complementary interpretations and explanations of the world we inhabit. The first Disputaziuns Susch in 2017 named “On Reformation and Standards of Thought”, took the 500th anniversary of the Reformation as a starting point. Disputaziuns Susch 2018 was called “Do they dream of electric sheep?”—challenging beliefs and re-examining assumptions about artificial intelligence.

And how will the institute explore gender exactly?

The Women’s Centre for Excellence is a research project between the Art Institute at the FHNW Academy of Art and Design in Basel and Instituto Susch, a joint venture from Grażyna Kulczyk and Art Stations Foundation CH, the umbrella organisation overseeing the programming at Muzeum Susch. It is conceived as a think-tank tasked to assess, develop and propose new social languages and methods to understand the position and the role of women in arts, science and technology and to discuss crucial historical and current questions.

Contemporary dance will feature at the museum. Have you always had an interest in this?

Since art is a complex interdisciplinary matrix of a “Gesamtkunstwerk” [total work of art], I can only quote [American choreographer] Trisha Brown, who said, “Choreography is in the crack between visual arts and traditionally understood dance.”

How is the way that art is displayed/viewed changing do you think?

Art has come a long way, being displayed/viewed in so many ways – from religious to secular, from intimate and humble Dutch bourgeois interiors, from palaces to grandiose museum buildings—now it is being democratised by urban museum super-machines to InstaArt.  I try to find, together with some other museum founders the alternative path, which is being defined now often as “Slow Art”—art aficionados, specialists, collectors now want to take their time and devote much more [attention] to observing and thinking about the art.