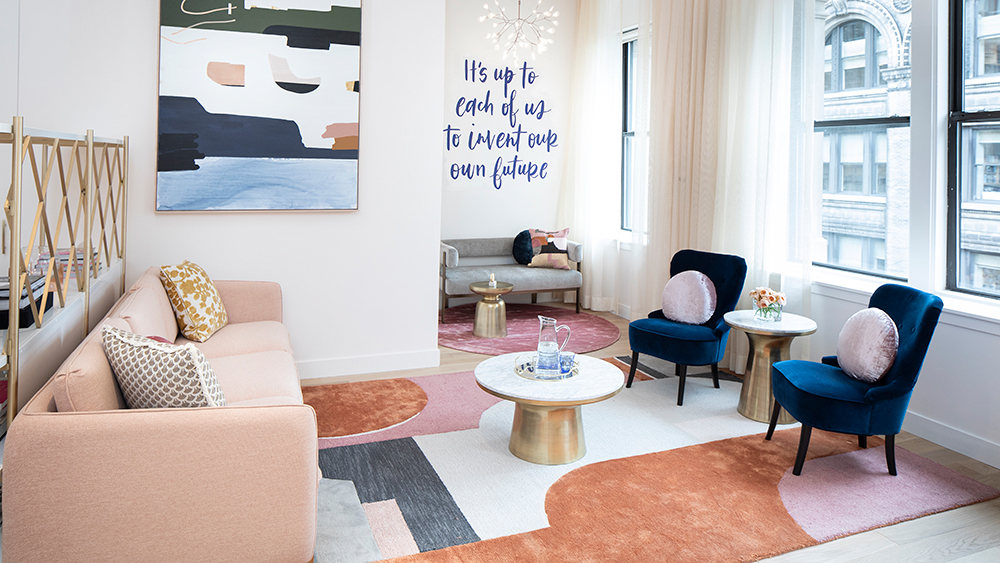 “I was 34 years old when I found out I was infertile. I have very vivid memories of that time. Not fond ones.”

Pam Schumann takes a breath. A breezy Ariana Grande chart topper lilts in the background; a fully stocked juice bar sits adjacent. It’s a lighthearted backdrop for subject matter that’s anything but. “For me, egg freezing wasn’t an option,” she continues. “There were moments when I thought, ‘I wish I had known that earlier.’ That’s why I’m so passionate about what we do here.”

That “here” is Trellis, a US-based fertility studio—a breed distinct from that of the fertility clinic—where Schumann serves as chief development officer. And it’s clear why the budding brand insists on the distinction. Aside from the millennial bops and botanicals, the space’s reception sports an “influencer wall” with a Michelle Obama quote emblazoned across: “It’s up to each of us to invent our own future.” A palette of whites, golds and soft pastels surrounds; any evidence of medical procedure is tucked away beneath a further screen of airy aesthetics.

Sound distinctly un-clinical? It should, but, let’s be clear—that’s not a bad thing. Trellis differentiates itself as an education platform, a place where women can not only “cycle” (Trellis-speak for undergoing the egg-retrieval procedure and subsequent freezing), but where they can learn more about their fertility and invent their future accordingly.

Bimonthly seminars (with complimentary green juice, of course), the occasional free “Fertility Friday” consult and a placard-laden “education hall” all serve this purpose, inviting women to learn more about what egg freezing entails and whether or not it’s right for them. Schumann notes that it’s not a “one size fits all” process. Nor is it a model where the procedure is thrust upon patients, as many decide that the procedure isn’t right for them after an assessment and consult. And that’s okay—in fact, it’s encouraged. “Arming people with the facts, above all, is very important,” says Schumann. “I mean, c’mon, we know more about our cholesterol levels than our fertile health.”

Trellis’s reception, with offices to the left. Photo: Courtesy of Trellis

And yet, Trellis isn’t alone in its mission to demystify oocyte cryopreservation. It may not even be the only studio (née clinic). Trellis launched its New York City location in November of 2018, just a few months after startup Kindbody opened its car doors. Yes, car—the company has gained notoriety for its pop-up model where women can climb in the back of a bright yellow “Fertility Bus” and get a quick assessment. Depending on the results, they can choose to cycle at Kindbody’s brick-and-mortar NYC clinic. The experience has even been marketed as a vacation by fledgling company Ovally—or “medical tourism” as the inaugural group of travelers dubbed it on Twitter—flying women out to Madrid for retrieval, where it’s vastly cheaper. Meanwhile, midtown-based Extend Fertility has been in the egg-freezing biz since 2016 and has 2,000 successful cycles to prove it.

Wall Street has certainly taken notice. Kindbody announced in April that it had secured $15 million (around £11.8 million) in Series A funding, bringing its total amount raised to $22 million (around £17.35 million). The funds will go toward providing a full suite of women’s services, from nutrition to gynecological services, the company said in a statement. “It’s a little bit of a disruptor,” one Extend Fertility investor, Jon Santemma, told NBC. “Egg freezing as an industry is here to stay. The market’s growing 25 percent a year.”

Still, fiscally ripe as the burgeoning sector may be, it’s not without its criticisms. Many have questioned the validity of the science at Trellis and the like—evidentially, a millennial-geared aesthetic and Instagram presence do little to inspire confidence amid a norm of stark, traditional clinics. Marketing efforts have also been scorned as invasive and, at their worst, offensive. As it happens, many women don’t want to be reminded of their languishing fertility as they scroll through Facebook. Extend Fertility in particular came under fire for its “Let’s Chill” campaign, in which freezing eggs was likened to purchasing a frozen acai bowl. Extend Fertility CEO Anne Hogarty was quick to clarify the ad’s purpose, informing NBC that any woman contacting Extend as a result of the ad would be provided with “transparent and truthful” information regarding the procedure, and that such ads are merely meant to “start the conversations.” In other words, no acai will be provided (although, who knows, a juice cleanse may very well be on the menu).

Trellis’s marketing manager, Casey Tarnas, had this to say of the brand’s outreach: “We have a big social presence, and influencers really help us tell our stories. Obviously, egg freezing is a really big topic, and a complex one. Using social media and influencers help us say more than just, ‘come freeze your eggs, like, here’s an ad.’”

And as far as the science itself is concerned, Trellis boasts a partnership with IntegraMed Fertility, the largest network of fertility clinics in America, with 30-plus years of experience and, allegedly, upward of 70,000 eggs frozen. So while the Turkish cotton robes and exam-room skylights may make you feel as if you’ve taken a wrong turn and wandered into an off-kilter variety of fertility-themed spa, there are qualified medical professionals on staff. And coaches. And nutritionists. “It’s a medical procedure, and we take that very seriously,” adds Schumann. “It’s not nothing, and we are very grounded in the science of it.”

Of course, since the flagship product is a a medical one, it does cost money, and it’s a little pricier than your average frozen treat. Trellis and other studios offer financing options, paid out on a monthly basis, but the bottom line is still a doozy: almost $10,000 (around £7,880) for the procedure alone, plus up to $5,000 (around £3,900)  more in medication and $600 (around £470) per year to keep retrieved eggs on ice. Most insurance plans don’t cover the procedure, either, although fertility studios like Trellis are doing their part to change that, conducting “lunch and learns” with employers about the benefits of paying the way. Some are ahead of this curve: Apple and Facebook have been covering egg-freezing costs since 2014.

Still, if Santemma and Schumann’s rhetoric holds any weight—and, given the way things are moving, they certainly appear to—the option to freeze one’s eggs should only become increasingly more glamorous and accessible in the years to come. Trellis notes its plans to expand on a national level, Kindbody will open a Flatiron flagship later this year. “We do see ourselves as part of a movement. It has to do with the technology, with the moment of time that we’re in,” says Schumann. “We’re in this for the long haul, we’re not just fly-by-night here. Women are going to use these eggs. We want them to have the best chance.”

Seahawks, Blazers to be Sold by Allen Trust Within ‘10 to 20’ Years