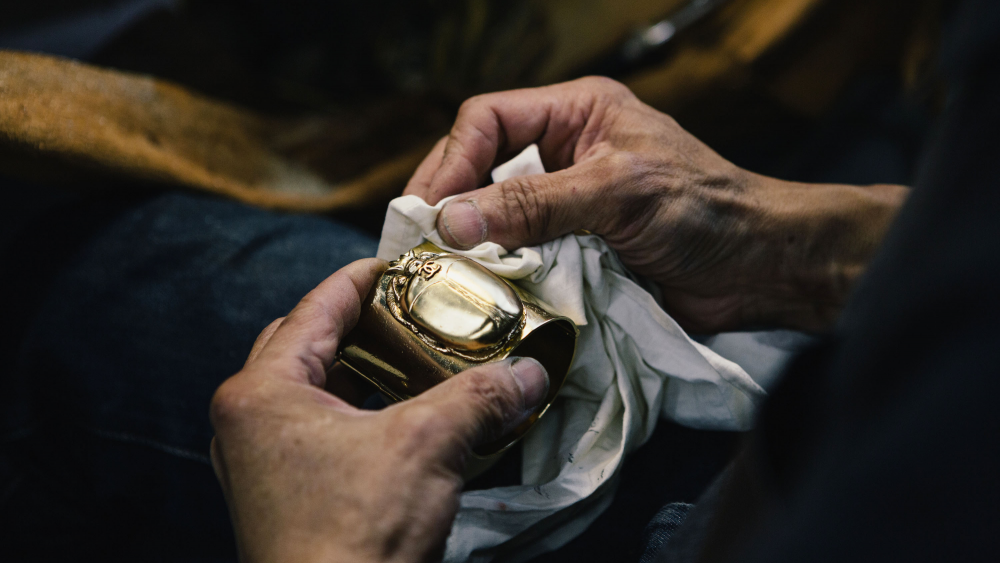 In the small French town of Pau near the Pyrenees, inside a sprawling workshop with floor-to-ceiling windows overlooking green meadows, a weaver threads spools of endless yarn in an enormous loom. The strands are strung chaotically and every which way, yet the intently focussed artisan keeps track of each slender filament as it’s pulled through the machine’s many stations. The process, called warping, has been done the same way for centuries. It’s a tedious undertaking that will require four, maybe five, days of labour; only then will she begin weaving the fabrics.

Today, she’s warping numerous strands for a tweed fabric—and not just any tweed: This one is woven with a thread of minuscule sequins that reflect the light, creating a slightly effervescent textile. This and Chanel’s other famous tweeds—which the brand uses for its signature jackets, handbags and elegant Peter Marino–designed furnishings—are made here.

An artisan weaves golden tweed fabrics for the pre-fall Métiers d’Art collection presented at the Metropolitan Museum of Art. Photography by Emmanuel Fradin

The workshop, called ACT3, was established 23 years ago by weaving expert Maria Messner, a native of Salzburg, Austria, who moved to Pau for its reputation as a textile hub. From the start, she had no intention of making traditional cloth; instead, she experimented with new materials and unconventional combinations of wool, tulle, leather and more. She peddled her creative cloths to the Parisian fashion houses, including Chanel, Dior and Christian Lacroix. Hers was a laborious job—one that required skill, passion and dedication—and though her business was thriving, she worried about how she and her 23 employees would sustain it. So, four years ago, she asked her biggest client, Chanel, to invest.

Today, ACT3 is one of 27 artisan workshops that Chanel has systematically acquired or partly funded to ensure that the sources for its specialty products thrive—and ultimately save age-old artisan crafts from potential extinction. When we think of the French global powerhouse, we tend to imagine grand-scale production, but the family-owned business, which brought in more than $11 billion (or around £8.35 billion) in sales last year, has a strategy that’s rooted in small-scale artisan manufacturing. It started investing in its core artisan suppliers in 1985, and in 1997 it established its Paraffection subsidiary (the name translates to “for the love of”) to perpetuate and preserve these crafts. In most cases, Chanel acquired these suppliers, yet the brand opted not to interfere with their production or management—even allowing them to create for other fashion houses. The aim was to financially support the small artisan workshops that otherwise might not have had the resources to survive.

Could such high-fashion altruism be the future of luxury goods? Indeed, if big brands want to build an audience among a new, often younger set of consumers—who see fashion’s potential to be more than a mere status symbol— they must support the heritage and artisanship behind their products. It’s not enough to look good anymore—our purchases need to do good, too.

Chanel’s president of fashion, Bruno Pavlovsky, who also oversees the Paraffection division, said recently, “I believe more and more that, in the future, this emotional value will be the success of the luxury market. If you lose the emotion, you will lose the value, and that’s something we believe very strongly in at Chanel. We need to keep that.”

Pavlovsky isn’t alone. The movement to support the many rungs of craftsmanship is happening beyond Chanel: Luxury-goods leaders LVMH and Kering are also investing in artisans and establishing schools to train new generations in age-old crafts. LVMH even opted to shine a spotlight on its artisans with Les Journées Particulières, a biennial event that opens to the public the private doors of dozens of its workshops across Europe.

Of course, there’s profit to be made with these magnanimous endeavors, but this kind of long-term commitment doesn’t come cheap. For instance, Chanel’s Métiers d’Art collection, which the late Karl Lagerfeld launched in 2002, has become one of the brand’s most celebrated—and costly—shows of craftsmanship, with elaborate fashion presentations taking place in a new destination each year. (Last December’s Egyptian-themed collection, unveiled in the Metropolitan Museum of Art’s Temple of Dendur, was a high point for the series.) Next year, in Parisian suburb Aubervilliers, Chanel will open a sprawling 275,000-square-foot campus, designed by the French architect Rudy Ricciotti, to bring together the different workshops on a single site, while preserving their individual identities as independent entities. Such measures have bolstered many artisans and, in some cases, saved entire crafts, as was the case with the 19th-century Parisian feather house Lemarié—perhaps the only remaining plumassier—which Chanel acquired in 1996.

Gold beetles for jewellery and accessories are made from wax molds. Photography by Emmanuel Fradin

Lagerfeld always recognised the need for ateliers to innovate—regardless of cost—and that recognition continues today. “With Chanel, there is no limit to what you can make,” says Messner. “Some fashion houses come to me and ask about price. Not Chanel. Creativity is the most important thing for them.” That’s why it takes on average two months to make a single Chanel tweed. (That’s also why the pieces come with such high price tags.)

Patrick Goossens also understands the drive to innovate. His late father, French jeweller Robert Goossens, collaborated with Coco Chanel for decades. “The worries of the business side of things are gone now,” says Goossens, who sold the family business to Chanel in 2005 and now serves as its artistic director. “Now I can focus on creation.”

Trained as a classical jeweller in Paris, Goossens joined his father’s atelier at 19. Over the years he worked to execute Lagerfeld’s—and now Chanel creative director Virginie Viard’s—vision through exquisite jewellery and objects. For last year’s Egyptian-themed collection, Lagerfeld and Viard wanted gold beetles for jewellery and accessories, so Goossens replicated the beetles his father had made for Chanel 50 years ago, using the original models from his extensive archives. The artisans in Lesage’s workshop make bronze-and gold-plated pieces the same way fine jewellery is made by hand: from a wax mold. It’s a process that could easily be automated—but that’s not luxury.

In Montmartre, the embroidery house Maison Lesage has a treasure trove of 75,000 samples dating back more than a century, but when Chanel acquired the atelier in 2002, Lagerfeld was interested only in looking to the future. “Most designers look in the archives for ideas, [but] not Karl; he wanted something totally new every time,” says Hubert Barrère, Lesage’s artistic director. When Barrère entered the embroidery trade in 1989, his goal was to impart a new sense of creativity—a mission shared by Lagerfeld. “I mix baroque and modernity,” Barrère says. His is a skillful job that has required almost a decade of training to master. An embroidered couture dress, for instance, may require up to 1,000 hours of handiwork to complete. Chanel accounts for roughly 70 percent of Barrère’s business, and he says the collaboration is especially fruitful due to the fashion house’s desire to infuse craft with a modern spirit. “I usually have a conversation with Virginie about the theme,” he says, “and I brainstorm with my team and we present concepts to execute the vision.”

The Paraffection subsidiary is rife with similar stories. The House of Desrues—the first métier d’art acquired by Chanel, in 1985—produces buttons, jewellery, belt buckles and handbag clasps for the label. Chanel’s coveted handbags are made at the Ateliers de Verneuil-en-Halatte, where a heritage is preserved that is both cultural and technical. Apprentices work for four to five years before they can seamlessly carry out the 180 techniques required to bring a single bag to life. And in the Scottish town of Hawick, 200 craftspeople at Barrie—founded by Walter Barrie and Robert Kersel in 1903—manufacture the brand’s cashmere.

These ateliers are ushering Chanel into its next era: a period where human creativity and handwork and emotion are more valuable than a £7,500 handbag or £15,000 gown.