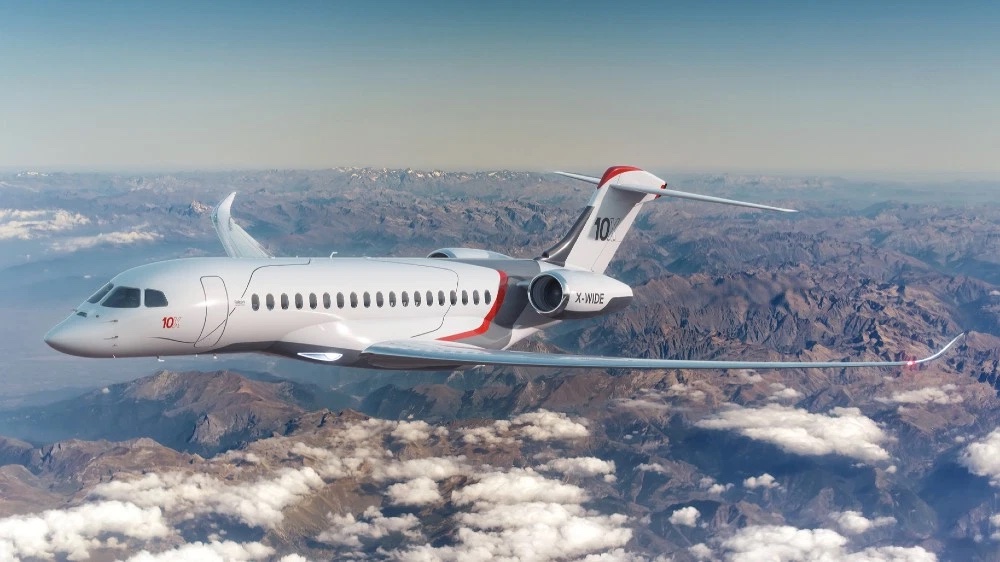 The Falcon 10X has become the ultra-long-range business jet to beat in terms of luxury and internal volume. French jet manufacturer Dassault debuted its new flagship today in Paris. CEO Eric Trappier called it a “new benchmark in business aviation,” during its Dassault YouTube channel launch. “The Falcon 10X will offer an unrivaled passenger experience over both short- and long-duration flights, along with breakthrough safety features,” said Trappier. “We have optimised every aspect of the aircraft with the passenger in mind and established a new level of capability for ultra-long-range aircraft.”

The Falcon 10X has the largest interior among ultra-long-range jets, with 3,300 square feet of space that includes a 9’1” cabin width and 6’8” headroom. Depending on owner preference, that translates to as many as four lounges, including a bedroom with sitting area and private bathroom with full shower. To enhance the sense of openness, four large windows pour natural light into this private living area. 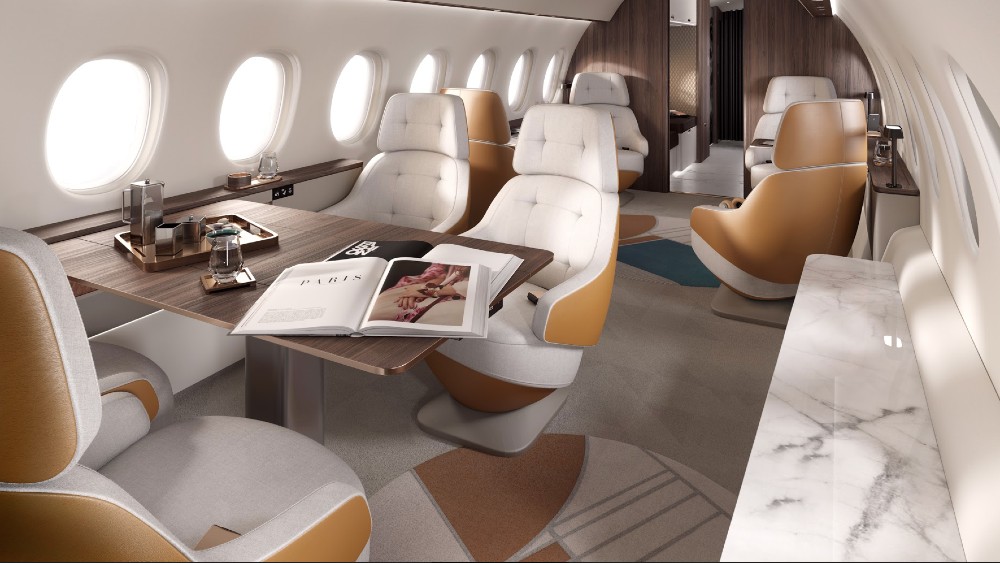 The 3,300-square-foot interior can be divided into four lounge areas, along with a private bedroom. Courtesy Dassault

Thirty-eight windows across the 10X’s cabin ensure that every nook and cranny receive inbound light to help passengers transition multiple time zones. Owners will be able to customise the interior seating and layouts, working with either outside designers or Dassault’s team.

The French aerospace company also placed passenger comfort as one of the 10X’s top priorities. Cabin air is fully refreshed up to 10 times faster than most modern-office buildings with the same type of filtration system found in most hospital ICUs. While the aircraft’s flight ceiling is 51,000 feet, onboard pressurisation feels more like strolling around a mountain resort. Those comfort factors were considered non-negotiable since flights on the 10X could last more than 15 hours.

The Falcon 10X’s interior isn’t as spacious as converted commercial jets from Airbus and Boeing, but it’s going mano a mano against the current big boys of the business jet world—Bombardier’s Global 7500 and Gulfstream’s G700. All three aircraft share the same maximum speed of Mach 0.925, which they can achieve 30 minutes into flight after reaching cruising altitude. They also have the same high-speed cruise of Mach 0.90, and a long-range cruise of Mach 0.85. 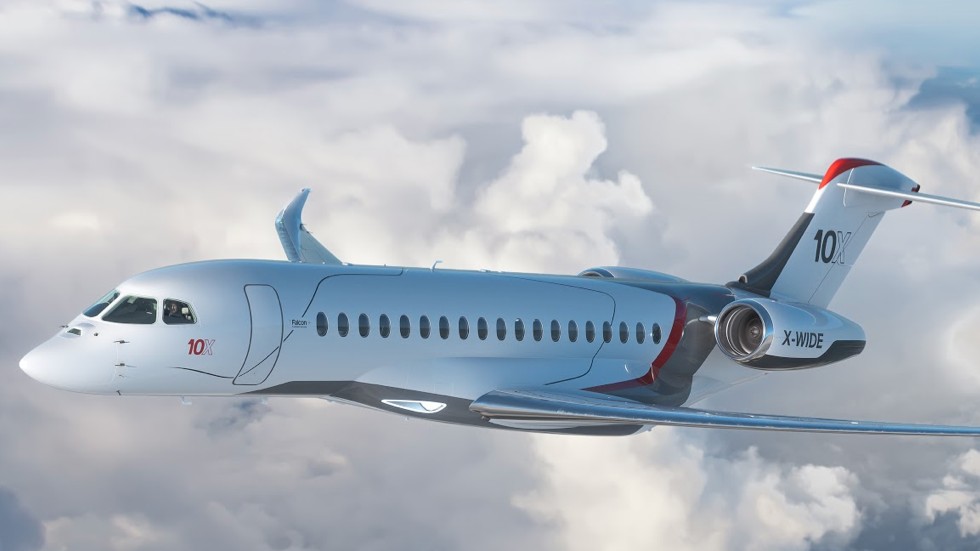 With its twin Rolls-Royce Pearl engines, the Falcon 10X can fly nonstop for 15 hours with a maximum range of 8,631 miles. Courtesy Dassault

The 10X will be able to fly nonstop from New York to Hong Kong, or Los Angeles to Sydney. Its maximum range of 8,631 miles came in 230 miles shy of the Global 7500’s 8,861 miles, but it matches the reach of the Gulfstream G700 down to the mile. Dassault credits a portion of the aircraft’s performance to its lightweight carbon-fibre wings and increased wing sweep.

The 10X was designed with two engines, as opposed to Dassault’s trijet tradition, which ended after its most recent 6X was powered by two Pratt & Whitney Canada PurePower engines. For the Falcon 10X, Dassault chose Rolls-Royce Pearl 10X powerplants. The twin-engine design speaks to passengers’ demand for more sustainable solutions in propulsion as well as materials like its carbon-fibre wings. “We changed the material with which we built the wings from metal to carbon fibre, something we already did on the Rafale fighter jet,” says Dassault’s  Carlos Brana. That allows both high- and low-speed flying.

Dassault also invested in fly-by-wire technology, which in addition to making flights as smooth as possible, now includes “power control” for maximum efficiency, especially flying in inclement weather. With a single push of a button, the aircraft will self-stabilise if situational awareness deteriorates. Dassault also added a smart touch for the pilots: The cockpit seats fully recline into flat beds for either pilot to rest during low workload phases, while the other flies the plane. 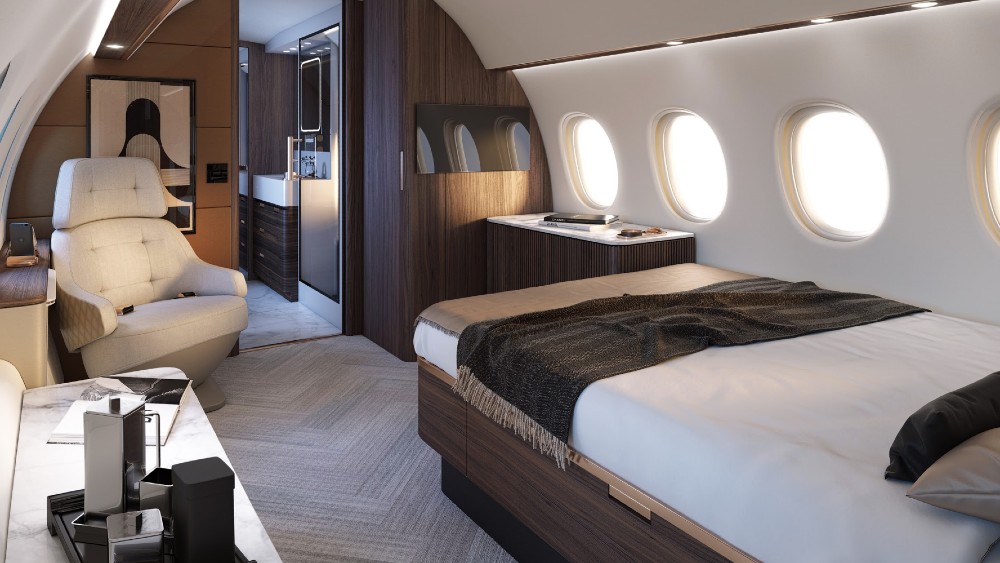 The private bedroom also includes a separate ensuite, with an almost-unheard of luxury on a business jet–a full standup shower. Courtesy Dassault

Requiring less than 2,500 feet of runway, the 10X will be able to operate in smaller airports where large aircraft typically cannot operate. With the added benefit of its composite wings, the 10X’s low-speed steep approach capability is complemented by the FalconEye—the industry’s first combined vision system—to achieve safe, low-speed performance.

Trappier said the Falcon 10X will enter service at the end of 2025.