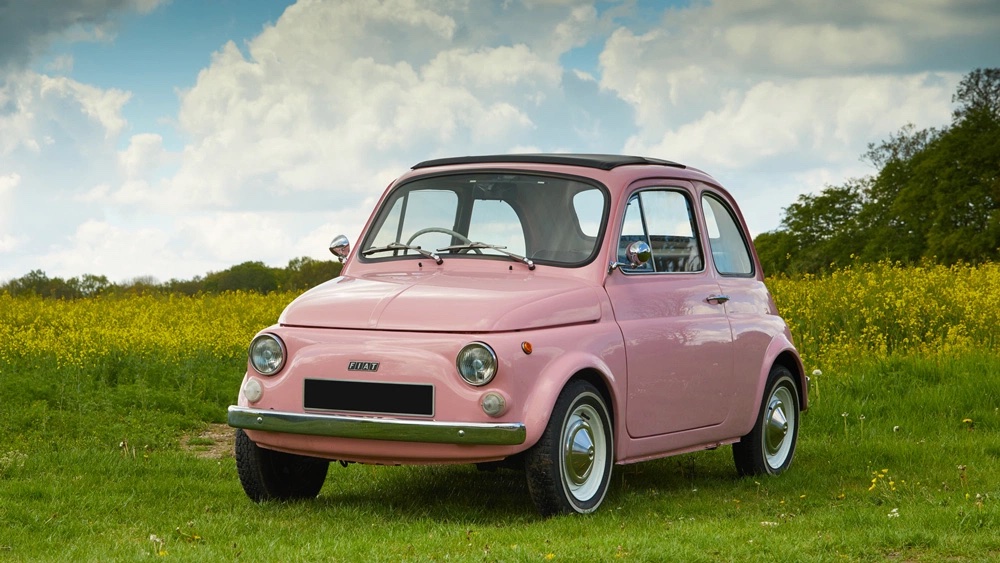 Gooding & Company’s Geared Online auction this month will originate from the UK, with bids opening June 11 and closing June 18. Among the number of quite significant lots on offer are a 1969 Ford GT40 (the last numbered and built), a 1990 Porsche 962C and a striking 1968 Lamborghini P400 S Miura. But at the other end of the spectrum is a car no less significant than such coveted sports cars and racers. In fact, some would rightly argue that the humble Fiat 500 is, next to the Volkswagen Beetle, the most important postwar European automobile ever made. Its ubiquity is matched by its functional and aesthetic perfection, and so well executed is the overall package that it can only be regarded as a masterpiece of ergonomic brilliance and timeless deign. 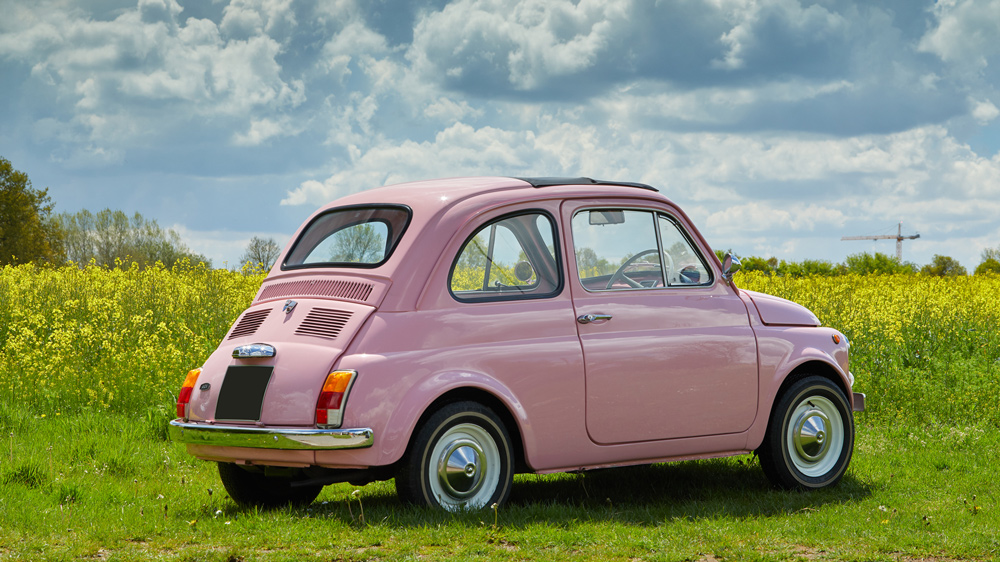 Fiat’s Nuovo 500 followed the 500 Topolino (little mouse), the toy-like model that essentially saved the company and brought mobility to millions of Italians and other Europeans after World War II. The tiny rodent’s successor, generally referred to as the Cinquecento (five hundred), was introduced in 1957 and continued until 1975. Its designer was Dante Giacosa, an accomplished engineer who received the Compasso d’Oro award for his creation, the first time the prestigious industrial design prize was ever awarded to the automotive industry. 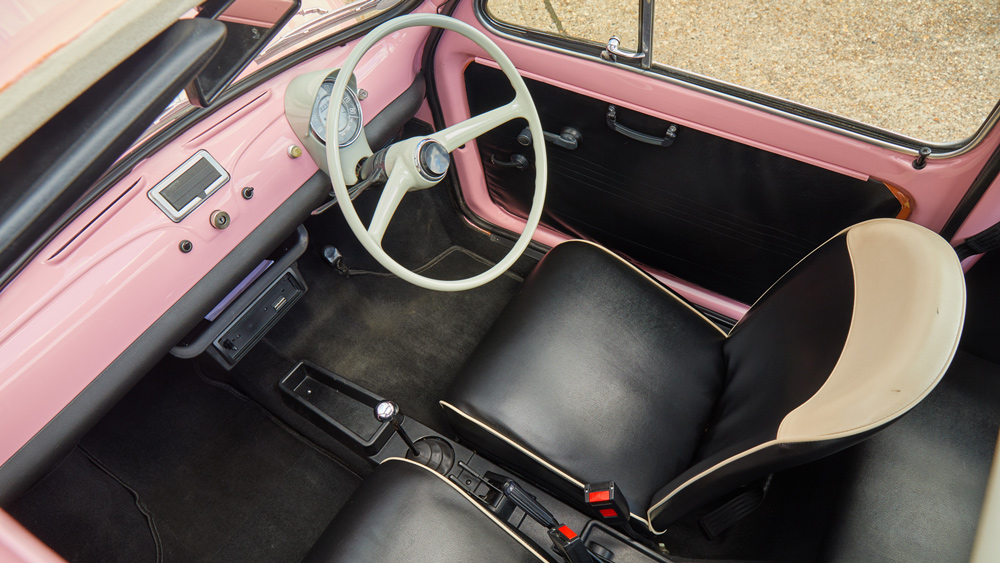 Functionally, the Cinquecento can best be described as “basic.” Its two-cylinder, air-cooled engine is rear mounted and connected to a non-synchronized four-speed gearbox. The bottom of the Fiat range at the time, the Cinquecento is scarcely more than nine feet long and has a wheelbase of about six feet, making it the only vehicle of its day capable of being parked in spaces made for motorcycles. Weighing about 1,100 pounds, the car made do with about 13 hp and 20 ft lbs of torque. And yet, with nearly 4 million sold, there were likely as many love affairs between owners and their diminutive Fiats.

“This unique Fiat 500 is such a pleasure to drive,” says Joe Twyman, UK Specialist at Gooding and Company. “It’s a real head turner and widely appreciated among collectors. With such a lovely backstory, the car will be a joy to its next owner.” 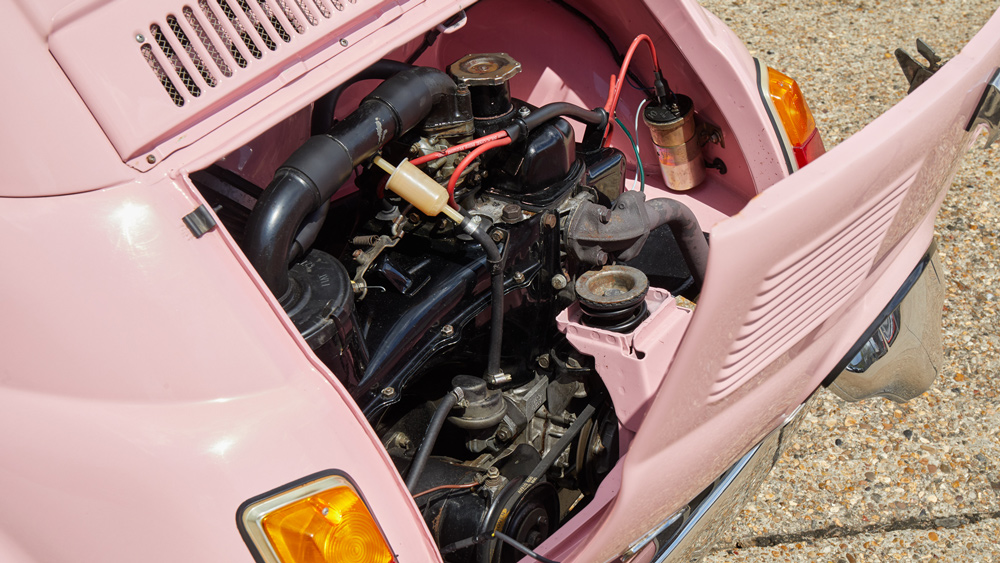 And that backstory is charming. This particular example was located by the consignor in an Italian garage where his Bentley was being repaired after experiencing an electrical failure. Inquiring whether the Fiat might be available for purchase, he was told the car had been in the family for ages and was not for sale, but following several aperitifs, a deal was struck, and the Fiat was shipped to the consignor in London. 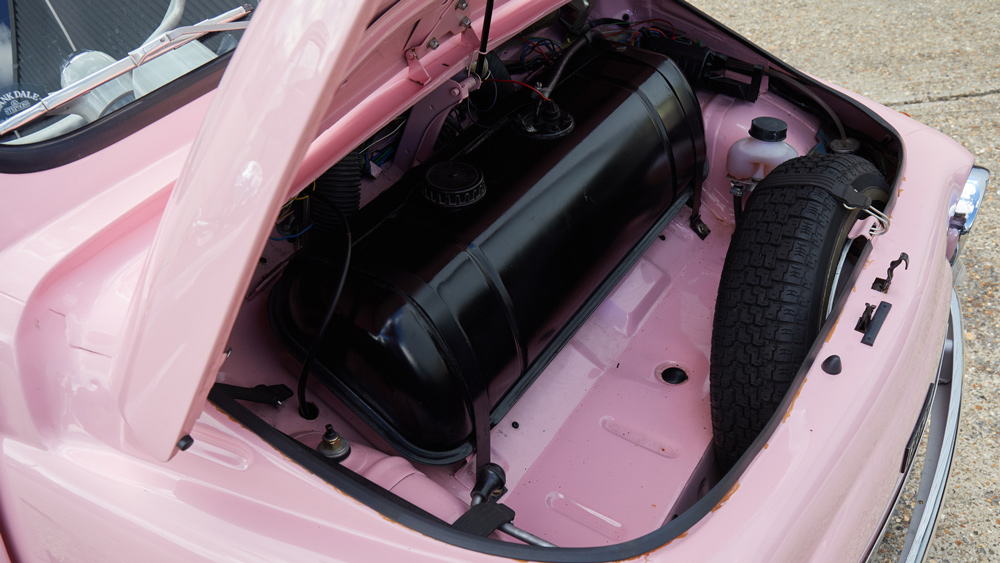 It’s no surprise that there’s very little room under the hood, save for a spare tire. Photo by Matthew Howell, courtesy of Gooding & Company.

It’s not unusual for these Cinquecentos to undergo thorough recommissions at the hands of sentimental owners, or their restorers, but the incredible attention bestowed on this example exceeds all reason, as demonstrations of love often do. The objective was to produce a perfect example, regardless of cost, and that it would serve as a gift for the consignor’s wife. Multiple Fiat specialists contributed to the project, but the majority of the work, including the conversion to right-hand drive, was completed by Frank Dale & Stepsons, one of the UK’s foremost Bentley specialists. Invoices exceeding £50,000 attest to the serious restoration undertaken. 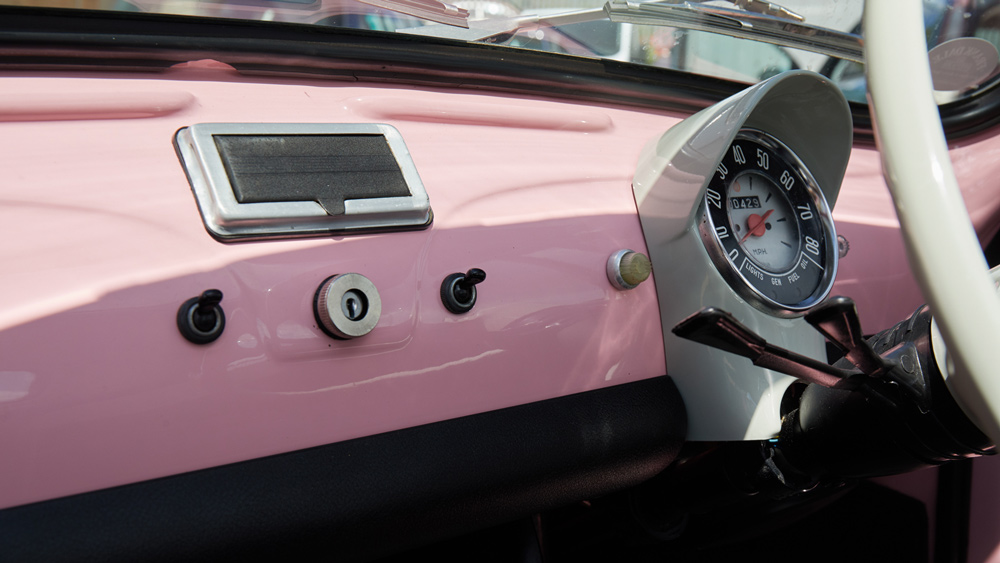 The road ahead is the only infotainment system present. Photo by Matthew Howell, courtesy of Gooding & Company.

Remarkably, this Fiat is finished in the same shade of coral pink as the prized AGA cooking range used by the owner’s wife, and upon its completion, the car was carried into their kitchen by four large men in a theatrical presentation. (For those without culinary inclinations, AGA represents the ne plus ultra of such food-prep accoutrements.) As with so many great car stories, one cannot make this stuff up.

In the ensuing years, the 500 has been used in Tuscany, Rome and London, receiving attentive service.  This Fiat wears pink well, and for those attuned to such an exquisite outlier, the old saying in the collector-car world holds true: “Buy the car and get the restoration for free.”

The Bizarre Journeys Superyachts Often Take to Reach Their Owners

This Life-Size Lamborghini Sián Replica Is Made of 400,000 Lego Pieces