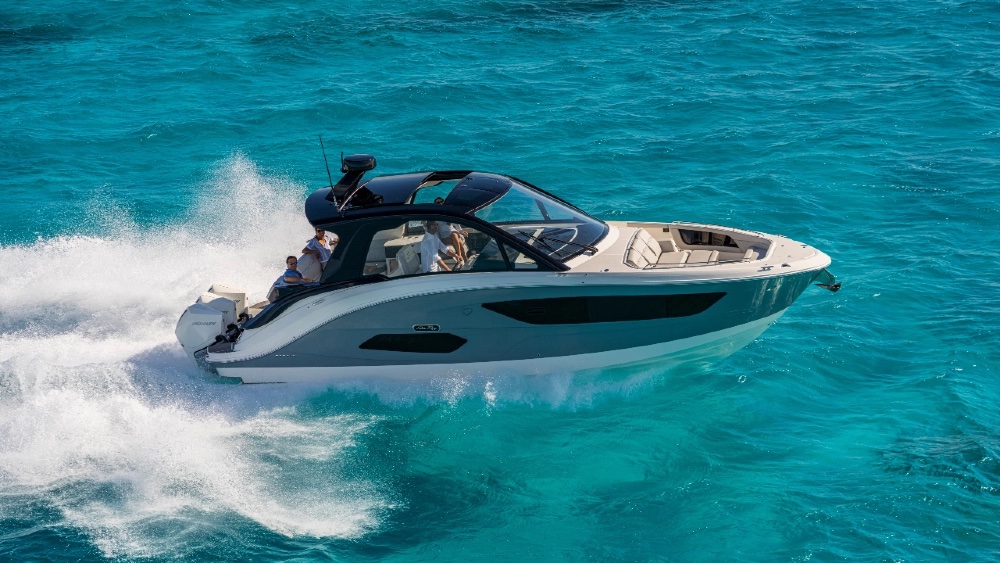 Launched in 1975, the Sea Ray Sundancer is one of those iconic American designs that is mentioned along with, say, the Chevy Corvette or Ford Mustang. The Sundancer has gone through many iterations during its 46 years on the water, and the just-released 370 Outboard is a glimpse into its future.

“This new model defines the future of Sea Ray and its new design language,” Charlie Foss, design director of the Brunswick Boat Group, told Robb Report at a launch event in Sarasota, Fla. “We really started looking back at what made Sea Ray successful—the Sundancer made Sea Ray famous—and took the unique features of the classic Sundancer and made them modern.”

When it was launched in 1975, the Sundancer was considered a fairly utilitarian day boat, with a long forefoot, big cockpit and inboard engines. As Sea Ray became the America’s largest boat builder in the 1980s, the Sundancer family began to take on curves, sport bigger inboards and boast elaborate cabins. That trend continued into the 1990s and 2000s, but by 2015, the model that once defined the inboard cruiser category had lost some luster. Big outboards had become the most popular form of propulsion and the inboard cruiser category was dwindling. Parent company Brunswick Corp., who had backed a 65-foot motoryacht that didn’t compete too well with European imports, even put the Sea Ray brand up for sale in 2017. 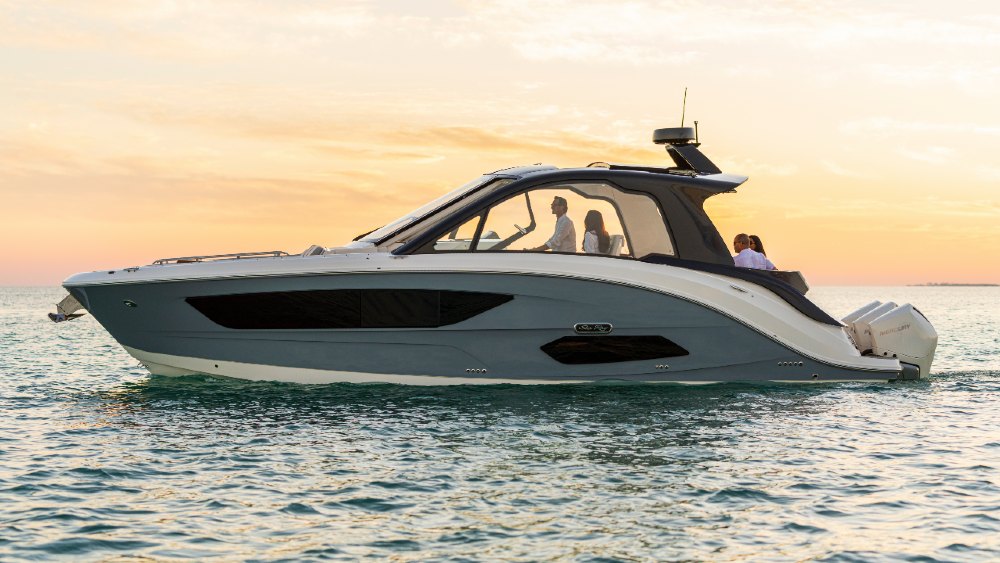 Brunswick eventually recognised  the potential for the rebirth of the brand, and in the last three years, Sea Ray has released a string of new, more market-focused designs that look more to the future than the past. It has left the motoryacht segment to the Italians, where they excel, and instead focused on smaller cruisers, where Sea Ray made its name.

At the dock, the 37 has a profile that is both modern and somewhat retro, with a new curved hardtop mated to gunwales that swoop down towards the water at the stern. “We needed to make sure the boat stays looking long without getting too tall,” says Foss, “but the proportions also had to look long in the bow, which was a Sea Ray signature. The haunches in the back give it a muscular feeling as if it’s running when it’s just sitting there.”

Modern day boats typically have cabins for weekending, but they also focus on large groups and ease of movement. “We asked ourselves how to create social areas in the bow and cockpit so we can get a bunch of people together, while also creating easy pathways for people to move around,” says Foss. 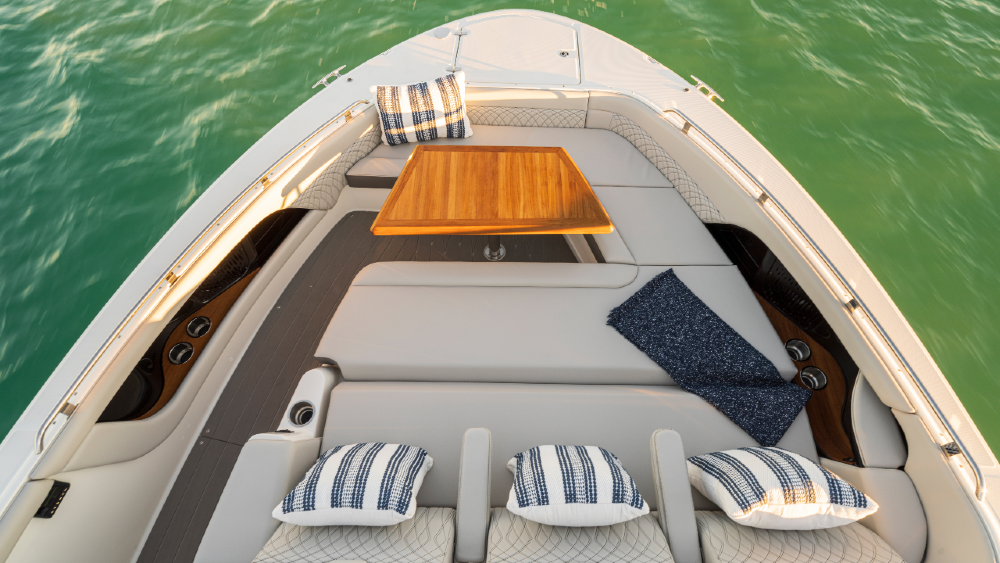 The bow is a full social area with three seats and a forward lounge that doubles as a dining area. Courtesy Sea Ray Boats

The answer was a cockpit with lounges (the aft one has a moving bolster that shifts the seat from forward facing to backward facing), lounges along both side of the centre, each with wooden tables, and a large outdoor galley. The bow’s even more innovative layout includes a three-person seat and U-shaped lounge that transitions into a dining area with the wood table.

Detailing across the boat is exceptional. “We’re using natural materials in woods and metals, including a sustainable teak alternative for the tables and the footrest under the helm station,” says Foss. The designers have also used the elongated diamond patterns in the stitching of the upholstery as a general motif across the 370, including them in the speaker housings and even in the Seadek flooring.

The cabin’s chic-but-subdued wood cabinetry and metalwork contrasts well with the white seating. There is also larger galley, full head and shower. The forward table converts to a berth and an aft berth with television that doubles as an entertainment center on rainy days. 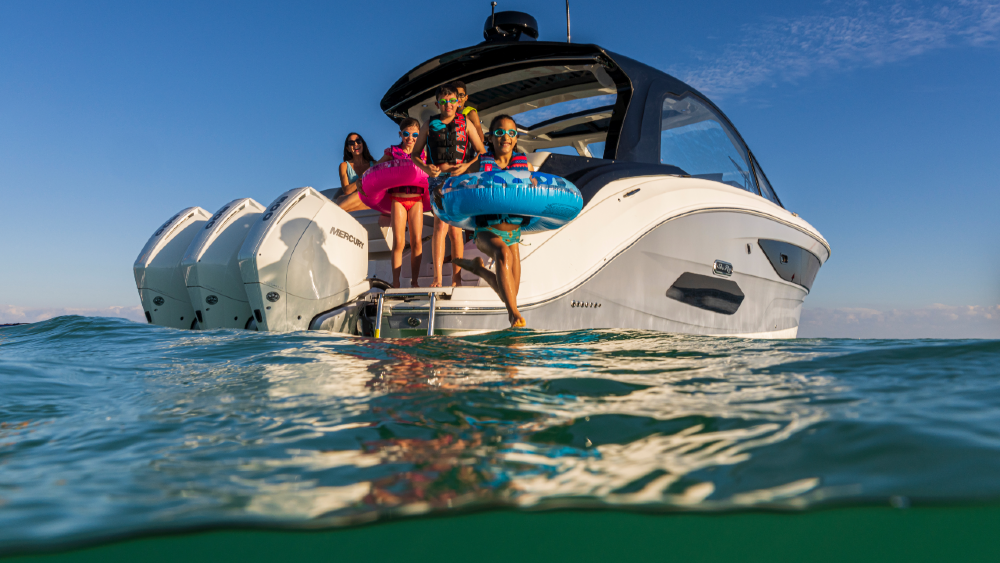 The boat is designed for a large crowd, but the layout has been left wide open for easy movement around the boat. Courtesy Sea Ray Boats

The helm was exceptional, with its twin 16-inch consoles and flush-mounted controls. The boat was a joy to drive, reaching a top end in the upper 40-mph-range. Sarasota Bay was calm on the test day, so there wasn’t a chance to see how the 37 handled big water. But the triple 300 hp Mercury Verados certainly gave it plenty of punch. I also used the joystick controls, a feature that is becoming more common on smaller cruisers.

Foss says that when the boating world of the future looks back 20 years, this 370 will be a turning point for the brand. “They’ll say that’s what led to the future of Sea Ray,” he says.

Perhaps, but for now, it’s just a very cool-looking ride on the water. 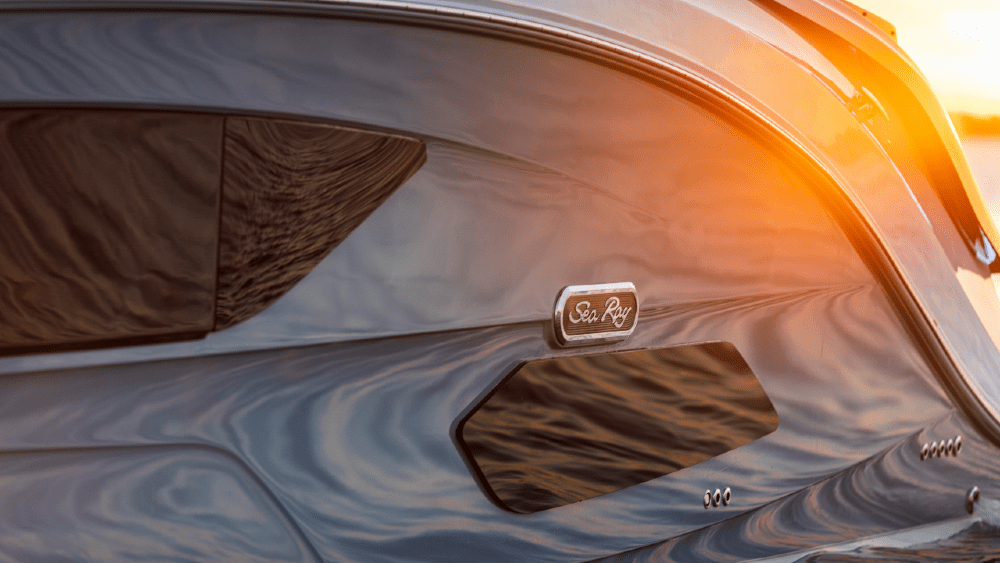 The Sundancer line has always had the name badge in the centre of the boat, and that hasn’t changed on the 370 Outboard. Courtesy Sea Ray Boats 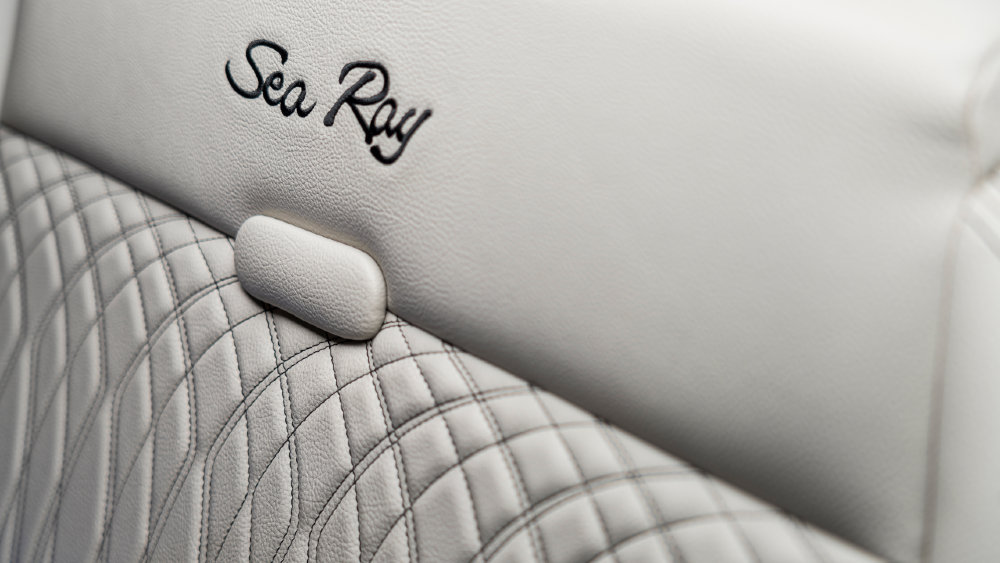 The diamond pattern motif in the stitching has been used all across the boat, from the stereo speakers to the flooring. Courtesy Sea Ray Boats 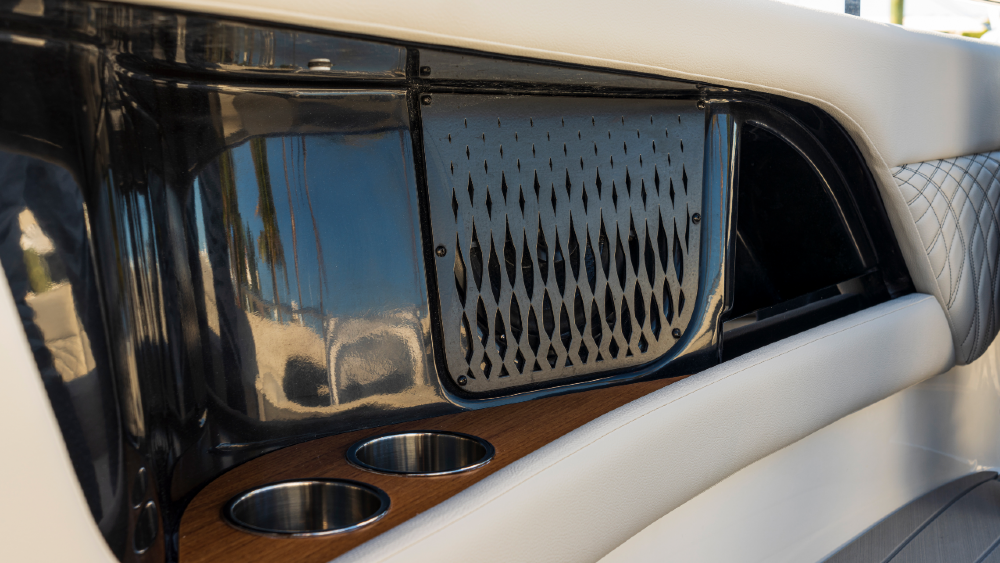 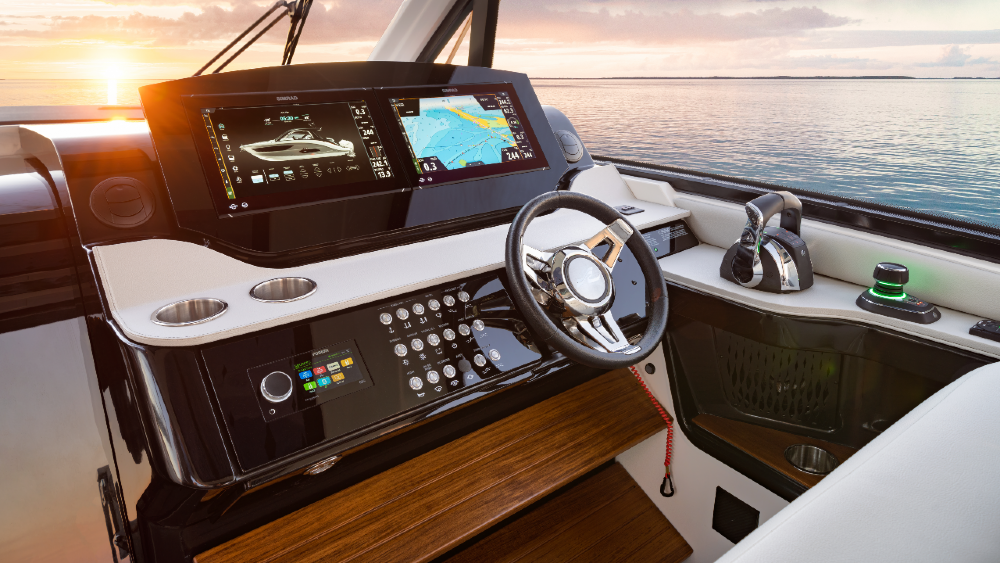 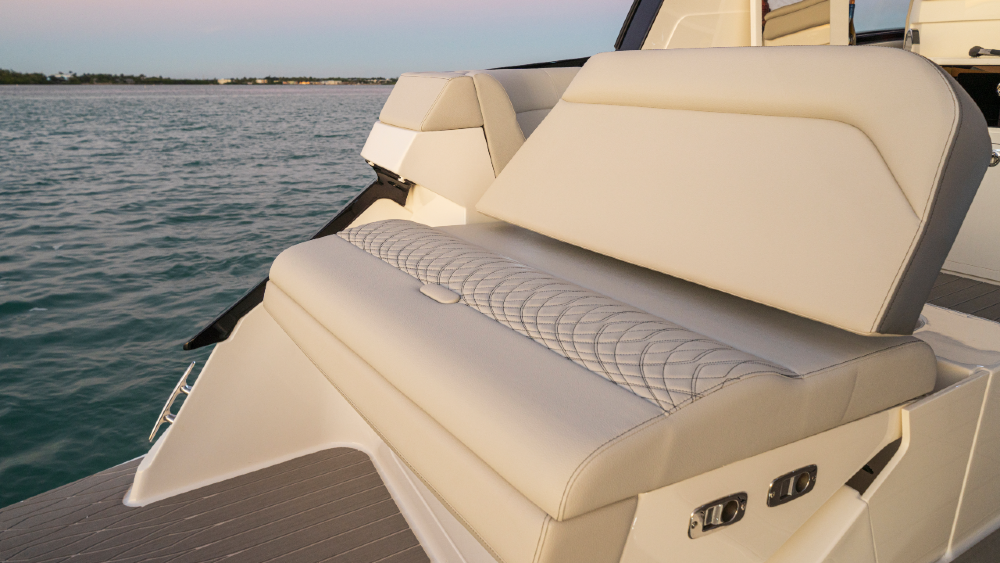 The backrest of the aft seat flips, so it can either face forwards or backwards. Courtesy Sea Ray Boats 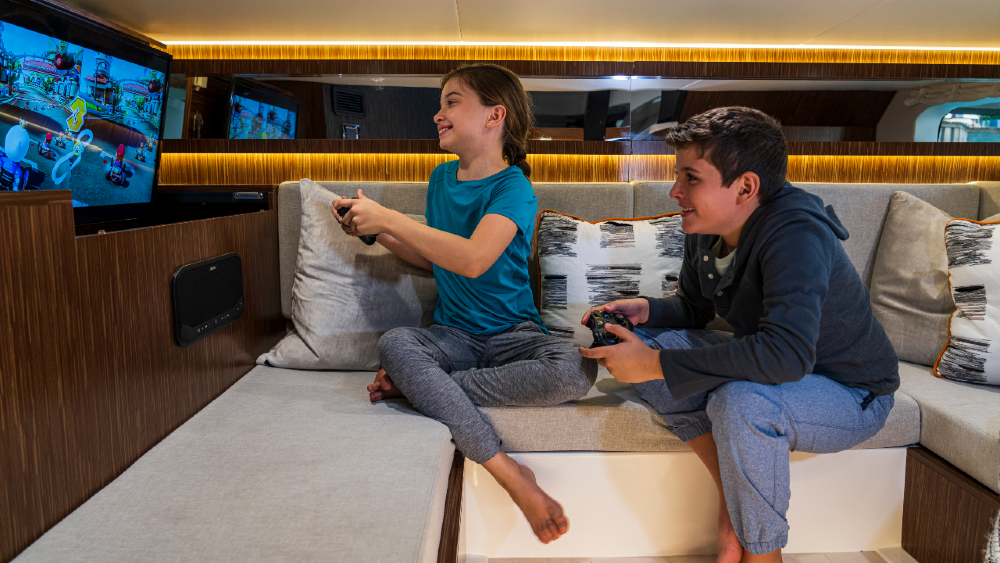 The aft stateroom either makes up into a large bed or doubles as an entertainment centre in rough weather. Courtesy Sea Ray Boats 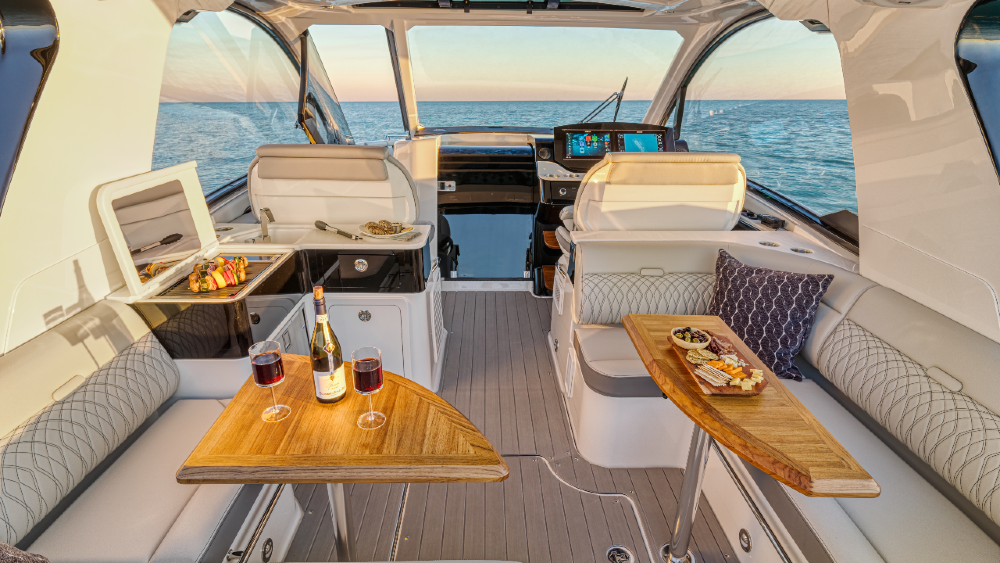