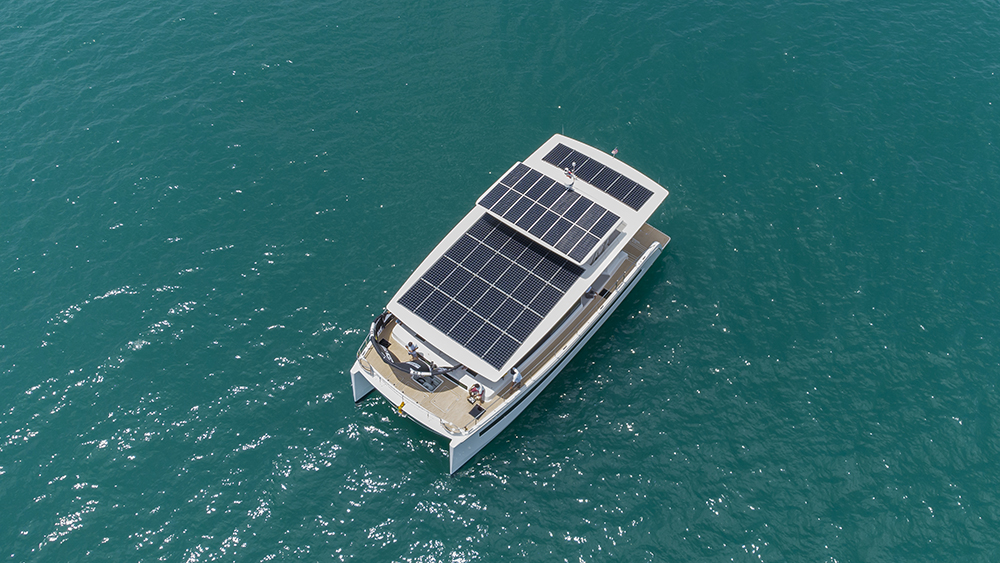 It looks like kites are taking off in the marine industry. Silent Yachts, whose solar-powered fleet continues to grow apace, has just unveiled a new catamaran that uses a giant kite to generate even more power and speed.

The solar-electric vessel is one of eight Silent 60 hulls currently under construction at the yard’s Thailand production facility, but it’s the first one to feature the new technology. Silent says the kite wing allows the 30-ton cat to travel up to 5 knots faster, giving it a maximum speed of 20 knots.

Designed by Wingit, the light and compact kite fuses seamlessly with the vessel. Unlike a traditional sail, it doesn’t require a big mast and therefore is far easier to operate. According to Silent, it’s more powerful, too, with the ability to generate up to 10 times more grunt per square foot than conventional sails.

The kite, which spans just shy of 140 square feet, attaches to a small 2-foot mast via four Kevlar ropes. For launch, it first gets inflated by an electric pump before it’s thrown overboard to drift away with the wind. While in the air, the automatic steering can take over and the kite can climb more than 393 feet above the vessel to increase propulsion. To retrieve the kite, the owner or crew uses the electric winch to pull it above the front deck. When not in use, the kite wing and its components can be stored in the bow, out of sight.

Aside from added speed, the kite reduces the amount of energy required from the e-motors and thus extends the vessel’s range: It can cruise for up to 100 miles a day for weeks on end. The kite also serves as backup propulsion should a floating fishing line get tangled in the propellers, for instance. 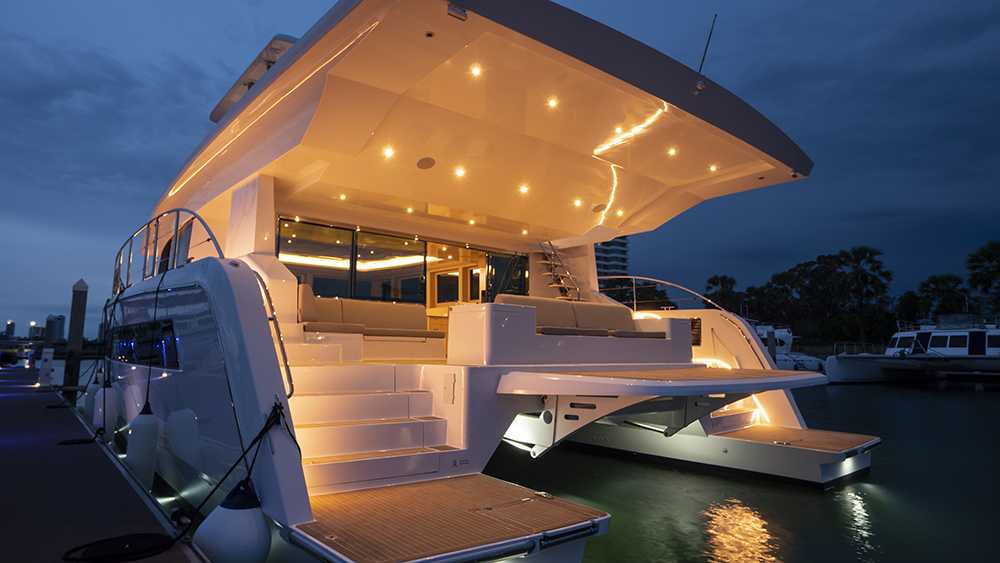 “The kite system sounds like the perfect match for windy days together with the electric propulsion system of Silent Yachts,” the German owner said in a statement. “I am an enthusiast of new technologies which help, little by little, to overcome the ecological challenges we are facing today.”

In addition to the kite-sail system, the 60-footer sports a high-performance hull with a long waterline, reverse bow and low draft for added efficiency. It also packs an array of green tech for silent and sustainable cruising sans any emissions. The 42 rooftop solar panels send kilowatts to banks of lithium batteries that in turn power the e-motors and the onboard amenities.

Onboard, the spacious interior features an airy main saloon and four guest cabins on the lower deck. Elsewhere, the bow and flybridge offer space for alfresco lounging while the bridge deck can hold water toys, stand-up paddle boards, kayaks and even e-bikes. The catamaran also features a liftable hydraulic platform located between two swim platforms aft that can store a pair of electric Jet Skis or a large tender.

“The Silent 60 is the first example of a new generation of solar electric catamarans that we produce and many more will follow,” the company’s CEO Michael Köhler added.

Indeed, the yard has received 17 orders for the Silent 60 to date and is offering the new kite-sail system for all its models.

It’s not the only kite-powered yacht concept that’s been floated in the industry, either. Last year, Red Yacht Design and Dykstra Naval Architects unveiled a 211-foot superyacht fitted with a giant kite to help propel it through the ocean.