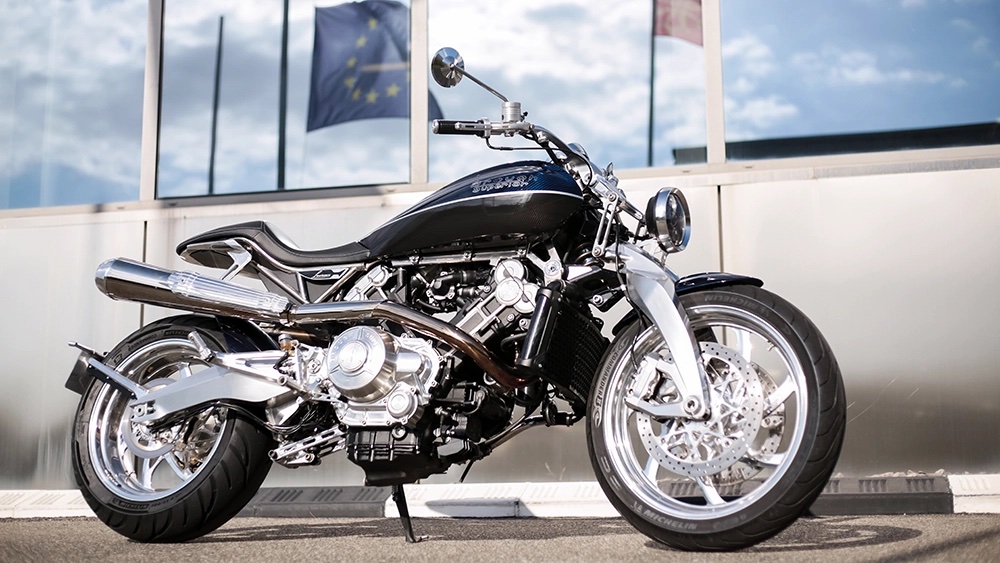 We can see the appeal of swapping camels for motorcycles, which is exactly what the real Lawrence of Arabia did after the first World War. T. E. Lawrence—the fabled Welsh-born military officer, archaeologist and author—served in the deserts of the Middle East during the war, becoming known for his role in uniting bedouin tribes against the Ottoman Empire and making a gruelling 70-hour dromedary trek. Afterward, his fondness for motorbikes was also renowned, especially those from Britain’s Brough Superior, founded by racer George Brough in 1919 but shuttered in 1940.

Who could blame him? Lawrence owned seven and, in his autobiographical work The Mint, waxes poetic about riding one: “He ambles at forty-five and when roaring his utmost, surpasses the hundred. A skittish motor-bike with a touch of blood in it is better than all the riding animals on earth, because of its logical extension of our faculties, and the hint, the provocation, to excess conferred by its honeyed untiring smoothness.” Tragically, it was while on the SS100 model that Lawrence swerved to miss children and crashed, dying from his injuries a few days later.

Brough Superior, revived in the new millennium by motorcycle connoisseur Mark Upham and industry veterans Thierry Henriette and Albert Castaigne and now based in France, recently debuted a model that salutes the brand’s ardent admirer. The 103 hp Lawrence reflects its namesake most notably in design. According to Castaigne, the executive director, “the model’s muscular and fluid line is inspired by the bedouin dagger that T. E. Lawrence wore on his belt… also evoked by the two protruding knife-like ridges that energise the shape of the tank.”

The hand-built bike features a titanium frame, carbon-fibre bodywork and a 997 cc V-twin four-stroke engine developed with French specialist Akira. In another nod to Lawrence, who was born in 1888, only 188 examples are planned, with European pricing set at roughly £56.500.

Responsible for the initial brushstrokes and sculpting a clay model, lead designer Rémy Lavernhe based the new bike’s cutting-edge styling on T. E. Lawrence’s personal jambiya, a traditional Arabic knife he wore in the field, and built on the architectural language of George Brough’s original SS100 motorcycle.

Engineers refine the raw design in CAD. “All 2,200 parts—everything developed by us—are made as 3-D models and able to be machined or sourced from suppliers,” says executive director Albert Castaigne.

3. Heart of the Operation

The connecting rod bolts, or studs, are tightened after the crankshaft is fit in the crankcase. “Assembling the aluminium engine is the starting point of production, as it’s really the bike’s structure,” says Castaigne. The process also includes installation of the oil pump and six-speed transmission.

CNC-machined titanium parts are welded to form the 17.6-pound main frame, which Castaigne describes as “the backbone of our motorcycle,” before it’s bolted to the engine.

A craftsman fabricates the wiring loom by hand for the taillight and license plate. Clinging to its roots, the model limits electronic aids—other than lighting—to the anti-lock braking system and injection mapping. “We don’t have driving modes and assistance,” Castaigne says. “We wanted to keep it simple.”

6. Bring in the Tanks

The Lawrence’s 4.5-gallon fuel tank takes a day to be painted by hand, with customisation options that include tinted lacquer and gold leaf.

Made by a Formula 1 outfit in Italy, the seven-spoke aluminium rear wheel measures almost 7.9 inches in width, compared to the original SS100’s 6.3 inches. The wider girth and Michelin Commander tires provide a stability that might have saved T. E. Lawrence’s life.

Adding to the motorcycle’s sweeping style, and attached after being polished by hand, the two mid-height-routed exhaust pipes are another nod to the past, sharing definition with Lawrence’s SS100.

The bike receives a double seat, a first for a Brough in the modern era. Castaigne says it will offer plenty of support, especially while accelerating, because of its hollow shape. The passenger-friendly setup may have existed in pre-war bikes, but Lawrence himself was more of a lone wolf.