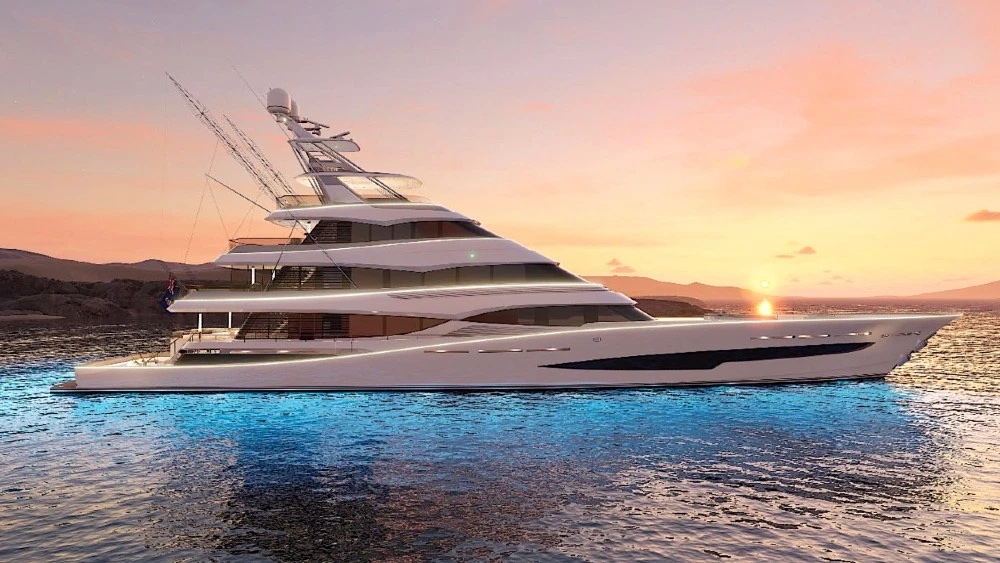 Designed by Dutch naval architects Vripack, and soon to start construction at the Royal Huisman yard in the Netherlands, Project 406 as it’s currently codenamed, will be a 30-knot “battlewagon,” designed to chase marlin, swordfish and sailfish to the ends of the earth. “Project 406 is a sportfishing machine on steroids,” Vripack co-creative director Bart M. Bouwhuis told Robb Report. “It has the proportions of a typical American sport fishing yacht, with a long, flaring bow and open foredeck, and raked-back superstructure. It’s just bigger in every way.” 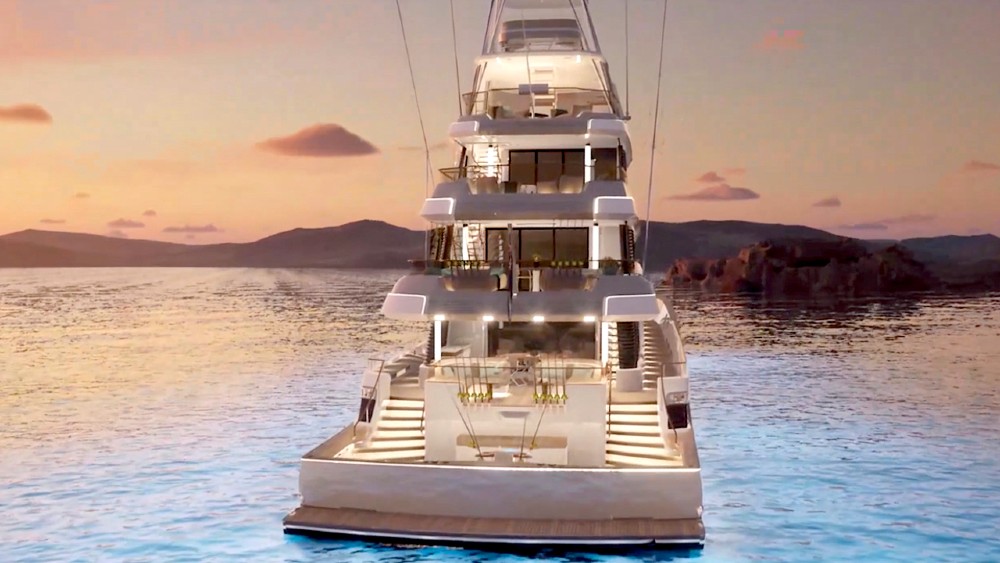 Like every sportfishing boat, the focus is the cockpit, with a fighting chair in the centre and multiple rocket launchers. The decks above are for ringside views of the action. Courtesy Vripack

Bouwhuis is quick to point out “this is a sport fisher first, and superyacht second. While she will have the luxury of a true superyacht, she’ll set a new benchmark in the world of big-game fishing boats.”

Renderings from Vripack show a towering, six-deck fishing machine with the sleek proportions of smaller battlewagons from American builders like Viking, Hatteras and Jarrett Bay.

To shave weight, and help achieve a targeted 30-knot-plus top speed, the hull and superstructure will be made of Alustar aluminium, a super-strong, high-tensile alloy. Bouwhuis won’t reveal the yacht’s power, though the word “huge” comes out in the conversation. “You can’t fool nature if you want a 171-foot boat to go 30 knots,” he says. “It will have significant horsepower.” 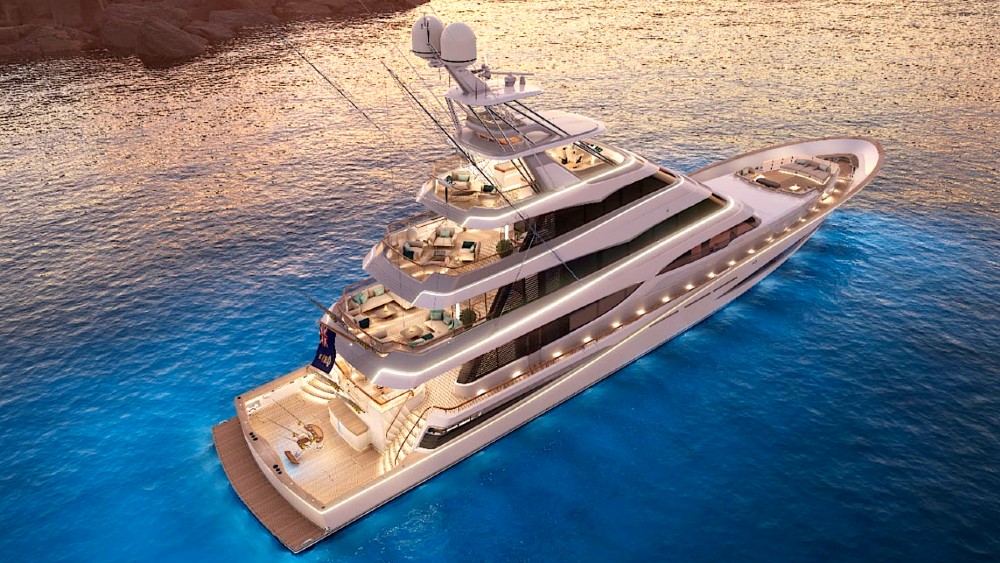 The yacht has been commissioned by an experienced owner who is passionate about big-game fishing. “There are yachts out there that label themselves ‘sport fishermen,’ but they tend to be big motoryachts with a small fishing cockpit on back. Project 406 stays true to the traditional proportions.”

That means an oversized stern cockpit that’s low to the water, with a classic varnished-wood fighting chair takes centre stage. Each of the decks above it will face the stern to give guests a front-row view of the sportfishing action below. For thrill-seekers, the very top deck, high above the flybridge hardtop, will provide stunning 360-degree views of the water. Perfect for spotting leaping marlin.

When the fish aren’t biting, Project 406 will offer guests plenty of places to kick back and relax. On the bow is an expansive, sunken sun-lounging area with oversize pads and sofas. The yacht’s fourth-level sky lounge will serve as an extraordinary “theatre” for watching big-game fish leap out of the water. At night, it will have the relaxed ambience and stunning views of a boutique hotel penthouse. 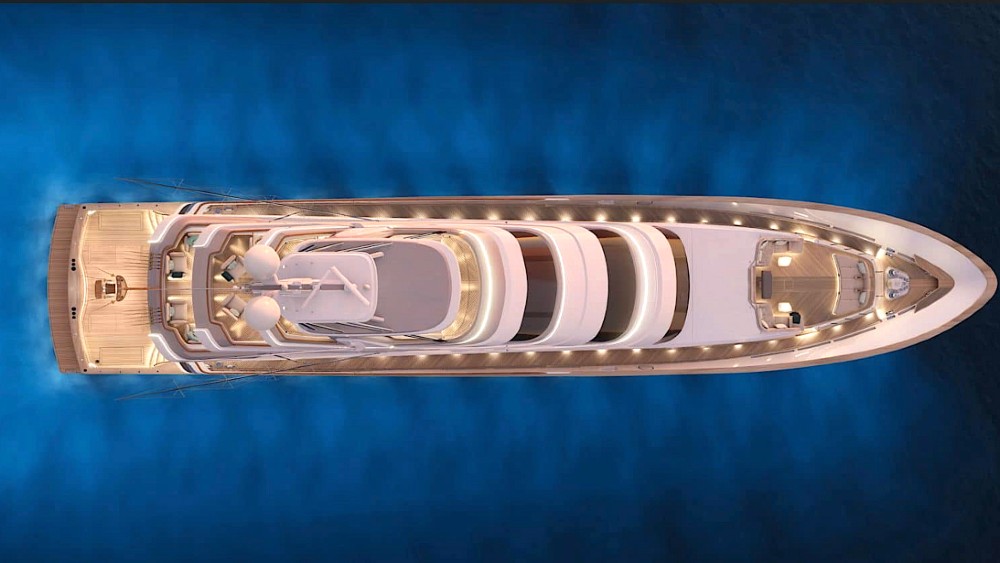 When not in sport fishing mode, the outer decks can be used for socialising, especially the open area in the bow. Courtesy Vripack

“It has been a steep learning curve for the whole Vripack team, discovering what makes a great sport fishing boat and understanding what kind of features are needed—from the rods, to the baitwells, the icemakers and fish boxes,” says Bouwhuis, who notes Project 406 is scheduled to be completed in 2023. “But it has definitely been an exciting challenge.”

It’s hard to understand the unbridled passion for fishing, especially when discussing the world’s largest sport fishing boat.  But actor Lee Marvin summed up the feeling nicely: “I only make movies to finance my fishing.”