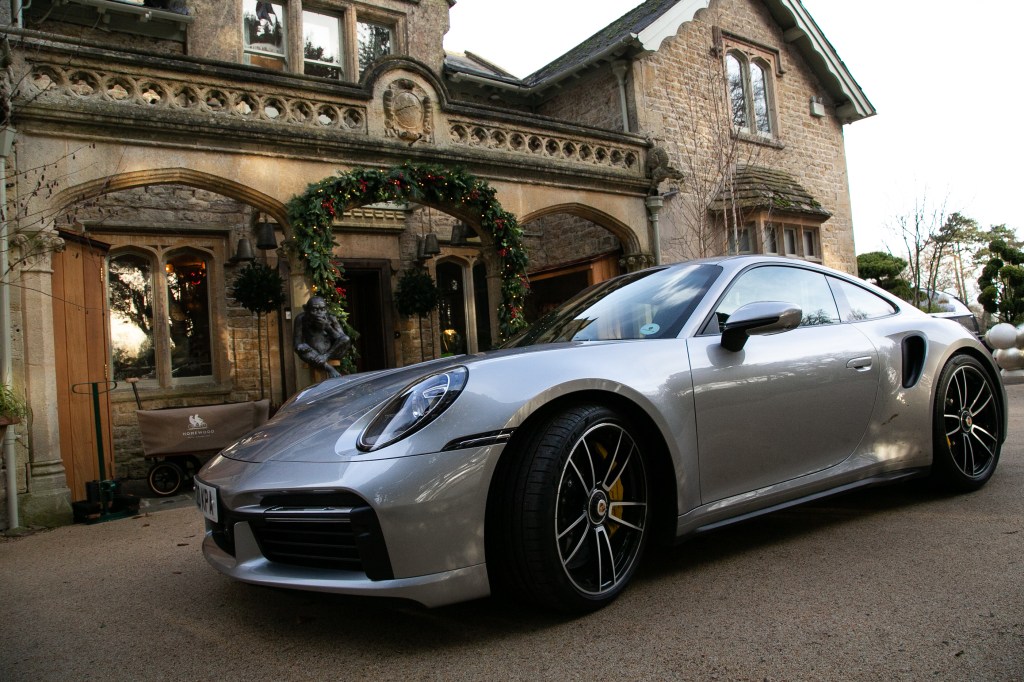 After Lockdown 2.0 finally bowed and exited stage right, my wife and I made our own exit from the big city to more rural, peaceful surroundings. It’s a complete coincidence that the weekend we spent at the charming Homewood Hotel, just outside Bath, was the first weekend after Boris (once again) released the country from the clutches of isolation. But the timing couldn’t have been better; if we weren’t craving this scenic idyll before, we certainly were by the beginning of December. With patience wearing thin and the general feeling of gloom there couldn’t be a better time to get away, reconnect and indulge in some much-needed R&R.

An understated, classy and tasteful hotel like Homewood required a car of similar characteristics to carry us there – cue, the Porsche 911 Turbo S. The 911 is probably one of the most iconic car models ever made, it has been going longer than any other single model of car and is seen as a benchmark of sporting refinement and German engineering. Yes, Clarkson may love to mock it as being a glorified Beetle, but that doesn’t stop me wanting to tick that box on my automotive journey. 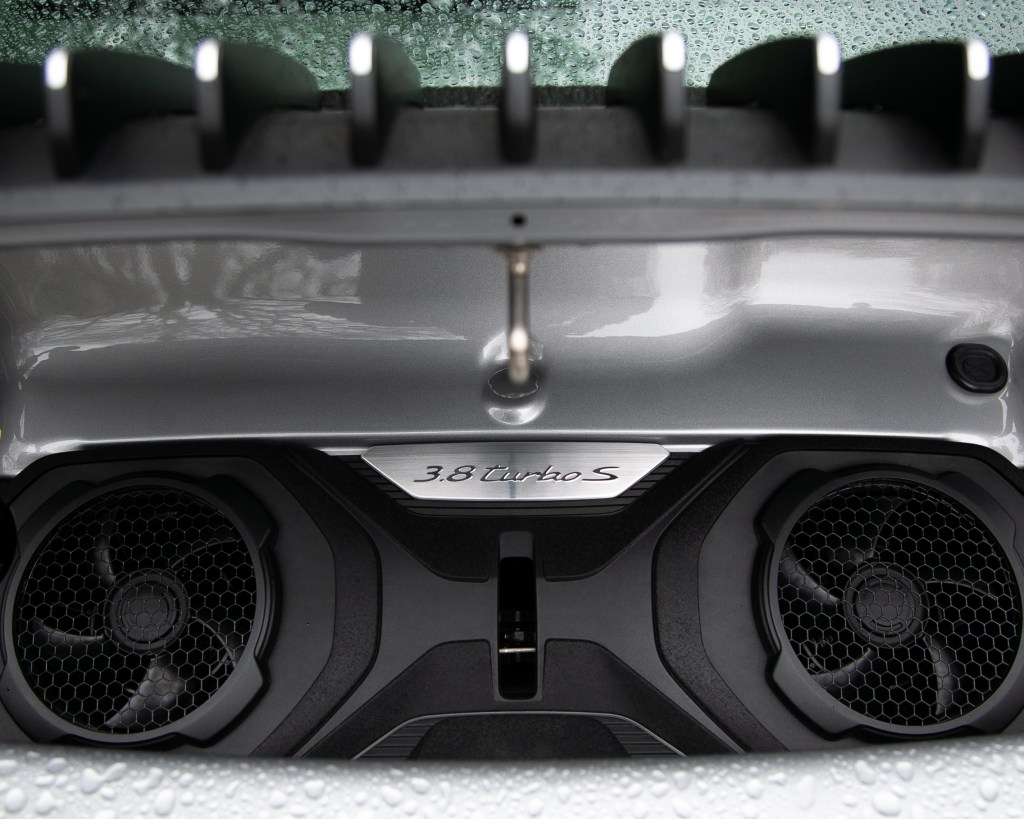 The 911 has been a gradual and progressive adaptation of the design for a Beetle, true (there’s a certain stubbornness to embracing the fact that the engine’s basically in the wrong place). However, the clever minds in Stuttgart have rolled with it since day one and created some of the greatest sportscars ever made. As a predictable petrolhead I’ve always put Ferraris, Aston Martins and Lamborghinis at the top of my vehicular tree, so never craved the 911 experience with the same boyish enthusiasm – but still, I’m not going to say no 650bhp am I?

As the name suggests, Homewood is a homely and inviting place, and arriving in something more demonstrative would feel crass – this is a place to relax in privacy, not shout about how well you’ve done in the last quarter. After a comfortable and smooth trip down from London we arrived at Homewood – a large country house clad in archetypal Bath stone and festive decorations. The 911 is also a nice place to be, its interior smothered in alcantara, soft leather and well considered technology. As ever, the Germans present us with understated quality, but in this instance not lacking in charm – even my wife reflected on how comfy and cosy it was. She can be a tough crowd in automotive surroundings: this was a big win for the Porsche. 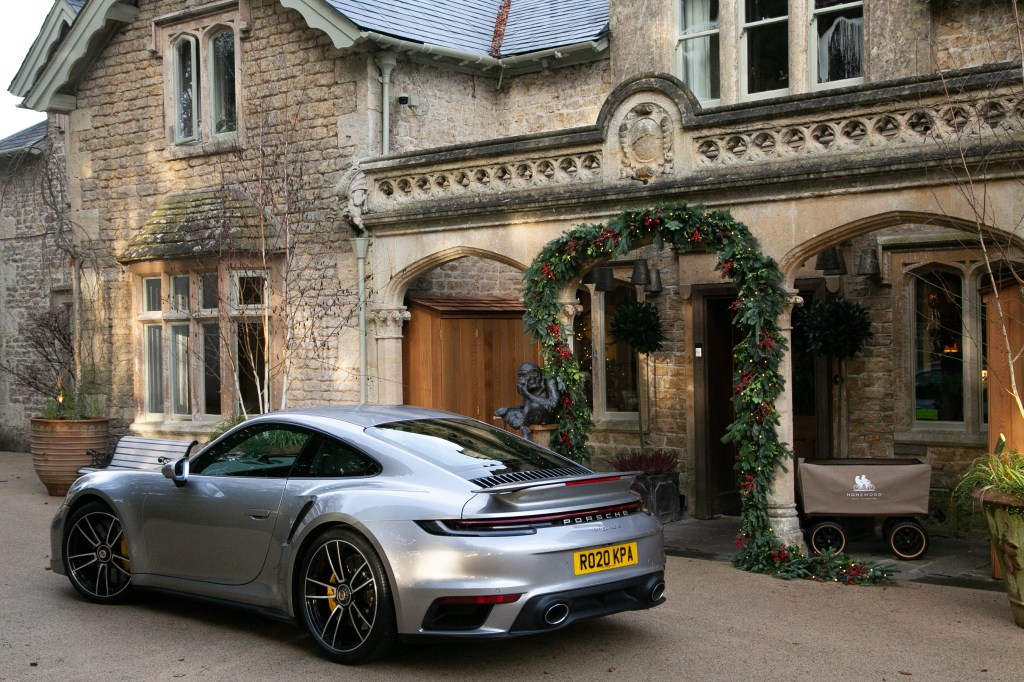 Remodelled and reinvigorated by Ian and Christa Taylor over the last couple years, this version of Homewood only opened in January of this year (not the ideal year for any hotelier). The current climate hasn’t dampened their style or verve: the hotel has a wonderfully playful quality in its design and decoration – from a wall of clocks to a ceiling of chandeliers, it’s pitched somewhere between Alice in Wonderland and Soho House.

Our room was fabulously jazzy and dripping in art deco touches mixed with modernity: monochrome wall art meeting with a bright red SMEG coffee machine made for unique surrounds. What this boutique hotel manages perfectly is to make it feel like your own home whilst not losing any of the five-star service you’d expect at a larger, grander property. There’s nothing quite like sitting next to a roaring fire, with the perfect Negroni in hand, knowing that you didn’t have to bring either of them to life. 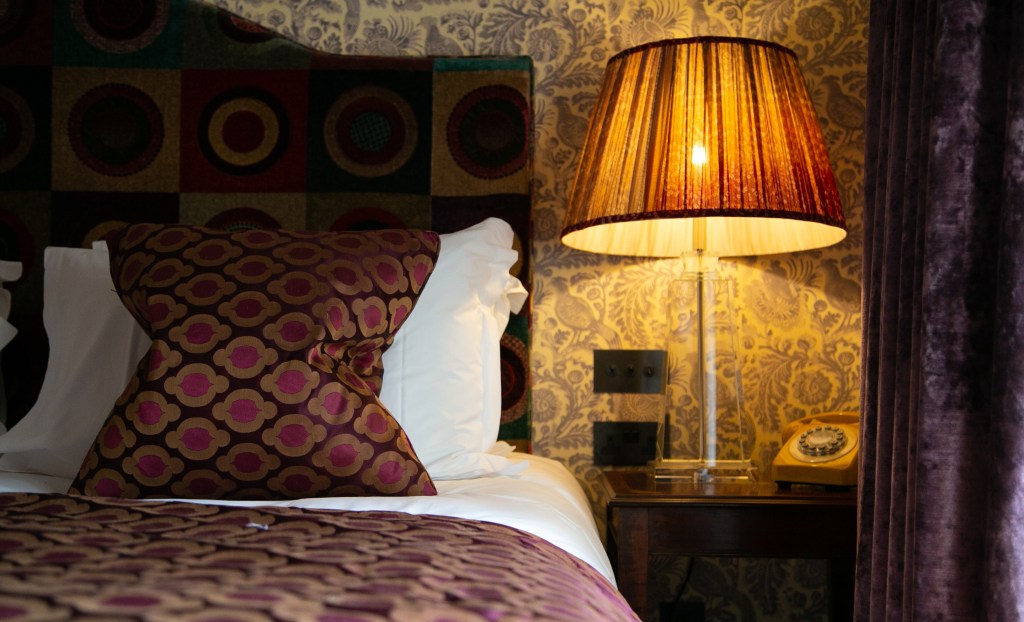 One evening meal – one of the best fish and chips I’ve ever had later – and it’s time for a serious night’s sleep in a titanic double bed (I’m not sure what comes after Queen and King size? Pharaoh size?). I’m fairly sure I could’ve slept for 27 years in it, had it not been for the TV in the next room, cranked up to 11. Thankfully we moved rooms for night two, which wasn’t a problem: a boutique hotel is, after all, a house and in houses you hear floors creak, doors shut and your parents’ TV compensating for their ailing eardrums.

After a decadent breakfast in bed (we were lucky not to lose the fresh pastries in the oceanic duvet), I nipped off to give the 911 a proper thrashing around the Somerset surrounds before rejoining my wife at the small but well appointed, spa. As ever with today’s endlessly powerful sportscars, it’s impossible to truly open their vast pipes – but I gave it a good try on the winding, graceful roads around Bath. Needless to say, it took all of 8.9 seconds to accept the fact I was a 911 convert – and in that time I could’ve rocketed to 124mph. Apparently this makes it the fastest Turbo ever, which I can believe given that the 0-60 stat is 2.7 seconds and it has a top speed of 205mph. It’s staggeringly quick on paper, yet so refined and elegant it’d seem impolite to push it anywhere near those limits: like bungy-jumping with the Duchess of Cambridge, it’s possible but a little inappropriate. 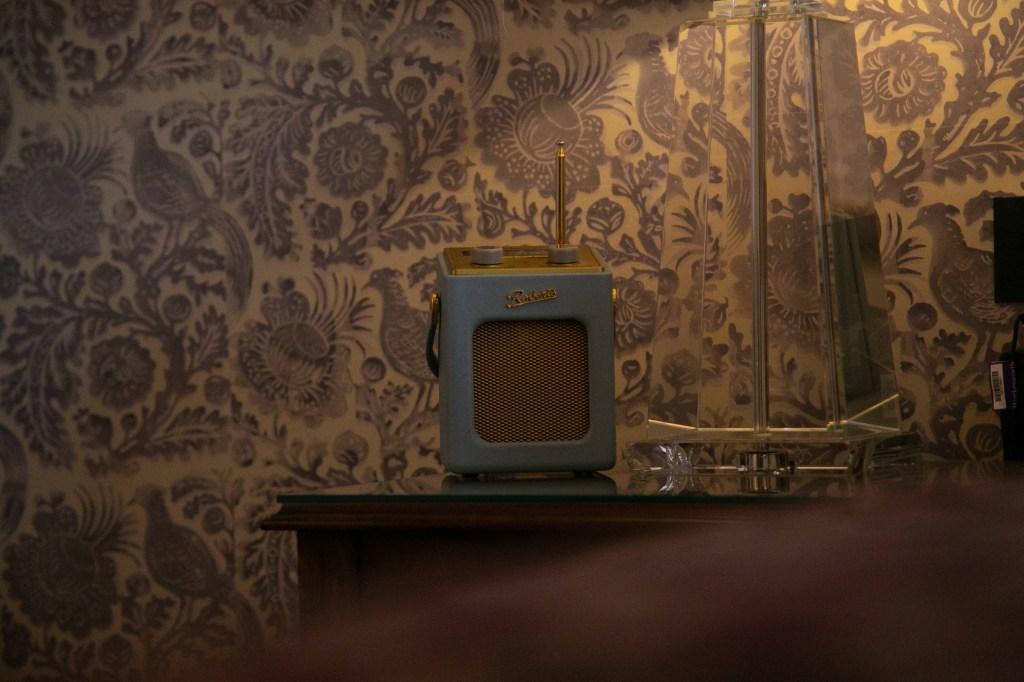 No SMEG coffee machine in this room, but it was instead furnished with a yellow telephone, baby blue Roberts radio and black marble bathroom, giving the whole that fun eccentricity seen in the rest of the property. Dinner, my first foray into Christmas cuisine for 2020, was all about opting for the Roast Turkey with all the trimmings. Usually, I’d avoid this as nothing compares to a home roast by my mother: however this was as close to a home Christmas dinner as I’ve ever come – complete with excessive amounts of everything covered in lashings of gravy. Devoured by us both we waddled back to our room full of the joys of Christmas, and probably a generous hangover. 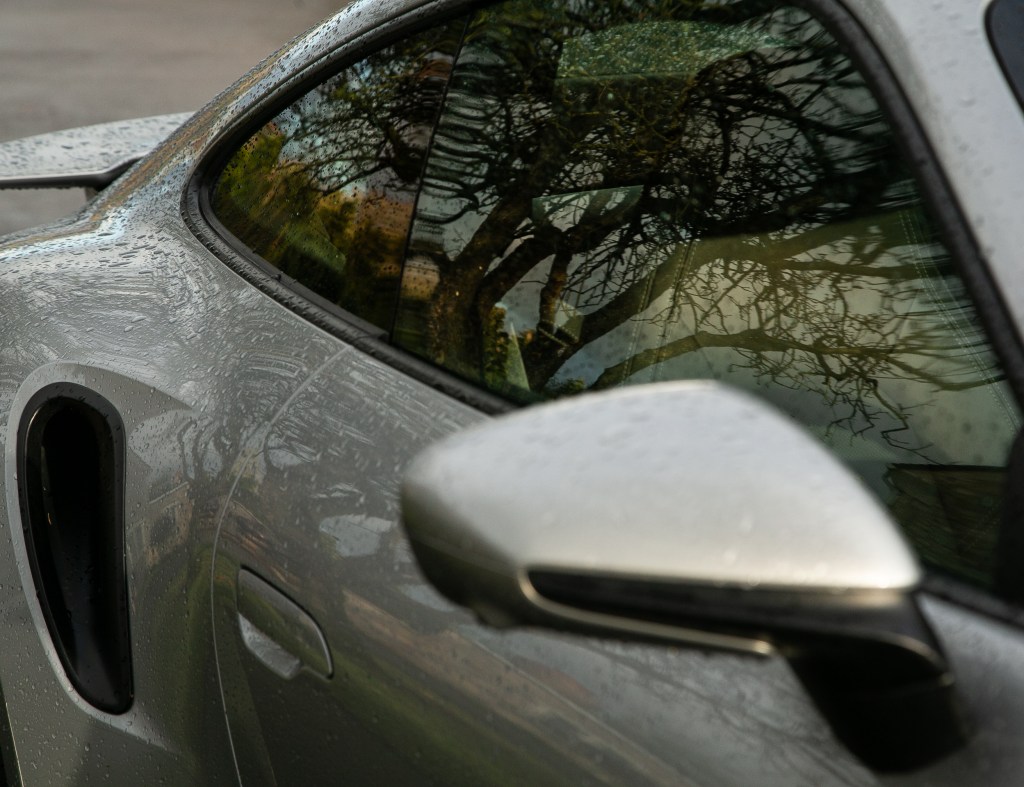 After a long and suitably muddy Sunday walk in the surrounding countryside (guided by a neat map supplied by reception) and a hearty Sunday roast at the nearby Inn at Freshford, we packed our bags and said our goodbyes.

On reflection, Homewood feels like you’re visiting your retired parents who have moved to the countryside after a successful life in the city. They’ve brought with them their style and their plush furniture whilst retaining a cosmopolitan desire for cocktails and fine dining.

If the owners are attempting to create a home from home, they’ve done a wonderful job: it’s comforting, caring and familiar – and a 911 looks completely appropriate parked-up outside. 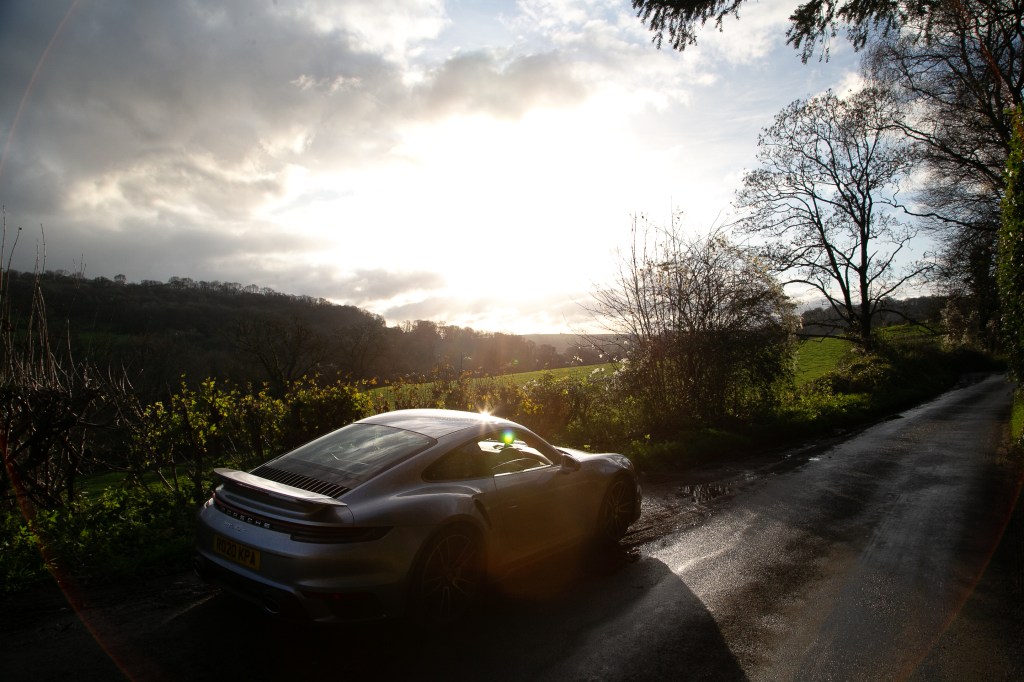