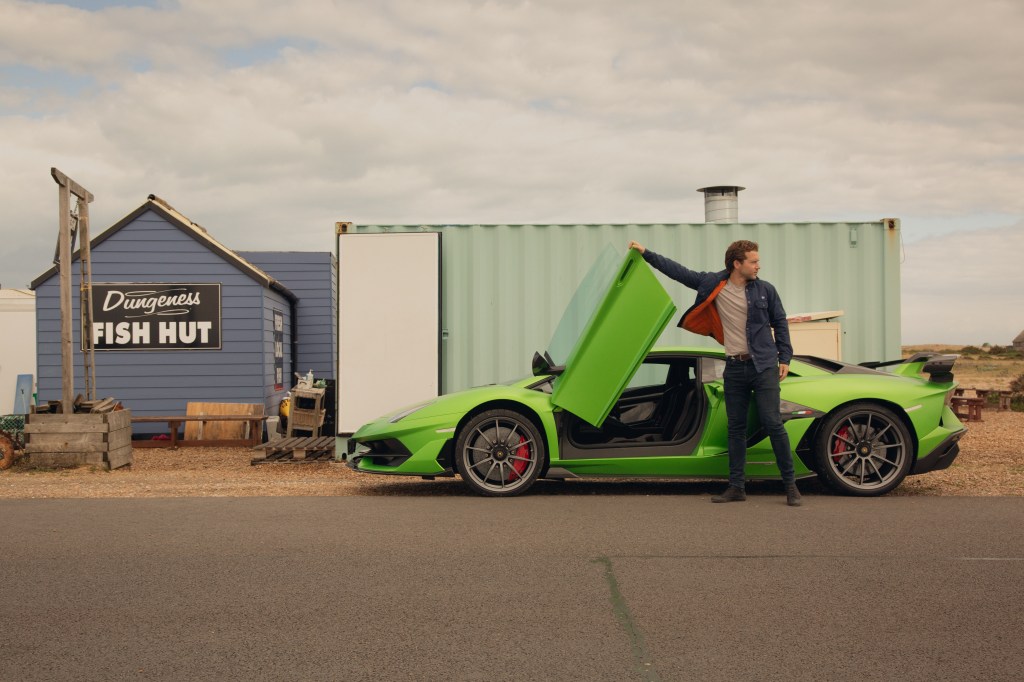 I wonder if, back in the Jurassic period, the resident dinosaurs had an inkling that their days were numbered? If so, how did it make them feel? Did the T-Rex have one last spree of rage and destruction, just for the hell of it? Were the Pterodactyls doing loop-de-loops and barrel rolls to get their final fill before the meteor hit? As I’m clearly not quite the palaeontologist Ross Geller is, I have no idea: however, blasting a 6.5L V12 Lamborghini Aventador SVJ around the pebbly desert of Dungeness gave me a little taste of what that might have felt like.

Never one to waste a metaphor, I’m talking here about a type of supercar that may not be long for this world: naturally aspirated, fossil fuel-devouring, grotesque and completely ridiculous. This is what the Italians do best – and I worry that it may be its final hours – so I’m glad I had to the chance to drag photographer Michael Shelford to the dramatic landscape of Romney Marsh to show him what £370,000 can buy you.

“Like a three-bedroom house” was his first observation, a reference to the price – which was fair. “Conducive to double knee replacement surgery” was his less ecstatic second – also fair. To approach a car like this with logic or any semblance of consumer advice is like discussing the advantages of having a solid gold toilet: if you want one, you’ll buy one, but there’s no need for it.

I’ve driven some serious cars in my time – and this car was something different. Firstly, it’s neon green. Matte neon green: the most extraordinary paint job you’ll see outside of an art gallery. Secondly, it’s also the size of a three-bedroom house, longer than The River Nile, wider than a jumbo jet and a toddler could see over its roof. Its proportions are pure pin-up supercar theatricality – and I love that about it. Not a single person walked by it without turning their heads – everything you’d expect from a full-blooded Lamborghini.

After a slow and rather unpleasant negotiation of West London’s speed bumps and traffic lights, we finally found our way out in search of more inviting roads. Honestly, how (and more importantly why) people own and drive a car like this around London baffles me. It is a singularly exhausting and time-consuming procedure, which is only briefly injected with the ego-massaging feeling of being admired by the public.

Once and some favourable A-roads were found, I did try to open the taps somewhat – and what taps they are. I mean, it goes without saying that a car like this will never be fully appreciated on anything other than a racetrack. SVJ stands for Superveloce Jota, with the “Jota” part literally meaning “Track” – this is a bona fide racing car: stripped out, leaned down, emptied of most frills and instead just filled with clever things that will make it go very, very fast around a racetrack. So fast in fact that it set the quickest lap time for a production car around the Nürburgring. So, for me to be sitting at 36mph behind a bus on an A-road is a bit like seeing Usain Bolt crawling on his belly around the Olympic Park – stupid, and a bit embarrassing.

After much practice, I finally figured out how to change gear without jerking Michael around so much he spilt his coffee; the SVJ comes fitted with a relic of a single clutch system which makes one feel like they’ve stepped into Richard Gere’s character in Pretty Woman – hopelessly trying to ‘drive stick’ in a 90’s Lotus Espirit. Sadly, unlike Julia Roberts’ smile, Dungeness is a bleak and brutal vision hanging off the bottom of Kent – it’s littered with fisherman’s cabins, biodegrading marine oddities and a smattering of Shoreditch hipsters renting out its new swathe of trendy Airbnb’s.

But the main feeling is one of abandoned emptiness, a strange eeriness in the air that was brusquely broken by the cacophonous exhaust of this mighty green monster. The only noticeable landmark to puncture the horizon is a pair of nuclear power stations (creatively named A and B) – one is decommissioned, whilst the other soldiers on thanks to EDF’s takeover. Although visually the Lambo and the industrial back drop couldn’t be more different, they share a power that is hard to fathom – 759 bhp being the automotive equivalent of a nuclear reactor.

In need of some rest from the gearbox, Michael and I sat and ate fish and chips on socially distanced pub tables and watched as the public looked at the SVJ and us, and then back again – clearly trying to figure out who we are, what we were doing and (due to the foreign plates) what part of Italy we were from. It’s an interesting observation with a car like this: it is so demonstrative, rare (1 of 900 if you’re asking) and valuable that it leads people to ask different questions. A normal sports car may garner the odd “Nice wheels”, “How long have you had it?” or “Which model is that?” – but with this I had someone literally stop me in the road, come to the window and pointedly ask “What do you for a living?” It was as if there was a desire to try and understand how and why I owned something so ludicrous. There was genuine relief when I said it wasn’t mine or that it belonged to Lamborghini, as though they were waiting for the classic “I work in finance” (or “It’s my friend’s – he works in finance”).

As we made to leave the bizarre, post-apocalyptic vista we were stopped by a different type of passer-by: a mother pleading with me to give her son a quick trip round the block in the Lambo (“He’s car obsessed and may never get another chance!”). Warmed by the sight of this beaming petrolhead in short trousers, I of course said yes – thinking of how I dreamt of exactly the same thing every time I saw a supercar in the flesh. It’d be my pleasure. He was a cool little dude called Axel and I took him for quick spin around the block, chatting about cars as we went – it was a joy. What wasn’t a joy was the line of kids that welcomed me as I returned young Axel to his mother (somehow word had spread, and me and the car had turned into a fair ground ride; everyone within a five-mile radius wanted a go. The gleeful faces encouraged me to channel Tom Cruise on the red carpet and accept that I had the power to make their day – not something many cars can claim.

Although it was a slightly tiring end to the trip, I couldn’t ignore the effect a car like this has on people – its theatricality, its rarity and the sheer joy it puts on people’s faces. (Well, under 12s and adults with the mentality of under 12s.) Michael and I finally pointed the shark-like, angular nose away from the beach and roared off to the city – using about two percent of its 217mph top speed.

As with all car companies today, Lamborghini will increasingly move towards turbo-charged engines, partial battery power and eventually all-electric, making beasts like this a carbon-fibre dinosaur of the past. I’m just glad I got a chance to get behind the wheel of something so spectacularly outlandish: it’s the only car that has ever made me laugh out loud every time I put my foot down. At the end of the day, life’s too short, so if you want a solid gold toilet – you go for it.