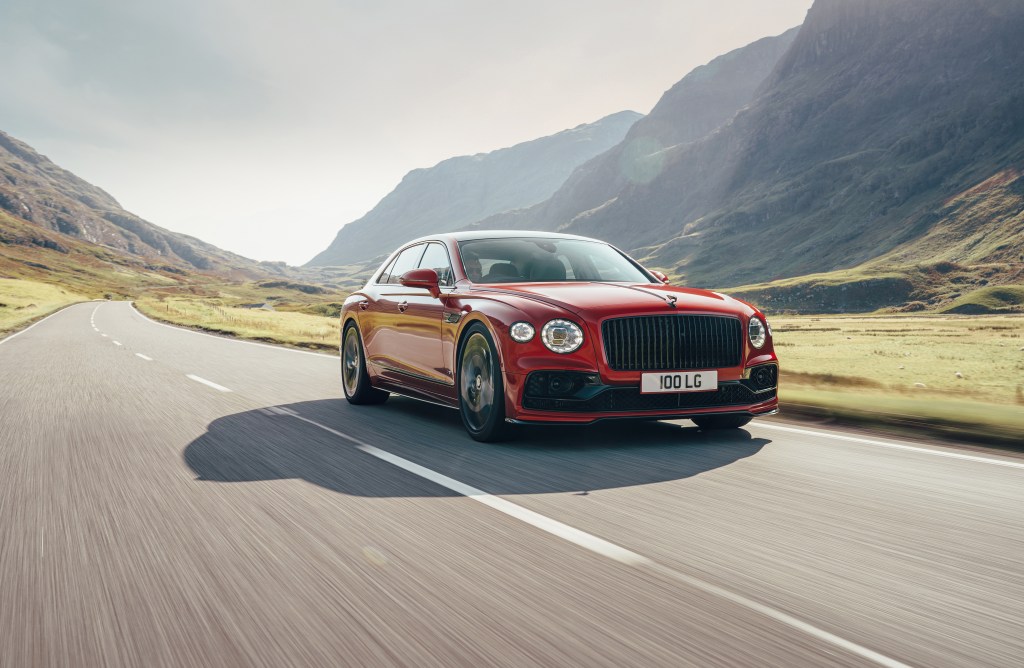 A number of years ago, my wife and I joined some old friends for a spot of canal boating. The plan was to drift carelessly along a passive waterway somewhere up north, soaking in the bucolic British countryside with a cup of a tea and a scone in hand as we went.

Everything was going about as swimmingly as it could until I was invited to put down the strawberry jam, and take the helm instead. This ruined everything, because driving a barge (you drive a barge, right?) is easily the most boring activity in the world. I’ve had more fun with a potato peeler. 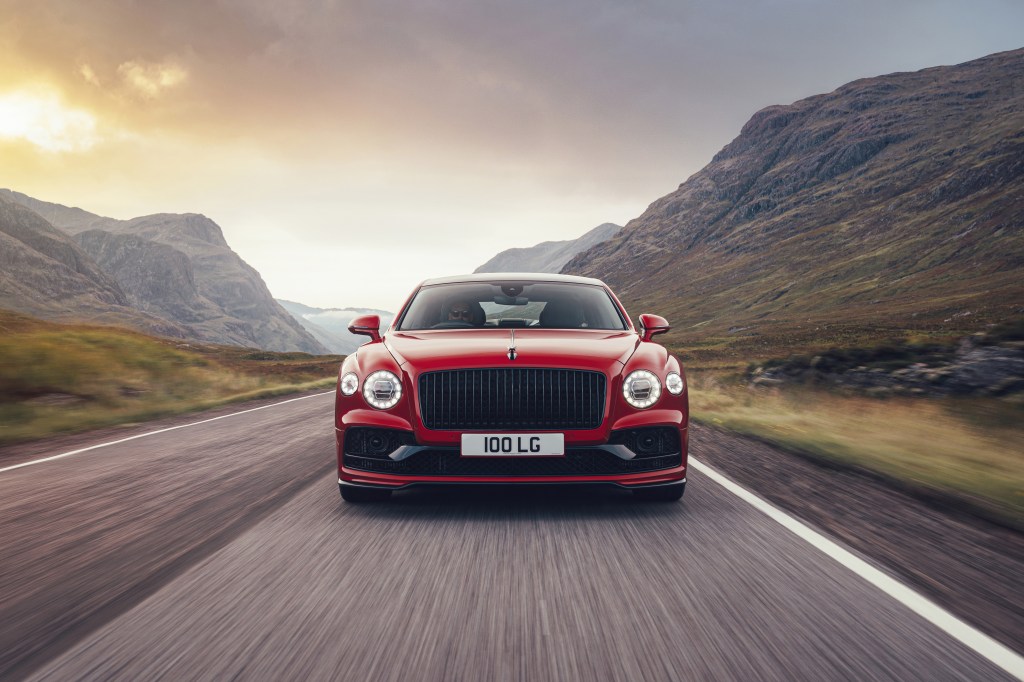 Thoughts of this meanderthon returned to me, somewhat awkwardly, when I first laid eyes on Bentley’s new Flying Spur V8 grand tourer (around £150,000-plus, depending on specs). The Crewe marque’s latest is longer than the Channel Tunnel, weighs about the same as a double decker bus and looks like it would have the turning circle of a whale shark. I wasn’t sure it would be any fun.

I also wasn’t quite sure what it was for. Until last year, Bentley made two perfectly good cars for the two sort of people who were likely two buy one. There was the Mulsanne, which was for newspaper magnates who want to sit in the back over butter-soft suspension so they don’t spill their champagne while they’re thumbing libel papers. But, like newspapers, that’s gone now. And then there was the ageing but still beautifully belligerent Continental GT, which is the sort of car people with very expensive hair buy so they can go 200mph on the autobahn. That’s still going. 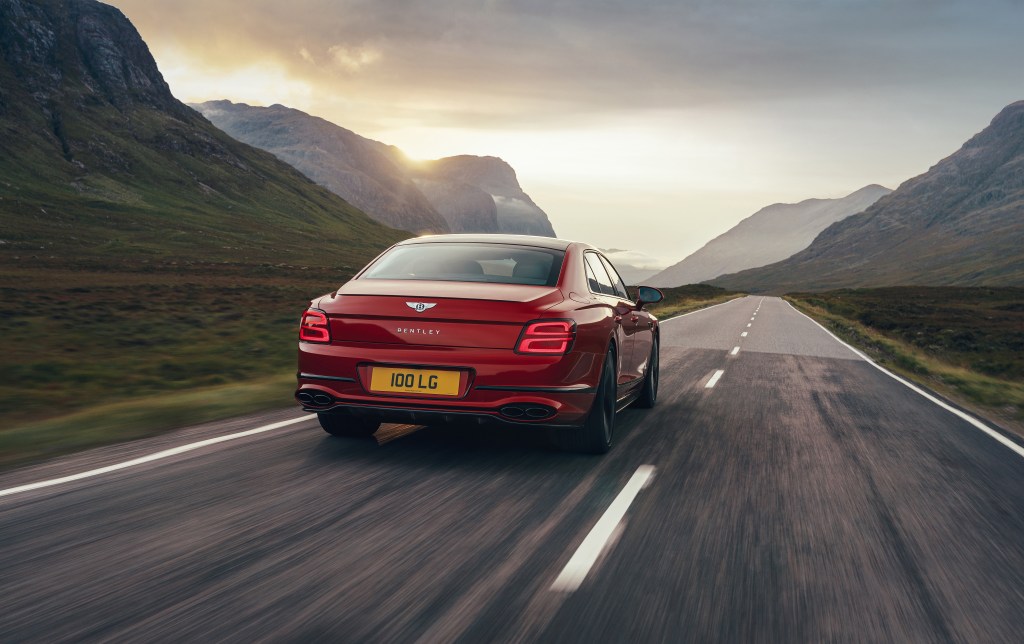 The current Flying Spur, introduced two years ago, sits somewhere in between. The idea seems to be a driver’s car you can be driven in. Perhaps it’s for people who can only afford a driver on Mondays and Thursdays. If you choose to drive, you should know that up front it’s got the sort of tucked-in cockpit experience that almost makes you forget you’re driving the Lusitania. There are lots of neatly arranged buttons, a chunky steering wheel and a glossy infotainment system with a screen that flips over when you start or stop the engine. It’s really very nice. The car is also noisy enough to rearrange your jowls.

We’ll come to that, but first, if you choose not to drive, that’s fine too, because it’s long enough to seat Richard Osman in the back without him having to fold his legs away. Ours came with seat massagers and a big touchscreen: at one point I thought might give my 11-year-old control over the engine. I didn’t. 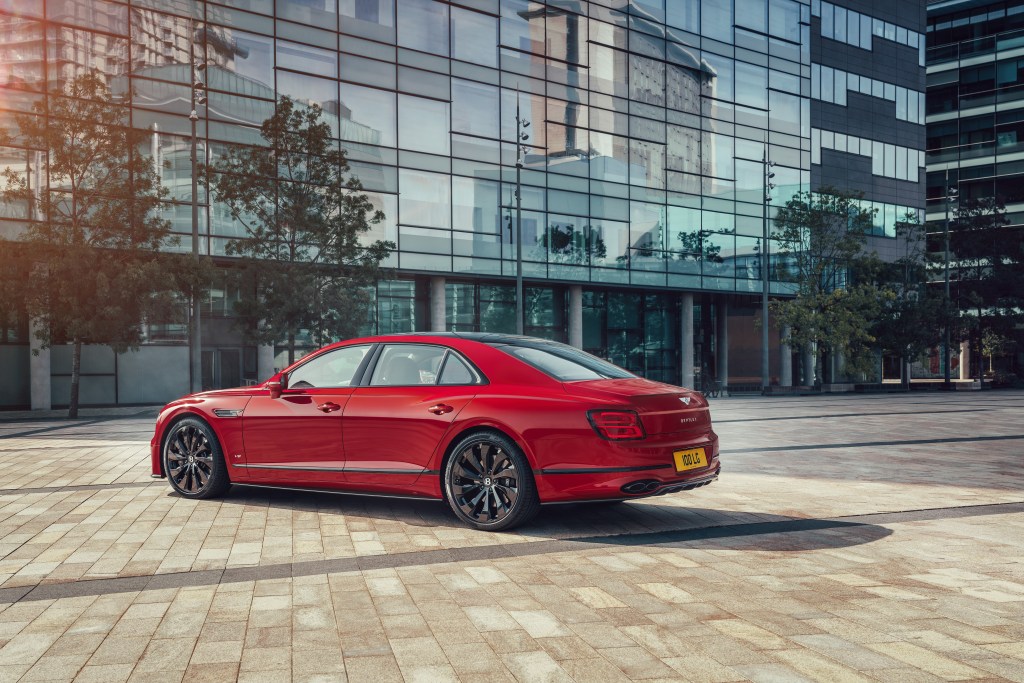 Speaking of the engine, what an engine it is. It’s a lovely, throaty thing with a vast amount of horsepower – I’ve stopped counting between 500 and 1,000 – so much that it will haul the car to 60mph in four seconds flat and on to a staggering 198mph. That would make it the world’s fastest full-size snooker table, but that honour goes to the Flying Spur’s more senior 6.0-litre W12, which will skin a cat faster than you can sneeze.

Anyway, what all this feels like for Richard Osman, I’m not quite sure as my driver was on one of his off days. Not that there was much chance of me handing over the keys, though. Because I enjoyed driving it enormously. Finding an entirely legitimate reason to venture beyond the supermarket, I did 250 miles in it in back-to-back stints, and when I got out I could barely remember where I’d been. All I could recall is that when you put your foot down in it, it gives you a multi-sensory autogasm. The sound! The speed! The smell of all that perforated leather! The impression that anything else on the road had sodding well better get out of the way! 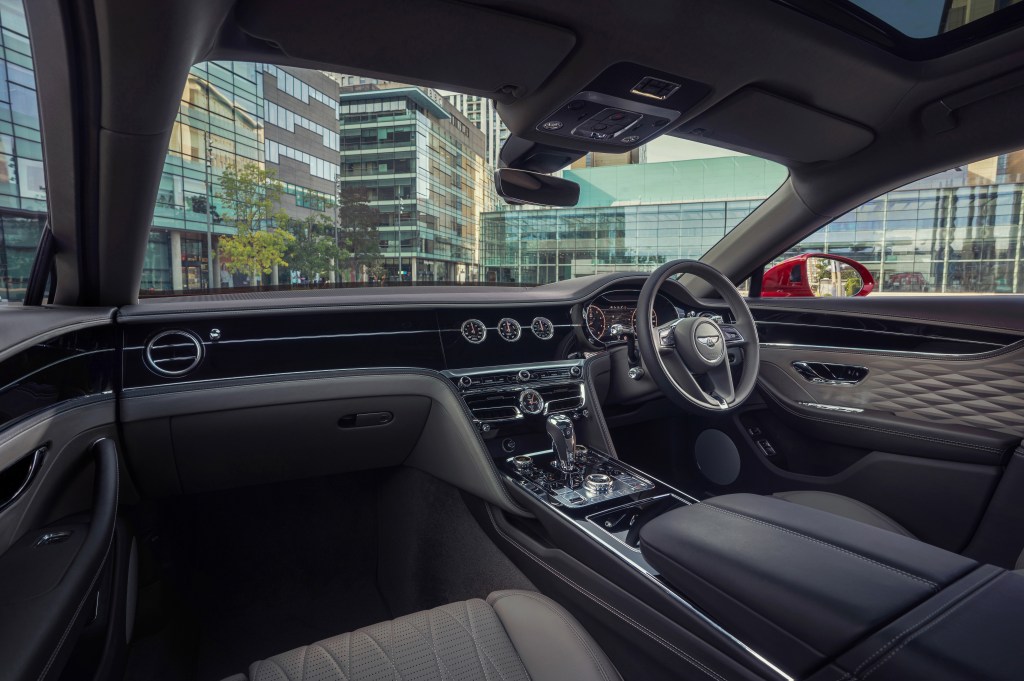 I also still wasn’t quite sure what I’d been driving. I mean, yes, it’s a Bentley Flying Spur V8, and yes, it’s new and shiny and big and expensive and very impressive and all that, but is it a Bentley? I suppose it depends on how you spec it. I’ve checked, and the only document longer than Bentley’s options list is Wikipedia.

No doubt there’s a middle-of-the-road beige combo out there, then, but mine was red and came with black alloys the size of dustbin lids and a retractable black Flying B – that, good to know, can be controlled from the back seats – on the end of the bonnet, 300 yards away. Despite the badging and the hand-stitching and the knurling and the heavy and really rather lovely scent of English coach-building, I struggled to marry all this to the classic British marque I grew up with. It was really quite lairy. 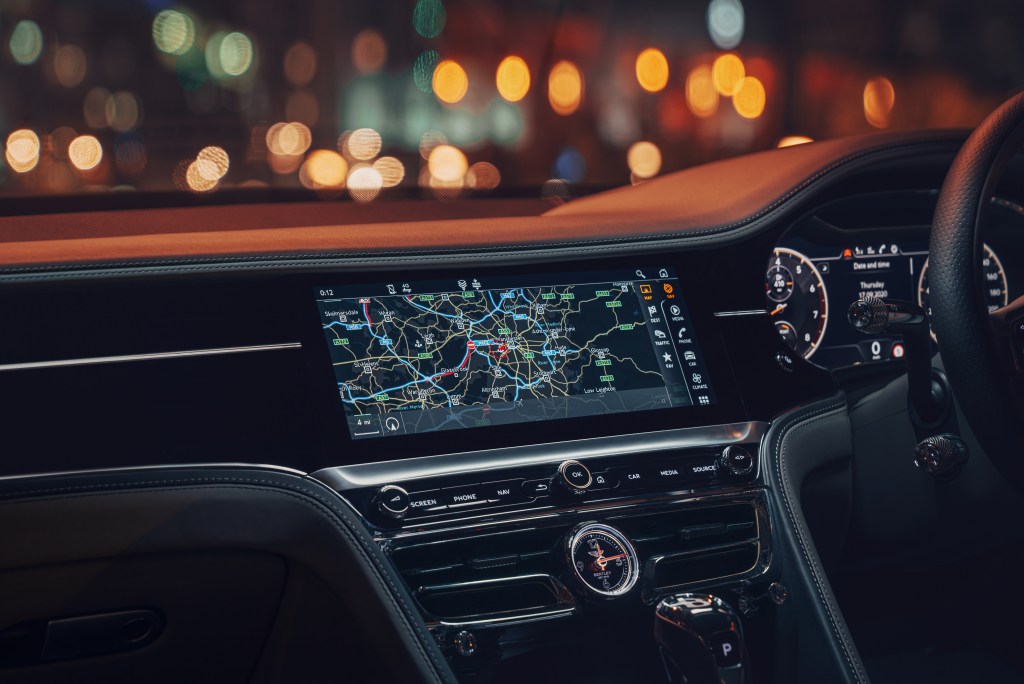 Sure, luxury is more rad these days, and thankfully the old-school thunderers the Queen moves her corgis around in are now relics of the past. But the thing is that driving this car wearing a hooded top and a baseball cap, I didn’t feel in any way as though it was too good for me. And, even if I like this idea of inclusive luxury doing the rounds at the moment that mitigates for that, I sort of want that from a Bentley. If ever I had one in my garage, I’d want to feel that it owned me more than I owned it. A Continental GT has that. The Mulsanne, which I’ve only ever been driven in, had that. But it’s not yet been replaced. Does the Flying Spur plug the hole? I think it’s something else altogether.

Which is absolutely fine. Because, unlike a canal boat, the Flying Spur V8 is the chauffeur car you’ll actually want to drive yourself. 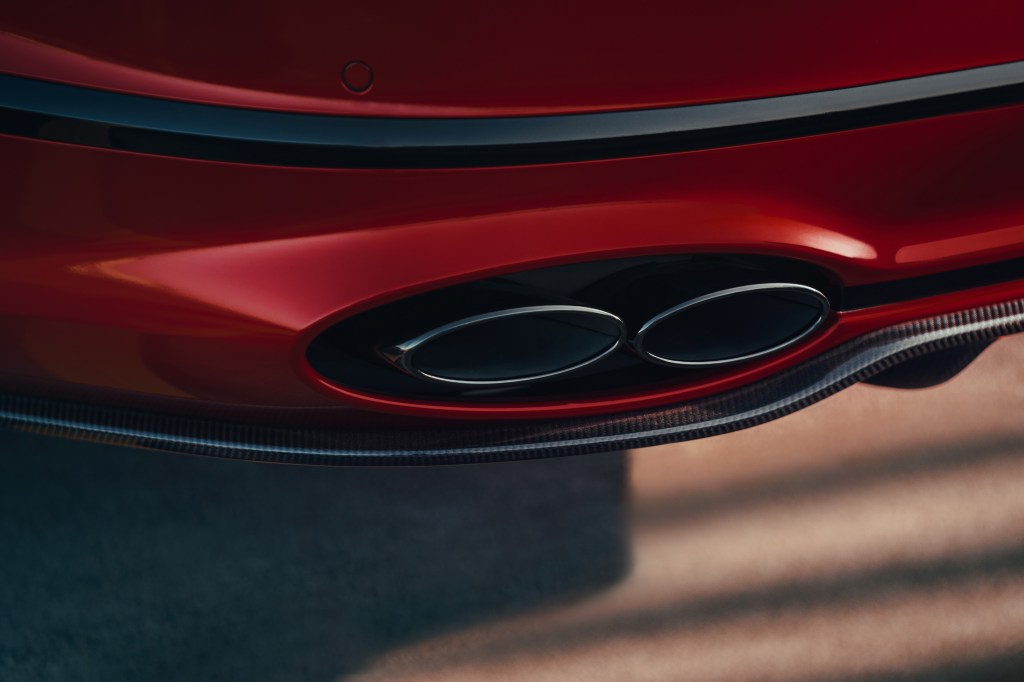 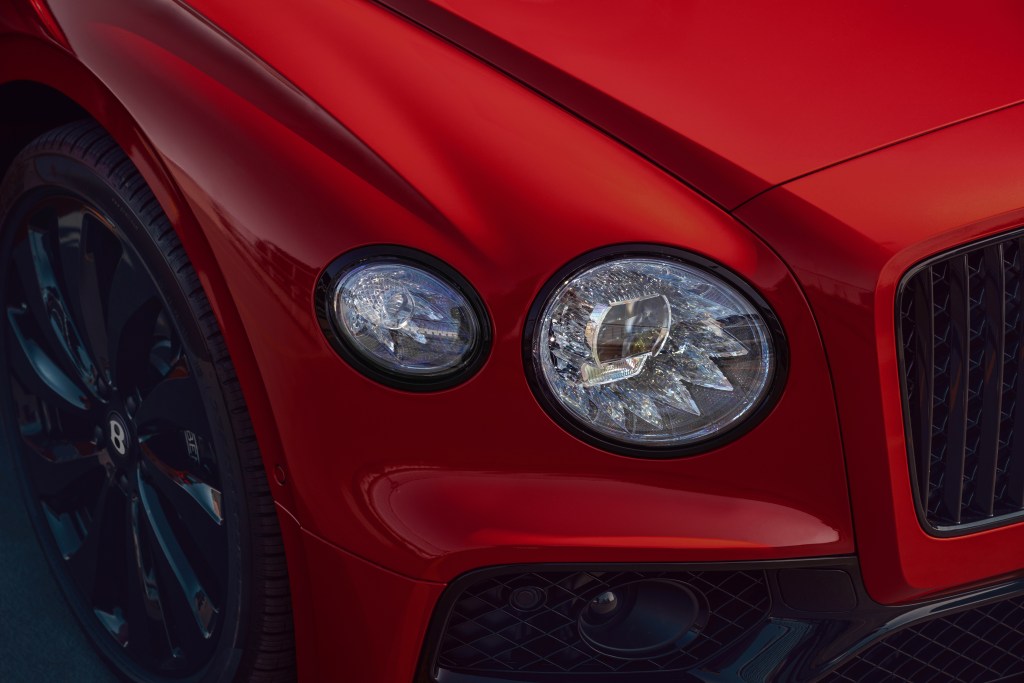 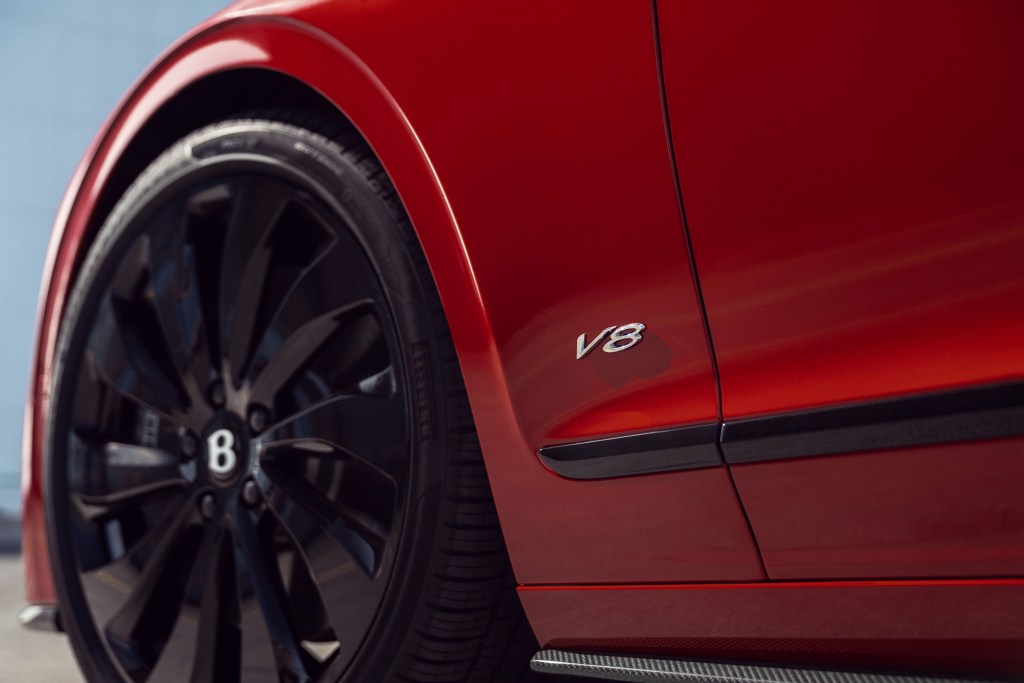 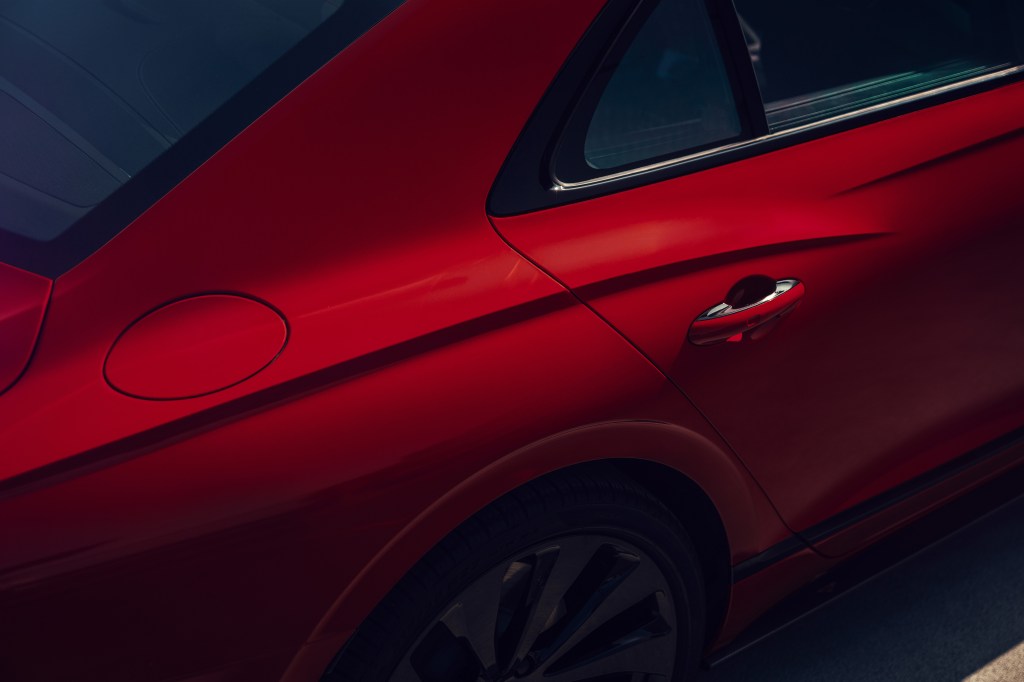 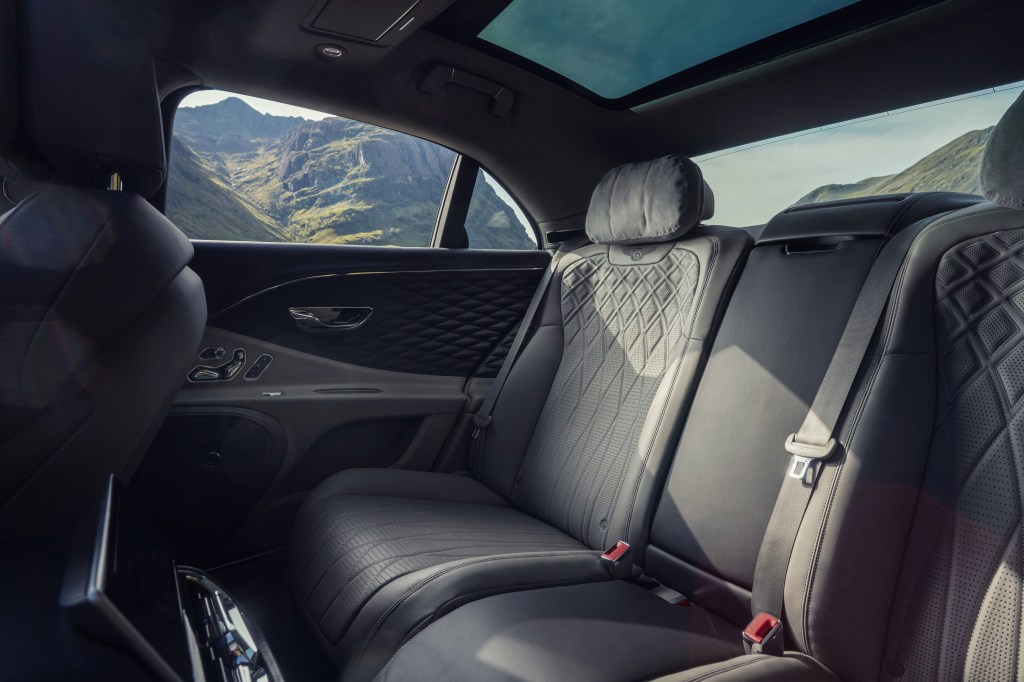 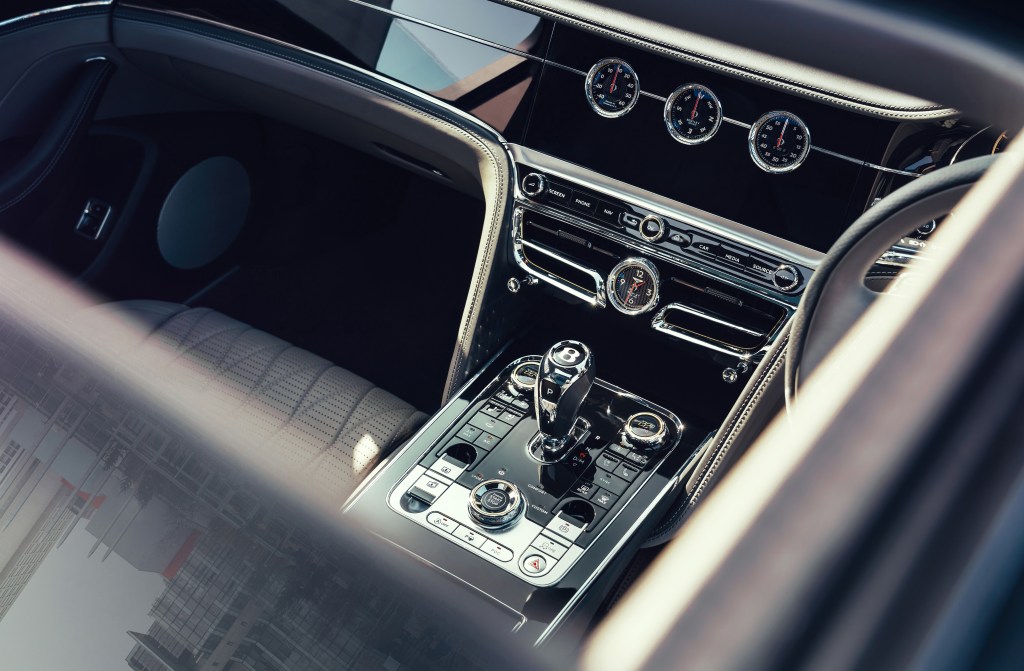 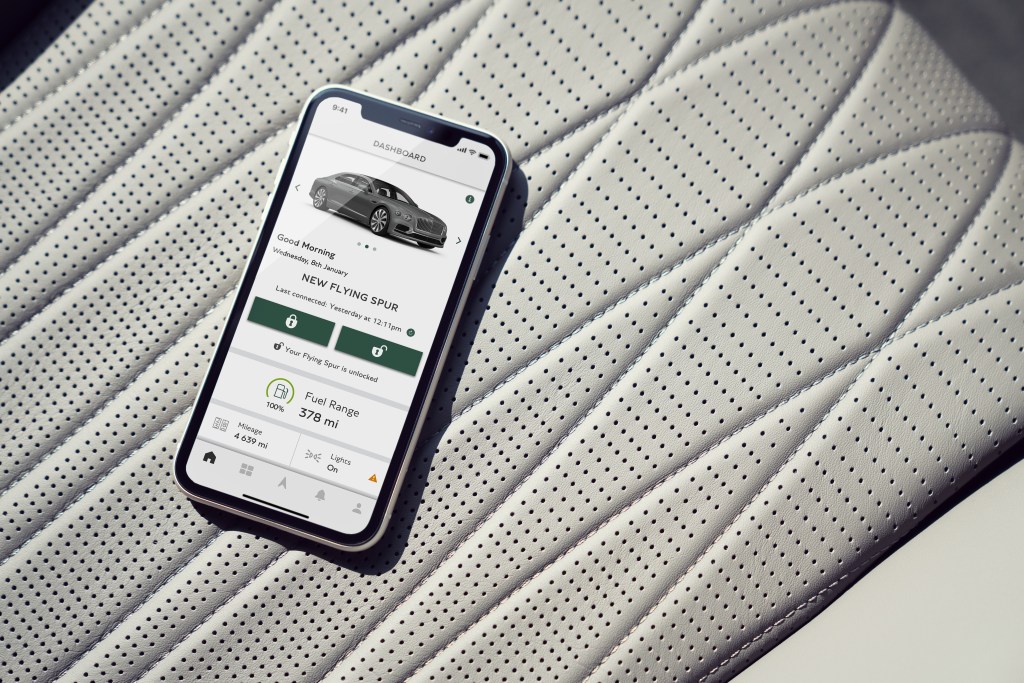