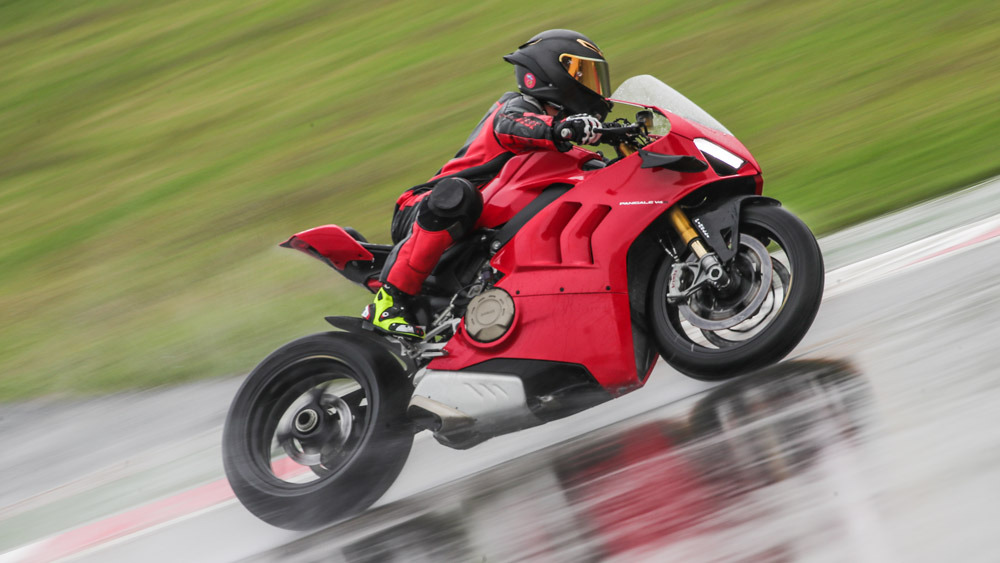 The Middle Eastern Kingdom of Bahrain is not an area you would associate with heavy rainfall, as an average of 2.8 inches per year falls on the tiny country. So, the last thing I expected was for any of it to fall on the day after I made the 17-hour flight east to ride the first major revision of the Ducati Panigale V4 S since its inception in 2018. But it did, and then some.

Yet despite my frustrations, the rain cascading down on the Bahrain International Circuit gave me a chance to really test the high-speed stability offered by the winged front-end of the 2020 Ducati Panigale V4 S.

Now equipped with a derivative of the Panigale V4 R front frame that’s a claimed 30 percent stiffer, and with the same wider and taller bodywork as the V4 R—with winglets mounted either side—the V4 S gets pushed into the tarmac with a potential downforce of 81 pounds at 186 mph. And let me assure you, the winglets do their job.

I topped the Panigale out at an indicated 297 km/h (184.5 mph) in the streaming wet, speeds rather terrifying given the fact you have almost half the available grip of a dry track, but the V4 S was rock solid as the water blasted against my AGV helmet’s screen.

Whereas the 2018 edition would get flighty at that speed, even in the dry, the 2020 edition is a revelation. The downforce works in three ways: first, as the speed rapidly increases, so does the downforce and thus mechanical grip takes over, forcing the front end down and largely mitigating the need for the power-sapping Ducati Wheelie Control (DWC) algorithm to kick in. Second, it keeps the bike firmly planted on the road at high speed. And, thirdly, all that downforce means that the simply brilliant Pirelli wet compound race tires we were using were already in solid contact with the ground, and thus ready to accept the braking and, eventually, cornering forces in a smoother, more controlled fashion than before. It’s a win-win-win.

Mechanical grip is always better than electronic grip, and Ducati has really turned a trick with the new Panigale V4 S. But it’s not only in the bodywork where Ducati has gone to work. The raucous, 214 hp, 1103 cc V4 Desmosedici Stradale is as it was from 2018, although the engineers have now fine-tuned the torque delivery in the first three gears. The latter makes the initial throttle-opening smoother and easier to control, which will be kinder to the throttle hands of all Panigale pilots, not just the less experienced ones.

The power delivery now doesn’t have that unnerving kick it once did from a closed throttle at low rpm, which brings with it the benefit of less tire degradation and a happier, more settled chassis as the speed rapidly increases.

On the suspension side, Ducati has kept the electronically controlled Öhlins Smart EC2 units it debuted in 2018, but the front and rear springs are now significantly softer for a plusher ride on the street. Given the fact I rode in the pouring rain, the softer set-up was perfect, and I suspect it will indeed translate to a better road ride, although the jury is out until the Panigale is put through its paces in anger in the dry.

Be that as it may, the improvements to Ducati’s main street superbike (the V4 R is essentially a race bike with lights) are indeed tangible and make for a more enjoyable riding experience, one more accessible to more riders.

And with the Panigale topping global sales in 2019 as the leading 1000 cc-plus superbike across all manufacturers, there’s a strong chance Ducati may have trouble keeping up with demand on this new and very much improved superbike. Now to find a dry racetrack. California Speedway, anyone?

Ducati’s Multistrada V4 Is the First Production Bike With Radar, and No One Saw It Coming