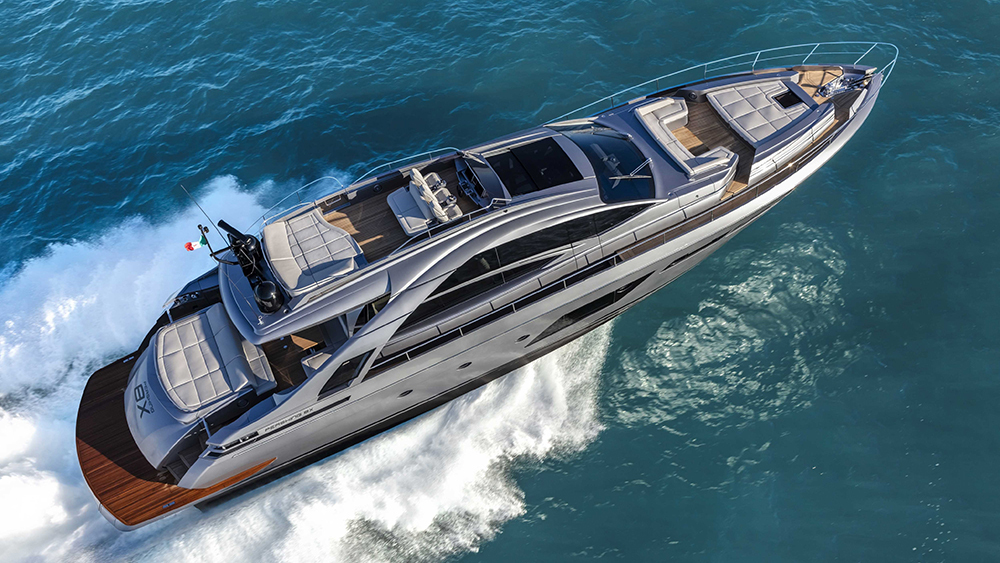 The Fort Lauderdale International Boat Show kicks off on October 30. The world’s largest in-water event, with more than 1,500 exhibits, will have a new Superyacht Village this year, featuring, among others, Excellence, the 262-foot queen of the show. Beyond this stunning new vessel by Abeking & Rasmussen, several yachts will present themselves to the market for the first time. Here are three A-listers to look for.

You can tell the Pershing 8X is an evolutionary leap beyond the last-generation Pershing 82 because of its music-infused hull. Ferretti Group shipbuilders and Videoworks, an Italian supplier of sci-fi-style helm stations, fitted a high-fidelity audio speaker inside the hull to provide underwater music for swimmers and divers around the yacht. The 83-footer has several other quirky but beautiful features. Its side wings, for instance, define the Pershing’s profile and provide the unique architecture for matching curved stairs (painted-black steel, covered in teak) that deliver a grand entrance from the cockpit to the upper helm area. Designed by Fulvio De Simoni, with input by Piero Ferrari (yes, that Ferrari), the 8X’s interior is generous, with a full-beam master suite, three more large staterooms and cabin space for three crew. With the 2,000 hp MTU M96 engines, the 8X has a top end of 45 knots.

The Palm Beach 70’s profile might be mistaken for a yacht built in Maine, with its unusual wood trim and teak deck, but the brand is actually rooted in Australia and builds vessels in Asia to exceptionally high standards. The new flagship is designed with a semi-displacement “warped” hull that provides a smooth ride in rough water, with almost no wake, and exceptional fuel efficiency. With twin Volvo IPS 1350s, the 70-footer tops out at 38 knots and cruises at 32 knots. The interior salon and dining areas are open-plan, defined by golden teak and light-colored decor. The flybridge offers privacy and a second helm. Soundproofing isolates engine noise and vibration as well as chatter from adjoining cabins. The bowrider helm has its own sound system. Palm Beach was able to conceal smart technology inside the traditional Down East design.

Francesco Guida designed the Extra line for ISA, the respected Italian shipyard, to create a new yachting experience. The designer focused on maximising interior space with generous, open-plan rooms and floor-to-ceiling windows that access exterior terraces via large glass doors. Guida’s goal was to create a villa-like interior bathed in natural light, while putting owners in touch with the sea when they are outside. Hence the ample cockpit space, not to mention a large upper helm and uncommonly spacious foredeck. Three Volvo IPS pods deliver a top end of 31 knots. Guida’s intelligent design will likely mean a long line of show enthusiasts.