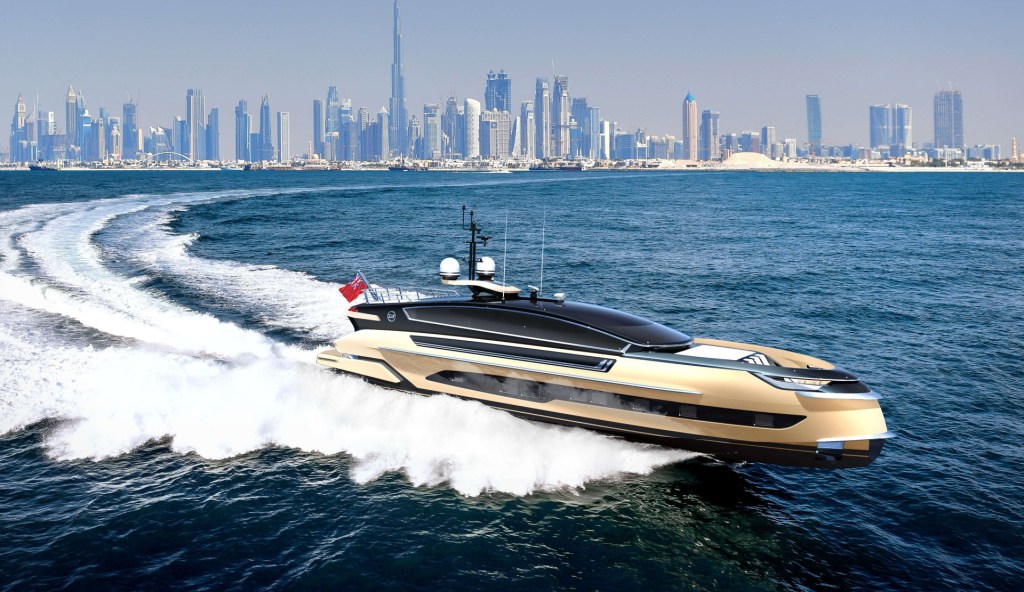 The Dynamiq GTM 90 was developed in partnership with Klassen, the German automotive tuning firm that customises automotive interiors for a select list of clients, including more than ten national presidents. The Italian yacht builder previously partnered with Porsche on its GTT 115, but the GTM 90 extends beyond automotive influences and into new-product design.

“We looked at the markets with more extreme climates where the yacht should be a shelter,” says Dynamiq founder and designer Sergei Dobroserdov. “Places like the Arabian peninsula, parts of Asia and northern Europe. These are where the yacht needs to be open and full of sea breeze by day, but almost closed when evening comes and the temperature rapidly drops.”

Instead of lengthening the yacht to include open and enclosed spaces, Dynamiq designed key areas to do double-duty. “The aft beach club, dining area and open-style galley with bar can be transformed in seconds using sliding doors and foldable bulwarks,” says Dobroserdov.

The yacht is designed for extreme weather conditions, with a winter-garden-style stern area that buttons up at night. Dynamiq Yachts

Several supercars inspired the shape of the superstructure, says Dobroserdov, while Van Oossanen Naval Architects in the Netherlands created a hard-chine hull that can top 30 knots with three 1350-hp Volvo Penta IPS pods. At much more efficient 17 knots, the GTM 90 has a range of 800 nautical miles.

Dynamiq’s interior stylist Giuseppina Arena worked closely with Klassen on the small details that define this first-edition GTM 90. They include rich wood panelling and Led courtesy lights, interior-décor mirrors and leather details. The idea was to incorporate the same levels of luxe quality and automotive styling as Klassen puts into its customized cars and vans. It was entirely responsible for the GTM 90’s wheelhouse.

The GTM 90 is a yacht where form and function do not compromise each other, but stand shoulder to shoulder. The Klassen-influenced salon and bar-galley overlook the aft beach club, which abuts the stern. When closed in with the glass panels, the large area provides a winter-garden effect that is typically found on much larger yachts.

The German tuning firm Klassen co-designed the GTM90, incorporating high-end automotive features across the interior, including the salon. Dynamiq Yachts

On the lower deck are three guest staterooms and a master suite. The master bedroom has a circular bed from the Bentley Home collection, while the master bathroom, finished in onyx, has a custom hammam for two. The GTM 90’s sound system is by Bowers & Wilkins, for a clear, refined sound across the yacht.

Dynamiq’s configurator gives the Klassen edition a starting price of €7.5 million or around £6 million.