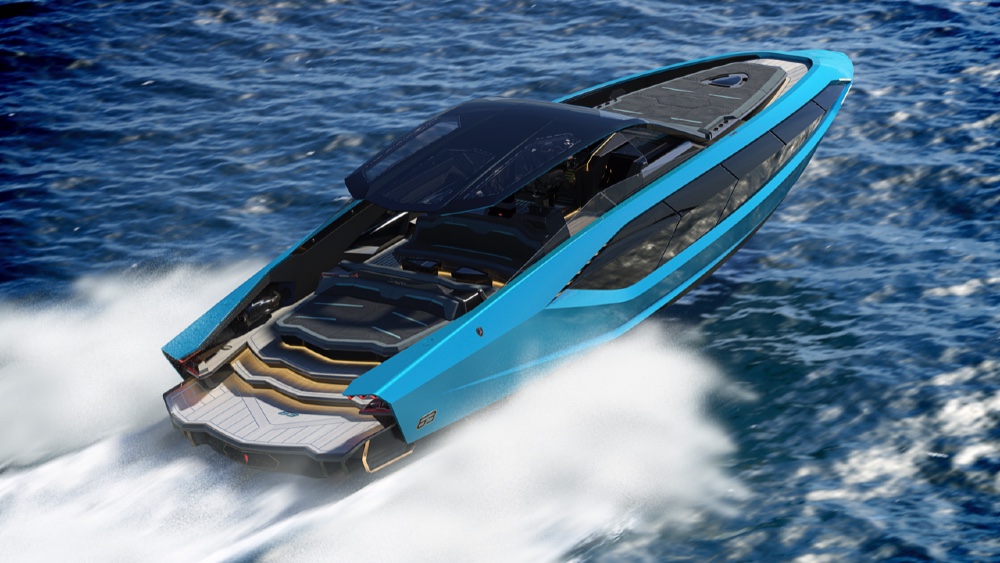 Lamborghini is lending its DNA to a new 63-foot yacht that will reach 69 mph, a blistering sea speed for a motorboat of its size. The “Tecnomar for Lamborghini 63” is a collaboration between Automobili Lamborghini and The Italian Sea Group’s Tecnomar brand.

The companies said today that the first of the limited-edition series will launch early next year. The name and length of the yacht comes from 1963, the year Lamborghini was founded.

“If I had to imagine a Lamborghini on water, this would be my vision,” said Stefano Domenicali, chairman and CEO of Automobili Lamborghini, in a statement.

The 63-foot yacht was styled after the Sián FKP 37 supercar, though the designers used other influences from classic Lamborghinis of the ’60s and ’70s. Copyright Lamborghini

The 63’s design was inspired by the Lamborghini Sián FKP 37—its hybrid supercar that was the first to use supercapacitor technologies—along with classic Lambos of previous decades. The sportscar and yacht manufacturer collaborated closely on every facet of the design, focusing on the yacht’s speed and lightweight components, including the carbon-fibre exterior. The yacht weighs just 24 tonnes.

It was a challenge because reaching high speeds on roads and the high seas require very different engineering skills, especially when retaining the Lamborghini design. Yet, both sides believe the collaboration has been successful. “This motoryacht will become as futuristic an icon as the car she is inspired by,” said Giovanni Costantino, CEO of the Italian Sea Group.

The bow lights pay homage not only to the Sián FKP 37, but also to the Lamborghini concept car Terzo Millennio, which are both distinctive for their Y-shaped front lights. The lines also include references to the Lamborghini Miura and the Countach of the ’60s and ’70s, while the hardtop is inspired by Lamborghini roadsters.

Lamborghini details are everywhere, even in places they don’t need to be—like the seating and helm console. Italian Sea Group

The 63 will be powered by twin 2000-hp MAN V12 diesels, which provides the 69 mph top end, making her the fastest of the Tecnomar fleet.

Owners of the limited edition 63—there will, of course, be only 63 built—can choose the same colors and materials that car owners opt from from Lamborghini’s Ad Personam programme. The interior will be offered in two different layouts.

The designers were keen to reinterpret the helm in a nautical style, but with the look of a sportscar. As in Lamborghini’s supercars, the helm will be finished in carbon fibre, with Lamborghini’s Carbon Skin in the seats and on the dash. The steering wheel is also styled the same as a Lamborghini. The engines even have the same start/stop button.

Check out the yacht’s details and different colours below.