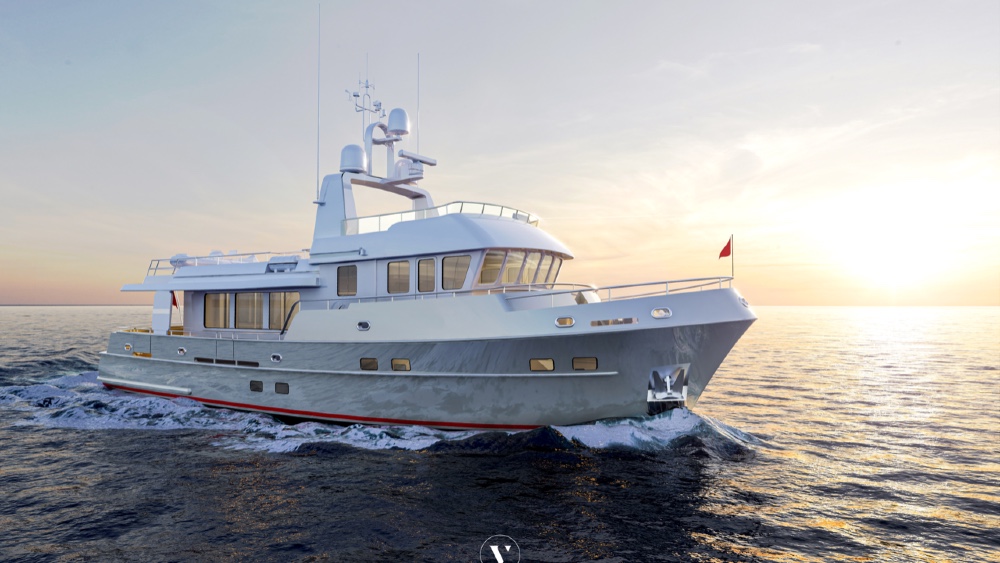 Let sleeping dogs lie. Those who love that phrase have clearly not encountered a Doggersbank. More than 700 models of the classic, 1970s Vripack design have been built to date, but none in the past 15 years. Now, with a Doggersbank 66 Offshore under construction, the rugged sea explorer is awake once more.

First imagined by the Dutch design studio’s founder Dick Boon, Doggersbank has a reputation for being a durable, well-engineered, and solid platform capable of performing in any sea condition.

Aptly named after a large and “uncomfortable” sandbank in a shallow area of the North Sea, the Doggersbank is described by Vripack co-creative director Bart Bouwhuis as “the Leatherman of Swiss army knives” because of its utilitarian, rather than pretty, nature.

The hardy design of the Doggersbank 66 Offshore has lasted for nearly 50 years on some older models. All Images Courtesy of Vripack

The Doggersbank’s rugged exterior convinced a Dutch family, who have owned several commercial shipping boats, to instruct a family shipyard nearby to start building their 66-footer.

“The family are hands-on fanatical boaters used to sailing in Northern Europe, mainly the North Sea, Baltic and Scandinavia,” Bouwhuis told Robb Report. “After a few years of  autonomous sailing, they made the decision to step into a boat without a mast, but want to keep it family operated. That’s why the layout has no provisions for crew—not even a captain. And in all honesty, on a 66-footer, that’s what you should do. It’s fun!”

Past Doggersbanks have ranged from 33 to 100 feet in length. Last year, the 95-foot Geyle Force made a name for itself for being the smallest private Marshall Island-flagged boat to ever venture to the Southern Peninsula.

While approaching an iceberg is not recommended, the 95-ft. “Geyle Force” was one of the first Doggersbanks to visit the Antarctic. Vripack

Bouwhuis describes the Doggersbank 66 Offshore as being “a seaworthy explorer without the fu-fu.” In other words, it’s fuss-free and relies on its naval architecture and characteristic high bow to handle big seas.

“Very few changes have been made to the original design,” Bouwhuis says. “We’ve known the family for around 15 years and have designed many commercial boats for them. So, when we learned that they’d stopped sailing, we knew their Doggersbank was coming. They were already aware of the model, so they signed a contract with the shipyard in a couple of days, and then went straight into build.”

The Doggersbank fleet are now positioned around the world, and many continue to thrive despite being built decades ago. “What you see is what you get,” Bouwhuis said about the design. “It’s ready to perform in any condition.”

The 66 is scheduled to be delivered late next year.