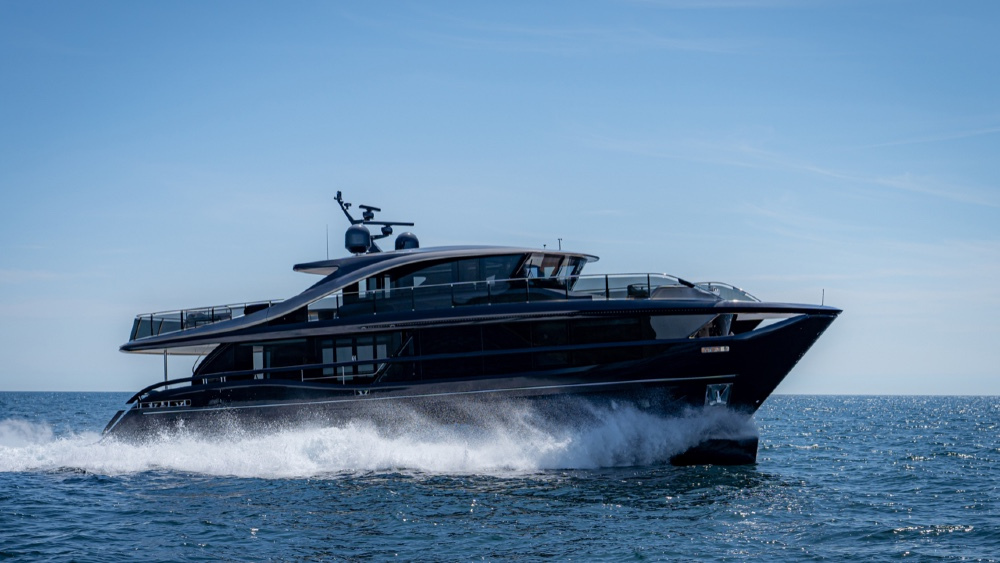 Princess Yachts officially debuted its new X95 Monday on Facebook Live, a platform that has become a sign of these times—virtual launches, instead of real boats at boat shows. But the unusual design of the X-series’ flagship also signals changing times for Princess, showing a bolder, more creative period for the UK builder, which is now making new design rules instead of following them.

The X95—the “X” unofficially standing for explorer—is not only a sea change for Princess, but also for the 100-foot segment of the superyacht world. Princess’s goals for the X95 were an “open concept” and supersized flybridge, so owners would have greater freedom for layout choices, increased living space and more amenities in a smaller hull.

“We pushed the design language forward on this design,” Antony Sheriff, Princess chairman, said during a press conference last Thursday. “This was never going to be a traditional boat, but we asked ourselves how we could push it forward as a new design and still have it recognisable as a Princess.”

The Princess team, working with its longtime naval architect Bernard Olesinski and Italian design house Pininfarina, spent months hammering out the initial concept. “We had everyone in the room during design reviews and that collaboration really stretched where we wanted to take the boat,” says Sheriff. “We also went into a level of detail that is standard in the auto industry, but not in the boating world.”

The details, both large and small, included making sure that exterior surfaces like the arch on the flybridge reflected light normally in all conditions. “Details like that make a big difference,” says Sheriff. “If the surface reflected light oddly at sundown, for instance, it would make that part of the yacht look off.”

There were even larger modifications to the interior. The designers decided to remove an internal helm and instead made the helm on the top deck the primary station for driving the yacht.

The sky lounge on the yacht offers excellent visibility, not only through the side windows, but also in the front and rear. Having this much space on the upper deck is a highly unusual design for a yacht this size.

“The midway helm works for some, but it positions quite a large cockpit on the main deck, often leaving a small technical space beneath the helm position,” Andy Lawrence, Princess’s director of design told Robb Report. “By deleting the lower helm, owners can now use the main deck without interruption.”

In other words, instead of having a steering station in the middle of the room, owners can turn the long, unbroken space into a master suite, library, or cinema, or anything else that they fancy. Lawrence says this “open concept” provides 80-foot-long views from the rear of the boat all the way through the salon, up to the bow. That sense of openness is the same as an urban loft, where internal walls do not distort the view. Combine the sweeping space with an open-plan galley, Lawrence says, and the design becomes very popular with American yachtsmen.

“They like their open kitchen arrangements and to have the crew involved with the daily workings of the boat,” he says.

Room With a View: By taking out the helm station on the second deck, Princess designers could add a full-beam master suite with no structural impediments. Princess Yachts

Beyond open space, supersizing interior volume was also a major design goal. The 670-foot interior is actually a 40 percent increase on comparable sized yachts. It’s even 200 square feet larger than the interior on Princess’ 114-foot model.

“Because you don’t have that helm hanging through the middle, we can play with different configurations and look at different usages,” says Lawrence.

Other big changes on the X95 include the sky lounge, which has been relocated to the top deck to optimise views. The beach club area also has a lounge area and galley which can either be used as guest space or extra crew cabin. Customised steps that extend backwards were added to the stern to turn the area into a transformer platform.

The designers paid very close attention to details on this yacht, including how light reflected off exterior surfaces at different times of the day.

“It’s the first time we’ve used this kind of mechanism and it was made fully bespoke by Opacmare for us,” says Lawrence. “It’s about five feet wider than the biggest one they make, so it was quite a piece of engineering—and probably took about as long to develop as the rest of the boat.”

Increased efficiencies were designed into the X95. Deck space was increased by 10 percent, thanks to the “super flybridge,” which, unlike conventional flybridge models, is one continuous level. The new hull design offers 15 percent increased efficiency while running.

The unusual configuration includes a large foredeck on the top level.

Naval architect Olesinski’s wave-piercing bow “artificially extends the waterline length of the boat,” says Lawrence. “Combined with the shape of the hull, that’s what gives you the efficiency.”

The yacht will have a range of 2,000 miles at a 10-knot cruising speed, but it also reaches a highly respectable top end of 24 knots.

The first X95 has been delivered and the owners are enjoying a shakedown cruise in the Med. Annie Reed of the Princess Design Studio said so much open interior spaces allows owners many ways to configure the yacht. Hull number one has book shelves on the main deck so the owner can keep his prized library on board. By contrast, the second boat will have floor-to-ceiling windows to allow in more light. “It’s those kinds of requests that the Princess Design Studio works well with,” she said. “It’s part of our ability to understand different international lifestyles.”

The open galley area allows clear line of sight from the rear cockpit up to the forward section of the main deck. Princess Yachts

Sheriff, who came to Princess after running automobile manufacturer McLaren, says an X80 will be next in its X series. “This product stands on its own feet,” he said “It’s a really compelling recipe—significantly more interior volume and extended range. This product is a very different option for our customers.”

“It’s always good to have someone coming from outside the industry with fresh eyes to just look at what you’re doing and ask questions,” says Lawrence, regarding Sheriff. “Why do you do it like that? Why do people use the flybridge in that manner? I think it was a result of those questions that pushed us to come up with this new concept.”

With ten X95 models sold to different owners around the world, it would seem that the theory is working.

Check out other images that reveal the details of the X95’s design.

All Images Courtesy of Princess Yachts