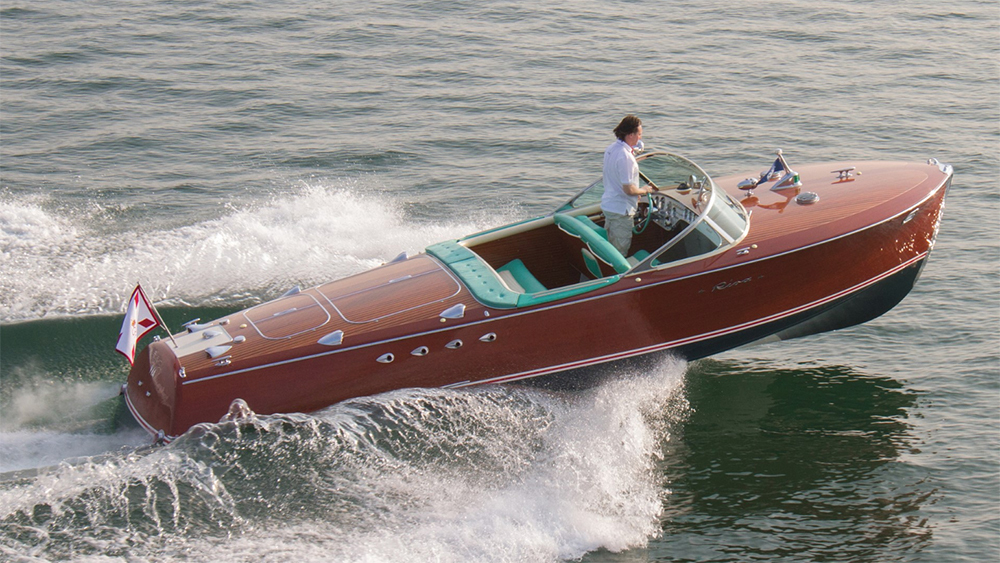 Picture the scene: it’s Monte Carlo circa 1958, and the young Prince Rainier III of Monaco is zipping across the harbour in his brand-new Riva Tritone sports boat. Alongside him is Hollywood movie star and the new Princess of Monaco, Grace Kelly, Hermès scarf fluttering in the breeze.

Now fast-forward to Villa Erba on Italy’s Lake Como, just up the road from George Clooney‘s lake-front villa. On May 25 the iconic Riva yacht is set to go under the auctioneer’s hammer at RM Sotheby’s Villa Erba auction.

Back in 1958, this classic 26-foot, mirror-varnished mahogany speedster was gifted to Rainier by a close relative who had ordered two Tritone runabouts from Carlo Riva. Hull No. 62 was christened Via and equipped with a pair of throaty Michigan-built Chris-Craft 5.5-litre straight-six engines.

The Rainiers loved the boat; it was a regular sight in and around Monaco’s Port Hercules and along the Côte d’Azur. It even became the official flagship of the prince’s fleet of yachts—flying both the red-and-white flag of Monaco and his personal pennant.

While Rainier would add other Rivas to his collection, including a smaller 19-foot Riva Junior for water-skiing with Princess Grace and their young family, the Tritone remained a firm favorite.

After acquiring the royal Tritone in the early 2000s, the second owner commissioned a complete—and very pricey—bow-to-stern restoration with world-renowned Dutch Riva specialist Riva-World, bringing it back to its original condition. When it was auctioned at RM Sotheby’s Monaco sale in May 2014, it went for 413,200 Euros, or £246,597 at the time.

According to RM Sotheby’s listing, the current owner has kept the boat in Monaco since 2014, where it has been pampered by Riva dealer Monaco Boat Service at its unique harbour-front workshops set in tunnels beneath the royal palace.

While the auctioneer hasn’t given an estimate of the projected value of this cherished piece of Monegasque history, we reckon it could go for more than £550,000. Who knows? Maybe George Clooney will wave his paddle.

How Innovative New Superyacht Designs Are Already Changing the Industry

From a Battleship-Inspired SilverYacht to a Classic Lürssen: The 6 Best Boats at SuperYacht Miami

Superyacht or Cruise? The Ginormous 925-Foot ‘Njord’ Wants to Sell You a Luxury Condo on the High Seas