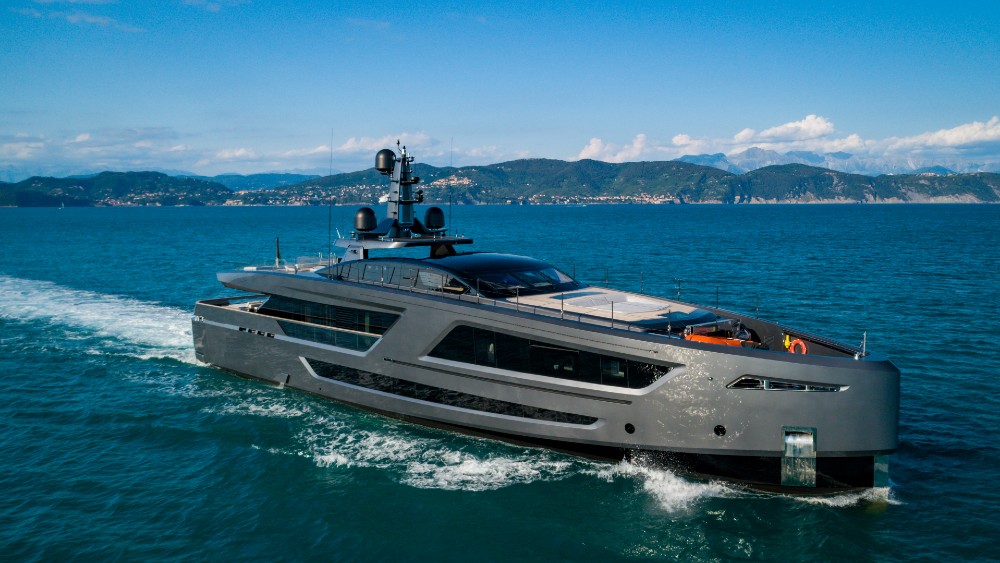 Green roofs and living walls are land-based designers’ first stops for adding foliage to an urban area. But Baglietto’s Panam is one of only a handful of yachts to adopt a biodiverse environment at sea, with a vertical wall of vegetation located in the main salon. The verdant wall, which is expected to live for years, is more than a lush, dramatic conversation piece. It serves as an informal partition between the main salon and dining area. It’s also one of many interesting features on a 131-footer that is a floating jigsaw puzzle, with a Zen interior, rocket-ship hull and flybridge designed for partying.

There are other examples of bespoke superyachts with unique designs and internal gardens. They include the 446-foot Flying Fox, which has sprouting planters and giant weeping figs. And Amels’ 251-foot Boadicea scores highly with its tropical garden on the aft end of the boat. Mondomarine’s Serenity also has verdant, living headboards on the main salon’s beds.

But because live plants can be tricky to maintain inside a vessel, most other yachts are reduced to a few bonsai trees on a window ledge or the odd potted herb near the galley.

The vertical garden (left) serves as a lush but informal dividing wall between the dining table and salon.  Courtesy Baglietto

Tricky or not, the calm ambience that green foliage brings to an interior space is something that owners are requesting more of. “They serve as architectural solutions that divide a space without closing it off; that helps to avoid narrow spaces,” says Panam designer Francesco Paszkowski. “It keeps an open-plan interior while also delivering a functional and aesthetic element.”

Paszkowski had an even larger vision for Panam’s vertical garden—to bring the outdoors into the interior. “The purpose was to enhance the welcoming vibe in the living area,” he told Robb Report. “It adds a green touch to the environment and introduces light into the space in a natural way.”

Panam’s owner desired a modern interior with a largely grey palette. In the living room, muted tones and cream furnishings stand in stark contrast to the bright pops of green flora. Large windows add natural light to the calm environment.

The flybridge is one of the yacht’s social areas, with lounges, a counterflow swimming pool for laps, and a DJ table for parties.  Courtesy Baglietto

Close contact with the sea was another specified priority. It’s reflected in the full-height, geometrically-cut windows that create light-filled spaces, the transparent surface of the gunwale on the main deck and flybridge, and the full-beam beach club. Its three sides drop down to create three floating over-water terraces delivering sea breeze and a calm vibe. They also have a dramatic, almost startling look on Panam’s stern because the hull is so buttoned down. Behind the engine room sits the garage that houses a 17-foot tender. It can be partially flooded for easy launch and retrieval.

In dramatic counterpoint to the quiet interior is a 700-square-foot flybridge—Paszkowski’s favourite of all the yacht’s al fresco areas. It has an enormous curving hardtop, lounges and sofas as well as custom-made swimming pool with a counterflow system that allows lap-swimming. The bar has a sliding top over the counter. When open, it provides a shelf for guests who are enjoying drinks at the bar and reveals a working area for the cocktail-making crew.

While the interior is all Zen, the DJ table on the this level is about partying into the night. This flybridge is one of the most imaginative on the water.

Another noteworthy feature is the boat’s speed. it has a sleek, wedge-shaped profile and vertical bow, or what Baglietto calls a “powerful character.” Typically vertical bows are not fast boats, but Panam comes up on plane, revealing a very sharp forefoot and blasts up to 31 knots, thanks to the lightweight aluminium alloy hull and superstructure, three MTU V16 2000 engines and three very powerful KaMeWa waterjets.

The speed is yet another seemingly contradictory part of a fascinating design that equals more than the sum of its parts. The old saying that “blue and green should never be seen” together obviously didn’t have Panam in mind.

Here are some of Panam’s other angles.