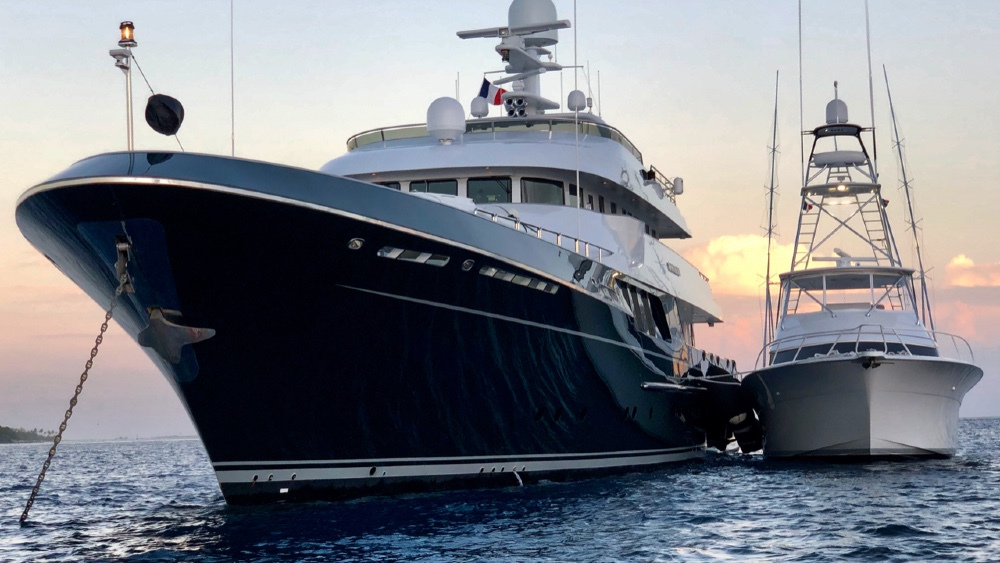 The Dynamic Duo has nothing on Dorothea III, the 147-foot expedition yacht that has taken mothershipping to a new level, and her 63-foot sportfishing sidekick, Post One. Since Dorothea III‘s 2007 build at Cheoy Lee shipyard, the Ron Holland-designed yacht has traveled to more than 75 countries, logging over 140,000 nautical miles. But it’s her two-year, long-distance cruising relationship with Post One that has stretched the realm of possibilities in the superyacht world.

“We’ve always had an aggressive cruising programme, but over the years it ratcheted up from remote cruising to towing tenders for sportfishing excursions,” Capt. John Crupi told Robb Report. “Then the tenders got bigger, the cruising areas got wider, and over the last two years, we’ve traveled in tandem with our big sportfishing tender, Post One, covering more than 40,000 miles across three separate oceans.”

That kind of tandem travel is unheard of in the superyacht world. On most superyachts, tenders are typically 18- to 32-ft. motorboats stored inside the hull. Dorothea III’s owners, by contrast, are travelling with a 63-ft. sportfishing battlewagon, heading into the world’s most remote waters for fishing expeditions that other anglers can only dream about. 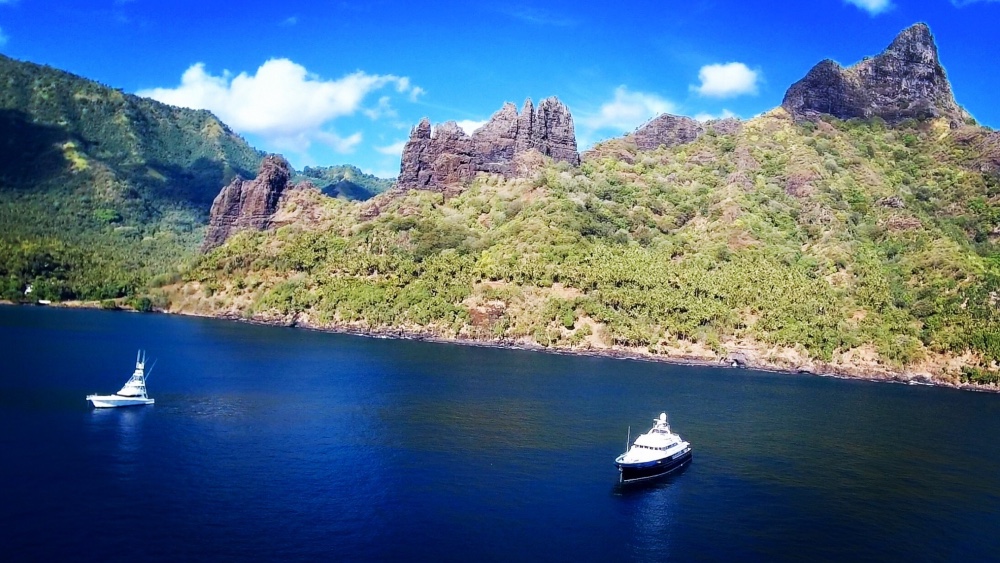 The two yachts have traveled more than 40,000 miles together over the last two years, crossing three oceans. Camper & Nicholsons

Post One, a two-year-old, 63-foot Hatteras GT, is the owner’s fifth boat built by the North Carolina shipyard. “We had built one just prior to that, a 45 Hatteras Express,” says Crupi, who has been with the owners since late 2000. “We did some crazy stuff with that boat with the towing configuration by developing a remote-control program that allowed us to control the 45 Hatteras from Dorothea III.”

Crupi says pulling a full-sized sportfishing yacht behind a mothership posed challenges, but the benefits far outweighed the headaches. “When you get to where you’re going—some sportfishing mecca that is off the grid—you’ve got an awesome fishing boat,” says Crupi. “That’s something nobody else in the sportfishing world has ever done—just because they can’t get their boats there. But we could.”

While Brazil proved to have the best blue marlin, Crupi recalls many other fertile waters with unbelievable fishing. 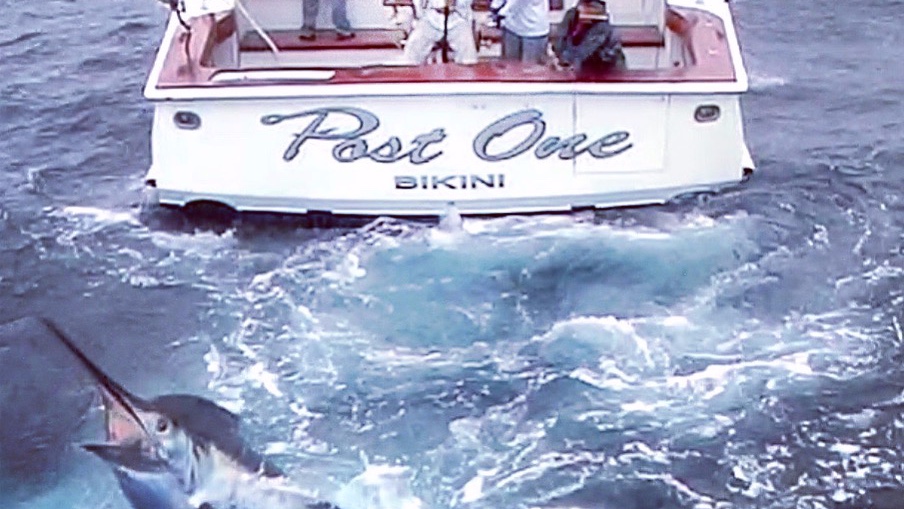 Post One seeing billfish action off the coast of Brazil. Camper & Nicholsons

After ten years of towing, Dorothea III’s owners decided to build a tender that could cross oceans on its own engines. But pushing Post One for 4,000 miles of transatlantic cruising, when it’s designed to go 200 miles, was not an easy task. The Hatteras could run for just two days at 10 knots, before it needed to be refueled.

Crupi says the relatively short range, at least compared to the superyacht, were mitigated in part by “beefing up” Post One’s systems, including its pumps, motors, fuel-transfer systems, fuel bladders and “over the top” electronics. Refueling Post One from the mothership while under way was also a risky unknown, adds the captain, but both crews have perfected it, even in mid-ocean.

Dorothea III was critical to the success of the cruising adventure. “She was designed with optimisation in mind,” says Crupi. “The fact that she has a single-engine configuration, with controllable pitch on the propeller, let us go places that a typical twin-engine yacht couldn’t have accessed. A twin-engine superyacht certainly wouldn’t have the range or fuel capacity to run two boats simultaneously across oceans.” 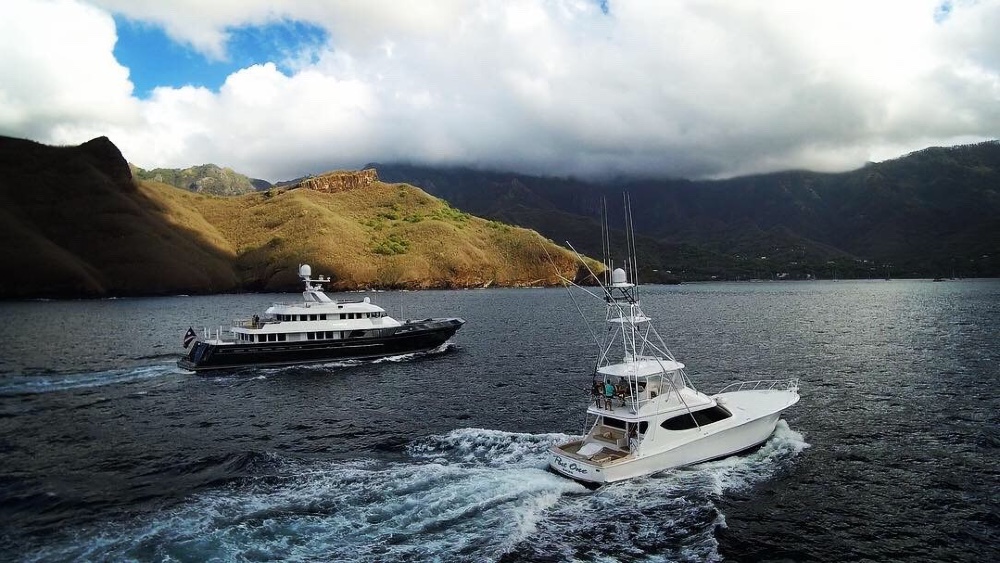 The mothership and tender travelled thousands of miles to reach the Marquesas in French Polynesia. Camper & Nicholsons

Dorothea III is listed for sale with Camper & Nicholsons for around £9,362,000. Her cruising partner, Post One, is also available for sale as a package, or separately. Check out other images of Dorothea III below. 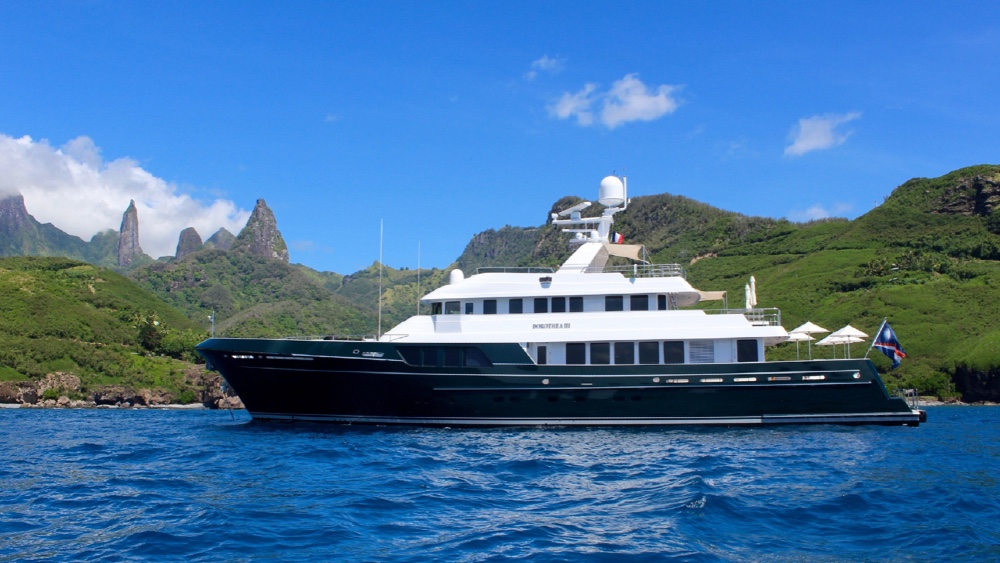 All Images Courtesy of Camper & Nicholsons 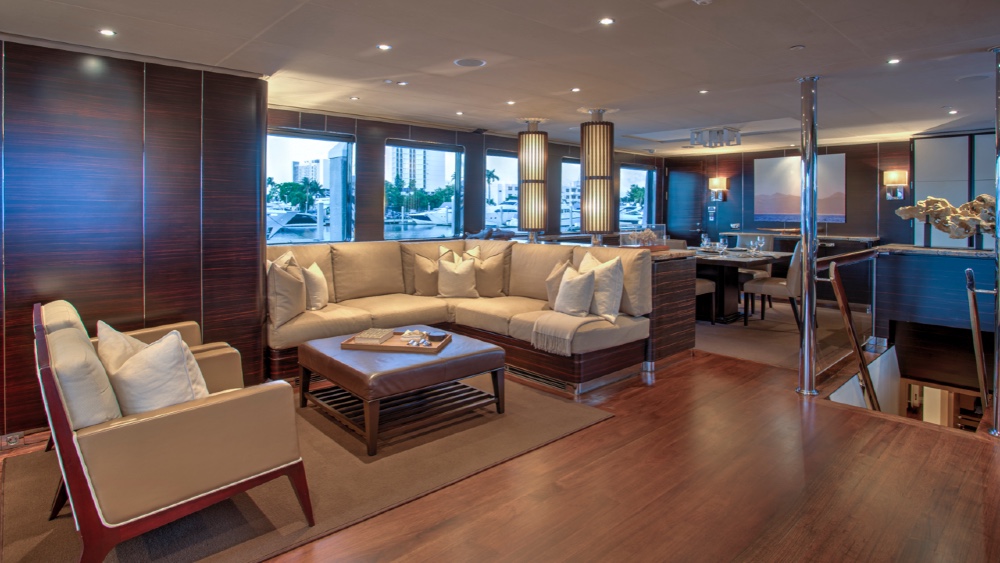 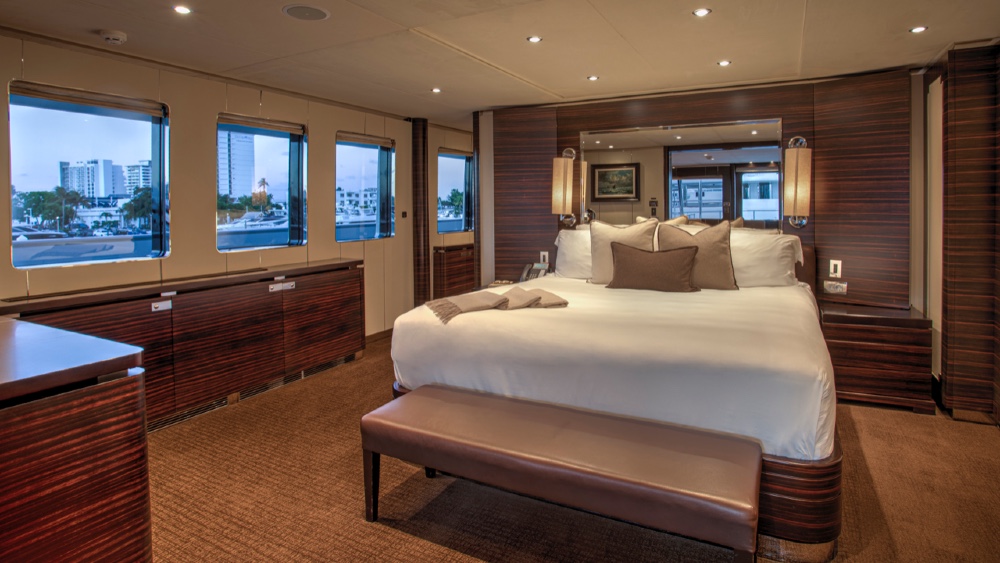 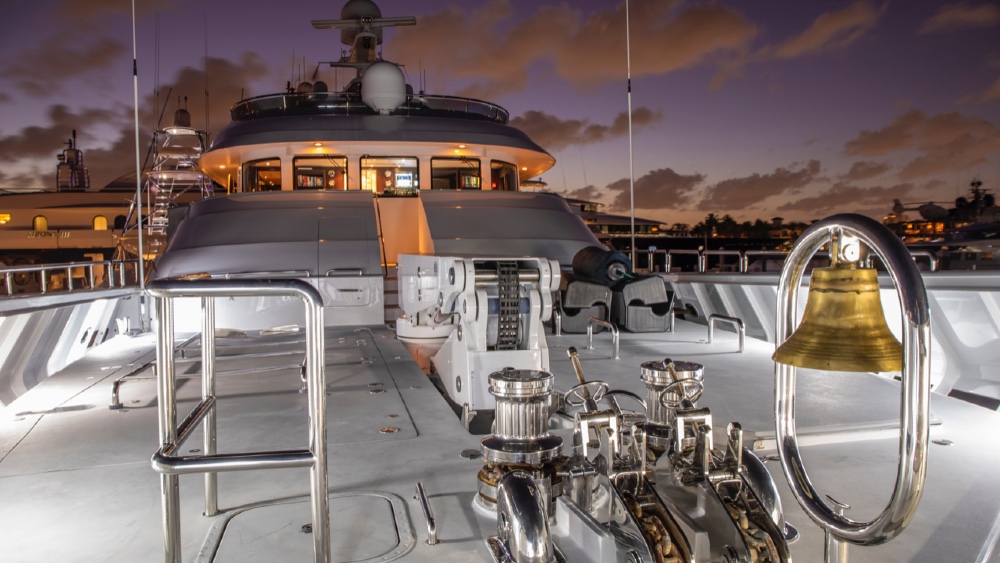 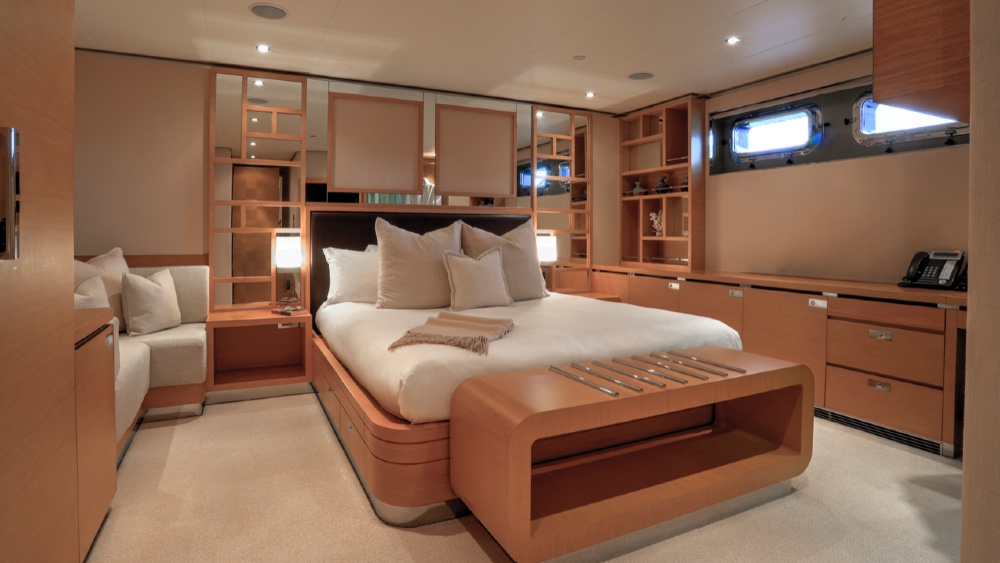 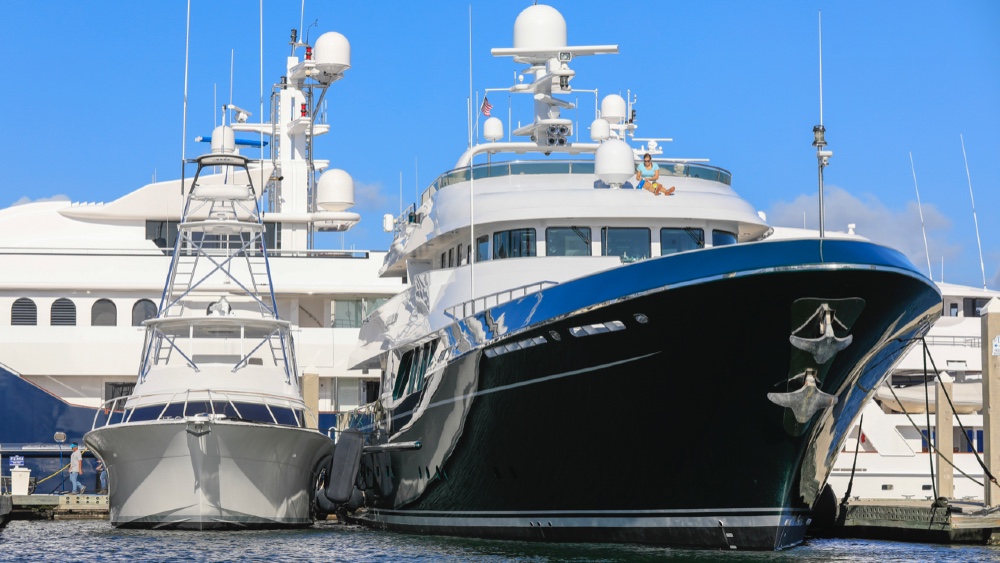