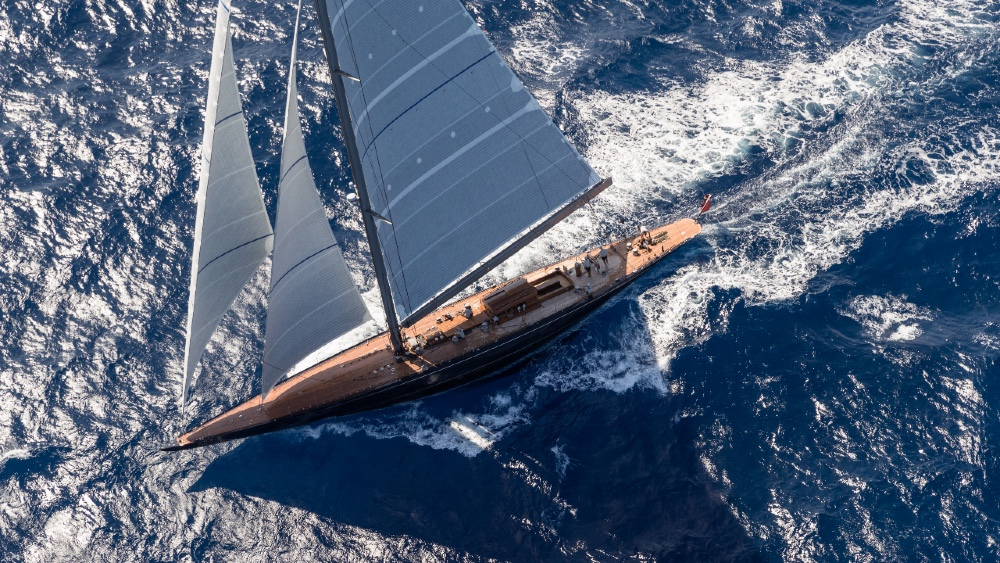 Have you ever dreamt of racing on a magnificent sailing superyacht that looks like a classic vessel from the 1920s and 1930s? During that golden era of sailing, J Class titans like Shamrock V, Yankee, Ranger, and Endeavour II became royalty of the sailing world. Those massive, powerful vessels, with their sleek wooden hulls and billowing sails, along with dozens of crew hanging over the gunwales, became icons for the world’s wealthiest families.

A century later, Rainbow exudes the same sense of grace and power, but is a thoroughly modern recreation of its 1930s namesake. Launched in 2012 by Holland Jachtbouw, she faintly resembles the 1934 J Class America’s Cup winner. Because she mixes classic design with modern technology, this new-generation Rainbow packs more pedigree into her 140-foot aluminum hull than most other modern sailing yachts combined.

Built to J Class Association maximum performance rules, her naval architecture was developed by Dykstra from the original Rainbow hull. The added bonus of being a modern sailing superyacht is a stunning interior by Devos de Vries Design. 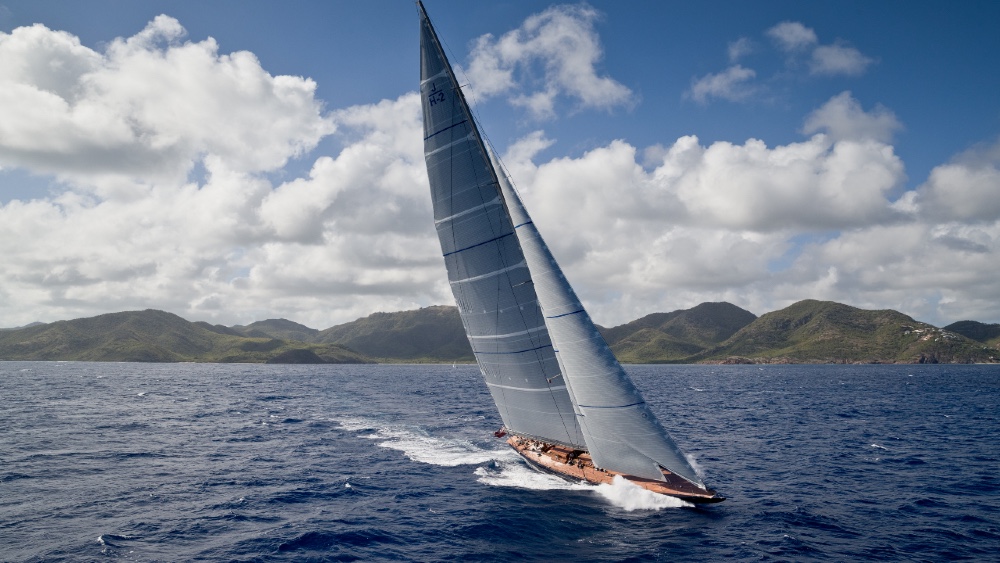 The 140-foot yacht is modeled after the original J Class Rainbow from the 1930s, but was launched in 2012 with all the modern superyacht amenities. YPI

“The J Class rules state that you have to use an original design that is already in circulation,” Matt Sweetman, Rainbow’s captain told Robb Report. “And you’re not allowed to have two of the same boat. There are only around 25 designs left in the world, but probably only seven are any good. That makes Rainbow a pretty exclusive racing yacht.”

Rainbow‘s current owner bought her in 2015 after seeing Rainbow in the Caribbean. The man was thunderstruck by her immense size and grace. “It was a pure aesthetics thing for him,” Sweetman says.

The new owner put the yacht through a series of engineering upgrades, including modifications to the interior. 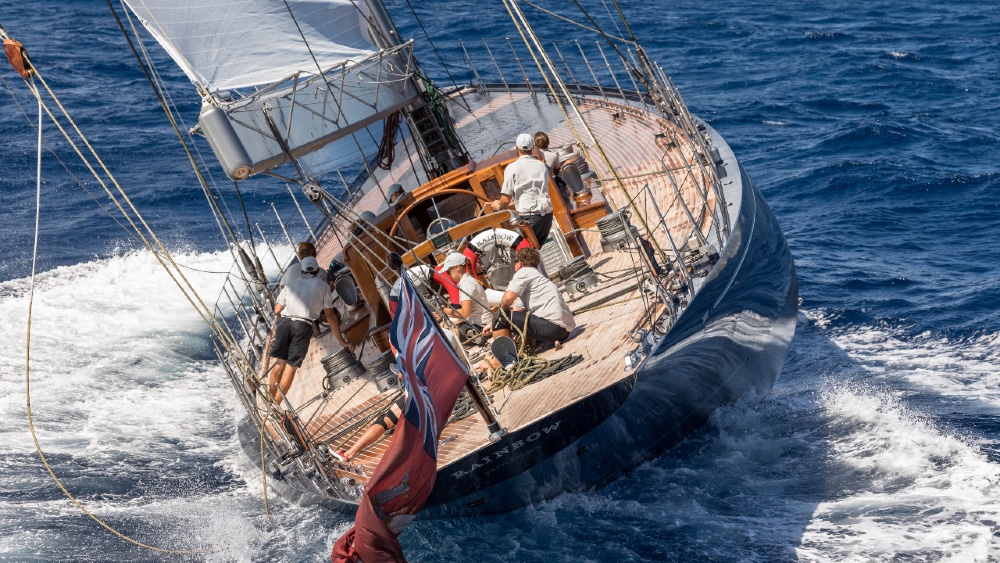 The original Rainbow would have had dozens of crew members to work the sails manually. On the modern Rainbow, many functions are automated, though the captain says all seven crew do their regular jobs on board while assisting when the sails are up. “To do any maneuver, we need all hands,” he says. YPI

For the past five years, Rainbow has kept off the racing circuit but participates at many sailing regattas, including Loro Piana in Sardinia and Les Voiles de Saint Tropez. She’s also a successful charter yacht, so many sailing aficionados enjoy her in the Mediterranean and Caribbean.

Sweetman says the thrill of sailing a J Class is unrivalled. “This is the first boat I’ve been on where I have to think about sailing rather than pushing buttons for automatic operation,” he says. “Our foresails are manually operated, so the loads are quite big, and you can feel the boat tremble as you pull the sheets on and let them out. The waves lap down the decks. It heightens your senses.”

When the yacht is sailing in 18 to 25 knots of wind, it’s like being aboard the original Rainbow, complete with sudden acceleration, the extreme tilt of the yacht and wind literally whipping through the sails. “It’s exhilarating,” says Sweetman. “There are big noises, and your guests will definitely get wet. It’s a brutal, interesting day’s sailing.” 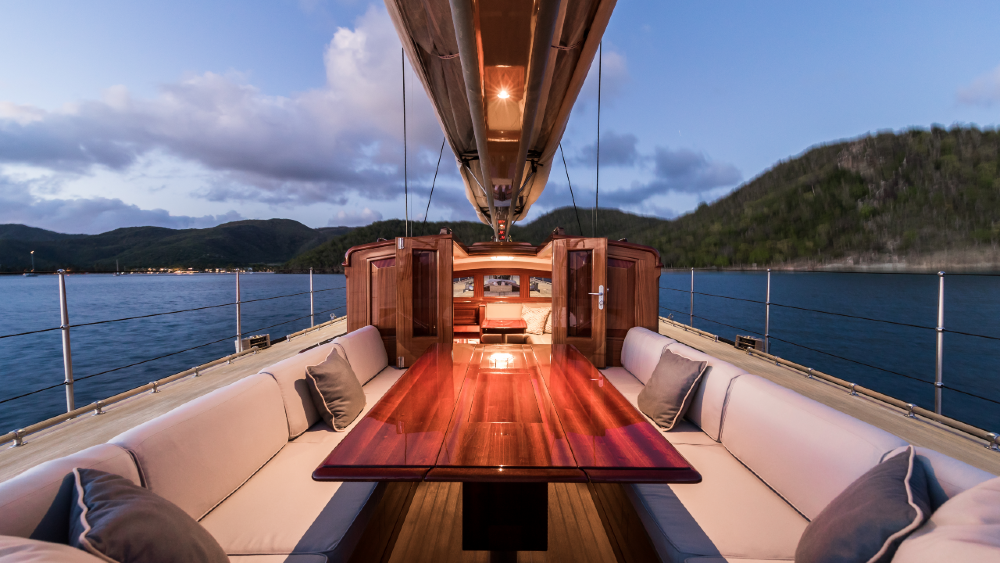 One of the main differences between the original Rainbow and this modern version is the focus on comfort and cruising as opposed to just racing. YPI

The golden age of J Class yachts peaked in the 1930s. Owning one is a bit like joining the world’s most exclusive owner’s club—very small and very elite. The J Class renaissance began when Newport real estate entrepreneur Elizabeth Meyer completed a £7.75 million refit of Endeavour in 1989. “That renewed everyone’s love for the Class, and then other people started building,” says Sweetman.

Velsheda and Shamrock V complete the trio of original boats still sailing, while the first modern replica, Ranger, was built in 2004. “The new J Class owners soon realised that they didn’t have to just race, but had a nice platform for a beautiful cruising yacht with an interior,” says Sweetman. “Designers André Hoek and Gerald Dykstra were made the leading hands who, alongside the owners, came up with a way of modernising the rule so that these boats could be used for both racing and cruising.”

The new rules also ensured that the new generation of J-Class yachts didn’t humiliate the older class during races. “Everyone had to be competitive,” says Sweetman. “Otherwise, there was no point in rebuilding a Class.” 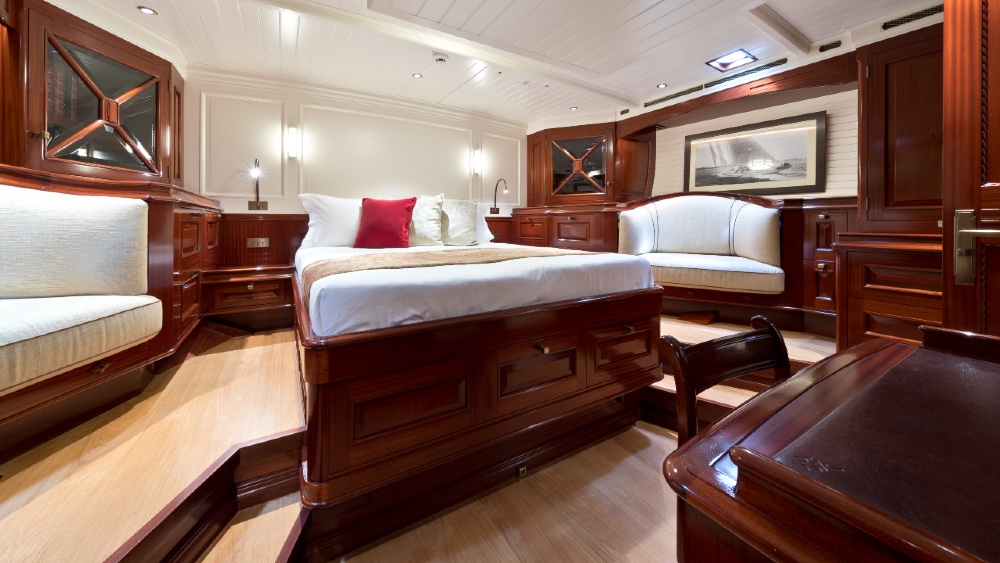 Despite its modern interior, the owner decided to keep a very classic nautical look with mahogany decor and white walls. YPI

Today, J Class superyachts have standard amenities that would’ve been science fiction in the 1920s—compact generators, air conditioning and hydraulics to run state-of-the-art winches. Each boat has to have an owner’s cabin, as well as guest cabins, and most, including Rainbow, are Lloyd’s classified. “We have everything any modern superyacht would have,” says Sweetman.

Even with a hybrid diesel/electric drive, carbon rigging, an aluminium hull and electrohydraulics, it still takes all seven crew to operate Rainbow. “The chef sails, the stewardess sails, the engineers sail,” says Sweetman. “To do any maneuver we need all hands.” 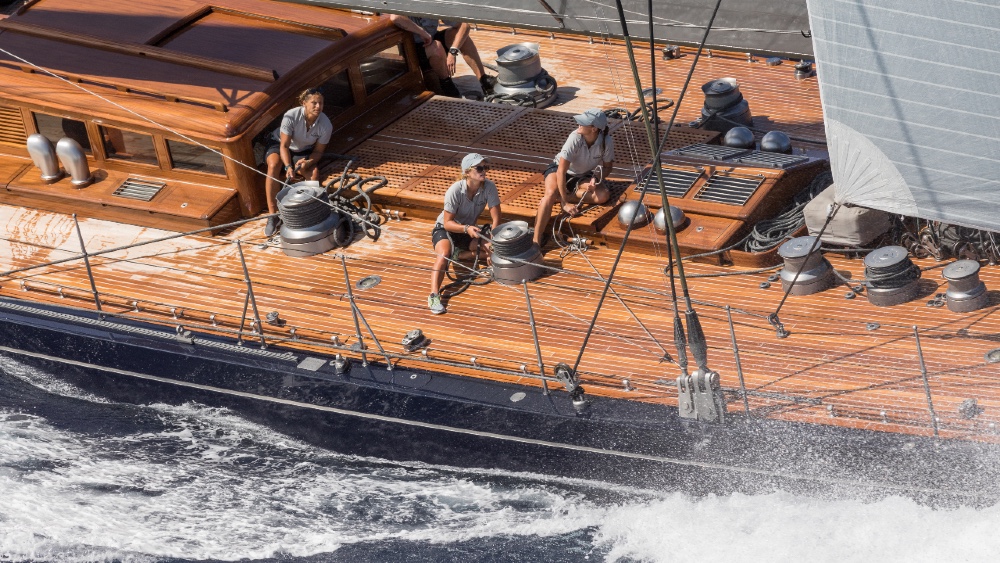 Rainbow delivers all the sensations and thrills of sailing aboard the original 1930s yacht. YPI

The Caribbean provides ideal sailing, with its sunshine, trade-wind conditions and good sea states. “Because Rainbow is designed to go racing, the loads we’re using when cruising are relatively small for what it’s used to, so we can really heel her over and get her really wet and make it good fun,” Sweetman says. “She’s an amazing boat. There’s never a dull day.”

Rainbow is currently for sale with Yachting Partners International for approximately £7.3 million. Check out more images below. 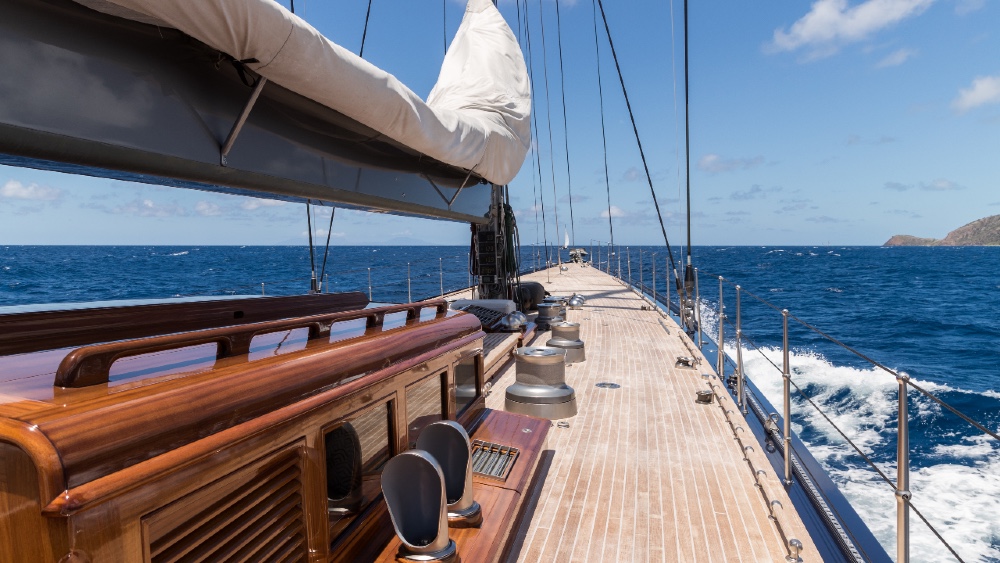 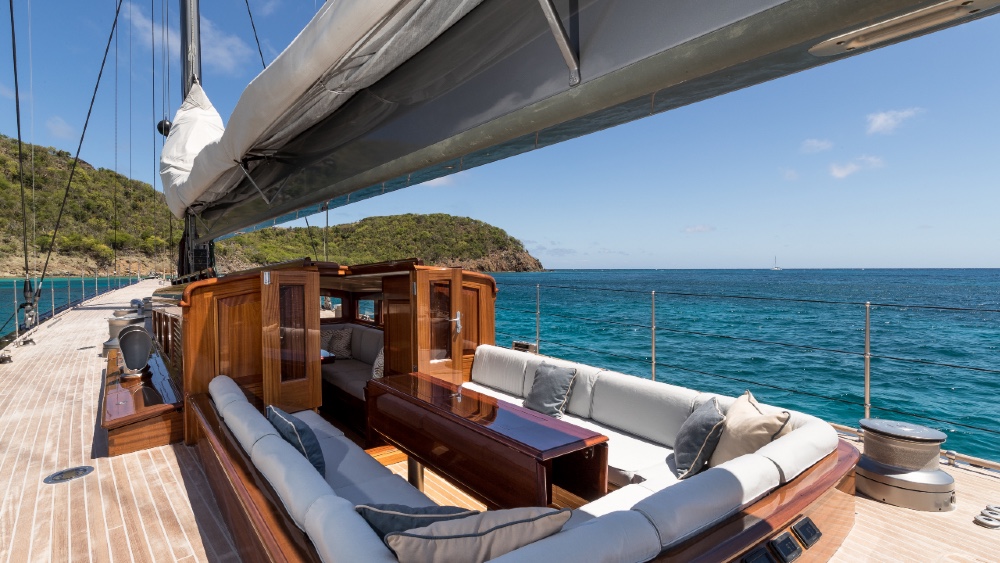 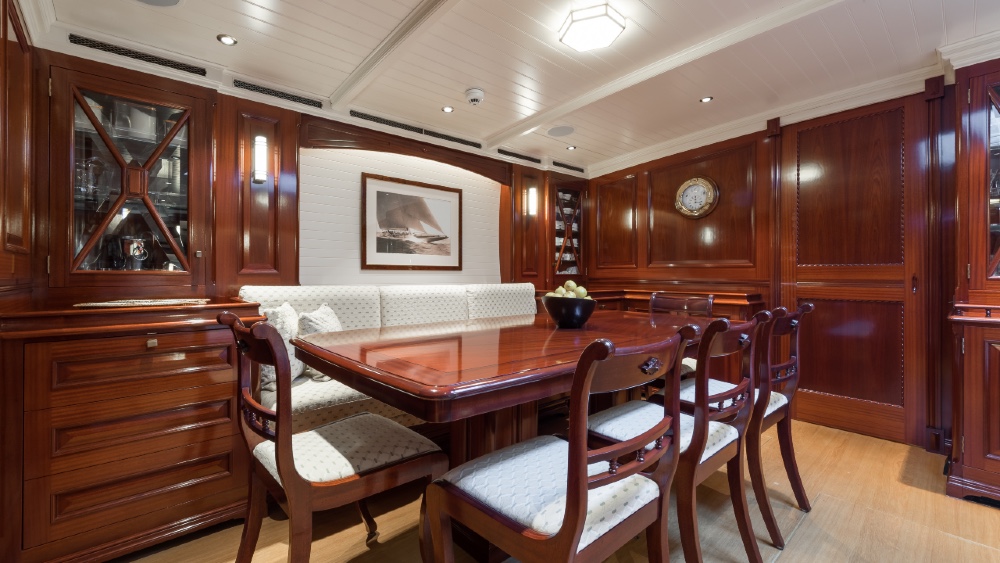 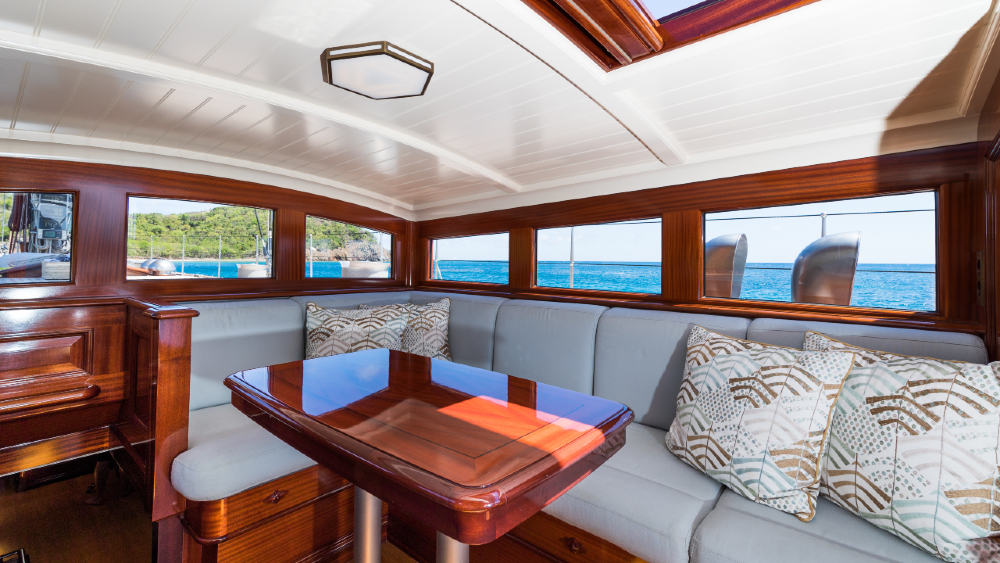