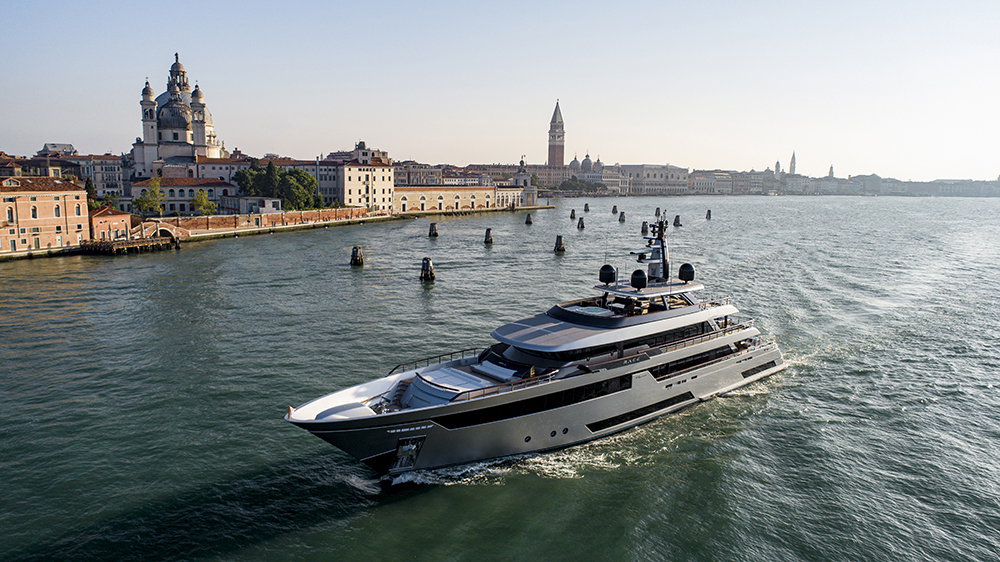 Just before sunset on a steamy June evening in Venice, Italy, men in black tie hop off sleek wooden water taxis and limo tenders in front of the historic Arsenale, while female passengers, dressed in scrappy, shimmery finery, step cautiously so as not to catch their pencil-thin heels in the gaps of the planked docks. Sipping Champagne they make their way down a candlelit blue carpet along the water’s edge into the canopied party.

The ambience and mood of the festivities befit a royal marriage. But the entrance that the assembled guests await with increasing anticipation is not that of a bride in a flowing white gown. Rather, it’s a marine vessel: Riva’s new flagship yacht, the Riva 50M, or as Alberto Galassi, CEO of Italian parent company Ferretti Group, later calls it, “Riva Cinquanta Metri”.

The crowd of yacht owners and the like will have to wait. First comes dinner, prepared by Galassi’s childhood friend— and Michelin three-star chef—Massimo Bottura, who brought along the entire staff of his Osteria Francescana in Modena to do the cooking.

After dessert the orchestra kicks in, spotlights sweep the horizon, and fireworks light up the starry sky. Finally it’s here: The 164-foot Race, Riva’s largest vessel ever, grandly cruises into the water space in front of the venerable Venetian shipyard. The captain gracefully turns the superyacht this way and that, as if Race were preening down a catwalk, giving the crowd a look at each side of the yacht. Although much, much bigger than the Aquaramas and Floridas of old, the multi-deck superyacht is still clearly recognisable as a Riva thanks to its head-turning silver hull, glossy mahogany handrails and teak flooring that flag this boat as Aquarama kin.

“You can tell a Ferrari from other sports cars. You can tell a Riva from other boats. That’s the mission,” Galassi explains over lunch at the Hotel Danieli the next day, his buoyant and humourous mood reflecting the success of the prior night’s gala.

To be sure, for many yachting enthusiasts, the name “Riva” conjures up beautiful and speedy wooden boats helmed by the likes of Brigitte Bardot, George Clooney and Pierce Brosnan, both on-screen and off. Founded in 1842 on the shore of Italy’s Lake Iseo by Pietro Riva, the company became known in the 1950s for the runabouts that sped along Italian lakes and the Mediterranean: elegant, well-crafted polished-wood pleasure boats. Riva started with the Ariston, then revealed the Tritone (the first two-engine yacht), the Sebino (the company’s first series) and, soon after, the Florida, made famous by Bardot (hers was a 1959 rendition). In 1969, Riva started building in fibreglass, which it still uses today, although it continued to produce runabouts in wood until 1996, when the last Aquarama Special was completed.

Commissioned by the serial-yacht-owning son of a man who started a very well-known automotive company, Race is the first example of what Galassi says will be not only a new line of superyachts but also a new era of building for Riva. Designed inside and out by Officina Italiana Design—the studio founded by longtime Riva designer Mauro Micheli and Sergio Beretta— along with Ferretti Group’s engineering team and the Ferretti Group Product Strategic Committee, the yacht has a profile that’s simple and clean, with a long foredeck, central superstructure and aggressive prow, all packaged in a metallic-paint hull that Galassi describes as the antithesis of a “white whale”.

It is also the manifestation of a wish that creative force Carlo Riva shared just before he died in 2017 at age 95. “This is the dream of Carlo Riva coming true,” Galassi says. “He told me one day, ‘Make a stainless-steel displacement Riva like we did in the ’60s”, referring to the Caravelle and Atlantic motor-yacht series—steel boats, conceived by Carlo, that were considered the superyachts of that era.

Race, hull No. 1 of the new series, is constructed of steel and a light aluminium alloy and features a main-deck master suite with a private lounge (for the owner to watch his beloved auto racing), outfitted with a comfy white-leather U-shape sofa, a flat-screen TV and Ferrari memorabilia. This uncommon layout is made possible by the lower-deck placement of the kitchen, which is typically just aft of the master on the main deck. (A dumbwaiter connects all decks for easier food and beverage service.)

The master bedroom is decorated in grays and creams, a masculine yet sophisticated nod to the owner’s request for quiet tones. (Race’s owner selected Micheli for the interiors; subsequent Riva 50M buyers may bring aboard decorators of their own choosing.) A drop-down terrace provides an over-the-water relaxation space, incredible views and sea breezes—plus direct access to the water for those brave enough to dive the distance.

Four more staterooms reside on the lower deck, and a captain’s cabin is off the high-tech wheelhouse, equipped by Team Italia. A Ferrari racing seat takes centre stage at the helm. Crew quarters are forward of the lower-deck cabins. Overall, the yacht accommodates 12 guests within its cavernous 30-foot beam, in addition to nine crew.

Throughout the yacht’s interior, soft fabrics and leather and neutral colors add to the feeling of serenity—as do the vessel’s generators, which, emitting less than 40 decibels of sound, generate just a quiet hum, even when standing next to them in the engine room. A pair of MTU Iron MAN 8V 4000 M63 engines produce 1,360 hp each, propelling Race to a 15-knot top speed and providing a range of 3,000 nautical miles at 12 knots.

The skydeck, the uppermost of the four decks, will likely be a favorite spot for guests, thanks to the requisite hot tub, bar and lounging areas. The shade-supplying radar arch is in bold black, with stylised stainless-steel details easily seen from afar—a unique sight. “Get a look at the exterior navigation lights,” urges the fine-art-loving Galassi over lunch. “They are [like] a sculpture.”

The 50M’s water-level beach club stows a Williams Dieseljet 625 tender when the space is not in use by seaside sunners. But haul that thing out and you can open up the transom door and side hatch to take advantage of this sea-level entertainment deck and its breezy, open-air lounge with easy access to the water.

Besides kicking off a new superyacht series for Riva, the 50M lets the brand claim a spot at Ferretti Group’s new Superyacht Division in Ancona, Italy, where subsequent vessels will share construction space with the company’s other large bespoke yachts. Another thing they share: fulfilling ocean-lovers’ deepest desires.