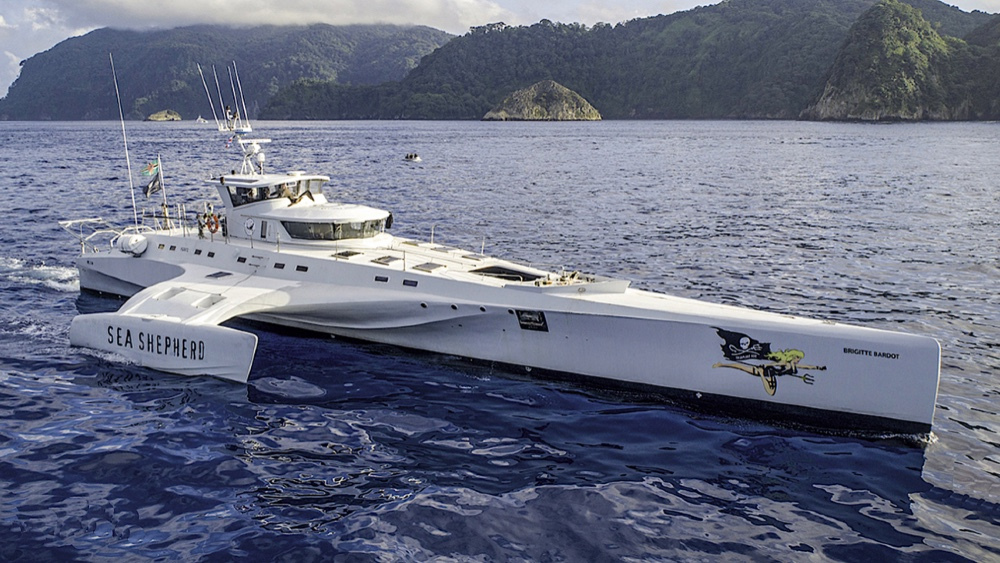 She’s fast. So fast that back in 1998 she scorched around the globe in less than 80 days, setting a new Guinness World Record with a time of 74 days, 20 hours and 58 minutes.

She’s got the range, too. Over 4,000 miles on a single tank. New York to London with fuel to spare. A range that, over the years, has helped her circumnavigate the world no fewer than six times.

And she’s helped change the world. As part of the Sea Shepherd Conservation Society (SSCS) fleet since 2010, this rugged 109-foot trimaran has locked horns with Japanese whaling ships in the Antarctic, Chinese squid boats off the Galapagos, and tackled Bluefin poachers in the Mediterranean. 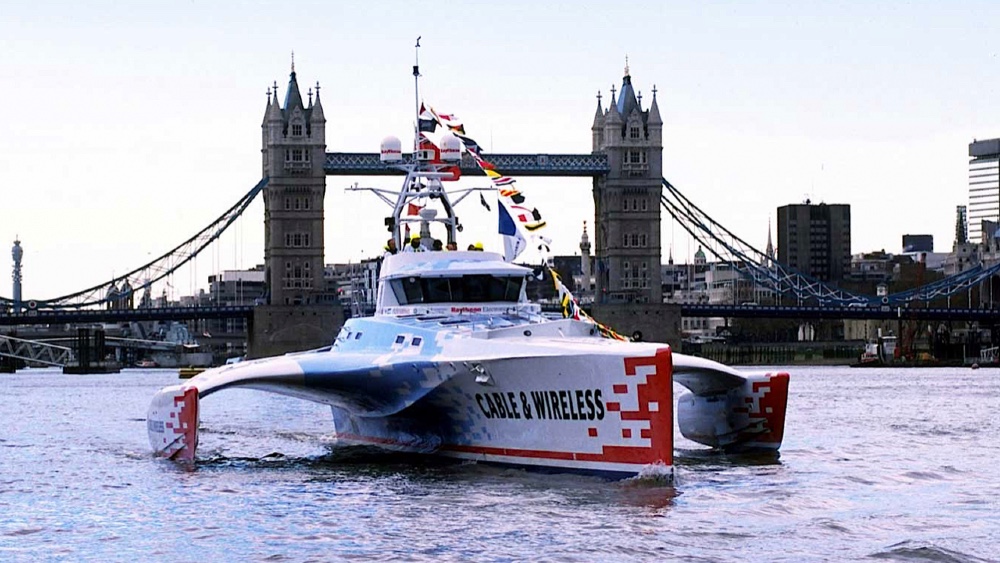 The 109-footer was designed to set a circumnavigation record, which she did in 1998, circling the world in less than 75 days. Nigel Irens

Now, the legendary Brigitte Bardot, with a for-sale sign in her wheelhouse window, is ready and raring for her next adventure. “Vessels don’t come more unique than this,” Joaquin Genrich, the listing broker with Fraser Yachts, told Robb Report. “It could take a family completely off the grid. Throw off the lines and you could get from Puerto Vallarta, where she is right now, to Tahiti on one tank.”

Designed by British multihull guru Nigel Irens and originally named Cable & Wireless Adventurer, this needle-nosed rocket ship was built in 1997 by British yard Vosper Thornycroft for the sole purpose of circling the world in less than 80 days. Mission accomplished, she was renamed Ocean 7 Adventurer, relocated to Cape Town, South Africa, and started a new career as a charter vessel.

In December 2007, she hit the headlines when she charged into the Southern Ocean to perform a daring rescue of the demasted racing yacht Delta Dore. After locating the yacht, she towed it 960 miles back to Cape Town. Three years later, she was bought by Sea Shepherd, renamed Gojira—that’s Japanese for Godzilla—and sent off to track down illegal Japanese whaling factory ships in the Antarctic. In locating the Nisshin Maru whaler in the icy Ross Sea, Gojira set a record for traveling farther south than any other multihull in history. 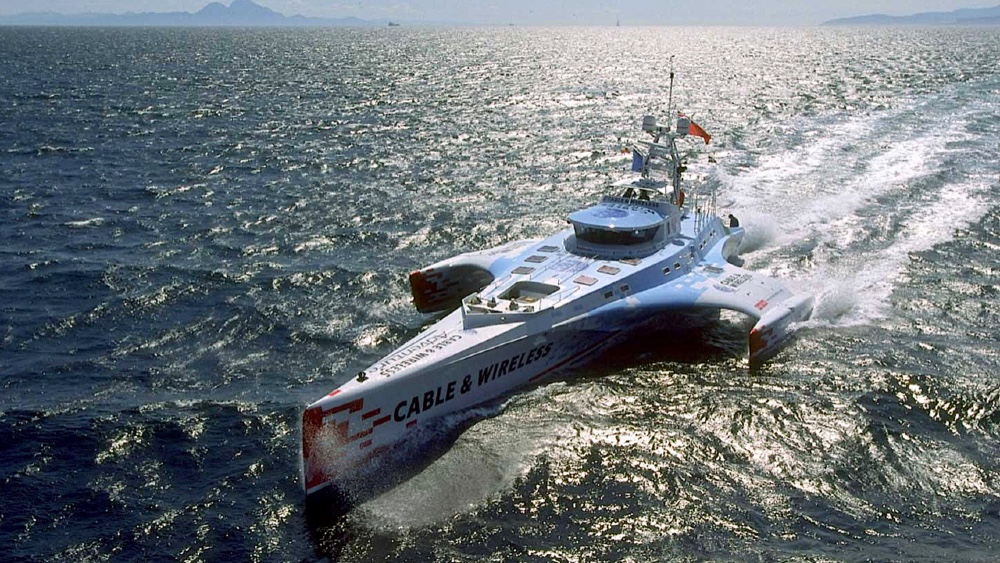 Sea Shepherd bought her in 2010 and used her to hunt illegal poaching vessels, including Japanese whale-factory ships and Chinese squid boats in the Galapagos. Nigel Irens

When the Japanese owners of the Godzilla movie franchise threatened legal action for unauthorized use of the trademark, SSCS changed the vessel’s name to Brigitte Bardot, in honour of the French model and actor and her long-standing support of Sea Shepherd.

Since then, the trimaran has travelled to all four corners of the world; Australia, New Zealand, the Faroe Islands, the Mediterranean, Caribbean and even Key West, where she helped protect turtles from poachers. With the onset of the Covid-19 pandemic, the boat was relocated from the Galápagos Islands, where she was on patrol, to Marina Riviera Nayarit, in La Cruz outside Puerto Vallarta, Mexico. A few weeks ago, the decision was taken to sell.

“These days Sea Shepherd Conservation Society is working more with governments and requiring larger vessels that can accommodate military personnel. Sadly, she’s become too small for our needs,” says Octavia Carranza, who captained Brigitte Bardot on missions to Peru in 2018. 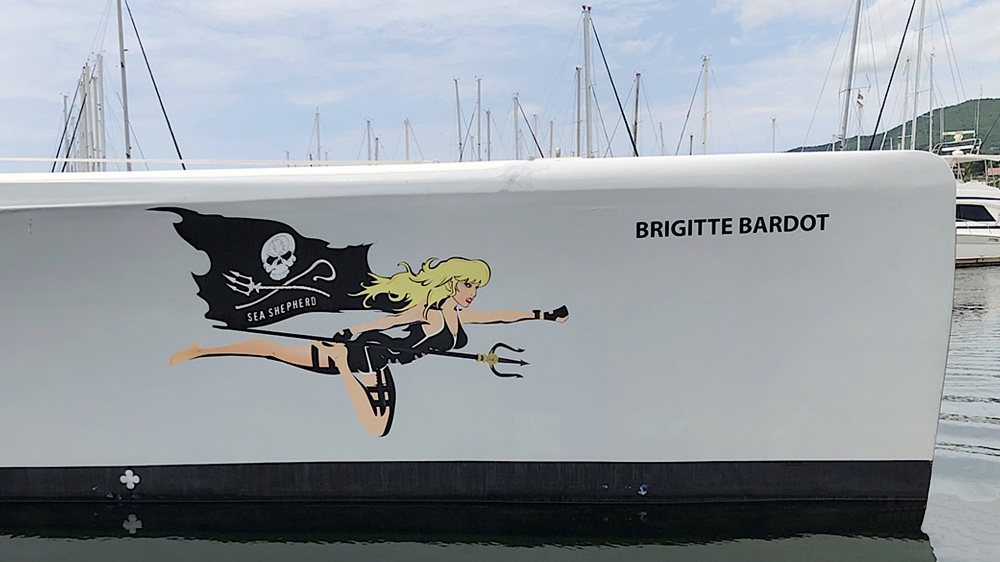 The vessel was named Gojira—Japanese for “Godzilla”—but when the movie’s producers threatened legal action, she became ‘Brigitte Bardot,’ who is a big supporter of Sea Shepherd. Fraser Yachts

“We’ll definitely be sorry to see her go. She’s a remarkable vessel. Extremely fast, cruising easily at 22 to 25 knots. What I always found amazing was sitting on the bridge and watching her slice through the water like a knife,” Captain Carranza told Robb Report.

Prospective buyers should remember that this is not some pristine luxury motoryacht. Far from it. Since her first day on the water, she’s been driven hard and put away wet. Her interior is no-frills-basic at best. Two years ago, she was expensively re-powered with two new 500-horsepower Cummins QSC 8.3-liter turbo diesels, replacing the previous 350-horse versions. Top speed is now close to 30 knots.

Genrich says the boat’s comparatively low £1.13 million asking price leaves plenty of room for a comprehensive refit. He is also quick to point out that Sea Shepherd is a “highly motivated” seller. 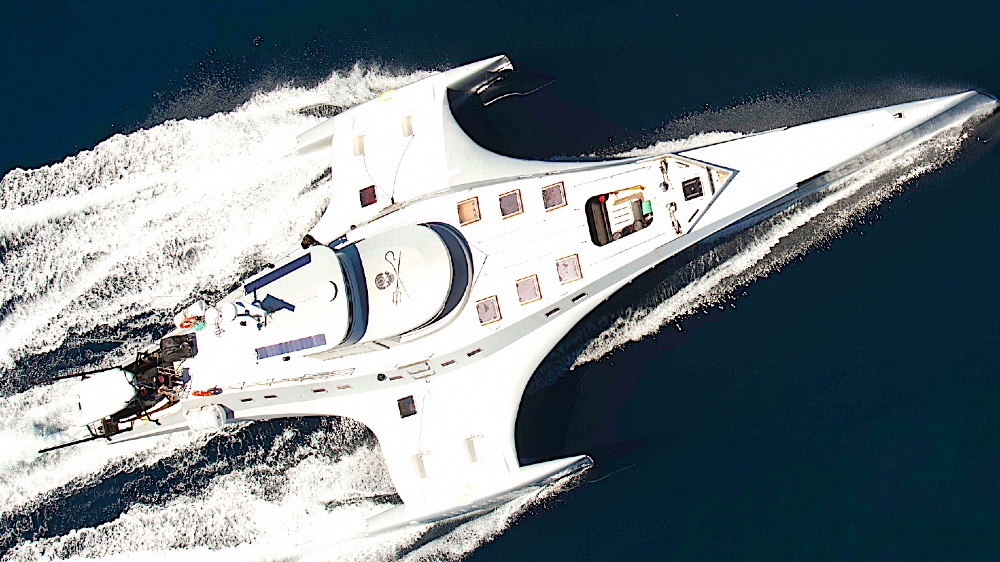 Repowered recently, the yacht has a new top speed of 30 knots. She has circled the globe six times in her 32-year history. Fraser Yachts

Who’s going to buy her? Genrich reckons it might be someone looking to head out on another world-circling adventure. Or someone eager to own a piece of history. Or someone who just wants to own a really cool boat.

“One thing’s certain, Brigitte Bardot will take you anywhere you want,” he says.

To find out more about the work of the Sea Shepherd Conservation Society, go to http://www.seashepherd.org.