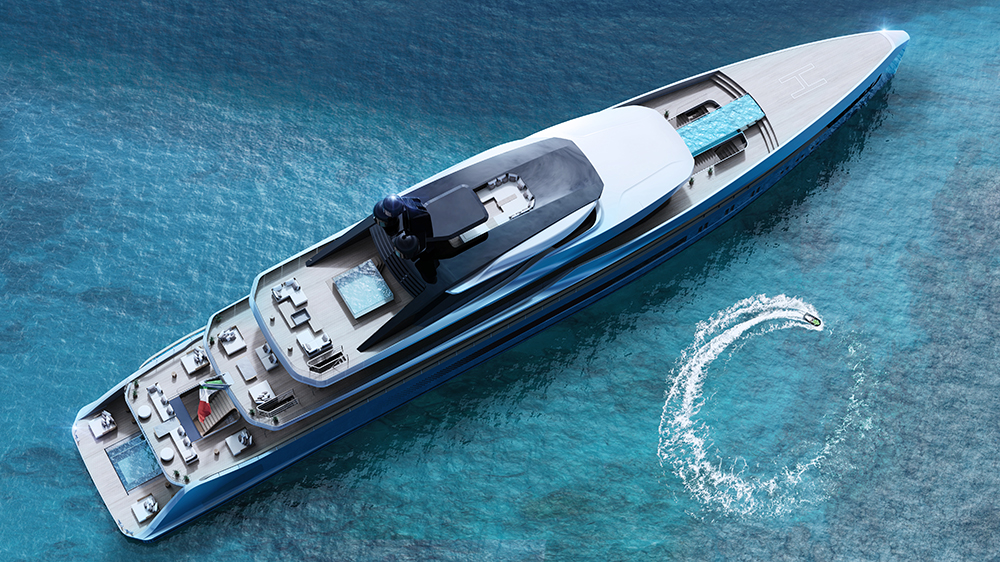 “There’s a clamour in yacht design to find something with a younger appeal,” says Ian Sherwood, broker for Burgess Yachts, which is overseeing the build of the 114-foot Project Fox. Designed for a buyer in their 20s or 30s, the tall, forward superstructure is connected to a giant, open aft deck; although based on an explorer yacht, it looks less like a conventional expedition vessel and more like its shadow boat – and that’s the point.

“The new generation of owners wants the ability to do more than just sit at anchor,” Sherwood says. Hence, Project Fox’s 1,200-square-foot rear deck can hold amphibious vehicles, submersibles, Jet Skis, a pair of 25-foot tenders and scuba gear; with clear decks, it becomes a sprawling social area. Fittingly, the yacht will also come equipped with a DJ booth, a wine cellar, a media sky lounge and a dedicated barbecue space.

“The new generation wants 20 friends, the best chef, a DJ – everything at their fingertips,” says Alberto Mancini, who recently released Tankoa’s 250-foot Apache concept. “They like the idea of a private island in the middle of the sea, away from crowds.” A wild reinterpretation of a conventional superyacht, Apache features vast, covered outdoor social spaces, three pools – including a 30-foot-long glass-bottomed example near the main suite – and a beach club with foldout sides that expands to 1,400 square feet. “These new billionaires want to see what yacht designers can do,” Mancini says. “They don’t care if it’s ugly, as long as it delivers the desired experience.”

Another young Italian designer, Valerio Rivellini, pioneered fold-out side decks for day boats. He agrees with Mancini that experience over aesthetics seems to be the mantra among younger buyers. His recently launched Evo V8 incorporates large outdoor spaces, dining areas with powered, self-tinting “smart” windows and up to four helm stations. “Spaces that transition between relaxation and outdoor sports are essential in today’s designs for younger owners,” Rivellini says.

And don’t forget cutting-edge technology. Feadship’s wild new 268-foot Pure concept may best illustrate the dividing line between the old and new schools: Rather than having a traditional pilothouse, it moves operations to a helm area in the yacht’s lower decks – meaning Pure is driven virtually, via projection screens and augmented reality. “The older captains we polled said, ‘Are you crazy? I need to see what I’m doing,’ ” says Farouk Nefzi, Feadship’s chief marketing officer. “The younger generation said, ‘Oh man, this is cool – the ultimate gaming console.’ ”

A rendering of the pilothouse aboard the Feadship Pure yacht.  Courtesy of Feadship

Technology may soon trump interior design for younger owners. Production builders including Princess, Sea Ray and Tiara are adding assisted-docking technology to new models and supplementing it with high-end sound systems and remote boat monitoring controlled via smartphone. “The use of technology on our new V50 has generated a lot of inquiries from younger people,” says Nick Smith, head of product planning at Princess.

A rendering of the Navier 27 Yacht.  Courtesy of Navier

And the sustainable approach that millennials are clamouring for – blending electric propulsion with foils, for example – is already turning up in the day boat market. Sweden’s Candela Boats recently launched its C-8 model, while US builder Navier is constructing a 27-footer with boat-of-the-future looks, claiming it will be the longest-range high-speed electric vessel on the water. Conceived by three MIT graduates, the 27 has an intelligent-software-navigation system coupled with hydrofoils designed by Paul Bieker, who was instrumental in introducing foiling race boats to the America’s Cup. “Our owners are young, tech-savvy and care about sustainability,” says Navier cofounder Sampriti Bhattacharyya, who specialises in robotics and aerospace. “They want an electric boat, but one with range to explore on weekends.” And in the case of the new 27, “want” might be an understatement: The concept proved so popular that the first 15 hull slots sold in just six weeks.