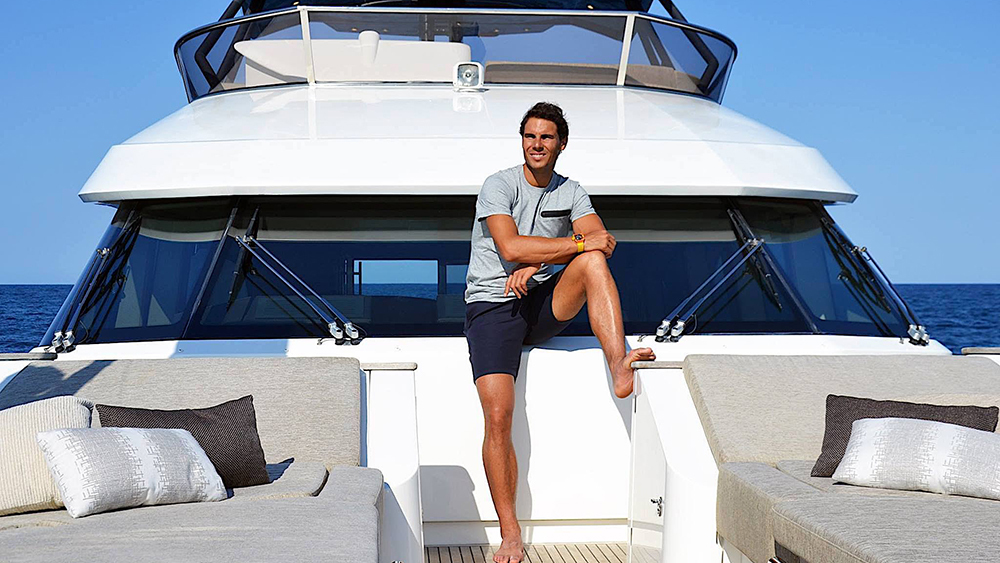 Tennis superstar Rafael Nadal is hoping to “net” a cool £2.3 million for his much-loved 76-foot motor yacht he calls Beethoven after his love for classical music.

The Spaniard has just listed the Italian-built MCY 76 that he bought new in 2016 with European broker Camper & Nicholsons.

Built by Trieste-based Monte Carlo Yachts—part of the French Beneteau group—Nadal’s MCY 76 was designed inside and out by acclaimed Venetian naval-architect firm Nuvolari Lenard. Powered by twin MAN 1,400 hp V-12s, Beethoven has a top speed of 31 knots and cruises happily at 26.

Listed for 2.6 million euros, which is around £2.33 million, the yacht is described as being in mint condition, with low engine hours and all taxes paid.

Longtime yachtsman Nadal, 33, has certainly had plenty of use from the stunning, deep-blue-hulled power yacht. Over the past three years he’s been a regular fixture of social media and gossip columns, often snapped soaking up rays while cruising the Balearic island of Mallorca which he calls home.

Nadal recently told Yachting magazine that Beethoven was key to helping him relax from constant traveling: “Being on board the MCY 76 gives me the chance to get away when I want to get away. I have the boat one minute from my house by car, so in any moment I feel free to say okay, I’ll go and come back tomorrow. That gives me the possibility to relax.”

He says he decided on the MCY 76 after a visit to the Cannes boat show in 2013. Previously owning a Princess V62, Nadal wanted a boat with more space and a sleeker, more sporty, more modern design.

Working with Nuvolari Lenard, the 18-time Grand Slam winner commissioned Beethoven with that head-turning deep Mediterranean-blue hull color and white topsides, along with a carbon-fiber flybridge hardtop with retractable sunroof.

Inside, he selected a four-stateroom layout with a full-beam master suite and angled bed, a forward VIP and two twins. Not to rock the boat, he picked muted shades for the upholstery with lots of grays and soft beiges.

One feature the tennis star was firm on: lots of retractable TVs. As he told Yachting: “I sometimes come on board and live here, so I like to be on a sofa and watching TV in comfort. With the home cinema and two TVs, it is unbelievable for me.”

There’s no word as to what ‘Rafa’ plans to do when Beethoven sells. What’s unlikely is that he’ll step up to a much bigger yacht. Seems his home port of Porto Cristo on Mallorca’s southeast coast can only accommodate yachts up to 25 meters, or 82 feet.

Don’t be surprised then if Nadal turns up in Porto Cristo in one of Monte Carlo Yachts’ brand-new MCY 80 yachts—perfect at 24.62 meters (80 feet).