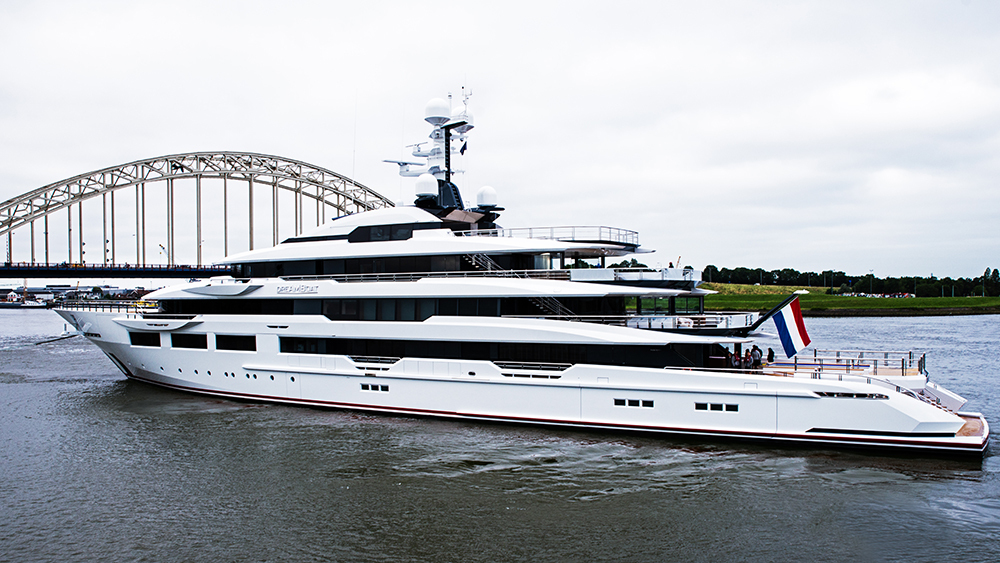 The build represents a first-time collaboration for long-time friends Terence Disdale and Espen Øino—two of the most celebrated yacht designers in the industry. The partnership, which saw Øino penning the engaging exterior and Disdale creating the elegant interior, was a winning formula for the owner who stepped into the project once the hull and superstructure were already complete.

“From the first time the owner saw the boat—still in pink faring compound in the outfitting facility—and met all involved in the project, he knew that the combination of Espen’s timeless exterior, Terence Disdale’s elegant and calming interior and Oceanco’s ability to deliver the boat on time and to the quality he required, was just right for him,” says Dan Jackson, the owner’s representative. “So, after some minor enhancements made to suit him and his family, we got right into it and here we are.”

Fully bespoke inside and out, Dreamboat‘s full-carbon canopy mast house and mast form an integral part of the overall design, as do generous overhangs from the aluminium superstructure and cutouts in the bulwarks.

True to form, Disdale has delivered an interior awash with natural wood, limestone floors, semiprecious stone vanities, parchment, leather and mother-of-pearl. “We always strive to avoid the ‘big wow’ factor that soon becomes boring. We believe that Dreamboat with her quietly sophisticated interior is indeed a future classic,” he says.

A key feature is the expansive windows that flood the interior with natural light and provide incredible vistas out to sea, while a 20-foot swimming pool on the main deck provides the ideal place for guests to cool off when on board. A further two Jacuzzis (one located on the private owner’s deck) as well as a spa on the bridge deck aft equipped with a custom-built hydro/massage bath mean no guest need ever be left waiting out in the dry. And for those warm summer evenings, an outdoor open cinema on the sundeck—pitched to be the hub of the yacht—makes cosy starlit film nights a luxurious reality.

Abundant deck space makes for all kinds of entertaining and lounging, inside and out. Photo: Francisco Jose Martinez Mendez

“The exterior deck areas flow seamlessly into the interior spaces maintaining continuity and consistency,” says Øino. “The external decks offer a variety of living spaces and experiences with the sundeck probably being the biggest in its class with ample space for entertainment and lounging both in the shade and in the sun.”

Dreamboat’s 2,950 gross tonnes create enough volume to accommodate an incredible 23 guests, as well as 33 crew members. Family life is at the centre of the design, with the owner reported to be looking forward to a summer season of cruising with family—his children and grandchildren—as well as with friends. An armada of water toys (including a custom-built diving board), tenders and state-of-the-art AV/IT (think gaming on big screens) is balanced by the yacht’s eco credentials. Both a heat recovery system and an ECO-IHM (inventory of hazardous materials) notation confirms a commitment to operating the vessel on an environmentally sound basis.