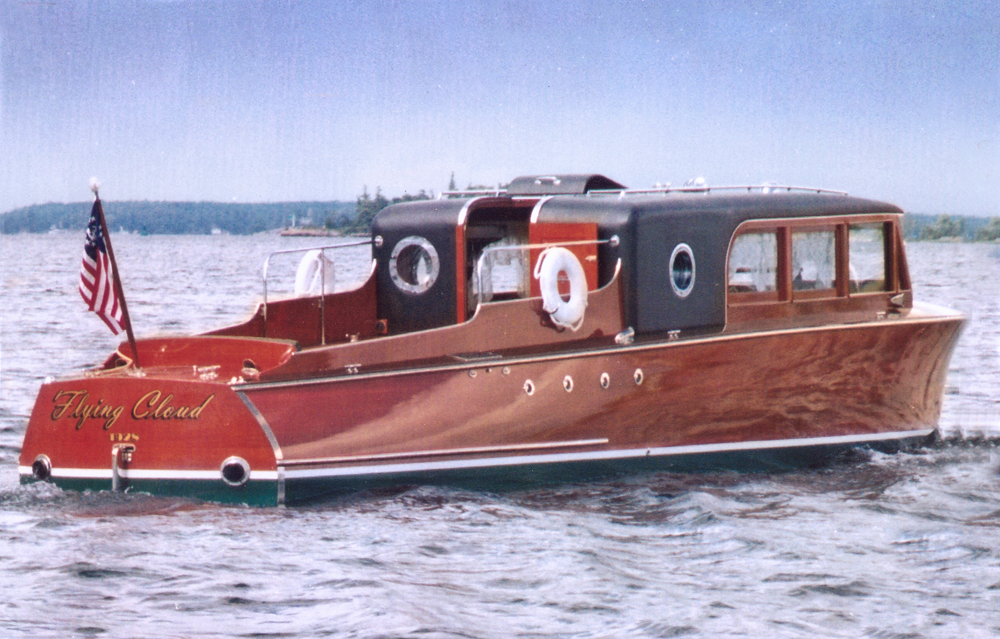 Say hello to my little friend, a rare Robinson Seagull mahogany cruiser that goes by the name of Flying Cloud. This 36-foot antique Hacker mini-yacht is one of just a few remaining today, and rumour has it that 1920s American mobster, Al “Scarface” Capone, was its alleged one-time owner.

Flying Cloud had not one, but two famous owners, and they are as different as chalk and cheese. Originally built in 1928 for automobile magnate Ransom E. Olds, the boat was the first Robinson Seagull model, designed to combine the elegance of a yacht with the speed and sleekness of a runabout.

Those hand-crafted boats became popular with wealthy Wall Street bankers commuting between Long Island and New York City. But the luxuriously outfitted Flying Cloud only remained in the Olds family for two years before being sold to a fellow winter resident in Miami Beach. Someone with cash to burn and in need of a classy, high-speed cruiser.

Al Capone, leader of the notorious Chicago Outfit who became Public Enemy No. 1, rose to recognition during America’s Prohibition era. His seven-year reign as a crime lord focused on the practice of supplying alcohol to underground speakeasies with the intent of circumventing tax and prohibition laws. Cheap Caribbean rum was illegally transported from Cuba or Bimini across the pond to Florida, otherwise known as rum-running. By the time the runners were smuggling high-profit alcohol–such as Canadian whiskey, French champagne and English gin—it’s thought some boats carried as much as ‘200 large’ (US$200,000 worth) in a single run.

“There’s lots of speculation as to whether or not Flying Cloud was a rum-runner because in those days, boats coming up from Cuba or Puerto Rico were not permitted to come within five miles of shore,” Peter Mellon, founder of Antique Boat America told Robb Report. “And so rum-runners would run out to the five-mile limit to load up with the contraband and then return to shore.”

There is no evidence of such illegal activity taking place aboard Flying Cloud, but a black-and-white photo of Capone pictured at the stern could be taken as proof of ownership, says Mellon. Designed for entertaining and now powered by a Mercruiser 2001 engine, Flying Cloud would certainly suit Capone’s tastes and needs.

Flying Cloud was designed as a fast commuter for Long Island bankers, so the interior had features like a private lavatory, galley and drop-down card table for wealthy owners. Brackley Boats

Fitted with Pullman berths, a galley, ice-box, clothes lockers and a separate head with a fold-down lavatory, Flying Cloud would have cost sin the region of US$15,000 to buy, “probably as much, if not more, than the cost of four or five houses in 1929,” says Mellon.

An integrated card table in the interior folds down on one side. “It’s designed quite cleverly, and the drink holders are large enough to hold full bottles of alcohol, not just a tumbler or rock glass,” says Mellon. “I have this vision of a couple of guys playing poker at a small table while they’re cruising down a body of water.”

One man actually had the vision to bring Flying Cloud back to life. When Clay Thompson bought the boat in 1995, he had no idea of its historical significance, or that it had two famous owners. Thompson just wanted to restore the weather-beaten boat to its former glory. Flying Cloud was a mess–the mahogany veneer had been stripped by being left outside for decades and there was no motor. Over the next five years, Thompson painstakingly restored the boat, section by section, in a lot near his home in Oklahoma.

“We did the sides, then the bow, transom and interior,” Thompson told Robb Report, who learned of its history and ownership. “We contacted the Olds family, who confirmed they owned it, and they told us that Flying Cloud was their ‘small’ boat. They loved it because they could get it in the smaller canals in South Florida. It was also one of the few boats that could run fast because it could get up on plane. It had a racing boat hull.”

Al Capone’s son, Sonny, also sent Thompson some pictures of the boat in its early days. Thompson’s restoration is generally considered one of the best in antique boat circles, partly because of the attention to detail that he employed, but also because of Flying Cloud‘s unusual historical importance.

“We were aware of the Capone connection after doing the research, but i always downplayed it, because the boat deserves the attention, not the owner,” says Thompson. “It’s real history of the age of American commuter-style boats. So few exist, and this one was one of the first.”

A rare picture of Al Capone enjoying Flying Cloud with his son, Sonny, in the cockpit. Thompson Collection

Still, the Capone connection has given Flying Cloud special significance. Jonathan Eig, author of Get Capone, confirms that the mobster had a boat on which he is pictured, and that “he liked to fish.” When in Florida, Capone would visit the Florida Keys. “He would also sometimes go as far as the Caribbean supposedly, and travel to Cuba,” Eig told Robb Report.

Capone liked to think big, even when it came to boats. A second 110-foot yacht is believed to have been sold to Capone at the same time as Flying Cloud, and the 96-foot Isla Morada is also rumoured to have come under his control, if not outright ownership.

Isla Morada, which is now doing tours of the Panama Canal, had five staterooms and rumour has it that they were filled with rum on runs between Cuba and Key West. Another yacht, a 76-footer called Duchess III, was also thought to be under Capone’s control, according to a 1993 story in the Los Angeles Times. A researcher for the show, “The Untouchables” went to visit the yacht, but couldn’t find any record of Capone’s ownership. That yacht was also said to be haunted.

The 96-foot Islamorada, now giving tours in the Panama Canal, was allegedly used and owned by the Capone syndicate to run rum between Cuba and Key West. Shutterstock

In 1931, the yachting party was over. Prosecuted for tax evasion, Capone served a seven-year prison sentence in the infamous Alcatraz prison. His assets were seized by the Internal Revenue Service.

“I don’t recall ever seeing the name of his boat and I certainly don’t recall it being listed as an asset in the IRS investigation, but that doesn’t mean it wasn’t his boat, it just means that I haven’t seen proof of it,” says Eig.

In 1937, when the US government was permitted to sell off the seized assets, Flying Cloud – by this point stripped of its name—was purchased by a Mr. Welsh, and spent more than 20 anonymous years on the waterfront until Thompson and his family in Oklahoma fell in love with it, and began the long road back to restoration.

Capone was more than just a gangster stereotype. He loved fishing, playing music and even composing songs. During his time at Alcatraz, he learned to play banjo and formed a band called the Rock Islanders. Shutterstock

The legend lives on. Mellon, who sold Flying Cloud two years ago to her current owner, says the cache of Capone endures. “It’s a terrific collector’s piece because it has such a unique story,” he says. “Purity and correctness are important in the antiques trade, and today she is an accurate reflection of the original build.”

What Mellon finds most interesting about the boat is its two unique owners. “Classic car enthusiasts love hearing the story about Ransom Olds, and others are drawn to the Capone connection,” he says. “And the boat itself just has a kind of allure. I’ve been selling antique boats for over 20 years and I have only seen two Robinson Seagulls. There are very few of these boats still in existence.”