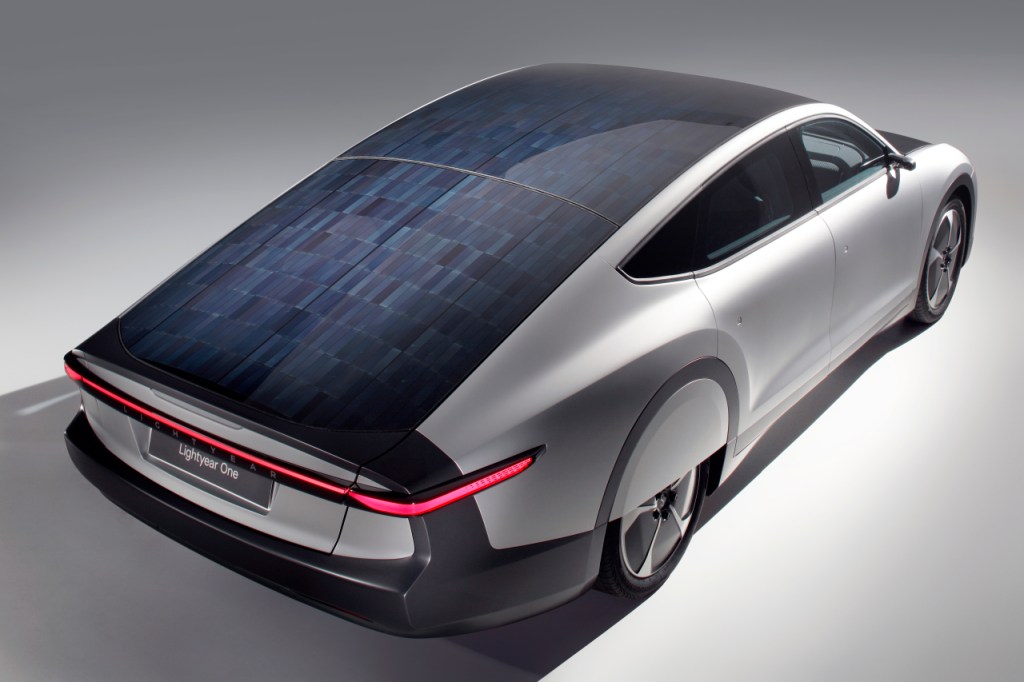 It’s not just Britain’s Tupperware skies that make the idea of being powered by sunlight from London to Inverness preposterous: the weight and cost of solar panels is another major sticking point too. Which is why you can use the word “miraculous” without fear of hyperbole, when describing the vehicle before you’s 450-mile range.

Expected to be commercially available by the end of this year for around £130,00 before taxes, Lightyear One – which is charged directly via solar roof panels, and is almost three times more energy-efficient than the current crop of EVs – is a collaboration between the Dutch start-up Lightyear and tyre giants Bridgestone.

The series of engineering masterstrokes that make the range possible include its aerodynamic, 5.1m-long teardrop form and Enliten: Bridgestone’s lightweight tyre technology, which is made from minimal raw materials and yet significantly lessens rolling resistance on the company’s specially engineered Turanza Eco tyres (tread, inflation pressures and dimensions are all part of the magical formula).

Petrolheads will scoff at the performance credentials (0-62mph sprint takes “less than 10 seconds”, according to Lightyear), but – with 50 percent of European drivers considering fully electric vehicles, while 37 per cent are still wary about range, according to Bridgestone research – those embracing the electric vehicle revolution will marvel at the distance capabilities of a vehicle which can also be plugged into the mains at home (you’ll milk 22 miles out of a single hour’s charge from a home socket, 354 miles in one hour from a 60kW fast charger).

The limited production run (just 946 vehicles are planned) will be sold in the EU, Switzerland and Norway: but it’s surely only a matter of time before UK drivers can test out the London to Inverness credentials – and without one eye on the weather forecast.