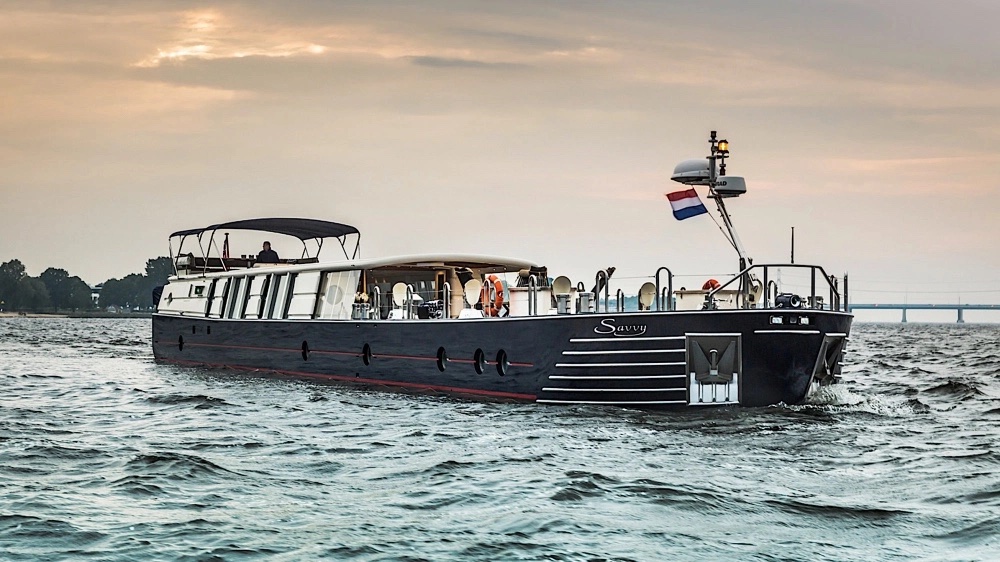 You can’t park a superyacht in Paris or Prague. You can’t take one to Champagne to quaff bubbly either. But you can aboard Savvy, the world’s first super-luxury, superyacht barge.

Designed to ply the narrow, shallow, low-bridged canals and rivers of Europe in style, Savvy was built back in 2004 by leading Dutch superyacht yard Hakvoort, with a stunning interior by British superyacht specialists H2Design. For the past five years, she’s taken her current owner, well-known British entrepreneur Peter de Savary—hence the barge’s name—on a grand adventure around Europe’s inland waterways. 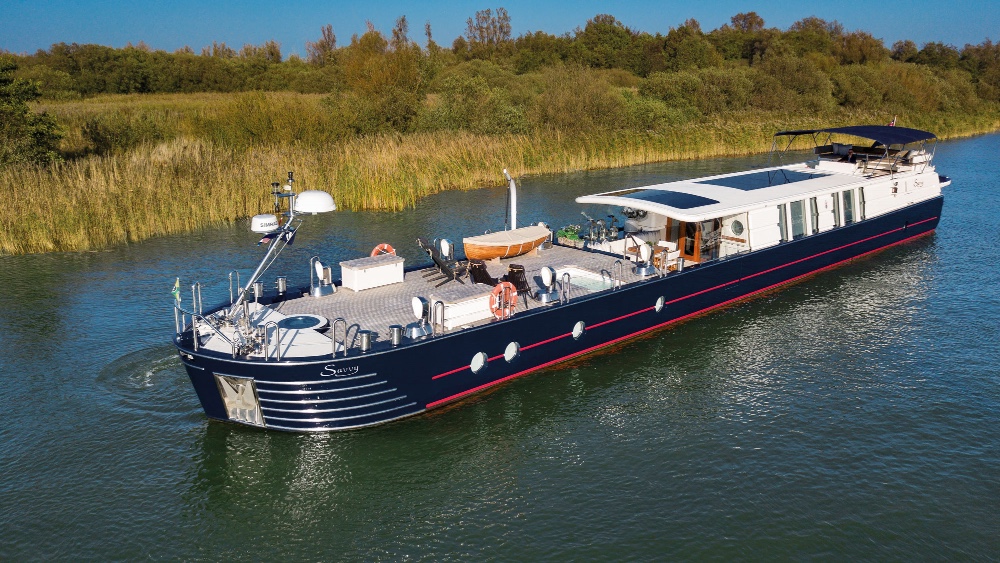 Savvy’s super-sized exterior provides maximum comfort, including a Jacuzzi, while the interior is bright and contemporary. Courtesy Peter Insull

His boating escapades have included leading the British team in the 1983 America’s Cup, founding the Pendennis yacht refit yard in the UK, and owning such iconic vessels as Richard Burton and Elizabeth Taylor’s 165-foot Kalizma.

“Savvy is like the best luxury penthouse you’ll find in Milan or Manhattan,” de Savary told Robb Report. “She’s taken us everywhere, from Holland to Belgium, and through northern France and Germany. I’m serious when I say she’s the most luxurious, most stylish and best-equipped yacht I’ve ever owned.”

She is quite the contrast to most canal boats, which are typically designed as comfortable but utilitarian transport, often under 40 feet. The queen of the canals, Savvy is over 97-feet long, with a slender 15-foot beam and draft of just under 4 feet. The 180-ton steel super-barge has the perfect dimensions to go anywhere, including the picturesque, though typically depth-challenged French canal system. 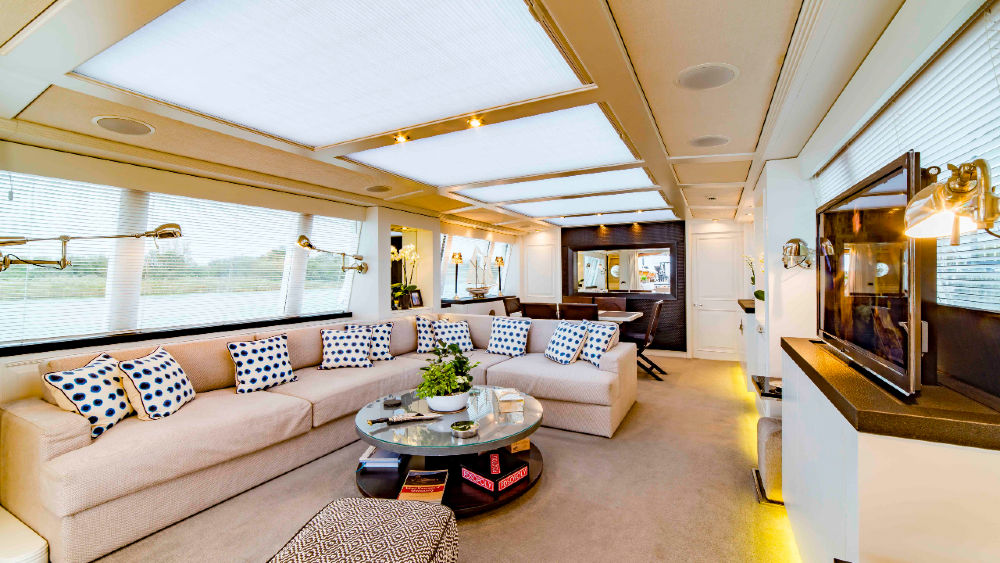 This interior might seem more at home under the Monaco skyline, but it’s also ideal for small canal-side villages in Holland or France. Courtesy Peter Insull

Size aside, what really sets Savvy apart is her diesel-electric hybrid propulsion system. Two big Northern Lights generators charge a huge bank of batteries, providing juice to a 110-kW electric motor. This can propel the barge at 6 mph, or push it to a top speed of 8 mph. While that may not sound fast, remember that canal cruising is all about the journey, not the destination.

“There’s tremendous flexibility. We use one of the two bigger generators to put charge in the batteries for slow cruising,” de Savary says. “For more speed on big rivers, we fire-up the second generator for more power. Even with all the generators running, there’s hardly a sound and virtually no vibration.” And the setup has proven remarkably economical: The boat burns just over five gallons of diesel per hour and has an impressive 750-mile range.

As for those luxury accommodations, they include a full-width owner’s stateroom, below-decks in the bow. Back along a corridor is a twin-bed cabin, plus an office/study with a single bed that can extend to become a double. Step down from the forward teak-covered foredeck, with its hide-away Jacuzzi, and a covered outside lounging area has a comfy sofa and table. Close by, fold-back doors lead into the bright, airy salon, dining area and well-equipped galley. 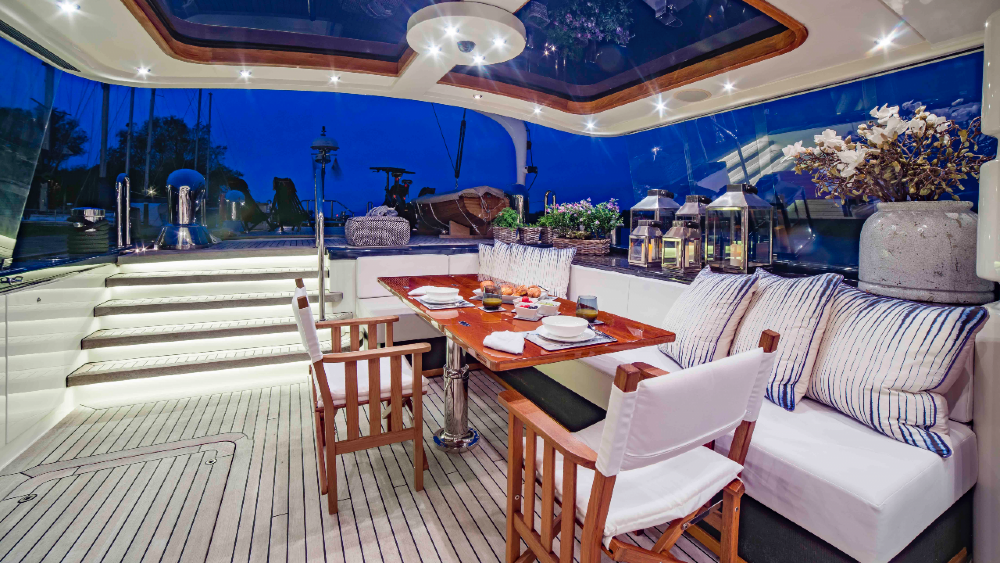 Teak decks and a spacious lounge and dining table make the exterior as pleasant as any oceangoing yacht. Courtesy Peter Insull

At the stern, the helm station and large sofa are for both driving and watching the world go by, ever-so-slowly. From this deck is access to the spacious crew quarters, with two cabins, shower and galley.

Just before he bought Savvy in 2016, De Savary says the previous owner had splashed close to £1 million on new furniture and upholstery. Since then, PdeS—as he’s known—has spent over $500,000 with Hakvoort, renewing the barge’s Lloyd’s 100A1 classification. “It makes a wonderful and unique pied-à-terre, and before Covid, it was great for business meetings and entertaining. Everyone wanted to come aboard,” he says.

Recently, however, de Savary made the decision to sell, listing Savvy with broker Peter Insull with a roughly £1.95 million price. It seems that he’s just bought a house on the Spanish island of Majorca where he keeps his elegant 65-foot Royal Huisman cruiser Hush. Other boats in his “fleet” include a newly restored 1964 Riva Tritone he has in Newport, Rhode Island, and a classic ’60s Fairey Swordsman he keeps on the River Dart. It’ll soon be joined by a gleaming, former Venice water taxi. 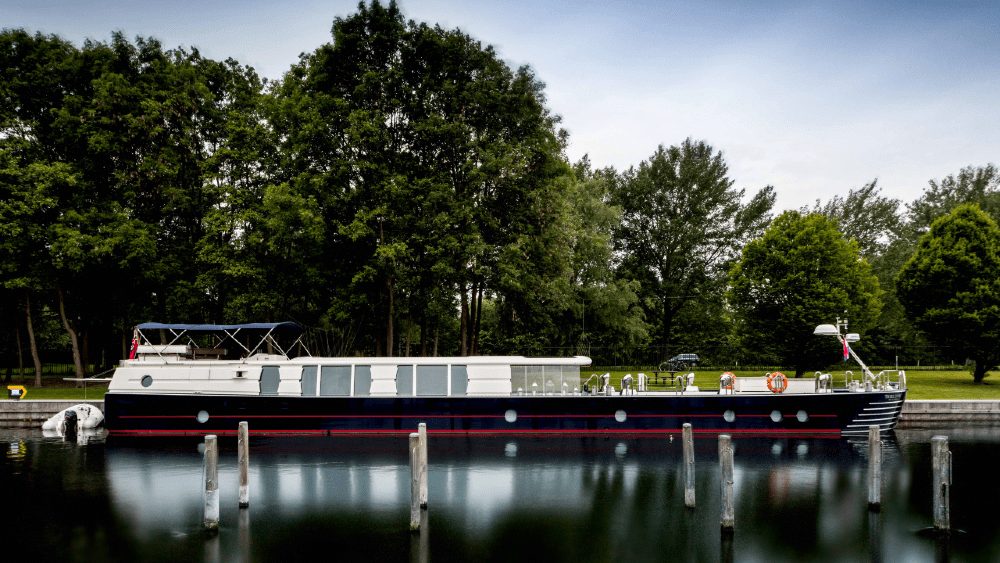 She’ll take up maximum mooring space, but the 97-foot length makes Savvy a boat that could be lived aboard for months. Courtesy Peter Insull

“For an American buyer I think it would be amazing to take Savvy by ship to the US and do the Intracoastal and Great Loop,” says De Savary. “Or take it back to cruise France and Holland. The possibilities are endless.”

Here are some of Savvy’s other assets. 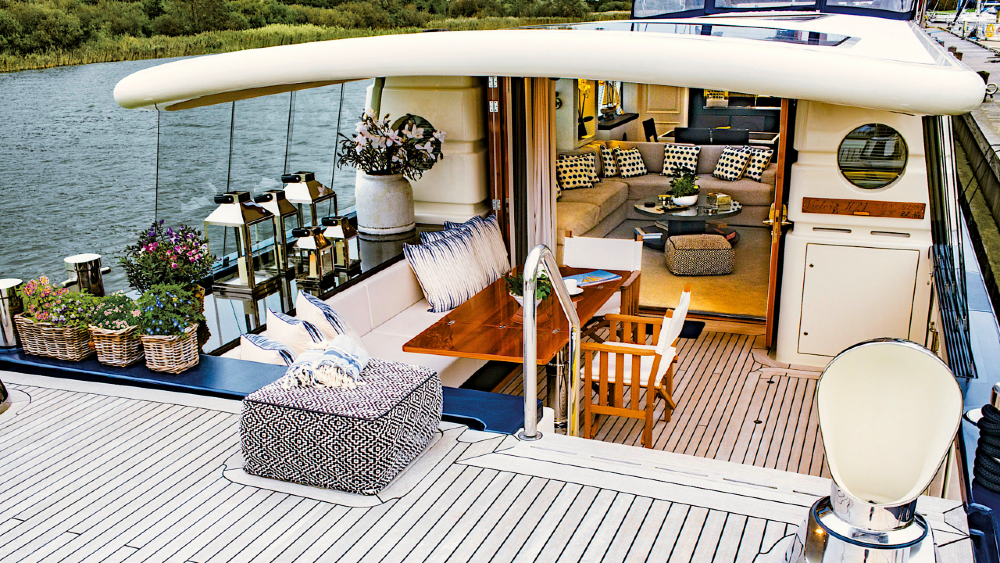 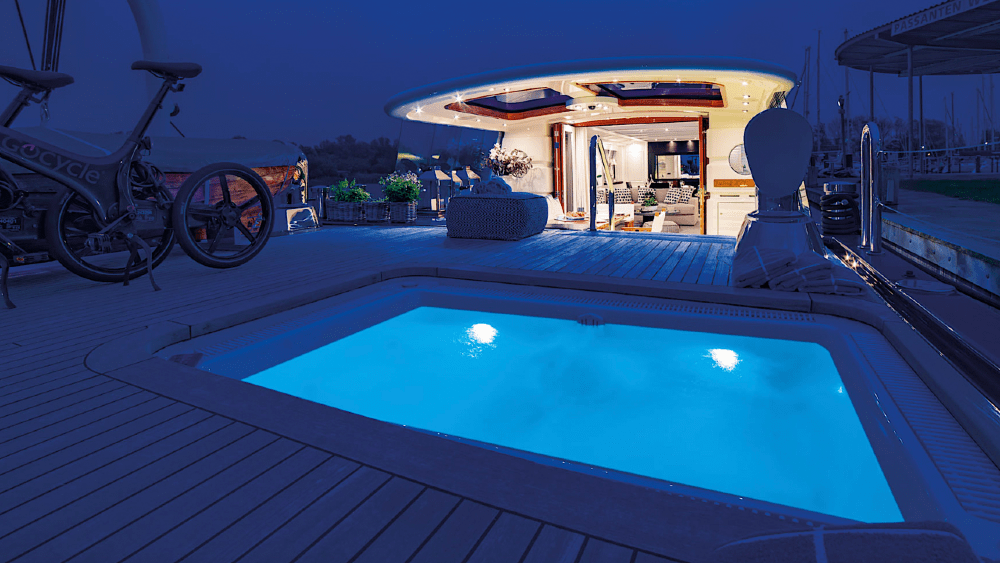 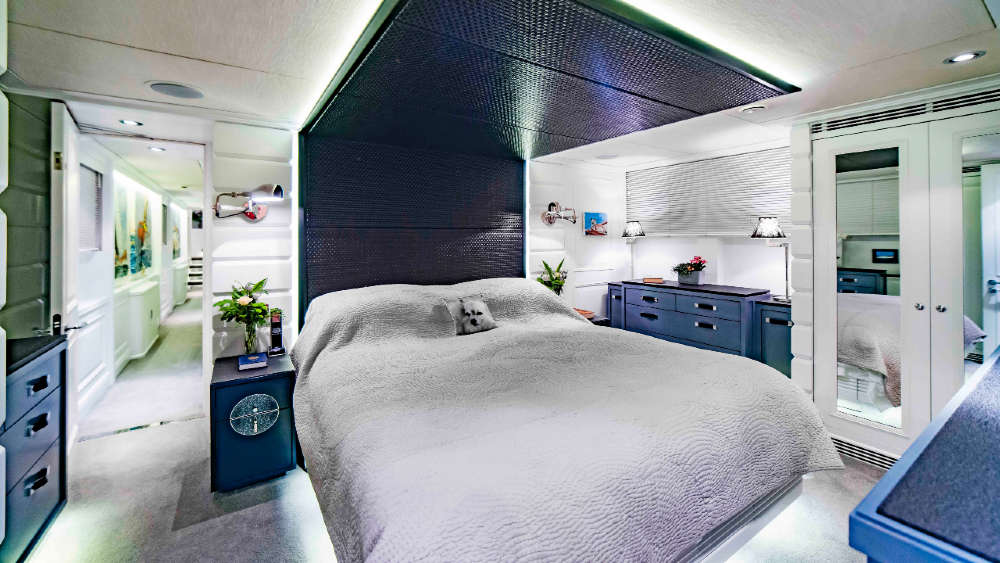 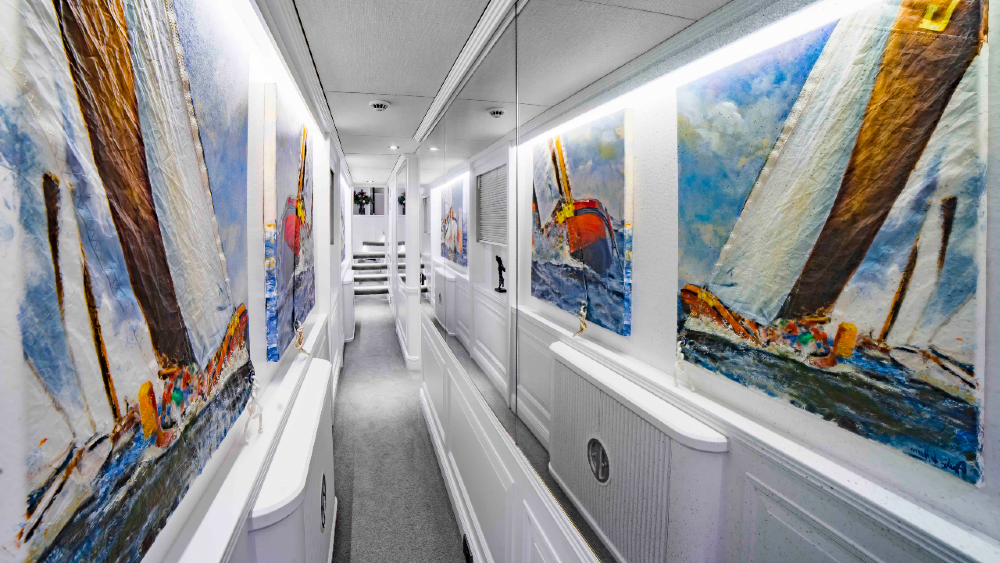 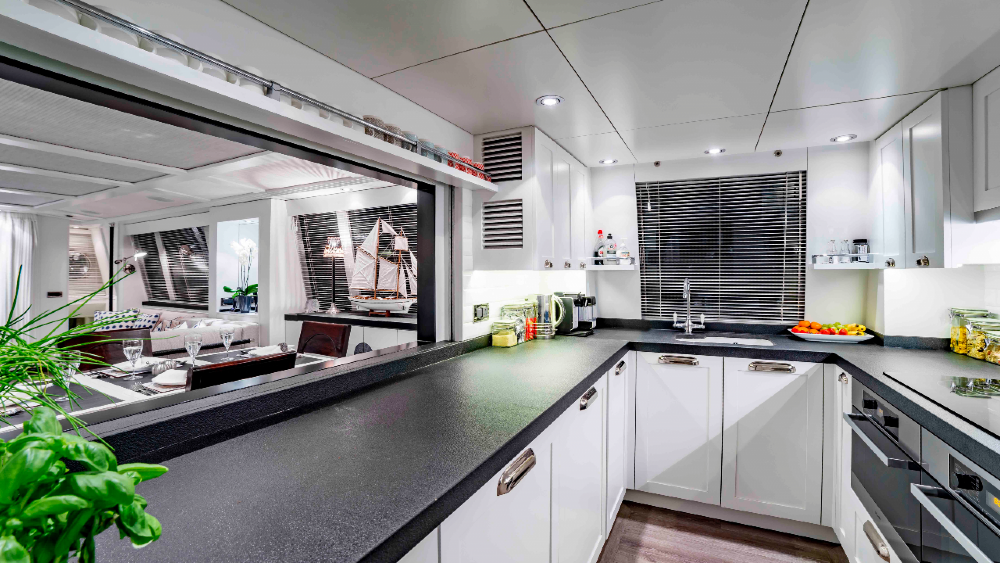 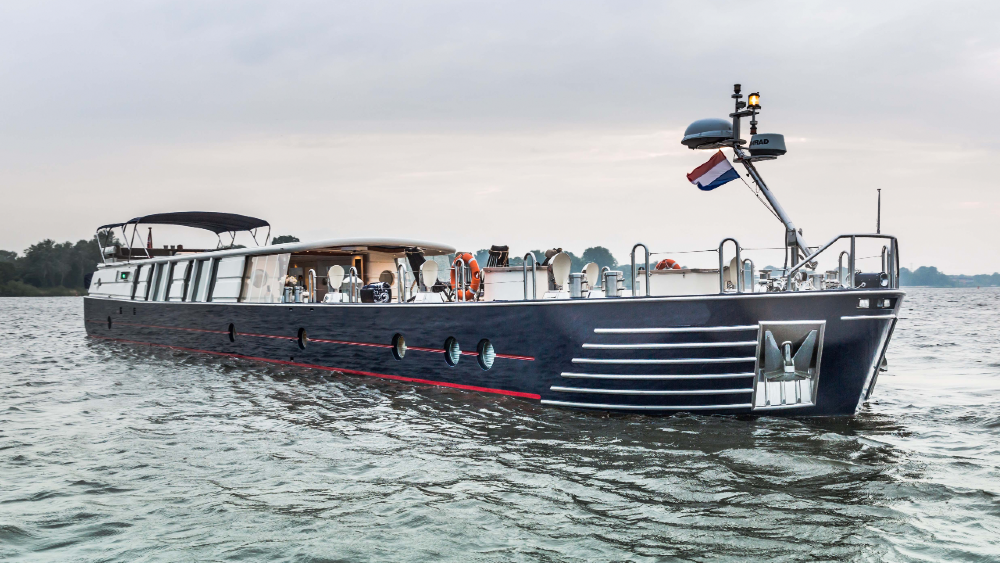