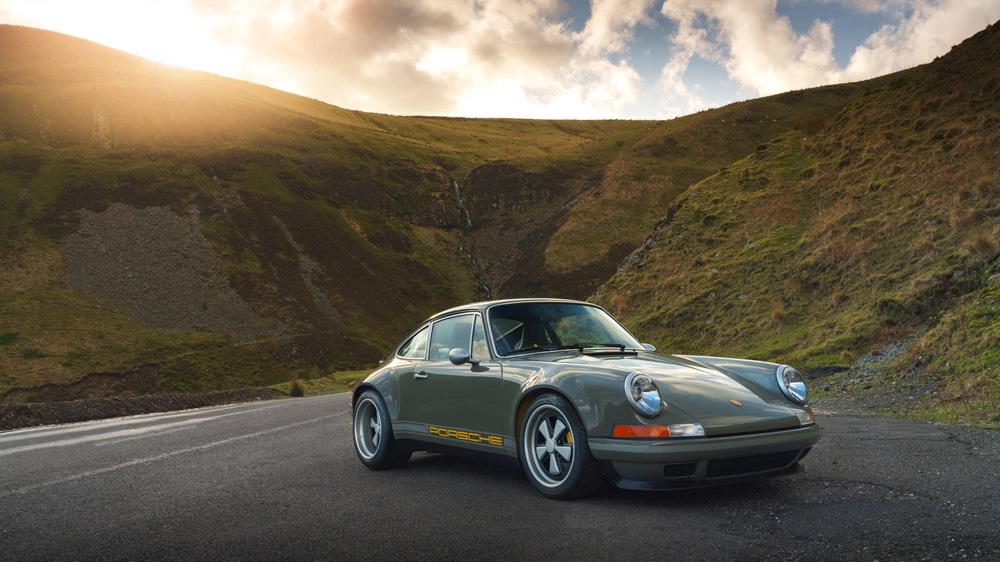 “People always mention the S-word,” says Adam Hawley, cofounder of Theon Design. “But our approach is different to Singer. We refine the air-cooled Porsche 911, we don’t try to reinvent it. These are already fantastic sports cars, after all.”

An experienced car designer with stints at Lotus, BMW, Lexus and Jaguar on his résumé, Hawley has a Porsche obsession that started early. “I had a green 930 Turbo—it was the only toy car I didn’t smash up,” he laughs. “I’ve loved 911s ever since.”

Theon Design is based near Silverstone in England’s “motorsport valley,” with ready access to world-class engineering talent and specialist suppliers. It builds just three cars per year, a process that takes 18 months from initial 3-D modelling to the finished article. Prices start from $415,000, plus the cost of a donor Porsche 964 (the 911 model made from 1989 through 1993), which Theon can source for you. 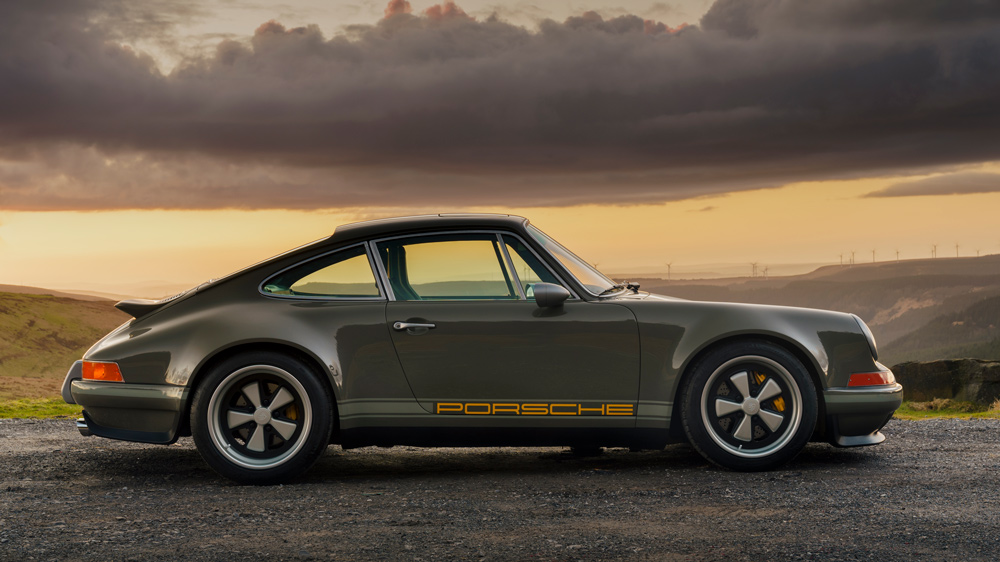 The car I’m here to drive is the “Hong Kong 002” commission, named after the location of its soon-to-be owner. Its khaki-green paint and ducktail spoiler look low-key, but swollen fenders and deep-dish Fuchs rims bristle with intent. There are nods to Neunelfer history wherever you look, too. Bullet mirrors are inspired by the 991 Speedster, the embossed rear bumper evokes pre-1974 cars and quad tailpipes pay homage to the Turbo.

Inside, there’s more to keep Porschephiles guessing. The recessed green gauges, for instance, are another throwback to early, pre-impact bumper 911s, and the door armrests mimic those of the 356. All the interior panels are Formula 1–grade carbon fibre and the fit is micrometer precise. The dashboard, door panels and Recaro seats are trimmed in exquisite woven leather, while the radio makes way for a wireless charger and Bluetooth speakers. Simply attach your phone via the hidden magnets for instant maps and music. 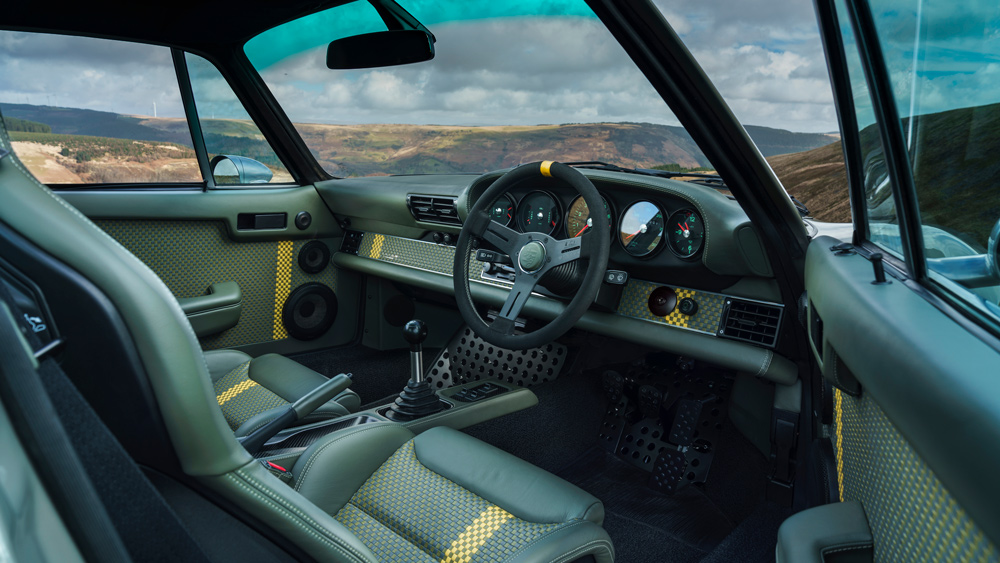 All interior panels are Formula 1–grade carbon fiber, while the dash, door panels and Recaro seats are trimmed in woven leather. Photo by Dean Smith, courtesy of Theon Design.

The greatest visual treat awaits when you lift the engine lid. Theon offers a range of power plants. These range from the standard six-cylinder engines with 285 hp and 3.6-litres of displacement to 400 hp 4.0-liter versions with an RS crank. The example I’m in has the middling 371 hp 3.8-litre, which breathes through individual throttle bodies and drives the rear Michelins via a six-speed manual gearbox from a 993. Shrouded in carbon fibre, without a plastic part in sight, it looks show-car sensational. Even the fuel filter is trimmed in khaki leather.

The flat-six fires with a gruff growl, then settles to a breathy idle. Trademark 911 traits, such as the upright windscreen and offset, floor-hinged pedals, are still present, but the electric power steering feels light and the manual stick glides smoothly across the gate. For anyone used to the “stirring gravel” 915 transmission in classic 911s, it’s a revelation. 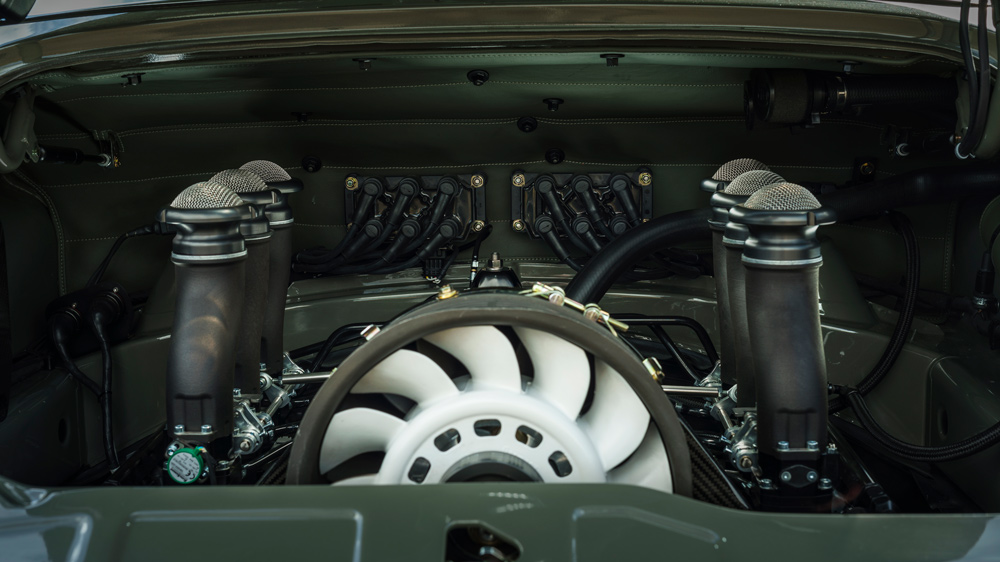 With 300 ft lbs of torque and a curb weight of 2,751 pounds, the car is quick enough to worry a new 992 Carrera. Its engine is turbine-smooth and hungry for revs, surging towards the 6,900 rpm cutoff with an exultant bellow. Then Hawley twists a repurposed fog light switch, the exhaust baffles open and conversation stops as the roar becomes fuller and fiercer. It gives me goosebumps; no modern turbocharged motor sounds like this.

If the KW Variant 3 coilover suspension is rather abrupt in the city, the payoff is unflinching focus at speed. Theon has relocated the AC and power steering pumps to the leather-lined “frunk,” which improves weight distribution to 43:57, making the chassis less spiky and better balanced. It feels fit-for-purpose, yet brimful of abundant feedback, like an older 911 with the rough edges smoothed off. 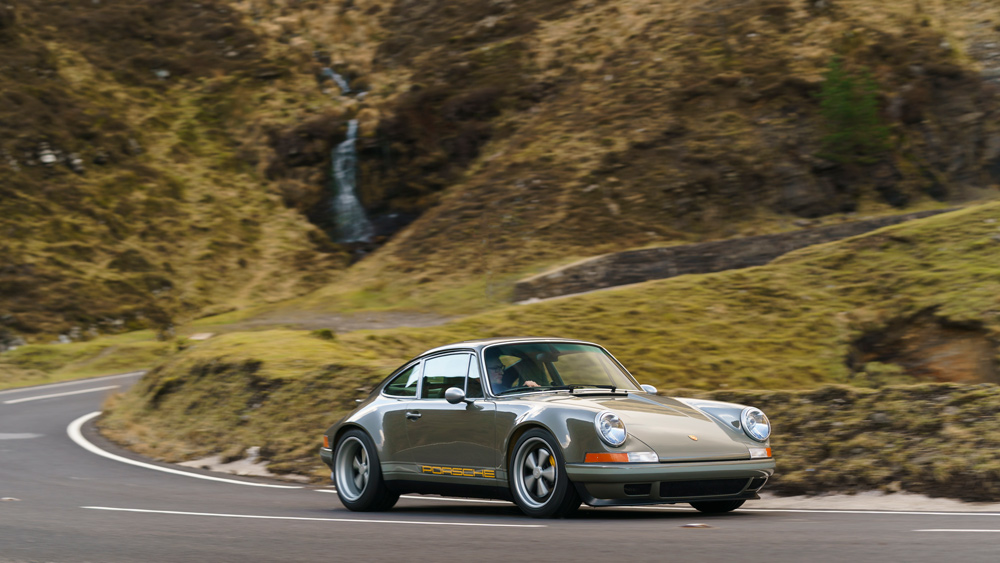 The car’s engine is turbine-smooth and hungry for revs as it surges towards the 6,900 rpm cutoff. Photo by Dean Smith, courtesy of Theon Design.

There’s no Sport mode or launch control, of course, and I’m acutely conscious that this is a fast car without electronic stability aids. Yet I’m undeniably more immersed in the driving experience as a result. I should also mention the 911’s compact size and superb all-round visibility: two underrated virtues in any sports car. By chance, I have a McLaren 620R—a full-on road racer—for the journey home, but it’s the 911 that leaves lasting claw-marks on my soul.

New developments for Theon Design include ceramic brakes and a fully active, computer-controlled suspension setup. Further down the line, there’s also a fresh project based on a different air-cooled 911. “We don’t want to stand still,” says Hawley. From where I’ve been sitting, there seems little chance of that.