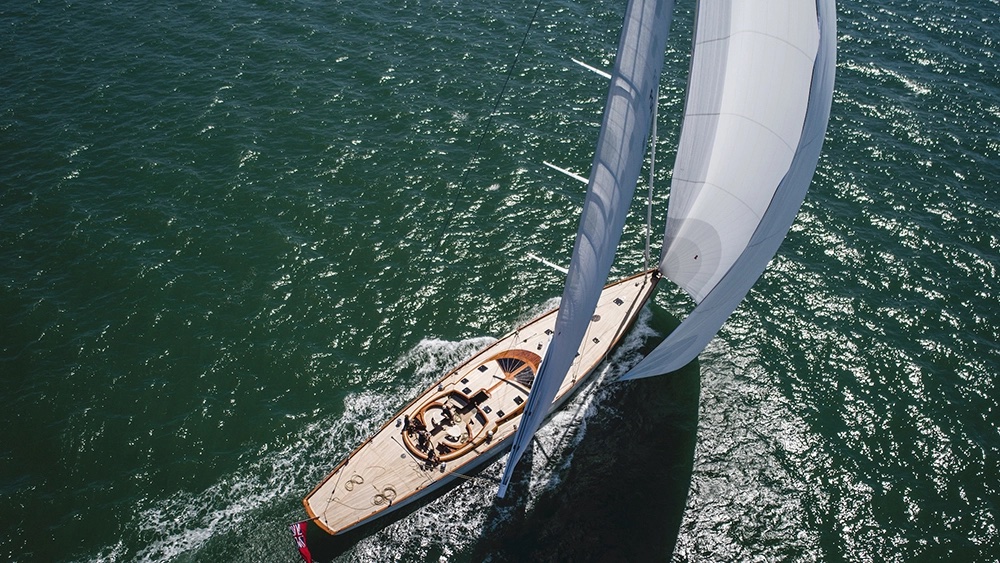 From one of the largest single-masted wooden sailing yachts in the UK to a mahogany 30-footer with an Art Deco–themed interior, this quartet of vessels showcases just what’s possible with timber, the most classic of boatbuilding materials.

The 111-foot Geist, launched last July by Spirit, is the largest single-masted wooden sailing yacht built in the UK since the 1930s, when the America’s Cup yacht Shamrock V ruled the seas. But Geist is much more than a giant sloop. Her eco-conscious owner mandated systems like the first-of-its-kind electric propulsion by Torqeedo—a 100 kw motor fed by BMW lithium-ion battery banks, which recharge while Geist is sailing—while her Rhoades Young interior elevates wood to its maximum potential, showing off sustainably sourced sipo mahogany, teak and walnut in a series of continuously flowing curves. Even her sails are made of recyclable materials.

Hacker Boat Company traces its roots to John Hacker, who crafted boats for the rich and famous during the Roaring Twenties. The Ticonderoga, N.Y., facility builds modern triple-cockpit runabouts that nonetheless appear straight from the docks of J. D. Rockefeller. The recently launched Restless is a custom project, a modern thoroughbred based on the 1923 Miss APBA race boat; she uses a foot pedal rather than a throttle for acceleration, on her way to a top speed of 65 mph. The Hacker team achieved the striking navy hull by combining a double-planked mahogany layup with a fibreglass skin, while the owners chose the same Cuoio leather favoured by Ferrari to pair with the boat’s mahogany topsides.

Jakob Boesch built his first boat in the 1890s, and more than a century later his family continues to merge new technologies with old-world Swiss craftsmanship. Boesch’s new, 28-foot 860 has a classically styled mahogany hull with up to 11 layers of wood laid at right angles, sealed with six layers of epoxy and finished with six layers of varnish. Propulsion choices include modern options like twin 150 kw electric engines for quiet, emissions-free operation. The runabout’s meticulously crafted silhouette disguises a beast of a machine designed for precise handling, tow sports and speed. Equipped with twin 380 hp Ilmor gas engines, the 860 can hit 48 mph, leaving fibreglass towboats in its wake.

Unlike the rest of the list, the Hood 57 LM isn’t a proper wooden boat. The hull is what manufacturer Lyman-Morse calls “wood composite,” a combination of strip-planked fir and fibreglass, though its 1950s New England look—including the superstructure’s teak veneer—and pioneering construction suggest the potential for a modern-retro segment; it offers high-tech features such as a carbon-fibre flybridge roof and electric windows. A tough, lightweight boat designed to run offshore, its twin 1350 Volvo IPS pod drives deliver a top speed of 43 mph, while the interior, with its open salon and two generous staterooms, is as spacious as any fibreglass competitor.