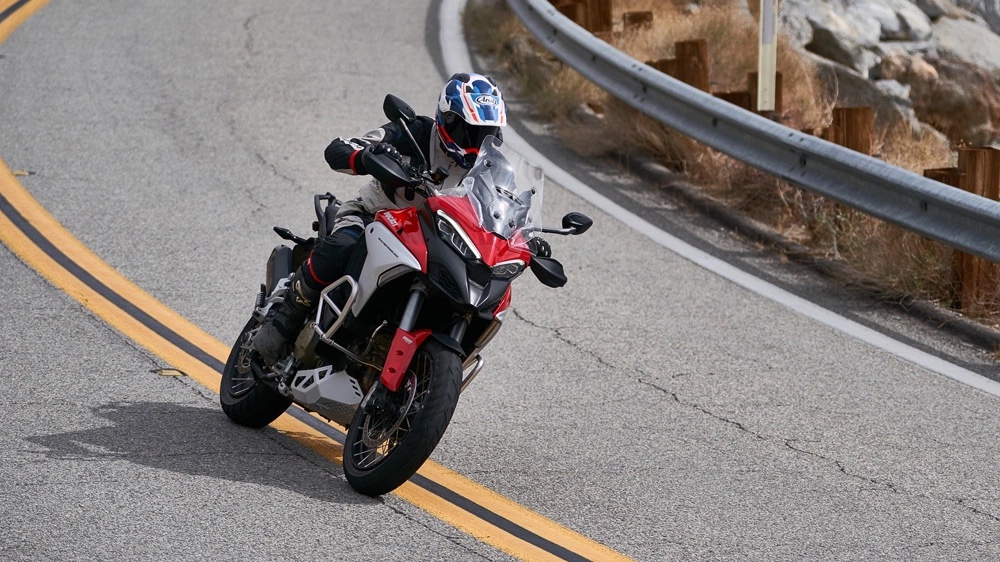 Motorcycles have changed forever thanks to the 2021 Ducati Multistrada V4 S. We are now entering the age of radar on our rides, with Ducati being the first manufacturer to bring such technology to the public in its Adaptive Cruise Control (ACC) and Blind Spot Detection (BSD) software. Ducati beat everyone else to the punch—an impressive feat when you consider the competition includes its arch rivals BMW and KTM.

Here’s how the ACC works. Just set your cruise control to, say, 75 mph, for example, and the radar distance to perhaps level three (of four), giving you plenty of space to the car in front. As you gradually close the gap on a slower vehicle directly ahead, and get to within a given distance of the bumper, the Ducati slows to match its speed with the one in front and stays there, thanks to radar telling the bike’s ECU to gradually close the throttle bodies and apply a touch of brake pressure. 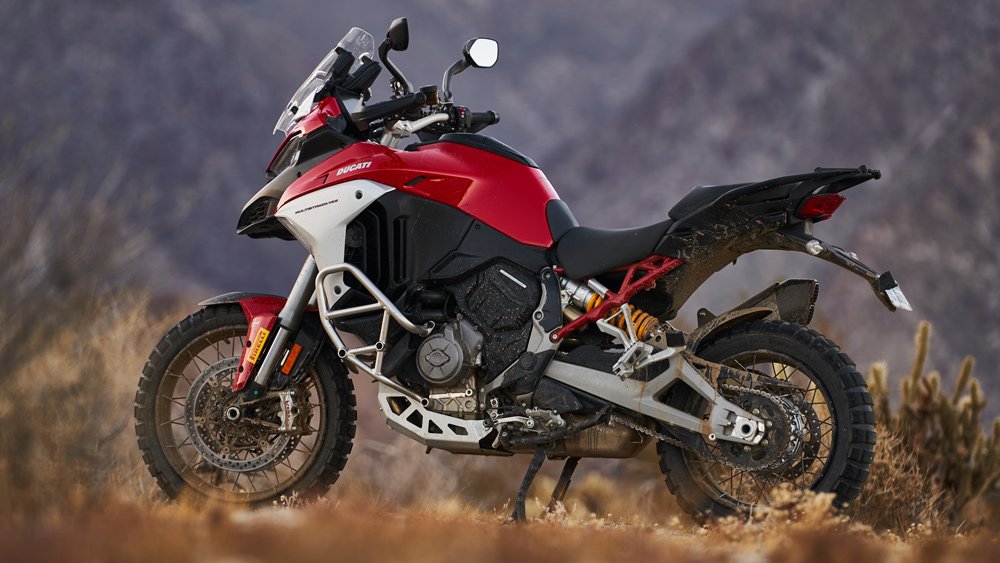 When you decide to pass, turn the Indicator on, move out of the radar’s field of vision and, within three-to-five seconds, the Ducati starts accelerating with no extra throttle input, bringing you back to your chosen cruise control speed. It’s a surreal experience to sit on a motorcycle that’s increasing and decreasing speed with no input from the rider, and it takes a leap of faith to get used to, believe me. However, once you do, you’ll never look at freeway riding the same again.

The second arrow in the new Multistrada’s quiver is its BSD software. The system works via the rear radar—set above the back number plate—which sends a signal to the ECU to alert the rider that a vehicle is in the blind spot. This notification comes by way of yellow LED lights integrated into the corners of the mirrors, just as with the latest automobiles. 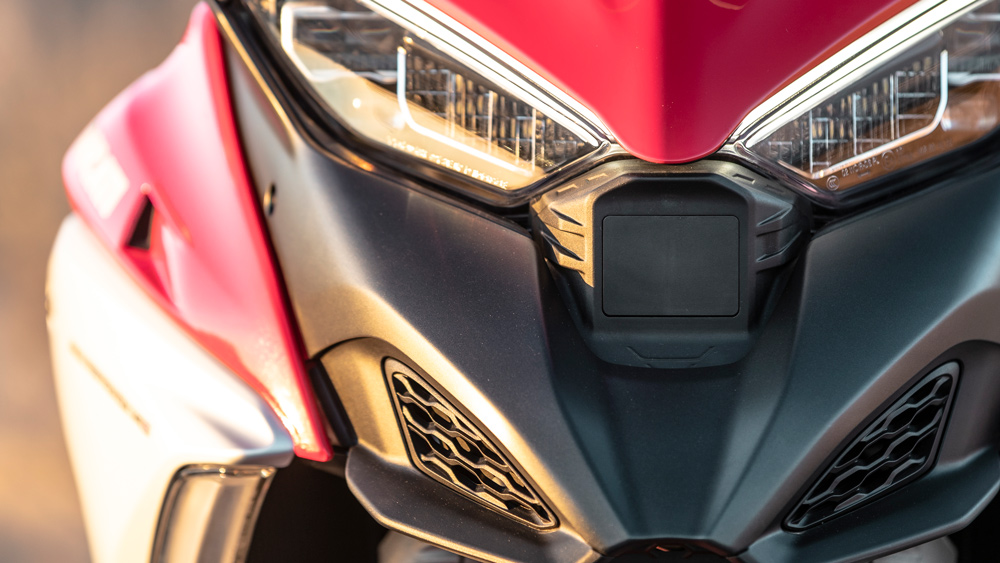 The nose of the bike houses one of the cutting-edge radar components. Photo: Courtesy of Ducati Motor Holding S.p.A.

With the BSD system, if your indicator is on but you are not completely clear to change lanes, the light will flash extremely quickly, giving you fair warning. No doubt, both systems will be commonplace on bikes in the coming years.

Mission control for the Multistrada has been completely overhauled. The new 6.5 inch TFT display holds numerous settings for every conceivable assist—traction control, wheelie control and ABS, just to name a few. It’s all accessed by the joystick on the handlebar, making adjustments far safer and easier to execute than in the L-twin days. 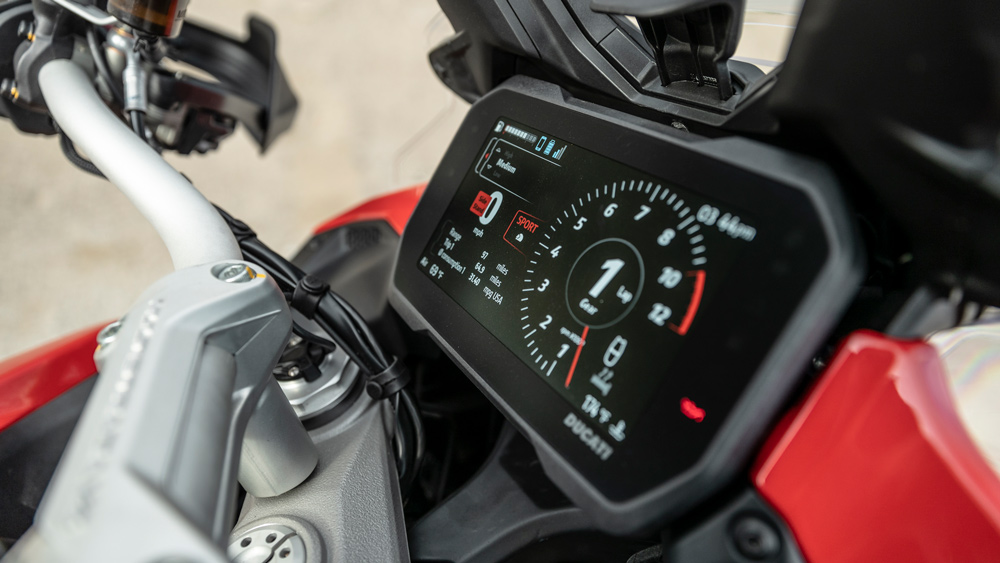 But safe as the Multistrada is now, it wouldn’t be a high-end Ducati if it didn’t have the ability to get the adrenaline revved-up, and under the restyled bodywork sits a monolithic 1,158 cc V4 motor. Given a two-millimetre bore increase, and now running conventional valve springs instead of the traditional Desmodromic valve train Ducati is famous for, the Multistrada V4 S possesses a claimed 170 hp (at 10,500 rpm) and 92 ft lbs of torque (at 8,750 rpm). Ducati touts that third gear roll-ons at 62 mph showed the motor producing 25 percent more torque than the outgoing 1,262 cc L-twin.

The acceleration is nothing short of intense, especially when you consider the model’s designation as a sport tourer. The Multistrada’s performance would leave superbikes of five years ago in its dust, and do it with the kind of comfort more akin to long-haul cruisers. And those conventional valves are the reason Ducati can offer an incredible 36,000 miles between valve services, more than any production motorcycle available today. 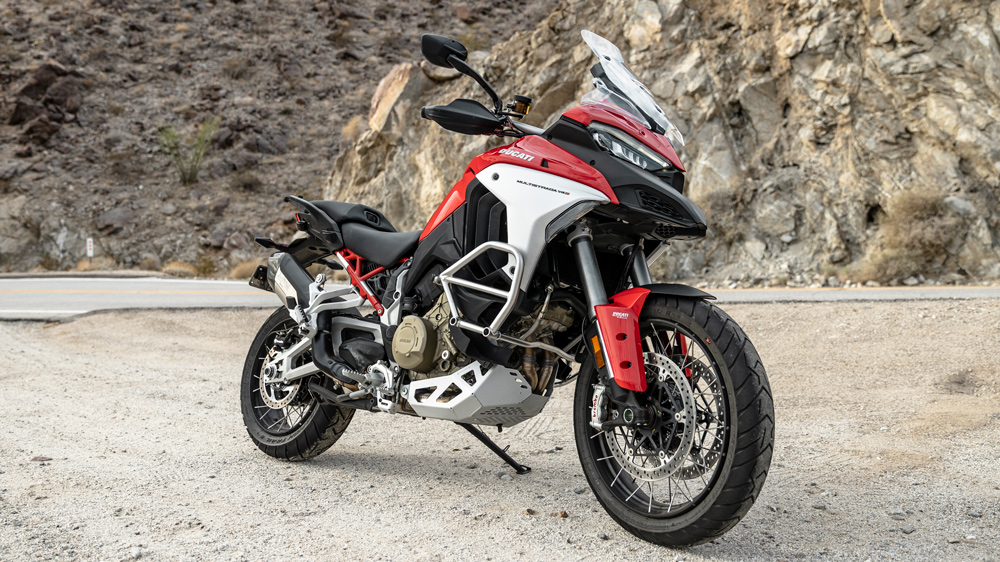 The motor is mated to the usual four ECU modes of Sport, Touring, Urban and Enduro, the latter of which limits the V4’s output to 100 hp but makes off-roading a pleasure for such a big machine. With a purported curb weight of 530 pounds, the bike may seem rather big to take on unpaved terrain, yet the Enduro throttle and suspension settings make the Multistrada easier to handle than expected. Helping in that department is the fact that the model now comes with a 19-inch front wheel as standard, along with the 17-incher out the back, which gives it similar tire sizes to BMW’s all-conquering R 1250 GS. It also lets the Multistrada wear tires such as the Pirelli Scorpion Rally for stout all-terrain performance. 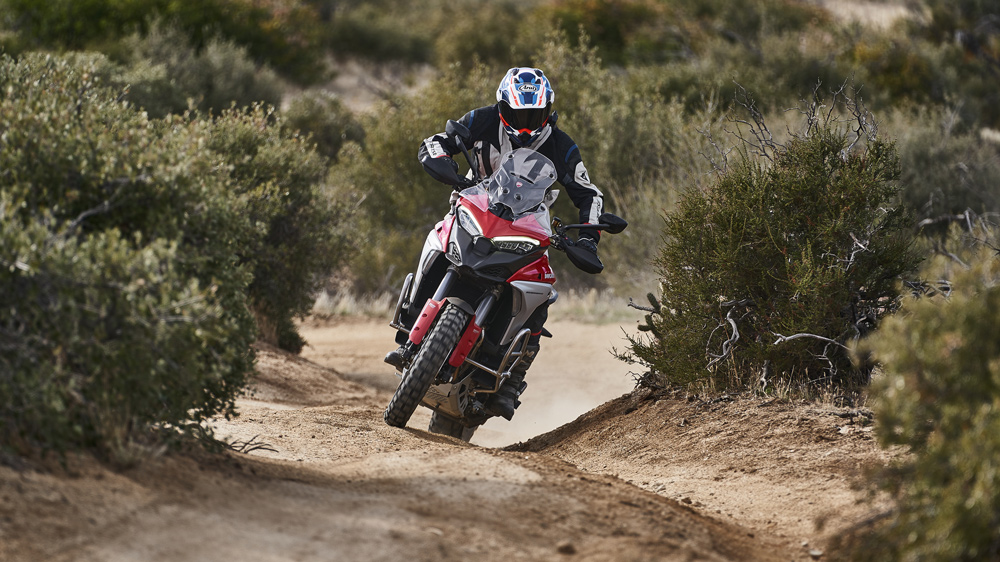 The Enduro ride mode’s throttle and suspension settings make the Multistrada easier to handle off-road than a 530-pound bike should be. Photo by Gregor Halenda, courtesy of Ducati Motor Holding S.p.A.

As for the suspension and brakes, the V4 S uses a 50 mm Marzocchi fork and monoshock paired with the Ducati Skyhook Suspension Evolution algorithm for semi-active adjustment. The ride can be programmed to be as stiff or as cushy as you like, making the Multistrada a real chameleon.

Braking is taken care of by superbike-spec Brembo Stylema calipers griping 330 mm discs, with the added safety net of Cornering ABS, which is absolutely all the braking you need for the street, and very nearly too much for trails when the surface becomes slippery. 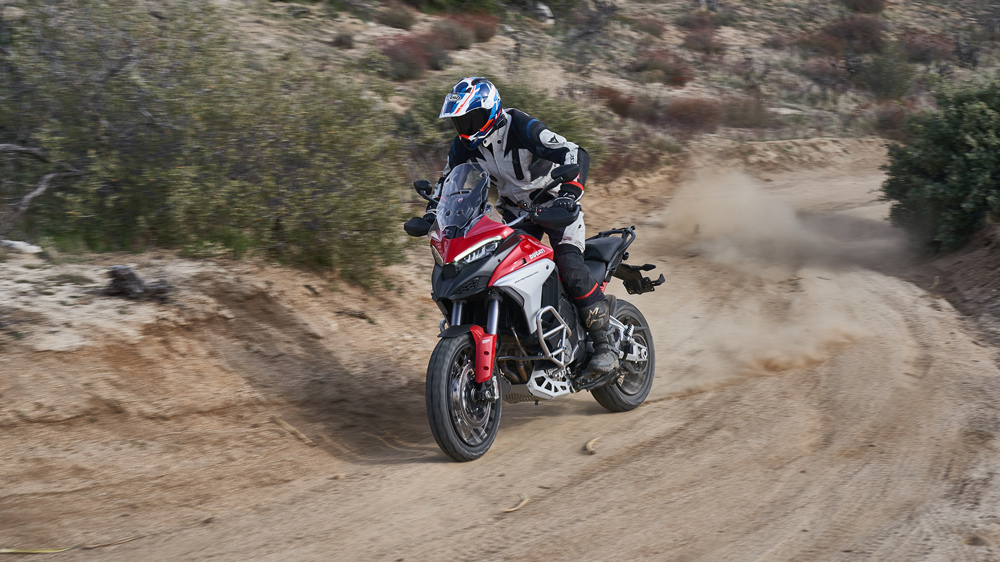 As impressive as the rest of the bike is, however, it all seems to take a backseat to the radar and its implications for the production market. Ducati says this is the finest machine it has ever created, and I can’t seem to argue that point after spending time on it. In fact, I venture that the 2021 Ducati Multistrada V4 S marks a watershed moment, not just for Ducati, but the motorcycle in general.