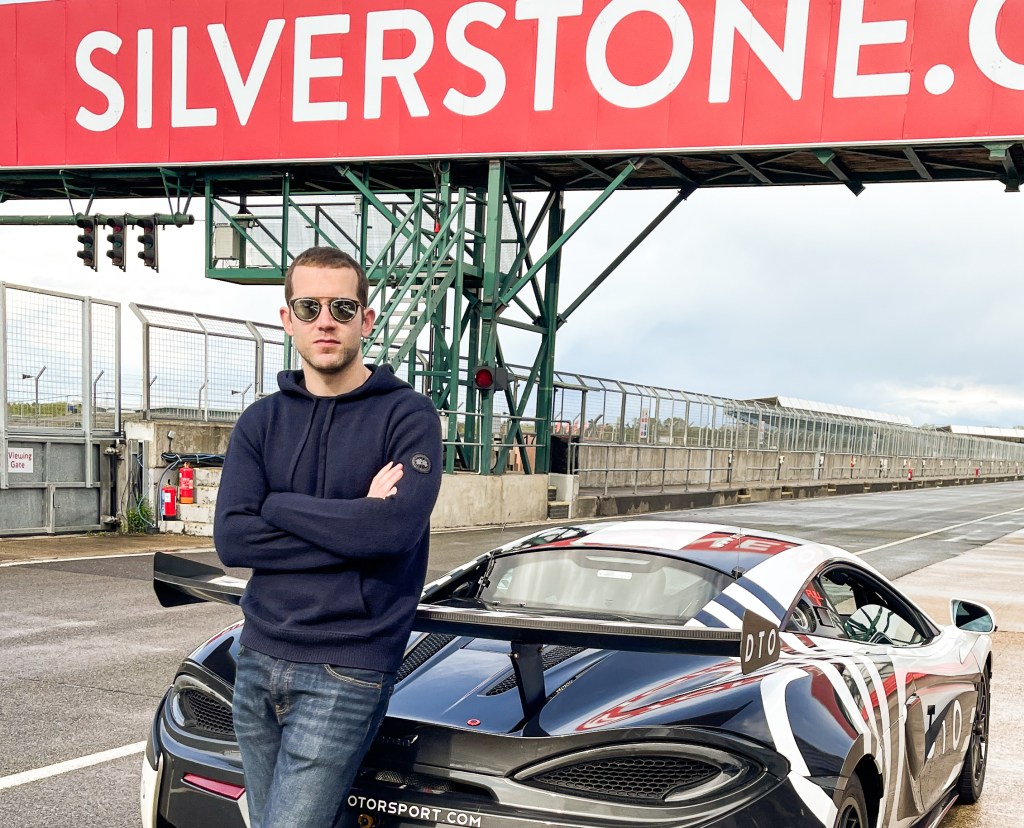 Is it an exaggeration to say that all boys dream of being racing drivers? I think there’s certainly a chapter at some point, for all of us of a vehicular disposition, where the thought enters our minds. If it’s at the age of seven, thanks to an encouraging parent, you may end up Lewis Hamilton – if it’s in your mid-30s, a decade into a rather committed acting career, then the chances may be a little slimmer.

I’ve always loved cars. Ever since my father took me and my brother to The Motor Show in London as kids, I’ve been hooked. I dreamt, like any wide-eyed young lad, of driving a Ferrari, seeing a Lamborghini up close or opening a gullwing door on, well, anything really. Over the last few years, I’ve ticked all those boxes, of course, but also realised that to be a true petrolhead – to really say you know how to drive – you need to do it on a track. Schumacher, Senna and Moss didn’t become household names because of how quickly they got from Luton to Leeds on the M1, or their ability to parallel park in Hackney. They did it by taking a car to its limits at Silverstone or mesmerising crowds in Monaco.

How, then, does one go about getting on a track? How do I somehow catch up on years distracted by treading the West End boards and filming a (globally recognised I may add) TV show? This is where driver training outfit DTO Motorsport come in. There are plenty of ways to get hold of a rickety Mazda MX5 and stand in the wind, clinging on to a cold bacon sarnie before thrashing it around a track. Sadly, I’ve passed the point where I don’t mind inclement weather or low-quality coffee – put it down to too many years being pampered as an actor – not to mention the fact that I am about 20 years behind on my driver tuition journey. This is why the very attractive and complete service that DTO provide is so appealing.

For the aspiring Alonso, new McLaren owner or CEO looking to give his team a serious day out, DTO Motorsport provide something, as far as I’m aware, no one else is doing. Think one-on-one tuition with genuine racing drivers in high-end, track-focussed cars, surrounded by the kind of hospitality you’d expect at the VIP section of Glastonbury or Goodwood.

DTO have now set up a permanent base at Silverstone, which suits me – if you’re going to drive anywhere it should be here. As I made my approach along the numerous garages on the National Pit Lane, I glimpsed silver-haired men crouching around Caterhams clutching large flasks, tweaking engines and discussing how best to take Maggotts or Becketts. It’s a wonderful atmosphere for any petrolhead, and as I stepped into DTO’s garage that atmosphere was just as palpable – but elevated by the wave of warmth from an industrial collection of heaters and background music from the in-house DJ. But don’t worry, having a DJ doesn’t mean it’s an Ibiza beach party in there – the focus is very much on the track.

Before anything else, DTO introduce you to your personal racing coach, someone who will be with you throughout the day, and this is really at the heart of their product. It’s about racing, it’s about the track and it’s about your development. The nice food, snacks, music and sofas are all there to support that – not replace it. I was partnered up with Phil Glew – a professional racing driver who now runs his own management team and coaches young drivers. To claim he knows what he’s talking about is like saying Steve Jobs was handy with a laptop. A fresh coffee was thrust into my hand in a mug with my name on it, and I was left in Phil’s capable hands.

After a few pleasantries he was keen to introduce me to the real heart of the DTO garage: the cars. This is where DTO really show their true colours as well as their priorities.  Don’t be fooled into thinking this is one of those simple Red Letter Days-style packages, where you throw an Aston Martin Vantage or Lamborghini Huracan around a series of cones in a car park. We’ve all done those – they’re a hoot, don’t get me wrong, but those cars are the equivalent of a camel ride in the Dubai desert: poor beasts forced to trot around in a circle whilst an over-weight American tourist laden with more cameras than Mario Testino smiles to his sunburnt wife.

DTO’s unbelievable collection of 10 cars is focused on track ability and driver progression. There is a clear upward development from car to car, as you gradually lose familiar features in favour of roll cages and downforce. Phil took me through that day’s line-up of six cars with passion and knowledge, from the BMW M140i up to the full-on track special McLaren 570 GT4 racing car. (That one, he pertinently added, I would not be driving. Sad face. But he’d take me out for a hot lap. Scared face.)

As an army marches on its stomach, and battle would shortly commence, we were served lunch. Definitely not a cold bacon sarnie in sight. Caterers Bonnie May provided beautifully presented lunch boxes for us with delicate salads, a delicious wrap and some decadent dessert – all served with a Fentiman’s Lemonade making me feel like I’d stepped into the Royal Enclosure at Ascot. Well-fed and another coffee drained (I’ve mentioned the coffee a lot, haven’t I? Well, when its good, its good) and it was time to hit the Tarmac.

After a quick helmet fitting, we were set to go. Phil took me for a couple of laps to introduce me to the track and the car, which was welcome as ‘getting lost’ is a genuine danger at Silverstone. It was finally over to me. There’s nothing quite like putting a helmet on and clambering into the driver’s seat in a car, any car, that’s about to go out on a track. They all have proper bucket seats, so you instantly feel that hard but secure cocooning they give you and the natural drama of motor racing. The peripherals are hindered by the helmet, you are strapped into your harness by someone else and you’re given the thumbs up that the pit lane is clear. All these details place you instantly somewhere else – still in a car with four wheels and windows in all the normal places, but definitely somewhere else. Somewhere exciting.

I won’t bore you with a lap-by-lap, corner-by-corner account of my time, but pertinently I didn’t crash and left with all my limbs in the correct sockets. It mustn’t be forgotten that motor racing is still a very dangerous sport. Maybe the most dangerous. Which is why you need to be out there with people you trust and in Mr. Glew I had full faith. Every now and then his hand would quietly appear on my steering wheel and gently, but meaningfully, guide me back onto the right line, or correct a tailspin.

Back in the DTO garage, we sat down at a computer to evaluate our VBox data. This is basically all the high-tech data that has been collected by clever computers and a bank of cameras setup in the car, measuring braking speeds, acceleration, racing lines and much more. We would come back to this data between cars to see what I’ve learned – or not learned as the case may be.

Having warmed up in the little BMW, we moved up through the Porsche Cayman GT4 and onto the BMW M2 CS Racing – I was told on many occasions that there were only two in the country, and DTO have them both. (Proud parents, more than braggers, I think.) I found the Beemer to be a real handful and a full-blooded race experience. I could barely see out of it at times – it was brutally quick and with slicks on and a glimmer of rain became a little twitchy in the corners. But did I love it? One hundred percent. I felt this car to be a real triumph for DTO as, to a layman, it’s so tangibly a racing car. Its feel, its look, its challenge to drive – all these elements combined make for a truly immersive and evocative racing experience. Consider me hooked.

My driving journey finished in the stunning McLaren 720S APEX – I’ve actually driven one of these before but in a far more measured context, so was keen to see what it could really do. It’s just such a beautiful car, it feels rude to be wrapping it around apexes and slamming on the brakes as late as possible. But I was quickly reminded that this is what it was designed to do, and it does it so well.

Finally, I was treated to a demonstration by Phil of what I had been trying to achieve all day. The ‘hot lap’ in the McLaren 570 GT4 embodied what DTO is all about – a truly competitive racing car being thrashed around a world-famous racetrack by someone so capable that he could explain to me exactly what he was doing with the car, whilst he was doing it.

Crawling out of the cockpit of the McLaren and hoping my organs would go back to where they came from, I took in the DTO garage one more time – before grabbing my personalised mug and heading to my parked car.

So, if you’re looking for a way into racing, or for a corporate day out that is a step above 18 holes at Gleneagles or a yacht for the day, then look up DTO. Who knows, you may find your calling?