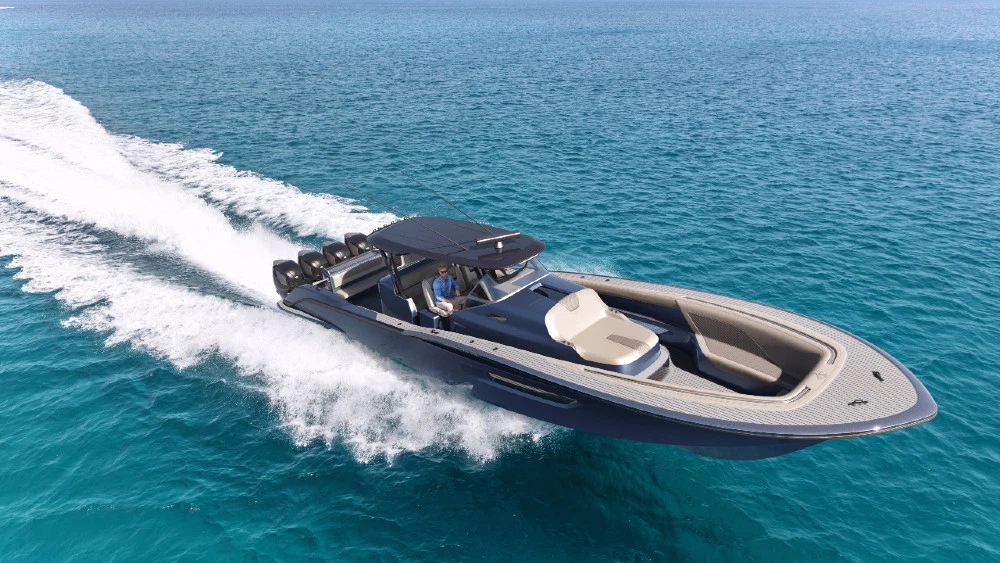 Two of the most iconic names in boating and car design have collaborated on a one-of-a-kind 46-foot centre console that will be announced in February. Robb Report was given the first look.

At first blush, the brand names Buddy Davis, renowned for its Carolina offshore sportfishing boats, and Pininfarina, the designer for Ferrari and multiple luxury car brands, don’t look like they should be mentioned in the same sentence. But the new Buddy Davis 46 Center Console is a blending of cultures, with its deep-V hull and softly curving topsides.

The Italian firm has created designs for the world’s most iconic car manufacturers beyond Ferrari, including Alfa Romeo, Rolls-Royce, Cadillac and even Chevrolet—think the 1963 Corvette Rondine. It has also designed yachts for Princess, Wally, and Rossinavi, three of Europe’s most respected builders. 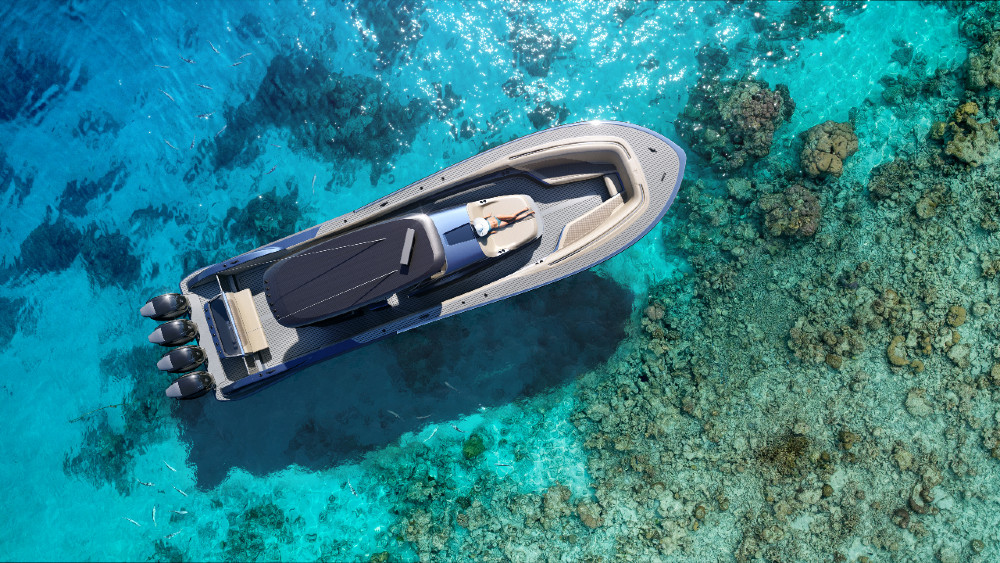 The curves and colours of the new 46-footer are different from any other centre console on the water. Courtesy Pininfarina

But the 41 is Pininfarina’s first design for a US boatbuilder, on a boat type that’s as American as apple pie. The design could’ve been a disaster, Sofia Loren meets The Dukes of Hazzard.

“We’re bringing sexy back into the fishing realm,” Dan Trocki, president of Buddy Davis, told Robb Report. “We purchased the Buddy Davis brand in 2004 and I thought it was the sexiest brand back then. This boat takes it to a whole new level.”

Buddy Davis is an iconic sportfishing name, like Bertram, Hatteras and Viking, but the brand is known for its “Carolina flair,” its curved, upturned bow with instant recognizability, while giving the hull provides an edge when heading offshore into choppy waters when lesser-built boats run back to port. 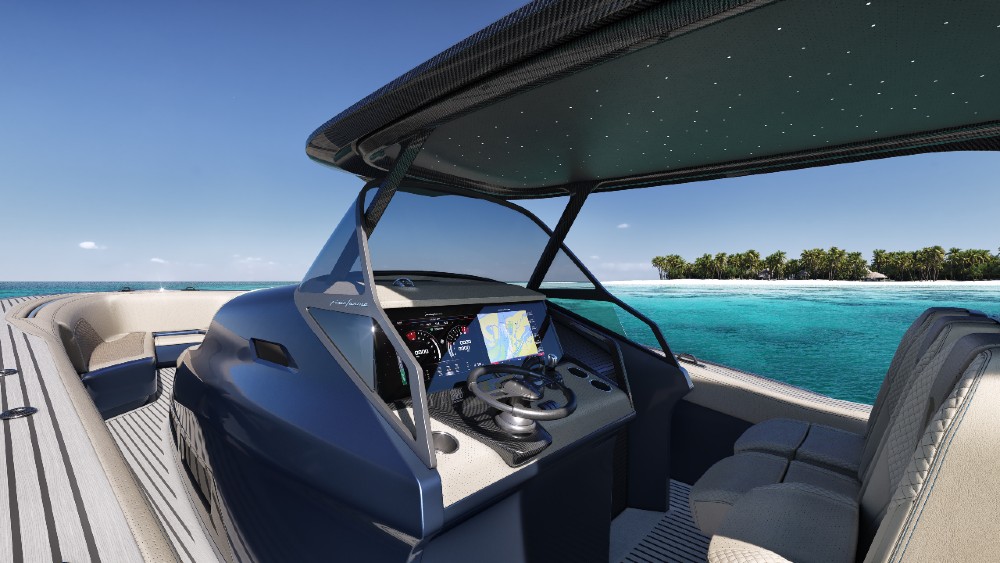 The helm area is stylish, concealing the entrance to the boat’s cabin. Courtesy Pininfarina

The flair still resides on the front of the new 46, but the topside is an entirely different animal. “We realized that it was critical to respect the Buddy Davis brand’s fishing heritage,” Francisco Barboza, lead designer at Pininfarina Extra, told Robb Report. “At the same time, it’s important to think about the Buddy Davis of tomorrow—a balance between entertaining guests and enjoying the sea in a different way.”

Over the last decade, the once-utilitarian centre console has undergone a renaissance from a bare-bones fishing boat to an all-purpose family cruiser that can handle rough waters. Many boaters have downsized from much larger motoryachts, while the centre consoles themselves have gotten larger, from the Scout 530 to the HCB 65 Estrella. Several European brands have jumped into the centre-console game, though their second-hand copies lack the design prowess and offshore self-assurance of their U.S. competitors.

The new Buddy Davis 46, however, could be a new chapter for the boat type. Instead of the straight lines of many centre consoles, this is all curves, from the shape of the hull, through the gunwales, along the topsides. “We used a lot of luxury-automotive touches in this boat,” says Barboza, pointing to the quality of the upholstery, subtle colours, and even a special coating that creates special highlights along the hull to match the upper deck. “People who appreciate cars will really care about those features. They are used to that type of quality and want it to be part of their lives,” says Barboza. 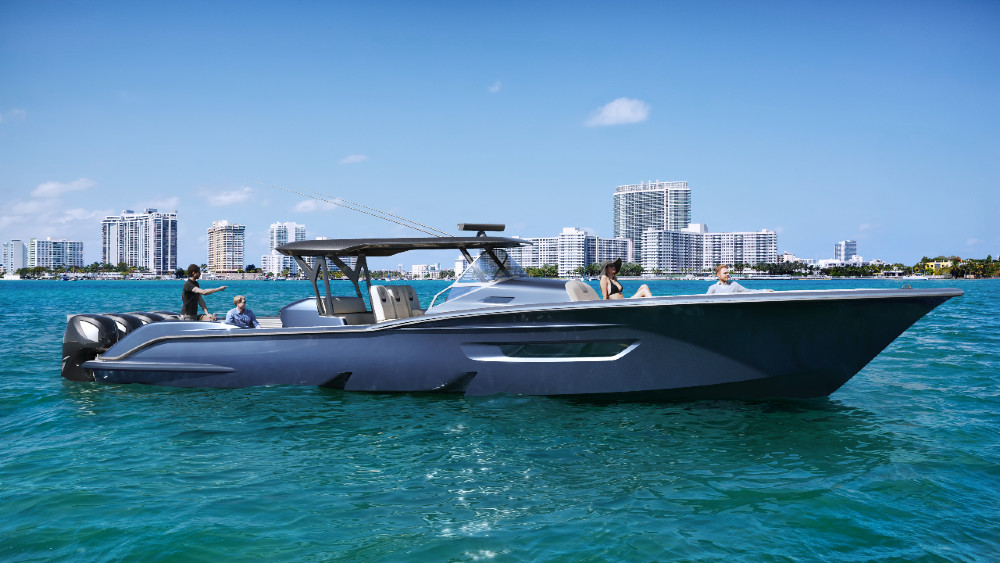 The running surface with twin steps in the center was designed to run fast in rough ocean conditions. Courtesy Pininfarina

Being a Buddy Davis, Trocki’s priority was to make it an exceptional offshore boat. The 46 has the Buddy Davis deep-V hull, with twin steps for speed, with the choice of power being triple 450 hp Mercury Racing outboards or four 300 hp outboards. The boat is expected to have a top speed in the 70-plus mph range. “We’re not just making this beautiful,” he says. “It’s designed to be tough and fast.”

Barboza and his team sweated out the details, making sure its form did not get in the way of the function. “We’re very proud of details, like the way the cabin connects with the helm area, creating a natural flow,” he says. “The cabin was also designed to be soft, to have a welcoming feel that goes beyond sheer functionality. It’s also filled with natural light. It’s challenging to find that kind of space, but we think it’s a real differentiator.”

The boat is also built with rocket launchers and rod-holders in the gunwales, an open rear cockpit, and space up front for a casting platform. In between, the designers managed to add seating for multiple guests. The 46 can be built with fold-out side wings at the transom and other customized features. “We see it as a multipurpose boat, one that could even make a great superyacht tender,” says Trocki. “We paid attention to every small detail to make this a breakout boat.”