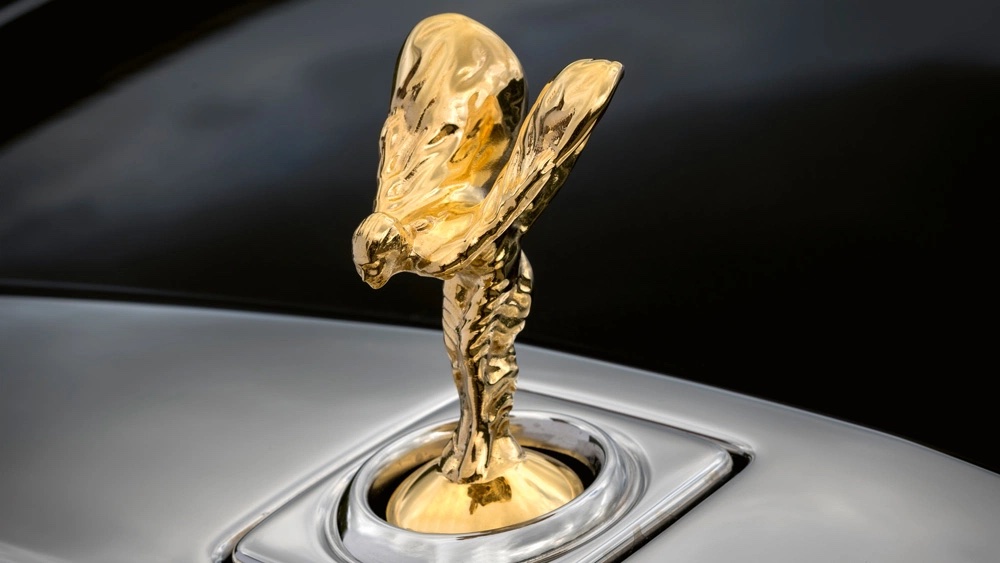 For nearly 115 years Rolls-Royce has been building automobiles for the world’s royalty and glitterati, driven by co-founder Sir Henry Royce’s missive, “Take the best that exists and make it better.” Now, a new book on the revered marque attempts to follow the same approach.

Rolls-Royce Motor Cars: Making a Legend, published by ACC Art Books, doesn’t just tell the history of a company that’s become synonymous with power, affluence, and success; instead, it showcases the numerous artisans behind the vehicles, “the ordinary men and women who make the world’s most extraordinary motor cars.” 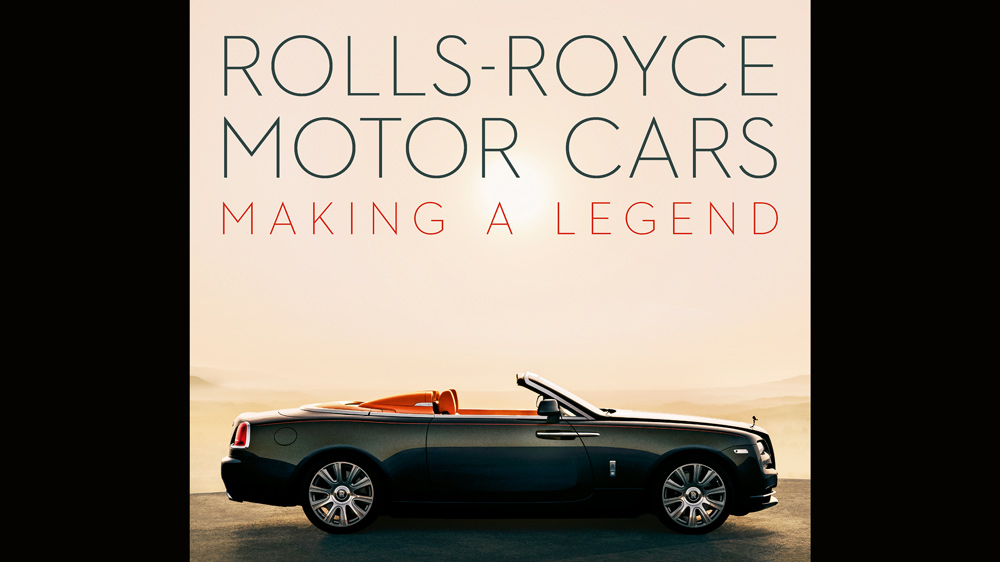 Although Rolls-Royce cooperated fully on the 295-page coffee-table book ($65), the idea was developed by Emmy-winning automotive journalist Harvey Briggs and novelist Simon Van Booy. Recently, Briggs shared with Robb Report how the project came about, the idea behind its specific focus, and what he hopes readers will take away from it all. 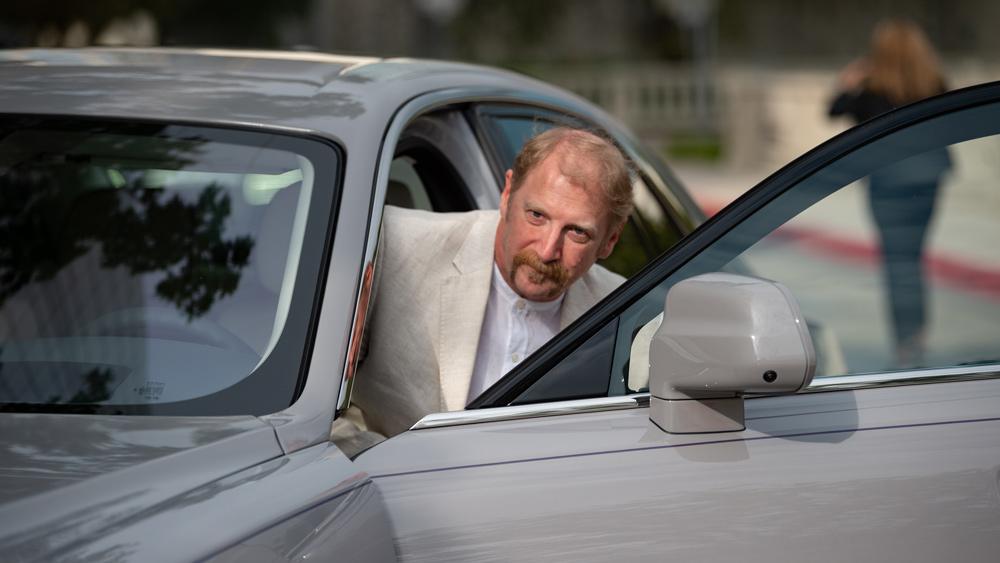 What was your first experience with Rolls-Royce?

I grew up in Detroit around the automotive business—my dad worked at Ford—and I’ve always been a car nut. I was an intern at Car and Driver when I was in college and had a little bit of exposure to Rolls-Royce then, but was never allowed to drive one. Getting back into automotive journalism after 25 years in marketing, I was writing for a friend’s luxury lifestyle website and Rolls-Royce reached out to me for the new Wraith launch in 2013. That was the first time I was able to drive one, and it was a spectacular car. And now I’ve driven everything, multiple variations of the product over the years. You don’t realize how good, and how different, a Rolls-Royce is until you get behind the wheel. 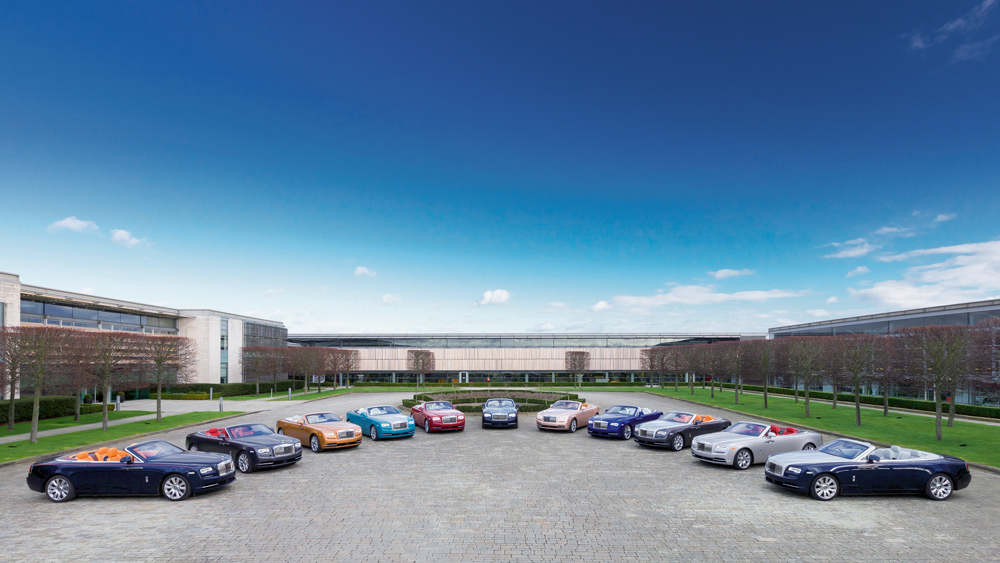 How did the idea for the book come about?

You know how these things happen; there’s some serendipity involved. My co-author, Simon Van Booy, and I had been introduced by a friend who runs an independent bookstore, and Simon began writing some for my website Rides & Drives. We wanted to figure out a bigger project to do together. Shortly after, Simon got a call from a publisher who wanted to do a book on Rolls-Royce, as they already had books on Porsche, Lamborghini and others. Simon mentioned he’d “have to get Harvey involved, because he knows everybody at Rolls-Royce and can get us inside.”

Simon and I looked at all the Rolls-Royce books that have been done and said, “We don’t want to do that.” There have been a lot of books on the history, a lot of books done on the original founders. We wanted to do something more contemporary. We threw six ideas at the publisher, and this was the one that everyone seemed to resonate around, getting to know not just how the cars are made, but who makes them. 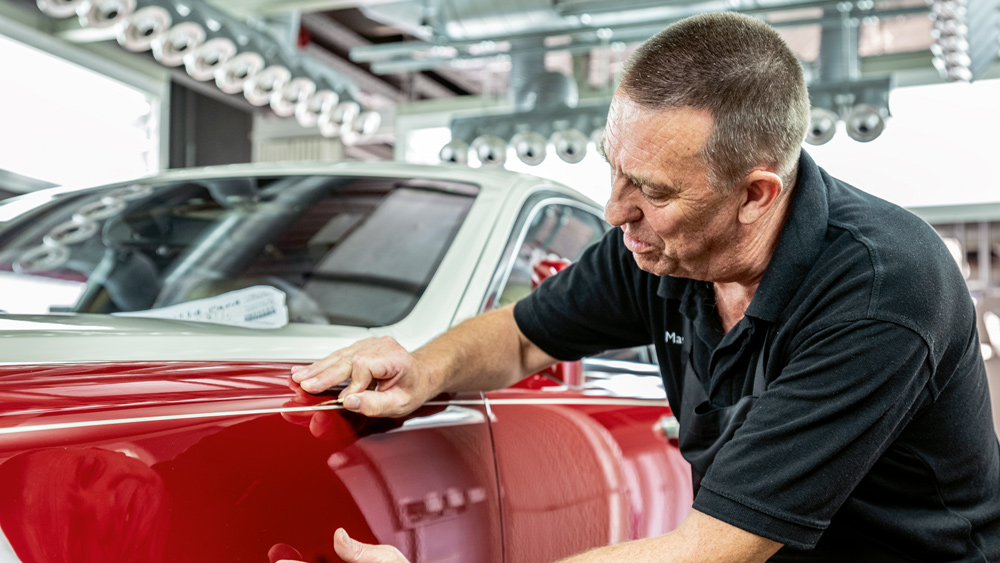 When did the project gain momentum?

We had the idea, but then had to sell it to Rolls-Royce because we needed access. This was right around the time of the Cullinan’s debut. At the launch, the briefing room had pictures of the craftspeople all over, and I brought up the idea with [Rolls-Royce’s director of Global Communications] Richard Carter and the next day we sat down and hammered out the details. They opened up the whole factory to us, there was no place we couldn’t go and nobody we couldn’t talk to. 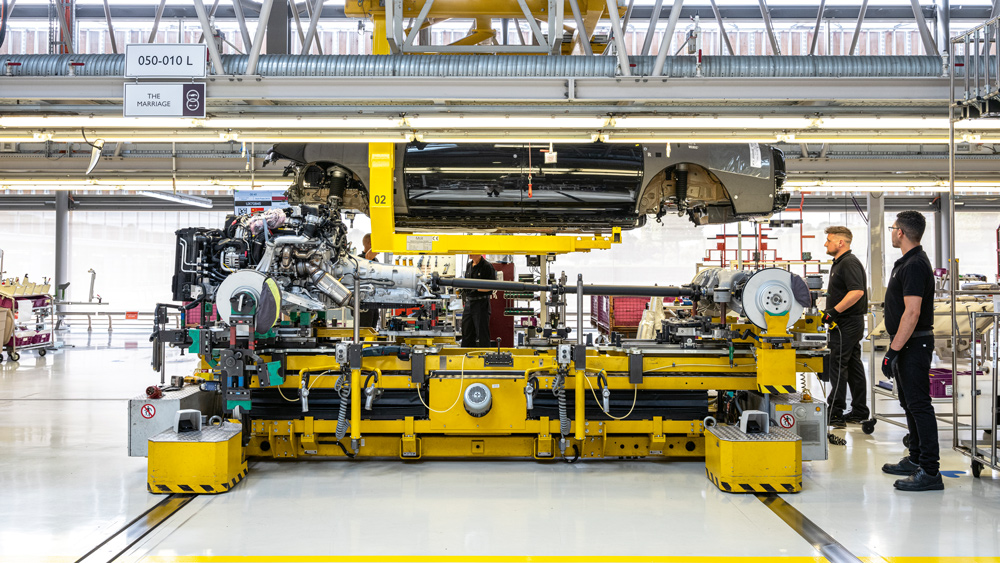 Marrying the drivetrain to the chassis. Photo: Courtesy of Rolls-Royce Motor Cars Limited.

Describe the thought process behind the book’s structure.

Since we wanted to celebrate the people who make the cars, the best way to present that was for us to walk people through the process of how a car goes from being a customer idea to a finished product rolling out the door. We wanted to use the individuals involved to tell that story. It began with interviewing the designers about their relationships with customers, and that process is just fascinating because almost every car is customised in some way. And then we interviewed people from every department. The goal was to really connect the people who read the book with the people who make the cars. It celebrates everybody, from the guy who tightens the bolts on the carriage to the designers who come up with these crazy ideas. 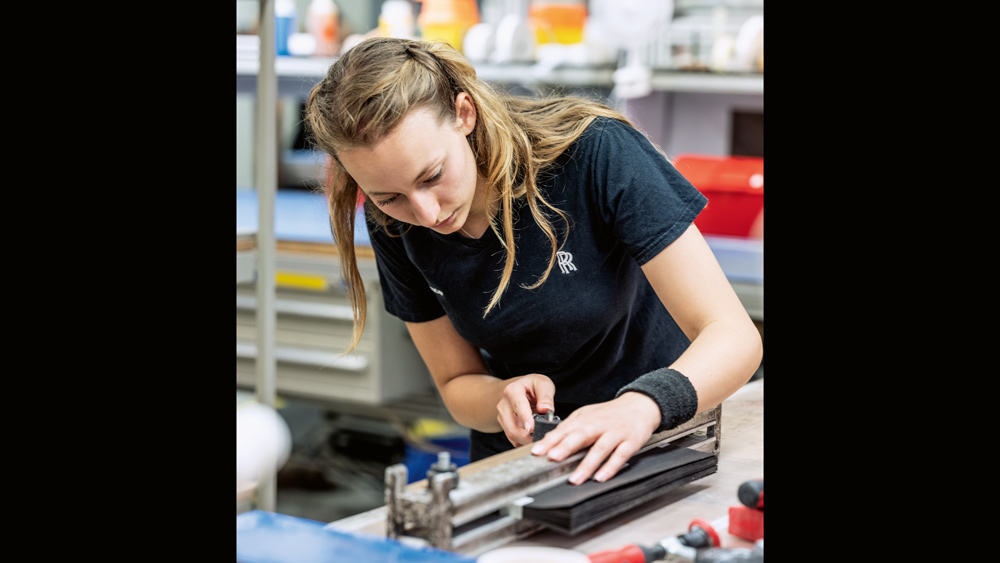 What were the greatest challenges encountered?

The other challenge is just the logistics of making sure you have everything together and every detail is right. One of the things we did for all the archival photos was go over to the International Club for Rolls-Royce & Bentley Enthusiasts, which is a separate entity. They have build sheets of every Rolls-Royce ever produced. So if you buy a [classic] Rolls-Royce, and you’ve got the chassis number, you can go in there and pull the sheet and see exactly what material was used, what color it was, the features, all that. So if you want to restore it, that information exists. They have a whole photo room with some images that have never been seen. We spent two or three days there, going through old photographs and talking to historians. 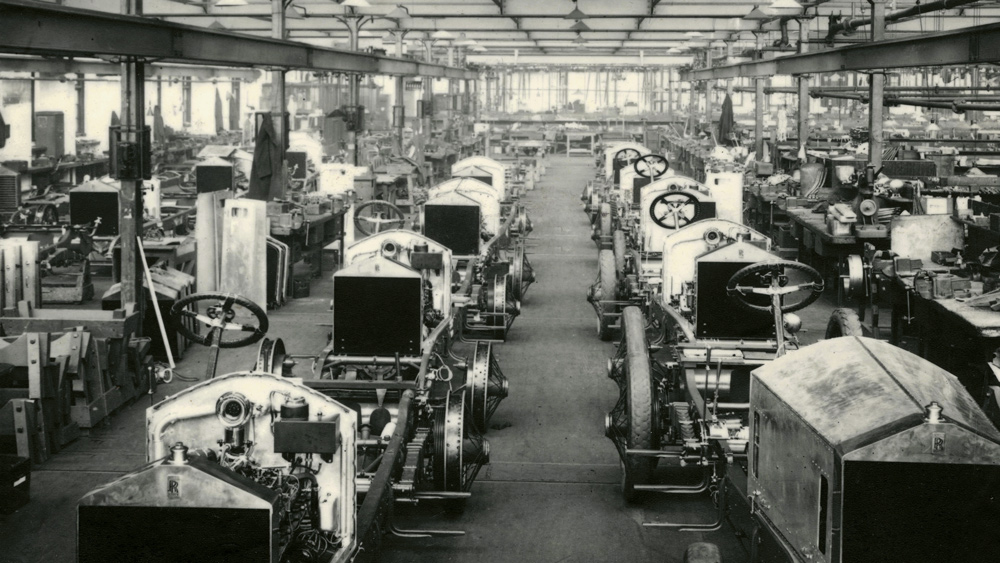 Production of the Rolls-Royce 40/50 model at the Derby plant in the early 1900s. Photo: Courtesy of Rolls-Royce Motor Cars Limited.

Were there any big surprises from your tour of the factory at Goodwood?

There were a couple of surprises. First, just how much handwork is done, even in the assembly process. Where some manufacturers have machines to tighten all the bots, here there’s somebody hand-tightening them. But they’re using technology to support that, like the torque wrenches are all Wi-Fi connected so they know it was torqued to the right spec and put in at the right angle, but it’s still done by hand.

The other things that surprised me were how much innovation is going into these cars and the leaps and bounds taken in terms of commitment to delivering impeccable quality. That’s seen in the aluminium mock-up frame that’s built to scale and perfectly machined to be the ideal form [of the model]. It’s used to test every part and costs almost three-quarters-of-a-million pounds. 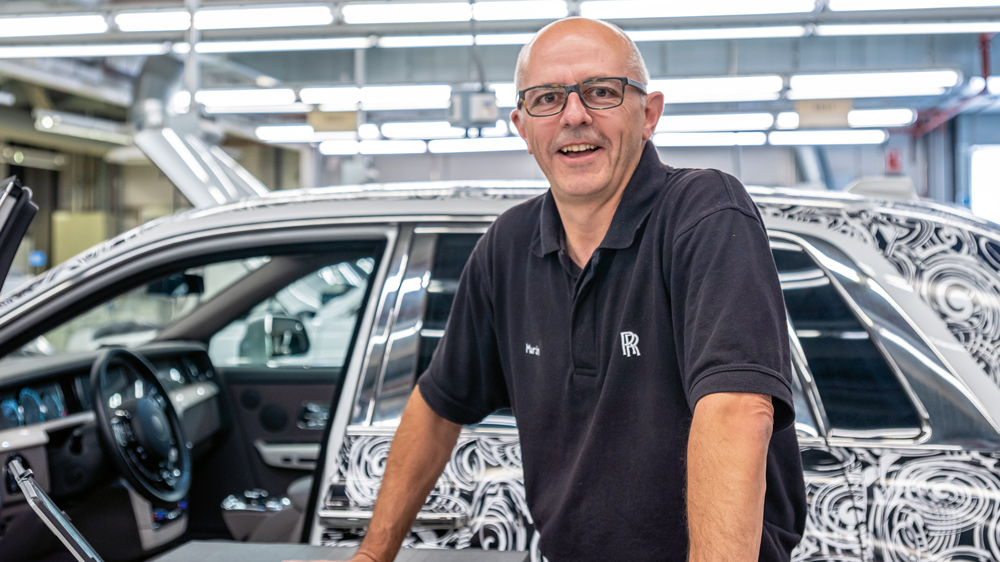 Is there an individual’s story that stands out to you?

There was a young woman, maybe 25 or 26 years old, in the leather shop. I asked her how she got there and she mentioned she had been a lost teenager who had no idea what she wanted to do with her life, but she loved to sew. Someone suggested the internship program to her and she got accepted. Rolls-Royce trained her, put her through university as part of the programme, and now she leads a team of five or six people in her division.

What do you hope the book accomplishes?

Everybody looks at Rolls-Royce and sees this luxurious status symbol. To some people, it’s a wonderful thing, and to others it’s a symbol of gross excess. But when you start to see the people behind it, and the passion and pride they have for their jobs, it really changes the perception of the car. And Rolls-Royce customers are almost patrons of an art form. These crafts, these skills, would probably disappear at that level without them. That’s what I want this story to tell: how this business and those artisans come together.