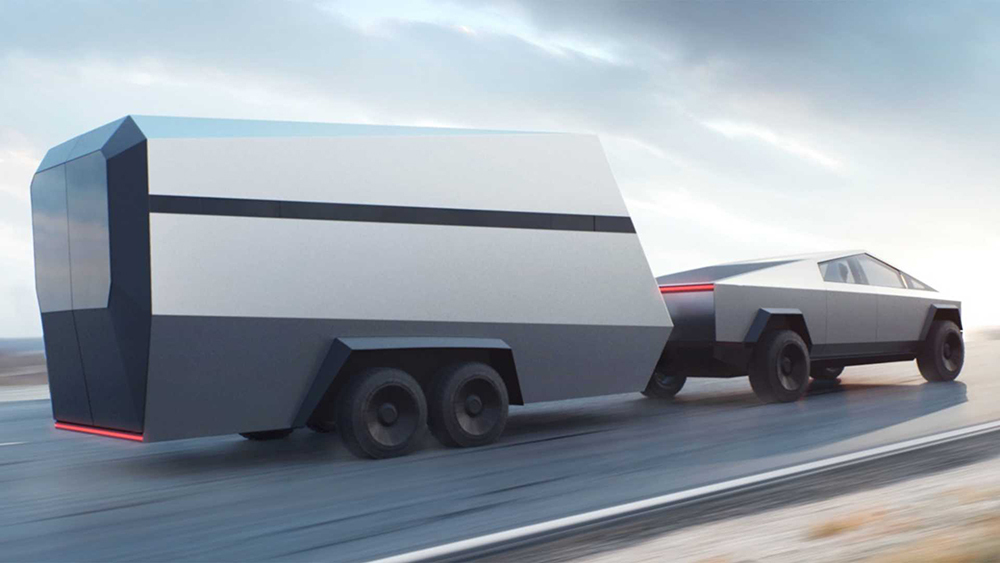 It’s been a few weeks since Elon Musk shattered expectations with his polarising polygonal Cybertruck, and the shocks keep coming: The Tesla CEO has revealed there’s a new ultra-tough trailer in the works, as well as another Cybertruck configuration designed specifically for camping.

Musk said that Tesla is planning a “sick attachment for the Cybertruck,” according to Electrek, and the marque subsequently released a new render of the electric pickup truck with its own trailer. As you would expect, the Cybertruck’s singular “monoplane” design extends to the trailer—it’s just as curve averse and looks like a Cubist’s take on an Airstream. It’s just an exterior rendering, so both layout and interior features remain a mystery—for now, at least.

During the Cybertruck reveal, Musk went to great lengths to highlight the Cybertruck’s lofty towing capacity, stating it has the ability to pull “near-infinite mass” while showing a video of the pickup pulling a Ford F-150 uphill. This coupled with the Cybertrucks impressive specs—the tri-motor version has a payload capacity of up to 3,500 pounds and a towing capacity of 14,000 pounds—suggest that heavy-duty trailer is the most natural fit.

But for travellers who’d rather explore the great outdoors sans cumbersome trailer, the marque also unveiled a new self-contained camper configuration for the Cybertruck. Judging by the image, it appears a tent can be attached and erected on top of the 6.5-foot-long bed to create sleeping quarters. Underneath this bed platform, there looks to be retractable bench space complete with an array of kitchen accessories.

While Musk did not mention the camper configuration during the initial Cybertruck presentation, Tesla has added the picture to its website along with the following caption: “From rugged to refined, Cybertruck is completely adaptable for your needs. Prepare for every experience with a versatile utilitarian design—including onboard power and compressed air.” The marque appears to be moving toward an off-grid electric mobile home system that is powered by a Tesla vehicle, and it’s not the only one. Earlier this year, electric rival Rivian revealed a similar camper configuration for its R1T electric pickup truck.

The Cybertruck can now be ordered through Tesla’s site. According to Musk, 200,000 have already been sold.