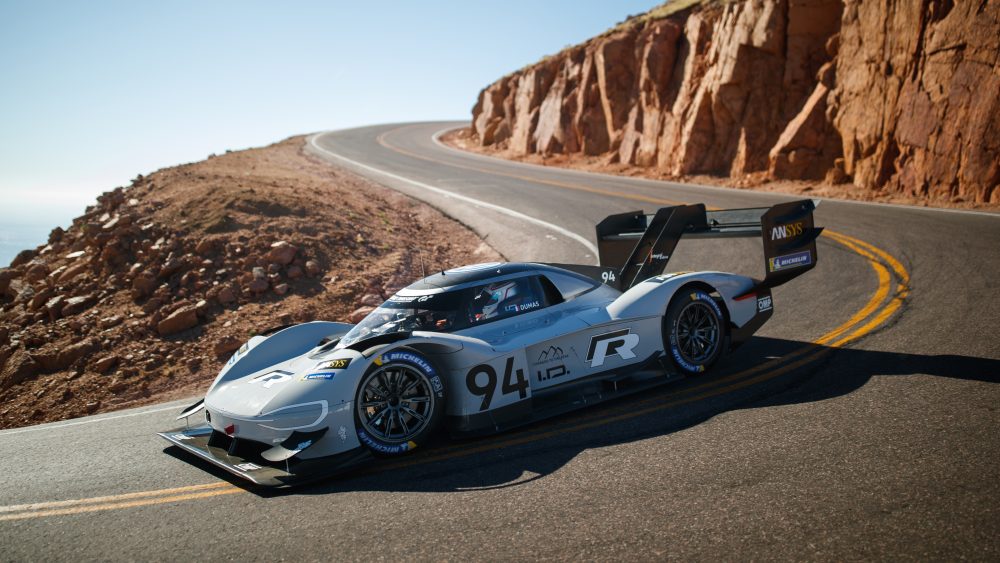 The Pikes Peak International Hill Climb in Colorado Springs is a litmus test for efficient automotive design and engineering, and the innovative, all-electric Volkswagen I.D. R has proven it has the winning chemistry. “In computer simulations, limiting weight was the obvious key to conquering Pikes Peak,” says Volkswagen I.D. R chassis project manager Cedric Delnatte. “Light weight, balance and grip to be fast on the corners.” With front and rear electric motors delivering 479 ft lbs of torque and about 670 electric-equivalent hp to all four wheels of this 2,425-pound racer, there were no concerns about power.

Delnatte’s corporate mission was an engineer’s dream: Design a performance car for the Pikes Peak Unlimited class, where anything goes if it passes safety inspections. The I.D. R follows patterns of Le Mans prototypes: carbon-fibre tub, alloy suspension and enveloping bodywork with no shortage of aerodynamic trickery. Battery packs are placed on the floor for a low centre of gravity, one alongside the driver on the right-hand side, the other directly behind it and well ahead of the rear axle line for chassis balance. Generating downforce at high altitude requires dramatic measures—the course ends above the clouds at just over 14,000 feet. The car’s visual signature is its cartoonlike dining table of a rear wing. The front splitter is nothing delicate either.

Last June, Le Mans–winner Romain Dumas saddled up and, ever so quietly, put the hammer down, climbing 4,720 feet and spearing through 156 turns in 12.42 miles. By taking the checkered flag a few seconds under eight minutes, Dumas smashed the absolute record of 8:13.878 set five years previously on the fully paved course by a Peugeot rally car. For perspective, a 2017 Porsche 911 GT3 R in the Time Attack class was driven by factory driver David Donohue and set a time about 100 seconds adrift of Dumas, at 9:37.152.

“No sound from the engine, no gear change, no rev band. At first the quiet is irritating,” says Dumas. “You are missing aural feedback. It is a visual experience of speed. You get used to it, and the sound of the electric front motor helps a bit. In hairpins, it is a challenge not to go down in tire smoke and wheelspin.”

The I.D. R has delivered engineering lessons about ultrarapid charging systems and keeping the batteries cool, as well as regenerative braking. These insights will inform VW’s unique electric motor design that will power a family of I.D. production cars scheduled to arrive in 2022, including the I.D. Buzz that electrifies and updates the look of the iconic “Kombi” microbus. By 2023, the brand will have invested around £26.3 billion in I.D. development.

In the meantime, the I.D. R may compete closer to home in 2019 as VW Motorsport will, supported by Bridgestone, attempt a one-lap EV record at Germany’s Nürburgring circuit.