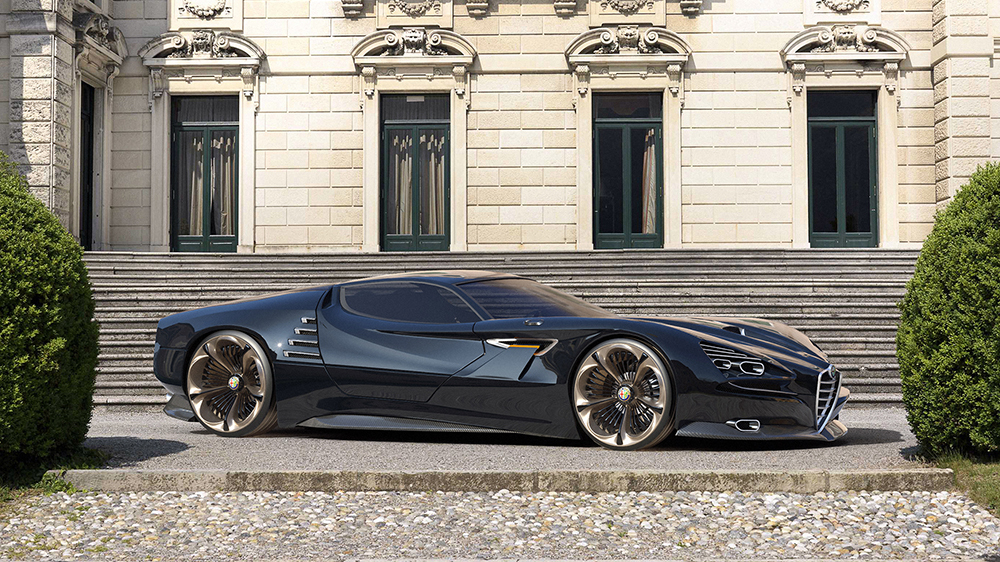 It’s the concept stage where automakers really let themselves have fun. Still, even the most daring brands could stand to take more chances. And if Alfa Romeo wants to add a supercar to its line-up, they might want to bring in Luca Serafini for some help

The Italian designer recently posted a striking set of futuristic renderings of one of the cars he’s most nostalgic about—the 1970s Alfa Romeo Montreal—online. Dubbed the Montreal Vision GT, the concept takes everything about the car that so deeply affected Serafini as a boy and turns it up to 11.

“Back in 1986 my father bought a shiny orange Alfa Romeo Montreal. … I remember the night he came home with quite irregular V8. He was parking in rear in the garage. The smoke was surrounding and the first things I saw were red taillights and chromed mufflers,” he wrote on his website. “As a young boy I can call it as the beginning for my growing love towards the whole automotive world”.

The first thing you’ll notice about the design is how sleek it is. While the car features Alfa Romeo’s trademark trianglular grille and badge and the general shape of the original 2+2 sports coupe, that’s where the similarities end. The designer’s updated concept features swooping, wave-like curves from front to back, headlights subtly worked into the grillework and large vents in the hood and side paneling to make things even more aerodynamic. While there’s no technical info given—presumably Serafini would upgrade the original’s 200 hp V8—it’s impossible to deny that this is one eye-catching ride.

“I tried to create subjectively something able to bring me back as a child. Something on four wheels that’s making you say WOW!” Serafini wrote.

Unfortunately, Serafini’s design, as beautiful as it may be, faces little chance of actually being made a reality. Still, Alfa Romeo need do little more than look at the response to it online to see that there’s an audience for such a sultry speedster.