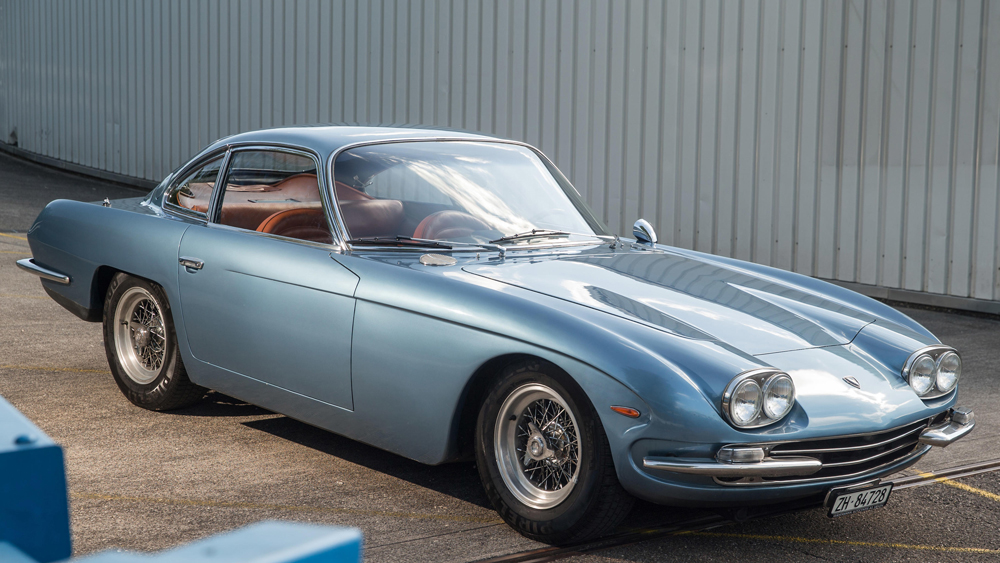 In the event that August’s Monterey Car Week auctions present too long a wait, the Bonhams sale at the Palace Hotel in Gstaad, Switzerland, on July 3 offers lovers of big 1960s-era GTs some interesting ways to scratch one’s itch for an old exotic. The sale even includes a few rare models from Monteverdi, Switzerland’s fleeting challenge to Italy’s finest.

Peter Monteverdi’s expensive, hand-built cars were in response to benchmark performers of the day from Ferrari, Maserati and Lamborghini, the latter being an upstart marque at the time that grew out of a dream of its founder, Ferruccio Lamborghini, in 1963. But Lamborghini hit the ground running, and by the fall of 1964 had sold its first production car, a V-12-powered cruiser called the Lamborghini 350 GT. By 1966, the engine grew to 4.0 liters and the car added two tiny rear seats to become the 400 GT 2+2.

Essentially the same as its two-seat predecessor, the 400’s underpinnings featured a four-cam V-12 engine designed by Giotto Bizzarrini and “civilized” by Lamborghini engineer Paolo Stanzani. In street tune, it developed about 320 hp, 50 hp more than the 3.5-liter engine, and boasted six Weber 40 DCOE side-draft carburetors, three more than Ferrari’s 330 GTC of the day.

The tobacco-colored interior includes an odometer showing about 87,000 km (just over 54,000 miles).

Stanzani’s Lamborghini colleague, Gianpaolo Dallara, designed the chassis, which was fine-tuned by factory development driver Bob Wallace, who test-drove every single finished car that came off the line. The body was a curvaceous-if-sober masterpiece by Carrozzeria Touring of Milan, who sadly went into receivership even before the final 400 GT 2+2 was built. The very last bodies were made at the Marazzi factory after the closure of Touring. Distinguishing between the 400 GT 2+2 and the two-seat 350 GT or 400 GT models requires a quick look at the rear window, which is much larger on the two-place cars. Quad headlamps replaced the odd one-piece units that gave the 350 GT its unique expression.

A radio and rare-for-the-day air conditioning were fitted from new.

Automotive press of the day lauded the engine, handling and comfort of the Lamborghini, generally regarding it as better made and more sophisticated than its competition. Notable is the way the smooth-as-silk Lamborghini engine can rev to 7,000 rpm and allows the classic car to top 150 mph. The vehicle can also lope around town at 1,500 rpm in fifth gear, then erupt with low-end torque in a way no other V-12 model can. The publication Road & Track, in its Road Test Annual for 1967, begins a review of the two-seat 400 GT with the headline: “One drive and everyone had a new favorite car,” and concluded four pages later by saying, “We don’t have contests at Road & Track, but if we did there’s no doubt that the Lamborghini would rate as the Grand Touring car we’d most like to have.” Fifty-five years later, that sentiment remains true for some of us smitten by the allure of the early Lamborghini GTs.

This example on offer at the Bonhams event is one of about 247 made from 1966 to 1968. It was delivered new to Switzerland, where it has remained with only two owners, the most recent keeping the car since 1968. With his passing, the car has remained with the family until the present time. It retains its original drivetrain and, unlike most examples, is in beautiful unrestored condition, wearing its original colour of Azurro Fiat metallic blue with a tobacco-coloured interior. A radio and rare-for-the-day air conditioning were fitted from new. Showing about 87,000 km (54,059 miles), it really is a time capsule of a car that was a favourite in 1967 and remains, for some of us, a favourite today. It’s estimated to cross the auction block for as much as £425,000.

All images courtesy of Bonhams