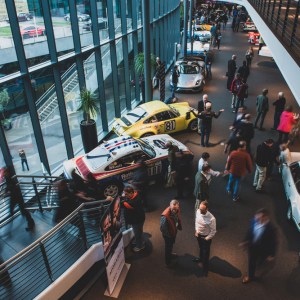 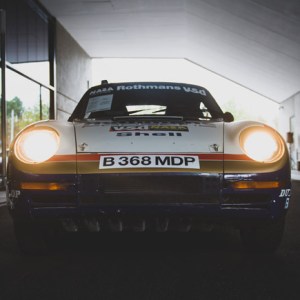 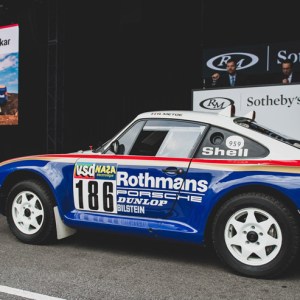 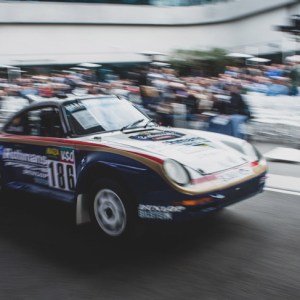 When the gavel fell recently at the RM Sotheby’s Porsche 70th Anniversary Sale, held—in partnership with Porsche cars North America—at the automaker’s U.S. headquarters in Atlanta, the price paid for a 1985 Porsche 959 Paris-Dakar rally car surprised many. At £4.5 million, the sum was roughly four times the value of a standard 959. But while casual fans of the marque might have been perplexed, the cognoscenti just nodded.

Chassis No. 010015 was just one of seven all-wheel-drive 959 supercars developed by the German sports car maker for rally racing. Of those seven machines, one was wrecked in-period, four are at the Porsche Museum, and two are in private collections.

Of those two, this 959—instantly recognisable in its iconic blue-and-white Rothman’s cigarettes livery—was driven in the 1985 edition of the Paris-Dakar competition, a desert race across northern Africa. Behind the wheel was three-time event winner Rene Metge.

An entrant in the 1985 Paris-Dakar race. Photo: Courtesy of RM Sotheby’s.

“It doesn’t get much rarer than this car,” says Dave Engelman, Porsche Cars North America spokesperson for motorsports and brand heritage. Engelman says the 959’s all-wheel-drive system and other technological innovations immediately made many 1980s supercars look old-fashioned. Call the 959 the first true hypercar, the father of the Carrera GT and 918 Spyder, and you wouldn’t be off base. But Porsche ran into an issue trying to showcase the car’s prowess from the moment it debuted in 1983.

“Helmuth Bott [renowned Porsche engineer] wanted the 959 to be all-wheel-drive from the beginning, but sports car racing regulations at the time didn’t permit it,” says Engelman. “So they looked elsewhere for competition validation.” Elsewhere was Africa.

In 1984, Porsche entered three 953 cars in the race and won outright. The examples used 959 running gear tuned for off-road abuse as well as naturally aspirated 911 Carrera engines. In 1985, Chassis No. 010015 and another two 959s tried to repeat the exploit but couldn’t deliver. In 1986, Porsche returned to Africa with turbocharged 959s and won. The Rothman’s 959 poster-boy status had been secured.

The running gear is tuned for off-road abuse. Photo: Courtesy of RM Sotheby’s.

“The 959 is looked upon internally [at Porsche] as the icon it has become externally for a few reasons,” says Engelman, going on to describe the car as the first street-legal Porsche supercar. He adds that the 959’s technological advancements in the areas of aerodynamics and engineering allowed the creation of a 911 variant that shut down critics who had turned up their noses at the car’s engine-hanging-out-the-back design.

“The 959 made an amazing street car, a legend in off-road competition, and even competed at the 24 Hours of Le Mans and the Rolex 24 at Daytona in 961 configuration,” Engelman says. “At the time of its development, the world’s economy had soured making the 959 a very expensive research and development project. But in some ways, this car now represents a solid foundation of what the company has become since.”