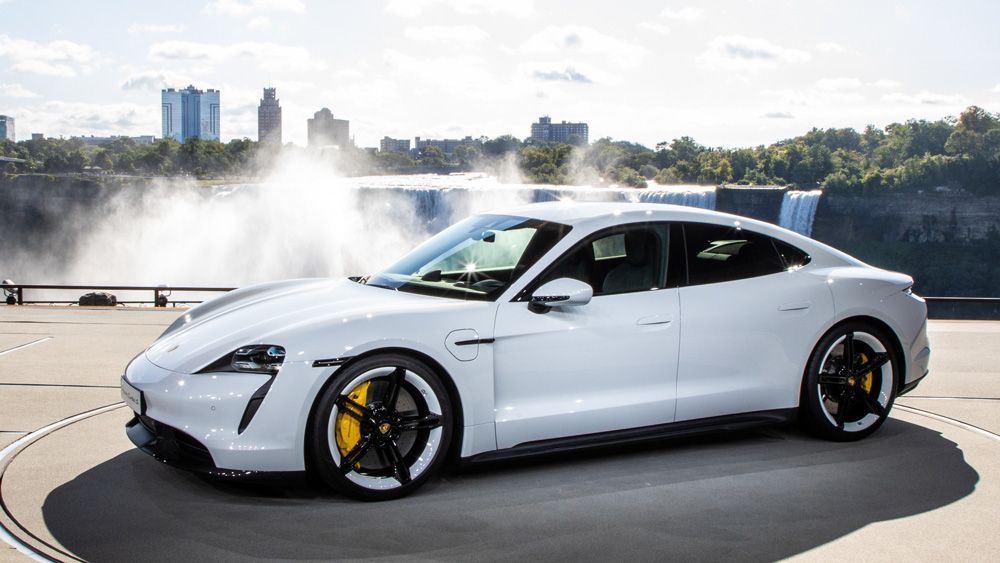 Niagara Falls in Ontario, Canada, was chosen as the locale for the North American reveal of the Porsche Taycan fully electric sedan with good reason: the ginormous hydro-electric power plant that resides there. It didn’t hurt that the Taycan looked imposing in the foreground of the press snaps either. It’ll likely garner attention wherever it goes, especially from whoever it quietly zooms past thanks to the eye-catching, futuristic design and some serious power-train engineering.

The Taycan is smaller than the Panamera, about the same size as a BMW 5 Series or a Mercedes-Benz E-Class, or even the car that it’ll henceforth be benchmarked against: the Tesla Model S. I got a test-ride in a Taycan around a Formula E track. Despite being thrashed around by a professional racing driver, I felt that the backseat was plush and spacious enough for my 6-foot-2 frame. The car was also fast as hell.

Underneath the floor is a skateboard containing a 93 kWh lithium-ion battery pack, which pushes energy to a pair of synchronous electric motors, one for each axle. The front axle receives a single-speed motor while the rear contains a two-speed transmission. For the quizzical, the first gear is for acceleration, and the shift point is around 62 miles an hour. While it’s pretty unusual for an EV to include a transmission, the point here is pure power and time will tell whether this will practically benefit drivers.

Onto the name. The base Taycan will be called the Turbo and some engineering tinkering will eke out more power for the Turbo S. As there is no combustion engine to which a turbo can physically be affixed, it’s silly to keep the conventional names, but Porsche is doing so because it believes customers can better equate the products to competitor vehicles. (Later next year, there will be a wagon variant, too.)

Both the Turbo and the Turbo S generate 616 hp, but an “overboost” function affords the Turbo bursts up to 670 hp while the Turbo S pushes 750 ponies to the wheels. The torque is 626 and 774 ft lbs respectively, which is good enough to propel the 5,121-pound beast from a standstill to 60 mph in 3.0 seconds for the Turbo and in 2.6 seconds for the Turbo S. While those numbers are more blunted than a Tesla Model S, Porsche would prefer you focus on the fact that the engineers were more concerned with making an all-around dynamic car with repeatable performance rather than a drag strip winner.

The Taycan Turbo runs with 670 horses and 626 ft lbs of torque. Photo: Courtesy of Porsche AG.

Porsche hopes for a range of 280 miles, though no official EPA numbers have arrived. It’ll likely clock in around 240 miles, and that’s a little bit of a bummer because the Model S can go about 50 percent further (370 miles) on a battery that’s only about 8 percent bigger. Perhaps to offset this, Porsche has imbued the Taycan with 800-volt charging systems, a giant nose-thumb to the norm of 400-volt systems in most other EVs. Still, the battery can only take about 270 kWh at its peak, though Porsche hopes to achieve 400-500 kWh as advancements in technology develop. For now, with optimal temperature and conditions, the Taycan can go from five percent charge to 80 percent in roughly 20 minutes.

The Turbo starts at around £139,000 (though the launch edition includes a glass roof and better charger) and the Turbo S will begin at £170,000. After launch, they’ll drop down to around £137,000 and around £167,500, respectively. Are they worth the money? Check back with us later this month after our first-drive review.