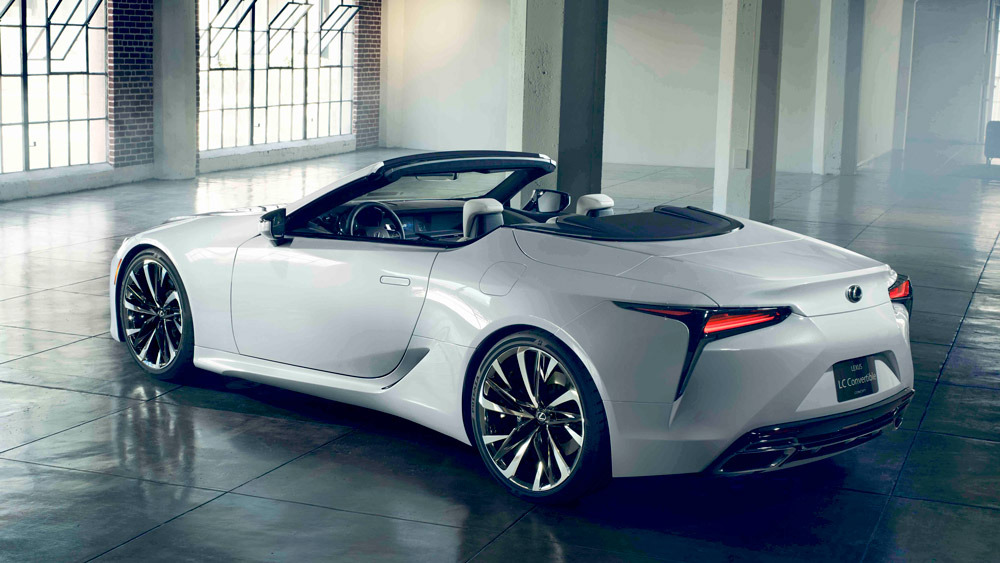 Anyone who ever gazed in slack-jawed awe at the original Lexus LC500 Coupe when it was first shown as a concept way back in 2012, surely thought, “Man, that would look great as a convertible.” Fast-forward to this year’s North American International Auto Show, opening to the public in Detroit this weekend, and that dream becomes reality with the unveiling of the exquisite Lexus LC Convertible.

For now it’s being labeled a “concept,” but surely it can only be a matter of when rather than if it goes into production. Our guess: by 2021. Sadly, the Detroit media unveiling earlier this week left a multitude of questions unanswered. First and foremost: what kind of top will it have? Despite repeated media probing, Tadao Mori, Lexus chief designer of the Convertible Concept, refused to be drawn into revealing what was beneath the car’s rear deck panel.

At first glance it appears as if there’s not enough space behind the rear seats to accommodate a folding metal top. Yet, Lexus designers and engineers may well have created a clever, origami-style metal roof that sits flat beneath the concept’s long rear deck.

After all, there is history to repeat here; the LC Convertible’s spiritual predecessor, the quirky SC430 that ended its nine-year production run in 2010, came with a folding metal lid.

The other big question concerns which of the LC500‘s power plants might the convertible use: that creamy-smooth 471 hp, 5.0-liter naturally aspirated V-8, or the more eco-friendly 354 hp, 3.5-liter V-6 gas-electric hybrid?

Our best bet would be the V-8, especially as packaging the hybrid’s lithium-ion battery pack might be a challenge—in the Coupe, the batteries sit between the shock towers where a folding top might need to go. But come 2021, the world may be much more eager for electric power.

For now, just gaze at this seductive drop-top with its flashy 22-inch rims and gorgeous white leather upholstery with gold accent stitching, and hope the concept becomes production reality. And soon.