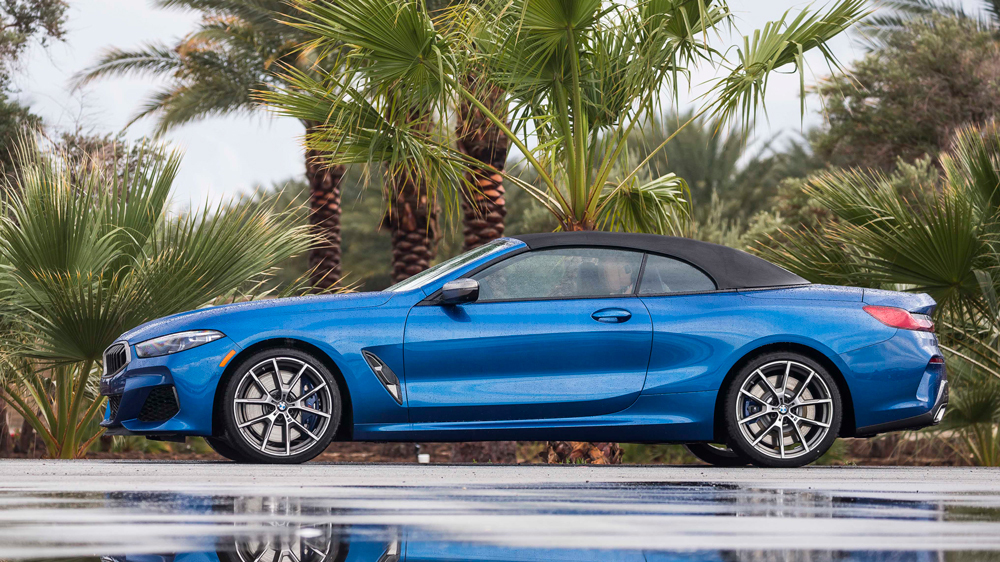 Skirting the edge of Southern California’s Salton Sea, you can see the Apocalypse in real time. Everywhere you peer there are signs of Armageddon-like decay; abandoned motels, pirouetting tumble-weeds, rusted-out cars and trucks. And the omnipresent aroma of dead fish. It could be a scene straight out of Mad Max 2: The Wasteland.

A perfect place then to sample the top-down delights of BMW’s new high-glam 2019 M850i xDrive Convertible. Sure, we could have cruised the Pacific Coast Highway from Malibu to Big Sur and smelled the roses. But been there, done that.

Of course, things weren’t always like this. In the 1950s and ’60s, it was dubbed the Salton Riviera and Californians flocked to the Golden State’s biggest lake an hour’s drive from ritzy Palm Springs. They came to swim, fish and soak-up rays. For a while, it attracted more visitors than Yosemite.

The BMW 850i xDrive Convertible. Photo by Howard Walker.

Then it all went pear-shaped. Salty, nutrient-rich run-off from surrounding farms began polluting the water, algae bloomed, fish started croaking. By the end of the 1970s, seaside communities like Salton City, Desert Shores and Bombay Beach had become ghost towns. Home-owners boarded-up and moved out, sun seekers never came back.

But we’ll tough it out. And if things get too noxious, the new droptop 8 Series has the power to make this four-seat convertible go like stink to get away. Time to point the BMW’s new, swollen kidney-grille south from Palm Desert, along Highway 111 through Coachella for a quick 113-mile loop of the salty Salton Sea.

The Salton Sea. Photo by CSNafzger/Shutterstock.

Team BMW has certainly done a fine job of morphing the latest 850i Coupe (£107,045) into this open-air Convertible. Top up, or top down, it has a slick, hunkered-down profile; the car’s high waist and raked screen making this broad-shouldered grand tourer look like its charging at a break-neck speed, even standing still.

As a convertible, it’s a cloth-topped marvel. At the touch of a button—either on the centre console or on the key fob—the multi-layer roof lifts or lowers in a mere 15 seconds, and at speeds up to 31mph. Raise all four side windows, pop-in the standard mesh rear wind-blocker, and there’s hardly a rustle of air in the cockpit, even at triple-digit speeds.

The top comes down as we pass through Mecca and catch our first glimpse of Salton Sea in the distance. It’s huge; 35 miles long and 15 miles wide, though environmentalists predict that it’ll shrink by two-thirds over the next 30 years. We pull over in what’s left of Bombay Beach. At 227 feet below sea level, this is one of the lowest spots on the planet.

The roof raises or lowers in 15 seconds, even when the car is moving 31 mph. Photo by Howard Walker.

Another cool feature is the folding rear seat backs that really add versatility and practicality to the car. Flip forward the 50:50-split backrest and there’s room to stash a couple of golf bags or thread longer stuff through the decent-sized pass-through into the trunk. With the top up and the drop-down trunk divider raised, there’s a usable 12-and-a-bit cubic feet of space back there.

The leather-lined cabin itself is a fine place to be, even amid such mildly depressing scenery. The front seats are beautifully contoured and nicely huggy, and the look, feel and quality of the trim is terrific.

Mechanically, this new 8 Series Convertible follows on from the 8 Coupe by offering just one engine—BMW’s sublime twin-turbo 4.4-litre V-8. It’s good for 523 hp at 5,500 rpm, and 553 ft lbs of torque from just 1,800 rpm. All that considerable punch is channelled to all four wheels courtesy of a super-intuitive ZF 8-speed automatic.

Of course, the beauty of being in a place not too many people want to visit is that the roads are mostly empty. Perfect for stretching the convertible’s legs. And stretch they do. Dial-up Sport or Sport+ mode and the shifts get faster, the engine more responsive. You even get a few macho tailpipe pops and crackles when you come off the gas.

Zero to 60 mph is reached in 3.8 seconds. Photo by Howard Walker.

The rear-biased all-wheel drive helps get the 4,736-pounder off the line beautifully, and on to 60 mph in 3.8 seconds. While that’s 0.2 secs slower than the 258-pound-slimmer coupe version, you’d never know it, so plentiful is the torrent of thrust. Top speed for both cars is the same electronically limited 155 mph.

While the 850 Convertible always feels the big, hefty grand tourer, its bulk is disguised by the car’s precise, playful steering, a transmission that’s masterful in always being in the right gear, and four-wheel steering that really heightens the car’s agility. This is just a lovely car to drive; fast, super-refined, smooth-riding and beautifully balanced.

As we park on the crunchy beach on Salton Sea’s west shore, gazing across a sandy spit at gorgeous high-peaked mountains across the lake, we wonder what might have been. This so easily could have been another Tahoe, a true Salton Riviera. Then you smell the fish. Next time we’ll head to Malibu; the convertible 850i will feel more at home there.