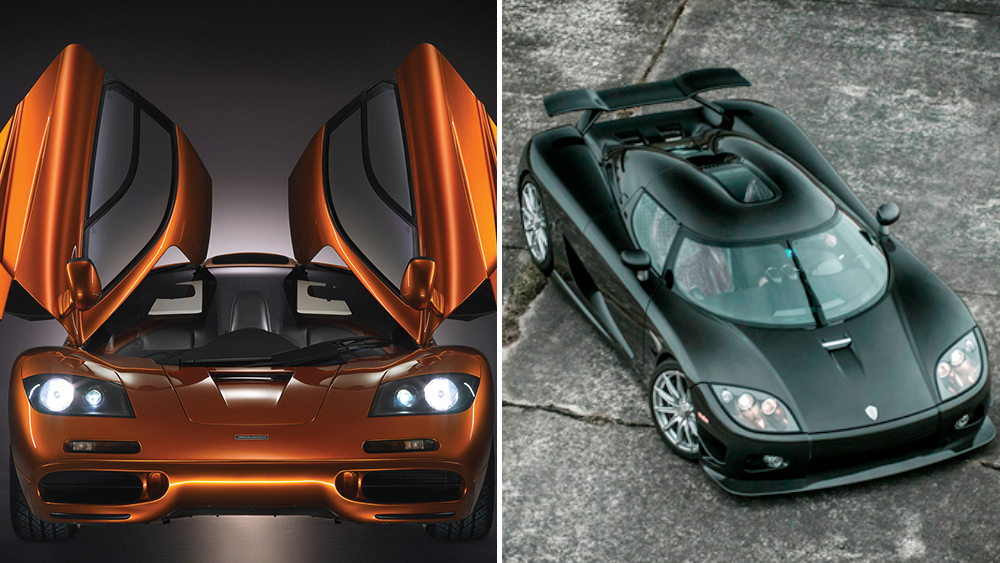 The first production vehicle to crack 200 mph was the Ferrari F40. The year was 1987 and immediately after that Italian stallion’s speedometer registered 201, the race to the 300 mph club began. Some 20-plus years later and only modified supercars, like this 2,500-horsepower Ford GT, have reached the promised land. We’re still waiting for a production car to arrive, with the likes of Hennessey, Koenigsegg and Bugatti leading the charge. In the meantime, here are the fastest production cars currently out there in the world. (One quick editor’s note: our floor for consideration is at least 230 mph, otherwise this list would be exceedingly long.)

The successor to the game-changing Zonda, the Huayra comes from Italian speed master Horacio Pagani and is named after Huayra-tata, a Quechua wind god. Fitting considering the 720-horsepower comes from a twin-turbocharged Mercedes-AMG V-12 (the only non-Mercedes-AMG production vehicle to receive a mill from the Affalterbach madmen). A seven-speed, single-clutch gear box puts down the power while delivering chunky, whiplash-inducing shifts, allowing you scream from zero to 60 in a mere 2.8 seconds.

The iconic three-seater from McLaren was a game changer from the brilliant mind of its creator, Gordon Murray. First built in 1993, it was the first carbon fibre-bodied production car ever built, and featured a 6.1-litre V-12 from BMW that was good for 618 horsepower and 479 lb-ft of torque. For the then-expensive, now-bargain price of £500,000, you were rewarded with blistering speed: zero to 60 in 3.2 seconds and zero to 100 mph in 6.3 seconds. Simply astounding performance figures, especially when you factor in the engine being naturally aspirated (the only such engine on this list). When it officially set the world speed record back in 1998, the 240.1 mph run remained top dog until 2005 when the Koenigsegg CCR bested it, by one mile per hour.

The CCXR uses the same 4.7-litre twin-turbo V-8 mill as the CCX, but the Swedish company modded the powerplant to run on E85 race gas, which shot the power from 795 horsepower up into the four-figures – 1,004 horsepower to be exact. Given the CCXR’s upgraded aerodynamics package and engine, it’d be interesting to see how it would perform in proper top speed run that’s in a straight line, and not on a circular track (which is how the aforementioned CCR ran).

While the 2020 successor to the F1 is still being built and has yet to be delivered to a customer, at least one test mule (named Albert!) exists, so we’re including it. The rear-wheel drive Speedtail employs a hybrid system good for 1,035 horsepower, and its sleek shape and lightweight carbon fibre construction is tailor-made for its top speed of 250 mph. McLaren claims it’ll take only 12.8 seconds to go from a dead stop to 186 mph, which is an eye-watering stat.

The 2007 Shelby Supercars Ultimate Aero TT has a Guinness Book of Records verified top speed of 256.18 mph. That record has since been broken, but that doesn’t take anything away from this fully carbon fibre-bodied behemoth. Power comes from a twin-turbocharged Corvette C5R V-8, tuned to produce more than 1,100 horsepower and 1,094 lb-ft of torque. The rip to 60 is 2.7 seconds, and stopping this land missile is aided by twin air brakes that pop up from the rear wings.

While Bugatti bosses said they wouldn’t do a top speed run (and instead just did a 0-250-0 mph sprint), one owner hit up Johnny Bohmer Proving Grounds in West Palm Beach to see the 1,500 horsepower Chiron realise it’s limited top speed of 261 mph. The speedometer goes up to 310 mph, though, so undoubtedly the 2018 Chiron can go must faster, but the folks at Bugatti blame the factory-installed governor on tyre limitations.

Here’s yet another Bugatti, this one built back in 2010 for the sole purpose of securing the accolade of fastest production car ever built. And the Veyron Super Sport achieved it, according to Guinness. From the same W-12, engineers managed to eke out an additional 180 horsepower, bringing the grand total to 1,184 hp. To unlock the potential for max speed, you’ll need a second key that’ll give unfettered access to the engine.

John Hennessey’s eponymously named performance group is obsessed with power and speed, as evidenced by shoehorning as much oomph as it can into other company’s production cars. Then Hennessey built his own supercar in 2014, powered by a 7.0-litre twin-turbo GM V-8 packing 1,244 horsepower and 1,287 lb-ft of torque. The Venom ran a 270.4 at the Kennedy Space Center’s 3.2 mile landing strip, but only in one direction. Since both directions are required for a record-holding run, in addition to a production volume of 30 or more cars (only 13 Venoms have been sold), the Hennessey doesn’t qualify for official record books. But still, the beast has surpassed 270, and that’s impressive as hell.

Back to Koenigsegg for the top honours. In November of 2017, a Koenigsegg Agera RS running E85 (meaning it was getting 1,360 horsepower) was driven by a factory driver to a two-way average speed of 277.8 on an 11-mile strip of closed road in Nevada. The car, owned by a customer who suggested the feat, actually hit 284.5 mph during the record attempt, which is staggering. It also nabbed the fastest 0-250-0 time (33.2 seconds), and the highest average speed during the flying kilometre (268 mph) and for the flying mile on a public road (276.3 mph). Watch for yourself below this still.