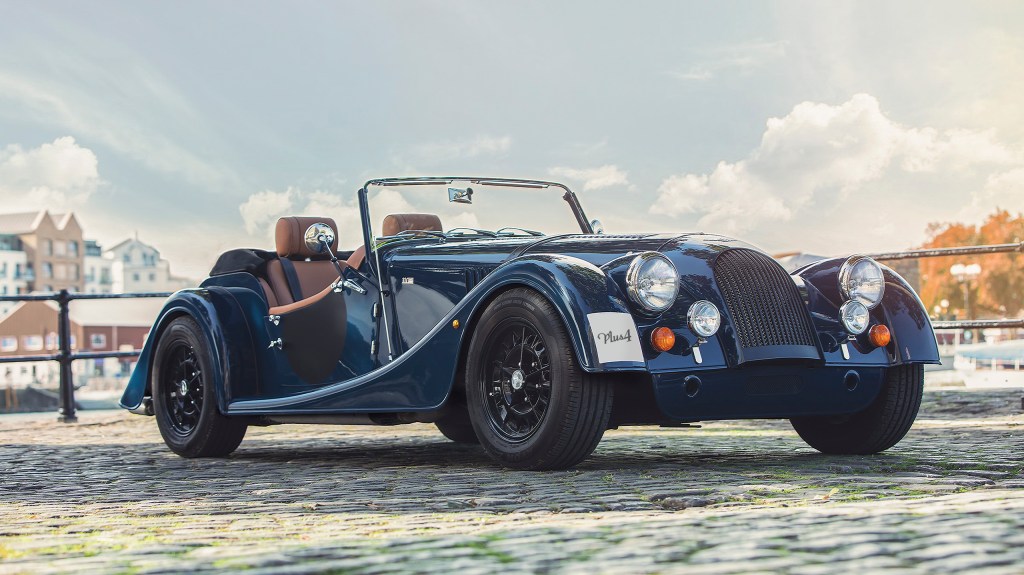 It’s when stationary – and stationary will normally be, along with the rest of the traffic, in the daylight hours on the thoroughfares of South Kensington on a weekday – that the Morgan Plus 4 draws the most appreciative gazes from passers-by. It’s a crisp Winter morning and Robb Report UK, having experienced a host of super-slash-hypercars of late, has decided to indulge in a compare-and-contrast exercise, by taking a Morgan Plus 4 – the British family-run car marque’s flagship model – on a jaunt from the capital to the south coast.

The conspicuousness in question derives from the noise, humming through the vehicle’s hand-built chassis, from the two-litre, four-cylinder Ford powerhouse that’s coupled to a Mazda five-speed manual gearbox beneath the Plus 4’s elegant, sweeping shell. This is a vehicle that coughs and splutters in anticipation when still; sings in an impatient baritone at 30; hits its stride with a happy, orotund bark around 60 – which won’t be achieved on this journey until the A21, somewhere around Sevenoaks – and lets out a roar of exhilaration when cruising at 15mph or so shy of its 117.4mph top speed.

With the onset of electric cars potentially threatening one of the visceral joys of combustion-engine motoring – the high-rev roar, a factor so enticing it sees men in the early 20s drilling holes in the mufflers of their Peugeot 205s – the Plus 4’s unashamed sonic limelight-hogging has emotional, as well as aural, resonance in spades.

It would take a either a curmudgeon or a dogmatic modernist to question the vehicle’s exterior elegance; especially in profile, when those wire wheels, low-slung, sweeping body and a bonnet perhaps three times the length of the cockpit all conspire to achieve timeless, albeit unapologetically nostalgic, Bertie Wooster-esque elegance.

The aforementioned boy racer contingent of modern motoring might be less impressed with the interior, though.  Which is to Morgan’s design team’s credit, truth be told, but also a bit of a shame as the nimble-bodied would certainly look more graceful than this writer getting in and out of it.

Everything inside serves as a reminder that this Plus 4 is very little different to those that would have been nudged out of the brick sheds in Malvern in the 1950s – from the chrome-on-leather dials to the minimal controls (starter button, gear stick, handbrake, horn, fan, windscreen wipers, lights, heater, indicators and very little else) via the miniscule field of vision afforded by a not-quite vertical windscreen, through which the driver can squint, nervously, as those generous arches flanking the iconic, elongated bonnet threaten to take out bollards and pedestrians.

As driving experiences go, it’s exactly that – a driving experience. You have to roll with the bumps and jiggles; you have to recalibrate your spatial awareness to accommodate being in control from the back end of the vehicle; you have to listen to what the car is communicating to you – via the steering, via the suspension (leaf spring at the rear, sliding pillar at the front), via a noticeably weighty clutch.

Which is all surprisingly refreshing. This a car that makes your realise that your instincts for real driving – for responding to surfaces, for thoughtful gear choice, for considered stopping distance assessment, for deft steering, for just about everything connected to using your quadrupedal dexterity to propel forward a 927kg object on thin wheels with 154bhp at your feet – have become dormant – rather like the survival instincts of a long domesticated cat – thanks to years of traction control, anti-lock-breaking, power steering and other technologies that have enhanced comfort while depleting the sheer whoopie factor of getting behind a wheel. Autonomous vehicles, you may find yourself arguing at pub tables after a jaunt in a Morgan, have essentially been with us since the late-80s.

But that’s the whole point. As well as the archaically charming aesthetics and the human touch (Morgans are still hand-assembled and the Plus 4’s body is mounted on a hand-crafted ash frame, just like the original three-wheelers of 110 years ago), these cars are all about driving “with unfiltered feedback”, as Robb Report UK’s motoring correspondent Mike Duff puts it in our current print issue. Comfort and practicality are anathema, so much so that the lack of boot space (there’s roughly room in the back for a folded windbreak) almost feels like a brand statement: you’re driving this in order to go somewhere, not to get somewhere else (T.S. Eliot, Gautama Buddha and the writers of motivational bijous for wall-posters would certainly approve).

It’s unlikely the Plus 4 will be made for much longer – rumour has it that the next model range will be scaled-down versions of the Aero, with aluminium chassis and modern suspension – but we fully expect Morgan’s unabashed devotion to archaic production values to continue in earnest. As the first glimpse of the English Channel homes into view, those round headlights now piercing the dusk, an old English platitude, popular among older generations, comes to mind: “They don’t make ‘em like they used to!” It’s cliched, but it’s true. And God forbid Morgan ever gets the memo.