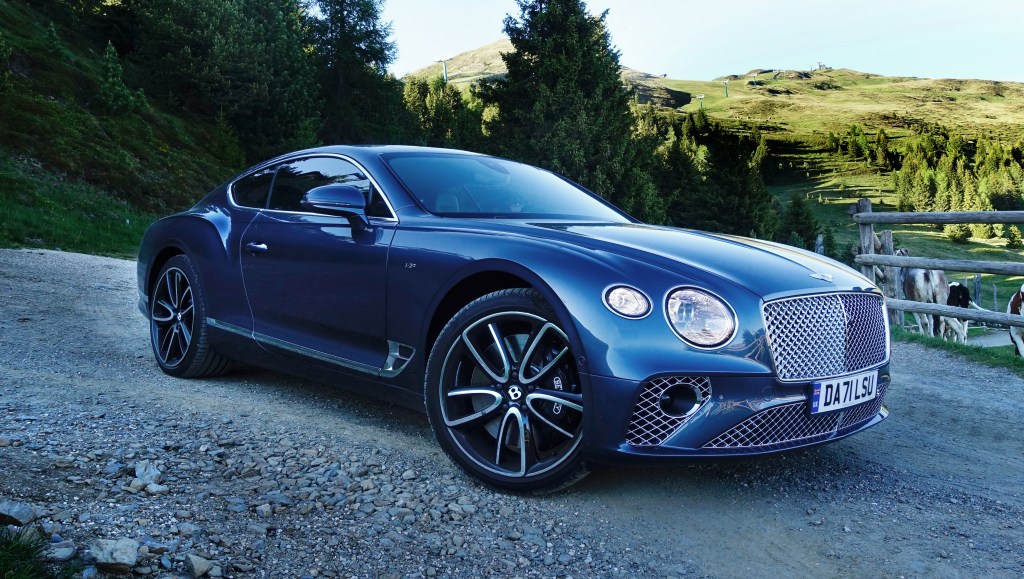 You won’t find it in the handbook that comes with the car, but it seems that if you rock up at a five-star hotel in a Bentley Continental GT V8, the proprietor will rush out and offer to park it for you.

This, at least, was my experience on rolling into Forestis, high in the Dolomites, having spent the previous three hours at the helm of Bentley’s magnificent machine. No slavering bellhop eyeing up the keys – only the beaming owner. Surely, I said with perhaps a little too much British fluster, he had someone else to do this sort of thing for him? No doubt he did. Just not today.

I might not have been so astonished. Unlike my usual holiday rental, Bentley’s imperious 4.0-litre twin-turbo grand tourer is no futtering jalopy. On the journey north from Verona, as the baked stone houses of rural Italy gave way to the newspaper-hatted chalets of the Tirol, there had been countless swooners casting a longing gaze over its lucid form. Few cars have such road presence.

Mind you, few cars are as enormous. Despite its two-door arrangement, the Conti GT remains the Titanic of the tarmac. You could walk round the Isle of Wight quicker.

Brobdingnagian proportions have always been part of the Conti GT – and Bentley’s – appeal. As has its promise of speed. Despite its five-metre length and formidable girth, the V8 can properly shift. It climbs to 60 in under four seconds and, should you find a piece of road long enough, will keep going to a smidgeon under 200mph (yes, ever so slightly disappointing), all the while transporting its occupants in palatial splendour.

So much of its magic is that you can tell it’s rapid, even before you get in it. Want to know what it sounds like when you hammer the throttle and 542 horses kick in? Well, just look at it

Alternatively, drive one through a Tyrolean tunnel with the windows down. Childish, yes; brazen, absolutely. And also very, wonderfully loud. There are faster cars, but as so many of them now come with boots loaded with lithium, few have the wit to entertain in quite the same way.

And certainly, few cars weighing in well over two tonnes will do so without causing so little concern, either. Amped up with 48v electronics snatched from Bentley’s Bentayga luxury SUV and air suspension, and aided by that epic wheelbase and grippy Pirelli P-Zeros, the Conti GT V8 always feels so glad to be on the road, cornering or no. Heavyweight sportscars don’t punch any harder.

In the cabin, Bentley has lost none of its ability to flower a sense of tradition with petals of modernity. Mine had acres of palm-soothing black Brunel and Beluga leather, which did the craft bit, and lashings of carbon fibre, coated and buffed to a high-sheen, which did the high-tech bit.

There are toys, too. And, in the truest sense of luxury, not all are strictly useful. One button spins the central dashboard display, flipping it from digital to analogue and then to a blank slab of carbon fibre weave. Something to do at the lights, perhaps, should you overcome the temptation to sit there revving the engine.

That’s the thing with the Conti GT V8, recently face-lifted for the second time since its launch three years ago. On the one hand, it speaks old-school, poshing it up with its flawless coachbuilding and quilted upholstery. And then on the other, it’s a total hooligan, ready to remind you with just a dab of the throttle that it’s a tyre-shredding muscle car that will burn through transcontinental miles with glorious, thunderous, preposterous velocity.

Which makes it an awful lot of fun. And pricey. Kitted out with more than £50k’s worth of extras (including £11k 22-inch rims and a delicious £4k ‘Meteor’ blue paint job), mine topped the scales at almost £205k.

It also makes it the Bentliest of Bentleys. Sure, the Bentayga may be plumping the Crewe coffers more, but the Conti GT, V8 or otherwise, is what defines the marque – and what makes grown men go weak at the knees. Would that hotel proprietor have been so quick to grab the keys had I been driving a Bentayga? Or even a Flying Spur? Somehow, I doubt it very much.

For more information about the Bentley Continental GT V8, visit bentleymotors.com. With thanks to Mauro Vittorio Benetti at Bentley Padova.