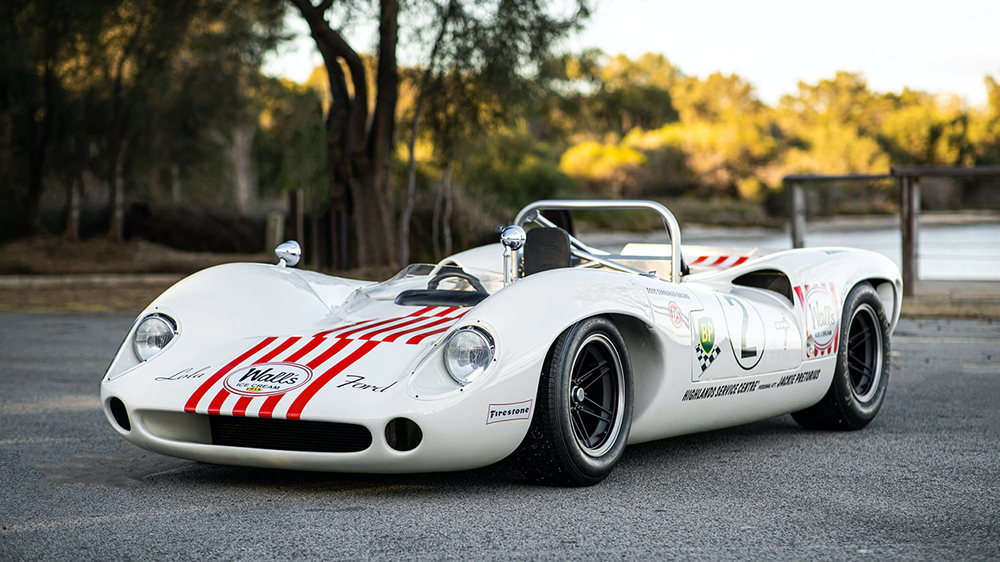 You could argue that every genuine Lola T70 is considered rare and valuable. After all, the British marque only made around 100 such race cars throughout the ‘60s. There are, however, a few that stand head and shoulders above the rest.

A MK1 Spyder currently listed on Collecting Cars is just such an example. It is one of only a handful to pack a Ford V-8 under the hood. It also comes with impeccable racing pedigree and ties to Hollywood.

The Lola in question made its debut at Silverstone in ‘65, before it competed in multiple races under the ownership of David Good. Most notably, it was driven by Roy Pierpoint in the 1965 Brands Hatch Guards International Trophy. It was then taken to South Africa for the Sunset Series and raced in the 1965 Kyalami 9 Hours.

The elegant four-wheeler took a break from the track in early ‘66 and was used as a camera car for the filming of Steve McQueen’s unfinished Formula 1 movie Day of the Champion. The racer was reportedly driven by Sir Stirling Moss, Sir John Whitmore and McQueen himself at the Nürburgring. There’s even footage of the car in Alex Rodger’s recently released documentary Steve McQueen: The Lost Movie.

After a brief brush with fame, the Lola was picked up by South African racer Doug Serrurier in 1967. Serrurier raced it extensively in his home country and nabbed multiple victories. After a long and successful race career, the car disappeared for many years and lost some of its parts. The current owner snapped it up 13 years ago and set about restoring it to MK1 specifications, with guidance and key components provided by Chris Fox of Fox Racing Developments.

Today, the rare antique ride is powered by a period-correct 4.7-liter V-8 built by Dick Savy, which has only been run for dynamometer tuning since being rebuilt. Based on a Ford 289, the mill is mated to a Hewland LG500 four-speed manual transmission that has only been run for approximately six hours.

In addition to a new body and chassis equipped in February, the car was recently painted and is in excellent condition. The interior was also fully revamped and shows next to no wear. Of course, you can still expect all the period-correct instruments and gauges.

With one day left on the sale, the T70 is sitting at roughly £120,000 at the time of publication. Best get those bids in.